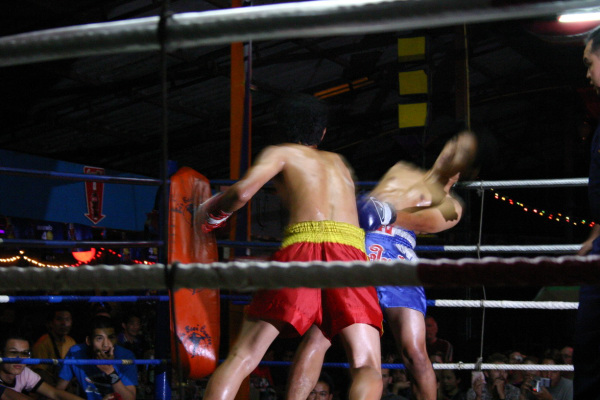 [Editor’s note: To celebrate Matador Network’s acquisition of Glimpse.org, we’ll be republishing some of our favorite Glimpse articles over the next few weeks. This story, “Everyone Wants to Watch the Foreigner Fight” originally appeared on Glimpse.org in October of 2007.]

The hulking Thai man clapped his boxing pads together and repeated loudly, “Round three! Come on!”

I was spent, rounds one and two having totaled eight minutes of full-on kicks and robust punches. But my sturdy opponent remained unfazed. Though his weathered face and sagging belly betrayed his age of 50-odd years, his limbs were rock-solid. Now I was hanging on the ropes, sweat pouring off me. I definitely didn’t feel like going for round three. 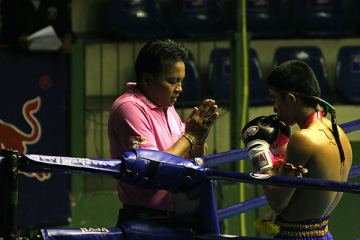 Somsak was an impressive sight. Dark-skinned, with a fading tattoo of a dragon covering one shoulder, his past exploits in the boxing arena were clearly etched into both his body and his pride.

He was a former middleweight champion, and with his boxing shorts hiked up high and a fading Beer Singha T-shirt, he was a living, breathing, toughened-up Thai version of the trainer from Rocky. This was the man who was teaching me Muay Thai, a form of kickboxing unique to Thailand and considered an expression of national pride.

It all started with an innocent request from one of my students, Jayin, who asked me to come and learn Muay Thai with him after school. During my initial introductions, I discovered that the extent of Somsak’s English was limited mostly to boxing terms. He strapped a large red pad around his waist and fitted two smaller blue cushions to his forearms. Clapping these two together with a sharp snap, he looked at me with a devilish glimmer in his eyes.

I started by giving my best imitation of a Van Damme kick, which elicited a series of friendly laughs from the assembly of students eagerly watching the foreigner trying out their national sport. Somsak grabbed my right leg and held it straight, telling me to stand on my tip-toes with my left foot. He then swung my leg through the correct arc, but I was unable to maintain my balance and ended up in a sweaty heap on the floor.

Despite the language barrier, in time Somsak proved to be a very effective coach. He showed me the proper way to do something by actually doing it to me, not taking into account the fact that I wore no pads and that I usually had no idea he was about to hit me. Needless to say, I learned quickly.

Thailand is a Theravadist Buddhist country: Children at my school vow each morning to be dutiful and obedient, and the people are known worldwide for their gentle smiles. Still, Somsak informed me with all seriousness, and even a touch of glee, that he had in fact sent an adversary to the hospital for two weeks.

In round three, I had about 10 good repetitions before Somsak switched to practicing blows with the knees. He announced this change in strategy by giving me a sneaky knee to the ribs, which caught me solidly enough to make me wince.

I continued through the routine, moving from knees to elbows and back to kicks, dodging Somsak’s return blows and occasionally scoring a solid hit that sent him sprawling. When we finally finished with 10 rapid-fire kicks from each leg, I stumbled to the corner, feeling very satisfied for the day, and thinking of nothing more than a gallon of water, some fried rice, and bed. 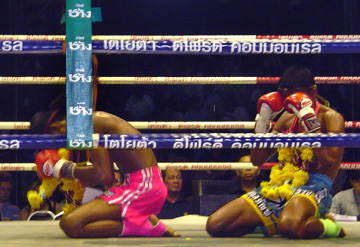 Then I heard Somsak calling my name and detected a note of excitement in his voice. I looked and saw a stocky Thai strapping on oversized boxing gloves and a protective helmet. Somsak held similar gear out for me, a jagged smile splitting his face.

Apparently, Moo, a local, had had enough of merely watching this foreigner and wanted to prove his mettle. I was dead-tired and Moo was bouncing around on happy feet, but I figured I had no real choice.

With the facemask blocking my vision and the puffy gloves hanging loosely from my hands, I stepped up and signaled that I was ready to begin. Immediately, he began dancing around the ring, bobbing and weaving and throwing little half-punches.

This realization was only reinforced by my opponent’s neat sidestep of my first punch, followed by a quick blow to the side of my head. We continued for the next minute, with me landing one blow to every three from Moo, while I wondered when Somsak would let me hang up my gloves. Finally, it dawned on me that I was leading with my left every time, and Moo was making the exact same dodge in response. I switched my stance, tossed a throwaway right and watched the unsuspecting Thai walk right into my left hook.

Moo crashed to the floor, and Somsak stepped in, declaring the fight over. I was rewarded with assorted cheers from Nu and the rest of the kids, and a hug from Moo, who apparently had no hard feelings. Much to my own surprise, I had respectably defended my boxing reputation—at least for today.

If you’re interested in how the world fights, read Fight Like Water: Lessons From a Brazilian Jiu-Jitsu Master, on Matador Sports.

Tagged
Outdoor Thailand
What did you think of this story?
Meh
Good
Awesome

The 11 hardest, most dangerous mountains to climb in the world
For the perfect day of hiking and Colombian coffee, head to Jardín
The best backcountry ski lines in Rocky Mountain National Park
The most sustainable and thoughtful gift ideas for the whole family
The 20 most Instagrammed waterfalls in the world

Thailand gives back to heroes