WATCH CLOSELY. Now watch again. There, see it? At around the 1.18 mark, just as he’s about to clip himself to the bolt, he almost slips. After he does make the clip and pulls himself over, the look on his face describes his feeling perfectly. 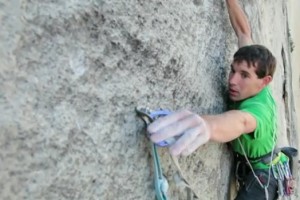 Alex Honnold is a free solo climber. That means he doesn’t use any safety gear when he climbs…no ropes, no harness. Although in the above video he is using some gear. But he just became the first person to link up Yosemite’s Mt. Watkins, El Capitan, and Half Dome, going 95% free solo. It took him 18 hours 50 minutes over June 5 and 6, 2012. So, yeah, I guess he can be excused for using a few bolts here and there.

I’m relatively new to climbing. I’ll lead a 5.9 no problem, perhaps a 10a. But even then I can get freaked out if I’m above the last bolt and struggling to find the next hold. If I fall, yeah, it might hurt a little. But I certainly won’t die. Not like he almost just did.

Tagged
Climbing California, United States
What did you think of this story?
Meh
Good
Awesome