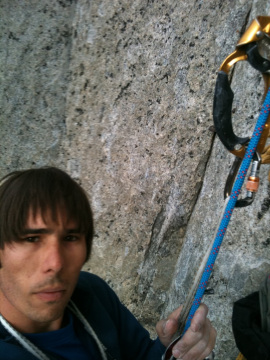 SINCE LAST FALL, Jorgeson and big wall master Tommy Caldwell have been attempting to free Mescalito, a 37-year-old aid route that they believe could be El Cap’s hardest climb. After waiting out the winter, the two returned to Yosemite on March 16th, and on Saturday began trying the last unexplored pitch on Mescalito, the Molar Traverse.

The project is a big change for Jorgeson, who is better known for putting up risky highball boulder problems like the 35-foot-high The Beautiful and Damned (V13). On a break from the wall, Jorgeson told Matador via email about Mescalito, the Molar Traverse, and why he’s committing to El Cap.

Q. Where are you two now? Still up on the wall, or are you back on the ground?

A spring storm has come in for a few days, so we are resting on the ground at the moment. As soon as the weather clears, though, it’s back up on the wall!

Q. According to your blog, you and Tommy tried on Saturday to free the Molar Traverse, the last unexplored pitch on the Mescalito line. How did it go?

The Molar Traverse, and all the pitches leading up to it, are definitely possible. All the moves have gone. The Molar Traverse is certainly 5.14, as is the pitch prior, but it’s all there. This is very exciting to us as we now know with certainty the difficulty of each pitch of the route. Mentally, this really helps with grasping the true scope of the project.

Q. How many of the route’s pitches have you and Tommy sent? Could Mescalito feasibly see a ground-up, no-falls ascent in the near future?

There’s so many, I don’t know. We have pitches 1 – 6 pretty dialed. 7 – 12 are all 5.14 but one. We haven’t sent these pitches in their entirety, but have definitely done all the moves, or each pitch in major sections. This is a major, long-term project. Who knows when it will get done? But it will get done. The style will likely be a week-long push from the ground up, with a few rest days on the wall.

It would be so easy for there to be a 10-foot blank section that makes this line impossible, but there isn’t.

Q. Now that you’ve tried all of Mescalito’s pitches, what do you see as the biggest obstacles in solving the line?

There are several big obstacles. First is the fact that the line has so many hard pitches. As of the last count, there are 7 pitches of 5.14, 7 pitches of 5.13, and the rest is 5.12. The style of climbing is extremely technical, so you must know the exact sequence of each crux. This means we have a lot of memorizing to do! Logistically, we are writing down every piece of gear we use on every pitch, in order. This way, we only take the necessary weight up each pitch.

Q. This line was your first El Cap climb, right? A lot of climbing publications have said that El Cap free climbing is a stagnating scene. In your opinion, what’s the future of El Cap climbing?

This is my first El Cap climb! I’m kind of diving head first into El Cap free climbing. It’s been a bit like jumping into a cold river at times, but I’m adapting my style, learning a lot, and feeling like the project is more and more feasible. 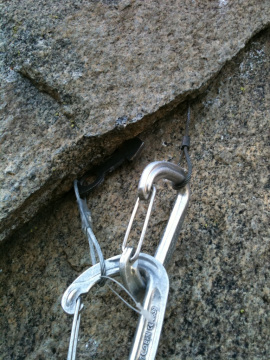 I’m definitely not an authority figure able to speak on the nature of El Cap free climbing, but I think it will be hard to find a route as consistently difficult and clean, yet possible, anywhere in the world. Granite is very particular. The line between impossible and extremely reasonable is very fine.

Who knows what the future of El Cap free climbing is? For now, I feel like Tommy has found it with Mescalito, and I’m honored to be working on it with him. It takes incredible vision to look at this section of wall, believe that it’s possible, and put in the work to see it through. Tommy put 3 years of work into this project before I even joined him, so the task has been, and remains, massive.

Q. What about your future? Any post-Mescalito projects you care to share with us?

Honestly, this is my future. Mescalito is all I can think about right now. It’s all-consuming. If I don’t focus all of my energy into it, I won’t succeed. I don’t have the background of El Cap free climbing that Tommy does. I’m having to change my climbing style a lot to adapt to this new challenge. I love it, but it requires that I focus all of time and energy on this. I wouldn’t have it any other way!

Tagged
Climbing Interviews California, United States
What did you think of this story?
Meh
Good
Awesome