Ever since I began canoeing, at age 16, my head has been filled with paddling routes. Dream trips and bucket lists with the names of classic Canadian rivers. Above all, I liked to think up long routes that connected multiple watersheds. The best canoe trips always cross a height of land. 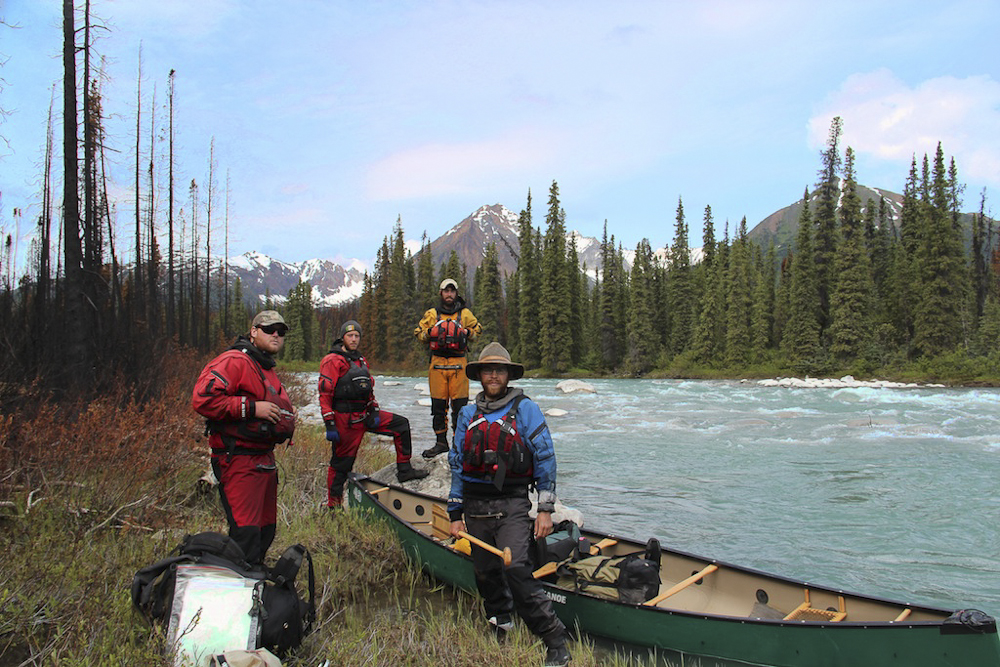 I developed a habit of looking at maps like people look at puzzles. The challenge is to get from point A to point B. To do this I have a few clues, such as well-known rivers and waterways — then it’s up to my imagination to do the rest of the work.

One day I was working on one of these puzzles. I was curious if one could canoe from the Alaskan coast, across Canada’s northern territories, to the Hudson Bay. I pieced together rivers, wrote emails, looked at maps. The major obstacle would no doubt be traveling up the Rocky Mountains in a canoe. I looked into some waterways and convinced myself it was possible. In a matter of hours I had traced a route that spanned ocean to ocean and crossed the Rockies. It was the grandest canoe route I’d ever devised.

But it was a dream of a dream. I had no idea when I would be able to do this trip, or if I would ever do it. It might not even possible. When I told my sometimes paddling buddy Winchell Delano of the route, his reply was that we had to do it. The thought of actually setting out on this immense dream seemed absurd. But Winchell pushed it into reality. We got to planning, recruited two more friends and fellow paddlers, sorted out logistics, and on May 8th, 2012, Winchell Delano, Steve Keaveny, Matt Harren, and I set off on our 2,600-mile, 130-day expedition. 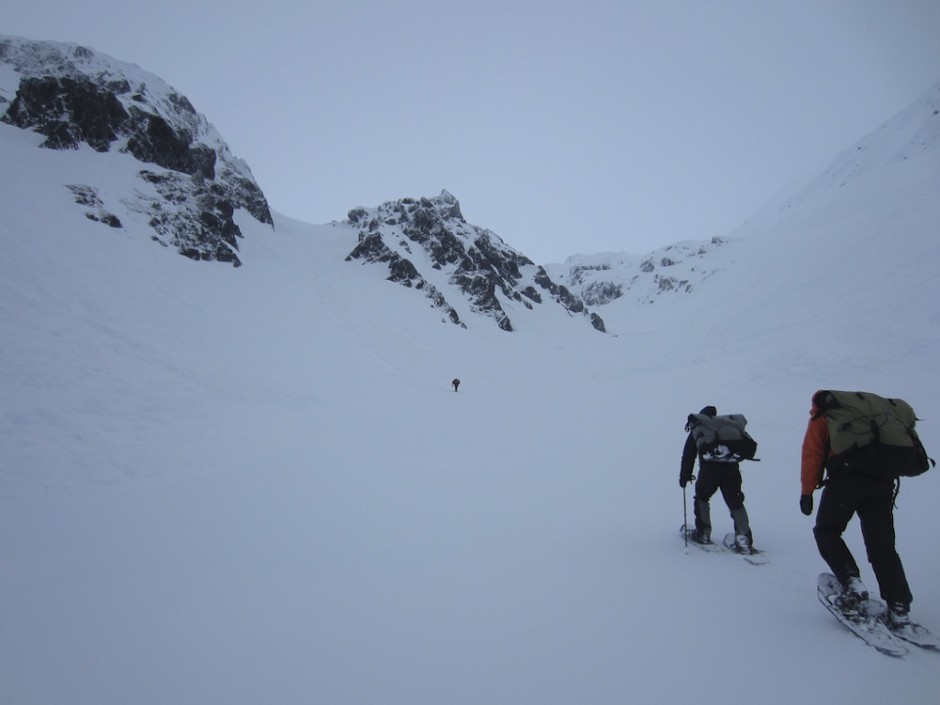 Up the Golden Stairs

The canoe expedition began without canoes. Our two boats and paddling equipment waited for us on the other side of the mountains, at the headwaters of the Yukon River. To reach them, we hiked through Chilkoot Pass, following the same route thousands of gold miners traveled over a hundred years ago. As we climbed, we floated on top of 25 feet of snow, climbed over avalanche-scarred slopes, and sneaked by the Canadian customs office, which was unmanned and buried in snow. 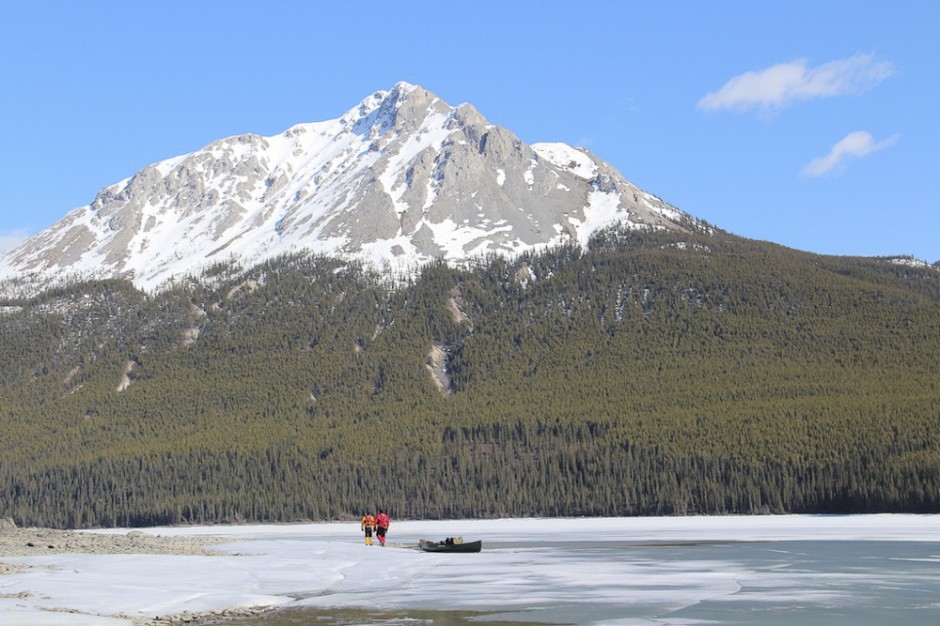 After a week of trekking through the mountains we arrived at our canoes, excited to paddle. But this wouldn’t happen. The series of lakes that compromise the headwaters of the Yukon were clogged with rotting ice, too thick to break or paddle through, but too brittle to be able to stand on. We were equipped with Kokatat Expedition Drysuits, which allowed us to move over the unstable ice and stay dry despite the many times we broke through. 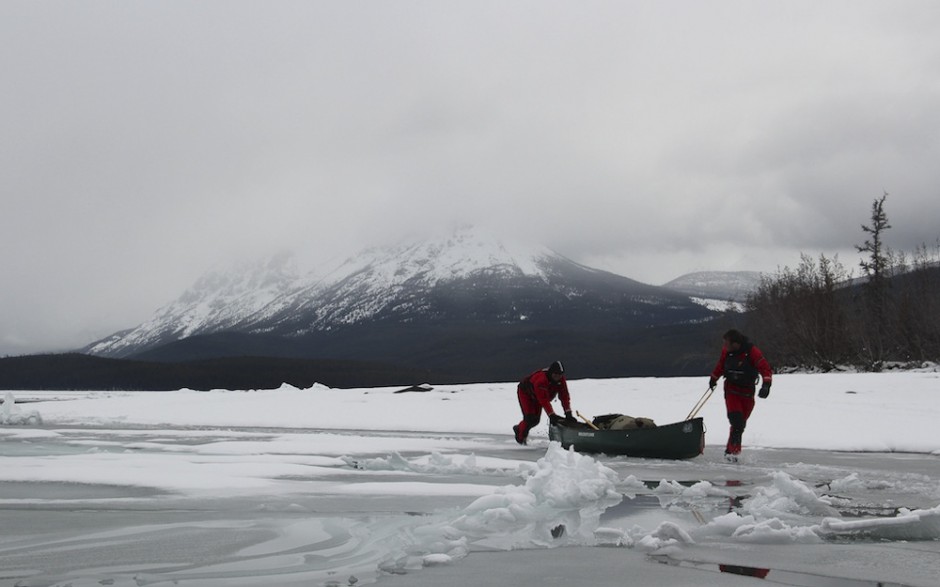 In planning the trip, I knew we had a small window in which to complete the route. Like the Marines, we had to be first in and last out. That meant starting too early and ending late in what was a gamble against the first storms of winter. Nine days into the trip, we woke to twelve inches of snow. This considerably slowed our progress. In the coming week we reached the Yukon River proper, which was free of ice and had a current that swiftly propelled us to where the major challenge of the expedition awaited. 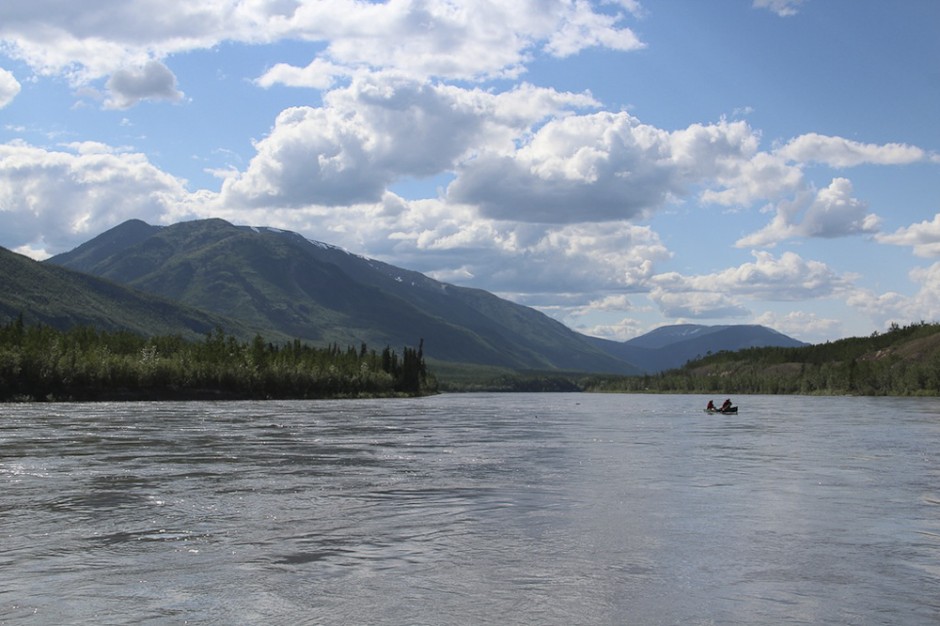 Going up the Pelly

From the time I first envisioned the route, I knew that the most difficult part of the trip would be paddling upriver to ascend the Continental Divide. I did not appreciate how difficult this would be until we began our journey up the Pelly River. We were working against a river that flowed at a continual five miles per hour. We became engaged in an absurd task, and over and over we would ferry back and forth across the river, searching for that brief stretch of slack water in the inside bend. 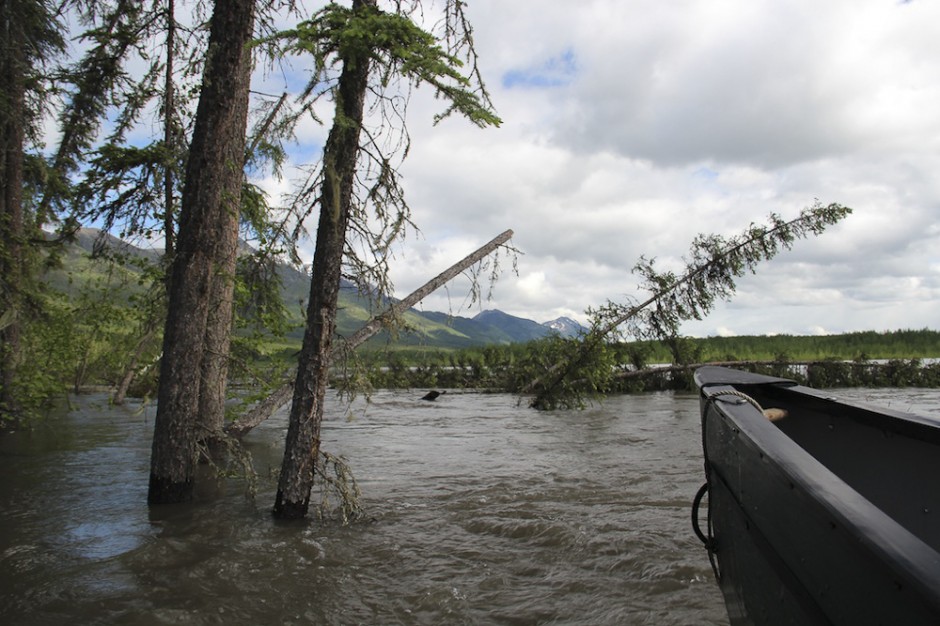 When we began, snow beautifully capped the surrounding mountains. Now that snow was melting. Each night I put a stick in the water line and by morning the water had risen 4-6 inches. Shorelines disappeared and forests were swallowed by the river. Needless to say, this only made traveling more difficult. 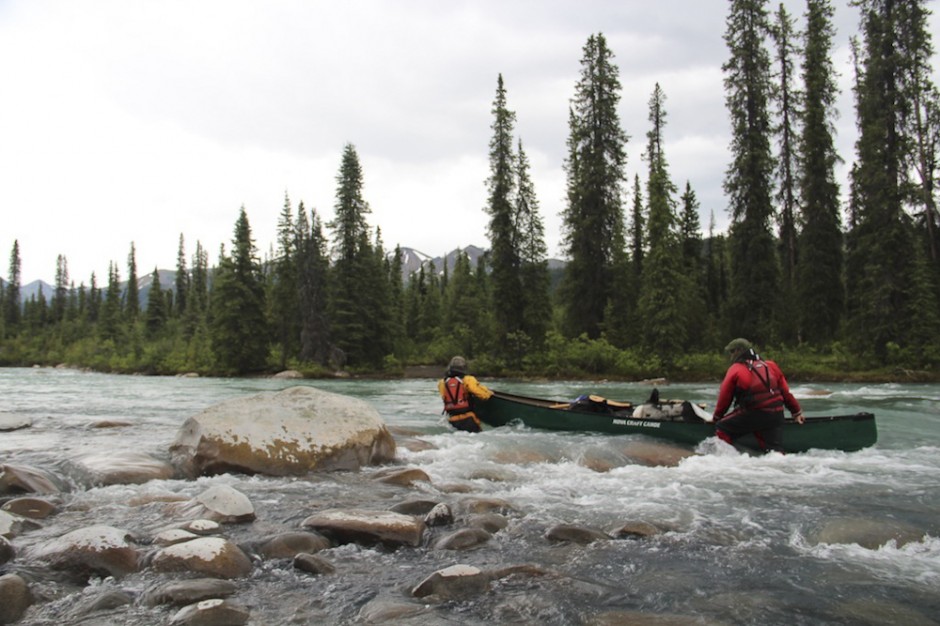 After 25 days on the Pelly, we turned north on its tributary, the Ross River. Though the Ross had significantly less water, it was much steeper. Most of the days were spent out of the boats, walking through rock-strewn rapids and maneuvering up violent whitewater. 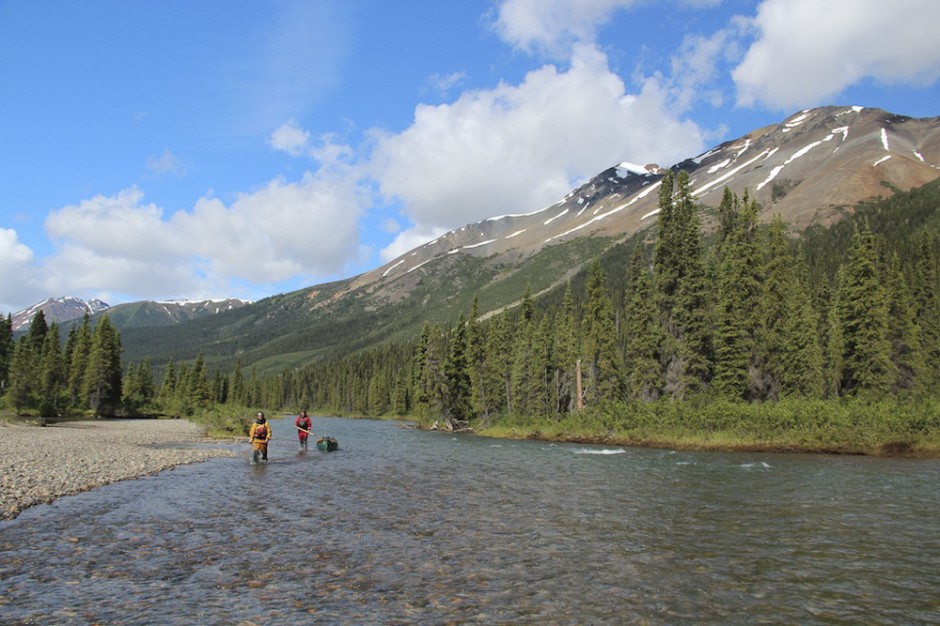 Progress slowed. We were counting on making at least ten miles a day, and these were hard-earned miles. But as we traveled deeper into the mountains, the river became steeper and we struggled to make six or eight. 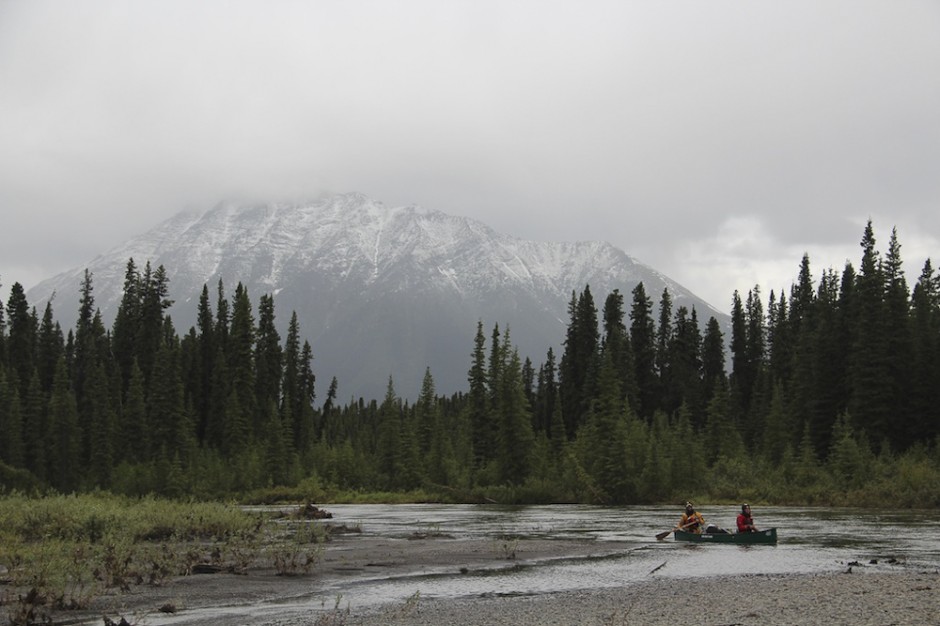 As travel became more arduous, the weather deteriorated. We went to sleep in the rain and woke up in the rain. Temperatures dropped to hover just above freezing, and a wet cold shot through our bones. What’s more, we plunged in water that 20 hours before was frozen in a glacier or a snowfield. The slow, cold travel was wearing us out. But each day we were getting closer to the Continental Divide, where gravity would begin to work with us. 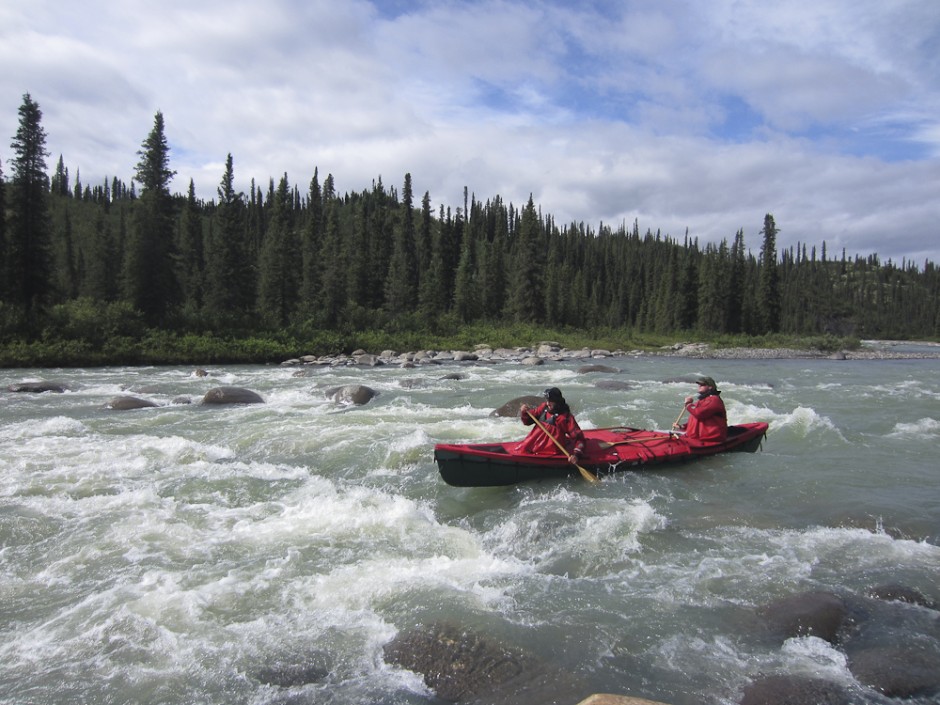 July 10, 2012, was one of the best days of my life. It was the day we portaged three miles over the Divide and reached the headwaters of the South Nahanni River. Not only were we about to go down one of the most famous and beautiful rivers in the world, but after 43 days of upstream travel, we would finally be going downstream. The upper Nahanni, pictured here, was 50 miles of nearly continual Class II-III rapids that dropped at an average of 30 feet per mile. 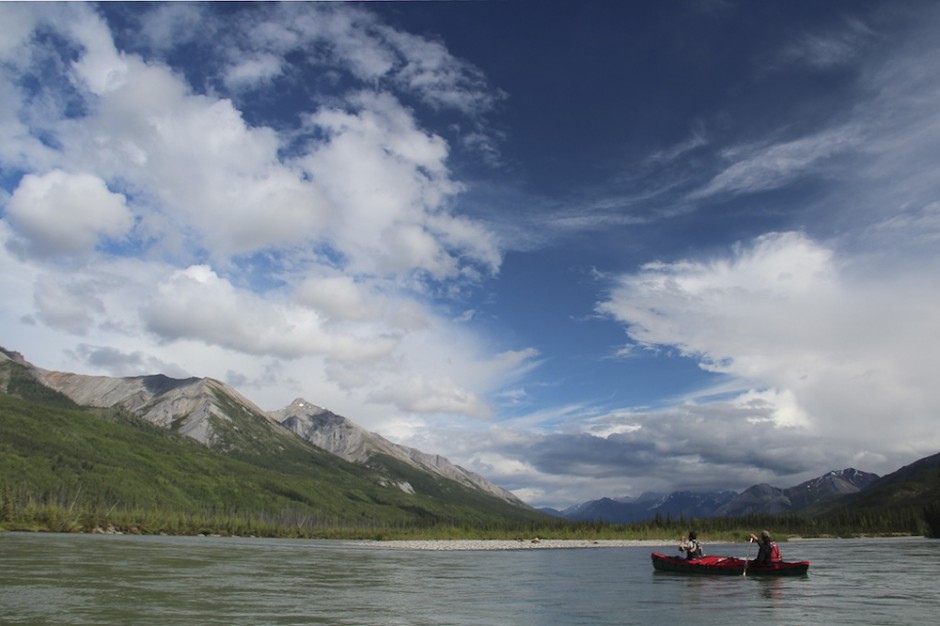 After three days of big whitewater and an exhausting amount of adrenaline, we followed the South Nahanni into a splendid mountain valley. The river is justifiably famous and on most every paddler’s wish list. Relative to northern rivers, it is crowded with raft and canoe parties. As Steve said, a lot of extravagant praise has been lavished on the Nahanni, but all that praise falls short of just how incredible the river is. 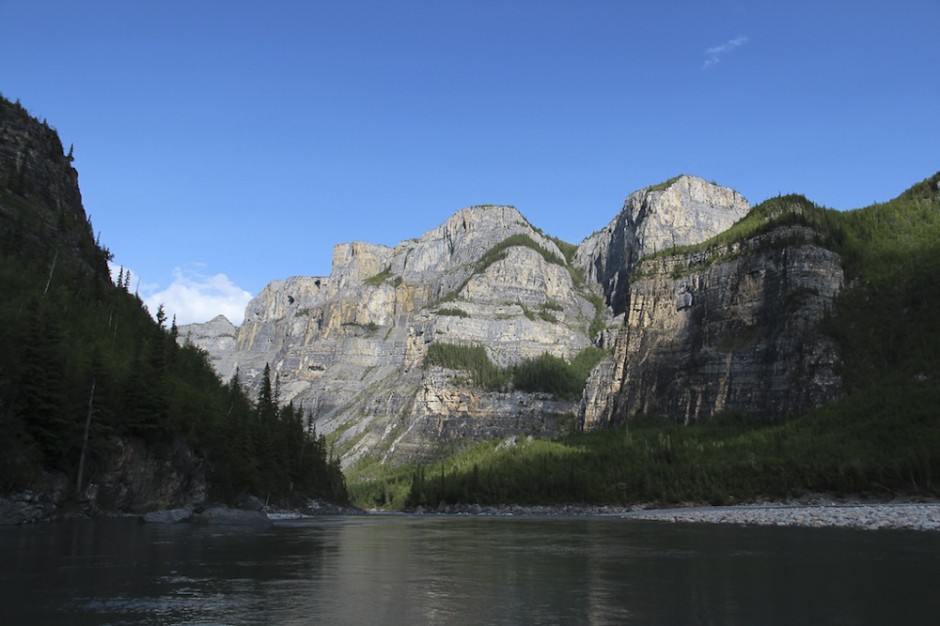 After Virginia Falls, which at 300ft is twice the height of Niagara, the South Nahanni courses through a series of canyons. For us, the river was all the more majestic because it had taken us 58 trying days to reach. The Nahanni revived us. It renewed our sense of why we were out here and fortified our determination to successfully complete the route. When we paddled off the Nahanni it was almost August, and we still had 1,300 miles to paddle. 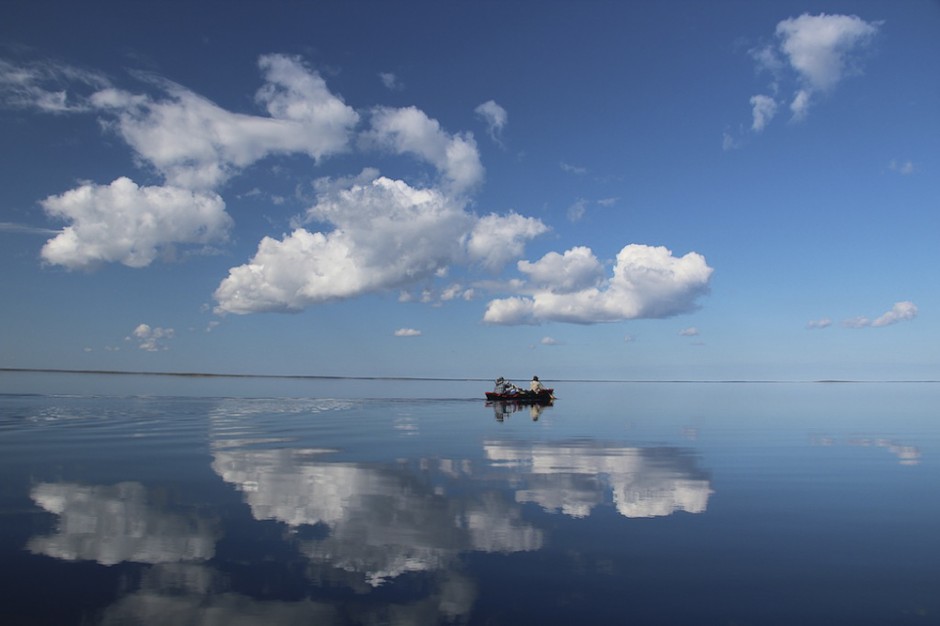 We left the Nahanni and the mountains for the flat, mid-continental forests. A featureless landscape of mud and big water. We made our way to the Great Slave Lake, the tenth largest body of freshwater in the world. We paddled the entire east-west distance, over 300 miles. Ocean-sized swells can whip up in a matter of minutes; alternately, the lake can turn completely still and settle into a mirror-like calm. 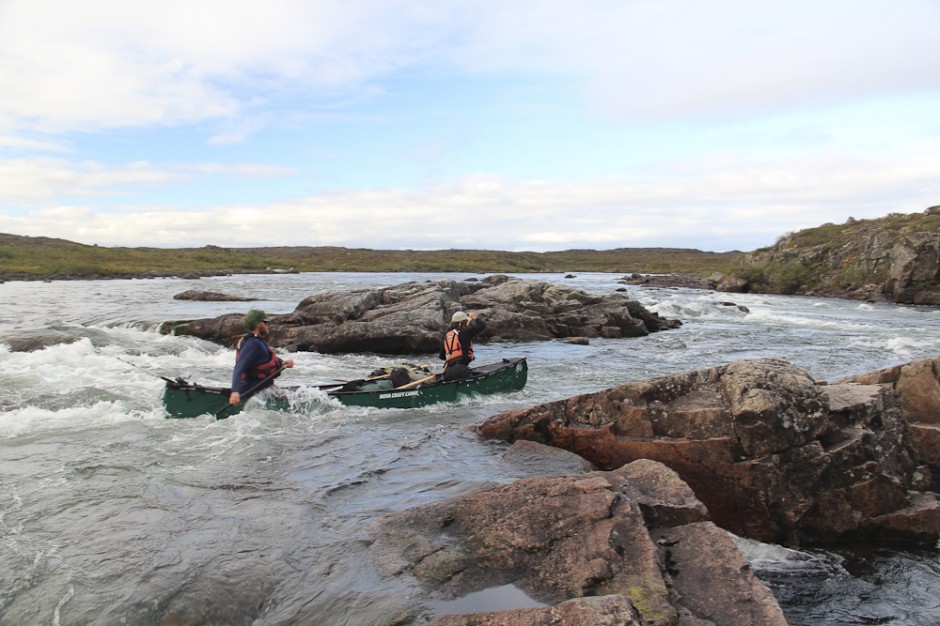 Into the barren lands

From the eastern shores of the Great Slave Lake we portaged into the barren lands. Late in the season, the temperature dropped sharply and we were under a constant threat of a storm that could very well last through winter. 109 days after setting out, we portaged onto the Hanbury River. This was the third and final height of land on the route. The Hanbury flowed into the Thelon, and the Thelon into Chesterfield Inlet on the Hudson Bay. After going up and down, then up and down again, we could finally say it was all downhill from this point. 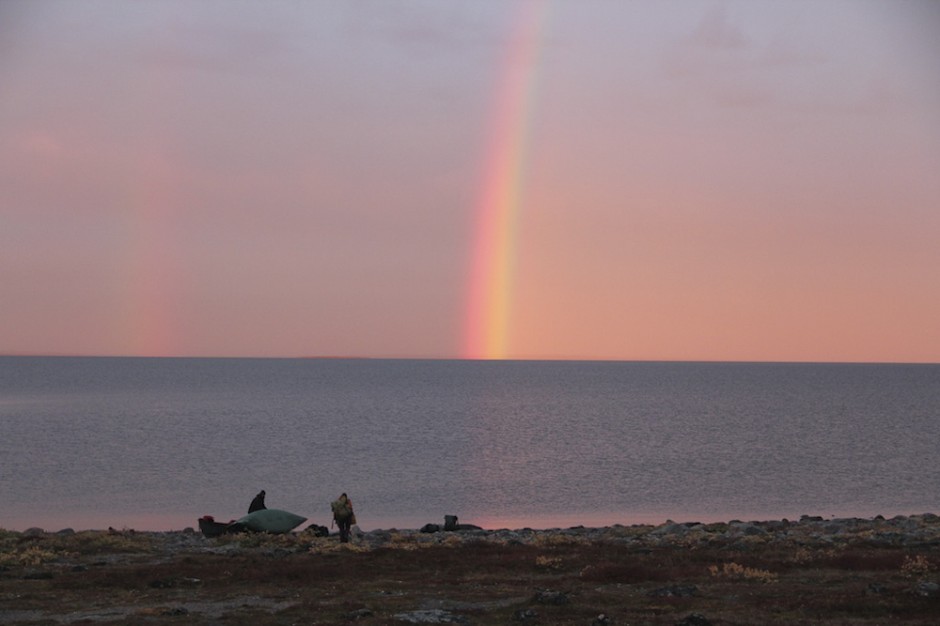 In the second week of September, we paddled 200 miles through Chesterfield Inlet. The land was bright, draped in the reds and yellows of fall and the frost of the coming winter. 100 miles from the bay we encountered 14ft tides. We woke before the sun rose and set up camp in the dark. The weather held and we made long days, which after 125 days on trail meant sore hands and the ever-sore butt. On September 14, 2012, we paddled over the swells rippling off the bay and arrived at the small town of Chesterfield Inlet. For the last time we got out of our boats. The trip had come to an end. 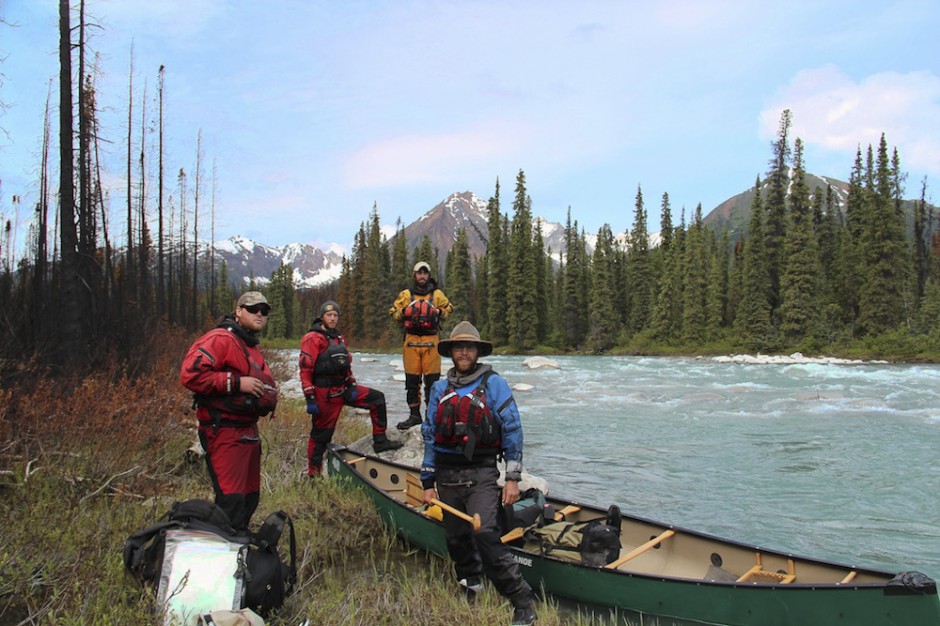 The boys on the Ross River

Tagged
Paddling Canada
What did you think of this story?
Meh
Good
Awesome

A 480-mile trekking route is now open on Vancouver Island

The 10 most unique places to go kayaking in the US

Rafting the Zambezi on the scariest whitewater rapids in the world

5 ways to spend your day on the water near Phoenix