AFTER A WEEK following a scripted itinerary around the region, I just wanted to be alone.

Saskatchewan has 100,000 lakes but only one favourite beer: Molson Old Style Pilsner. I loaded up my kayak with a six-pack and my current read, In Search Of Captain Zero by Allan Weisbecker, and headed out on the canoe route to Grey Owl’s cabin just north of Kingsmere Lake.

I’d never heard of Grey Owl until I visited Prince Albert National Park’s visitor center, but his story intrigued me. Archibald Belaney adopted the First Nations identity Grey Owl after abandoning his career as a hunter and trapper to become a conservation advocate. He was the Dominion Parks Branch’s (now Parks Canada) first naturalist, and for the last years of his life in the 1930s he wound up living in a log cabin on Ajawaan Lake, one lake north of Kingsmere.

He also managed a successful writing career, penning three bestselling novels and 35 articles for Canadian Forest and Outdoors magazines. He drank like a writer, and was often found throwing back in Waskesiu, despite living what Parks employees now call “a 7-8 hour paddle and two portages from town.” 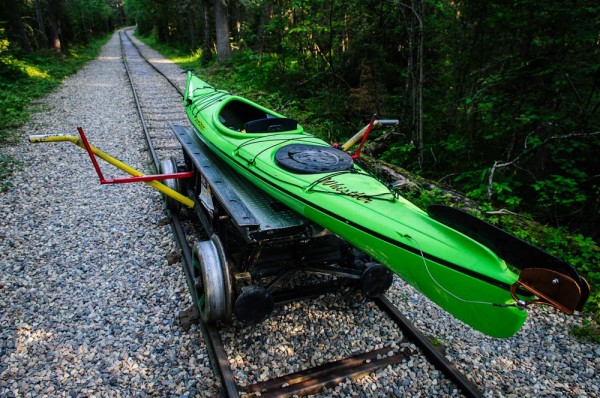 I hauled my kayak out of the Kingsmere River to begin the portage to the lake. Although I’d learned how to portage a canoe on my shoulders in northern Saskatchewan, Prince Albert National Park has a unique system that uses steel pushcarts along an 800m railway between Waskesiu and Kingsmere Lakes. This makes it possible not only for canoes and kayaks but also small motorboats to head deep into the park’s backcountry.

When I slid my kayak back into the water, it felt like I’d cast off into wilderness. From a seated position it’s only possible to see 4km ahead, so it didn’t matter that Kingsmere Lake was only 20km long. It looked like the biggest lake in the world, and there wasn’t another boat in sight.

An hour later, I was still enjoying the solitude. I dropped my beer overboard, and because the surface was too warm and cans float, I weighted the six-pack with half a dozen rocks inside a reusable shopping bag screened with Canadian Tire’s “this bag is green” motto.

I pointed my boat toward shore and climbed out onto a rocky beach. Finding a seat in the shade, I downed my first beer and pulled out my book. The afternoon soon dissolved into a blur of pages interrupted every few chapters with a dive into cold waters for another beer.

Just to the north, linked to the waters of Kingsmere by another 700m portage trail, Grey Owl’s cabin uses an inventory of free postcards to estimate the number of annual visitors. The record stands at 1,400 taken. After my third Molson Old Style, I was pretty sure I wouldn’t be adding to this year’s count. I imagined Grey Owl would understand.

By the time I’d finished my book and stowed my empty cans in the kayak, the sun was gone. I left no trace. My journey ended back in Waskesiu, where I tossed the cans in a recycling bin and left my book on a table at the Evergreen Café.