ARCTIC MAN was officially a go when I got a voicemail from Anchorage sled driver Spike Laskey at 6am. His message reassured us that all we needed to do was pull the trigger: “Hey this is Spike…I’m on my out there right now, not sure if I’ll have service, but yeah I’ll toss you a rope and tow you up a fucking hill if you want…” Click. I remembered Nate Holland’s shit-eating grin a while back when he told me that he knew just the driver for me.

Wyatt and I had done our time on Thompson Pass and were ready to move on. Although it was crushing snow in the parking lot and a full reset was probable, we wanted new scenery and stimulation, plus Nate and old pal Jayson Hale had guaranteed it wouldn’t be hard to find amazing snowboarding terrain in the Hoodoo Mountains. A quick stop in Glennallen for some Tok Thai and fireworks, and we were set for another week off the grid in eastern Alaska.

Arctic Man is held every year just outside Summit Lake, more or less in the middle of nowhere, to the northeast of Wrangell-St. Elias National Park. Now in its 28th year, the Tesoro Arctic Man Classic is a competitive backcountry race comprising a few dozen teams of skier/snowmachiner and snowboarder/snowmachiner. The skier begins at “The Tip,” with a summit elevation of 5,800 and a vertical drop of 1,700 feet in less than two miles to the bottom of a narrow canyon — riders go from zero to fast in a hurry. When the slope levels out, the snowmobiler meets the skier, on the go, with a tow rope and pulls the skier 2 1/4 miles uphill at speeds of up to 86mph. The skier and the snowmobile then separate, sending the skier over the “First Aid” jump and down another 1,200ft pitch to the finish line. Courage, training, and a well-tuned stock 600rpm sled are essential elements for a successful team.

For thousands of sledneck spectators, it’s a chance to feel the speed of the crazy race action, party like it’s spring break, and put their snow machines to the test. Last year, about 13,000 spectators came out to create the fourth-largest city in Alaska for a week. With temps reaching -17 the morning of the race, the surrounding peaks and long rolling spines stayed fresh with flaky snow as distinct snowmobile superhighways began to form on the hillsides. Frostbite was guaranteed if you drove more than 30 yards without a face mask, but that didn’t stop the speed suits from coming out and the big guns of Nate Holland and Jayson Hale going for BIG money and bragging rights. Wyatt and I went for it with our 160-something freestyle boards, while the 210cm Kessler of Nate’s clocked the fastest time in Arctic Man snowboard history, just under 4 minutes. Spike Laskey turned out to be an awesome Polaris team racer, with a pissed off sled and cool attitude that put him into 2nd place in the ski category. Wyatt and his Ski-doo racer John Dean finished a couple slots behind Spike’s and my respectable 8th place.

It was a great feeling to have just survived the race, and we spent the rest of the weekend enjoying the colorful Arctic atmosphere with buttery powder turns, beautiful sunsets, echos of 2-stroke, beer tent dance trains, oil-drenched pallet fires, and new friends. When the crowds tucked their tails and split on Sunday morning, we stayed an extra day to take advantage of what had become an eerily private powder paradise. As the light turned soft late in the afternoon, we watched as a convoy of snow vehicles from the United States Army Alaska drove up the canyon on a recovery mission for the body of a 9-year-old boy from Fairbanks, who had fallen 200 feet into a crevasse the day before. A solid reminder that it’s not all fun and games on the glorious glacial terrain. The “Voodoo in the Hoodoos,” as the colloquial catchphrase goes, definitely lives up to the legend, and the local Alaskans like to prove why the Arctic Man mentality is one in its own.

Words, photos, and video by Wyatt Caldwell and Yancy Caldwell. 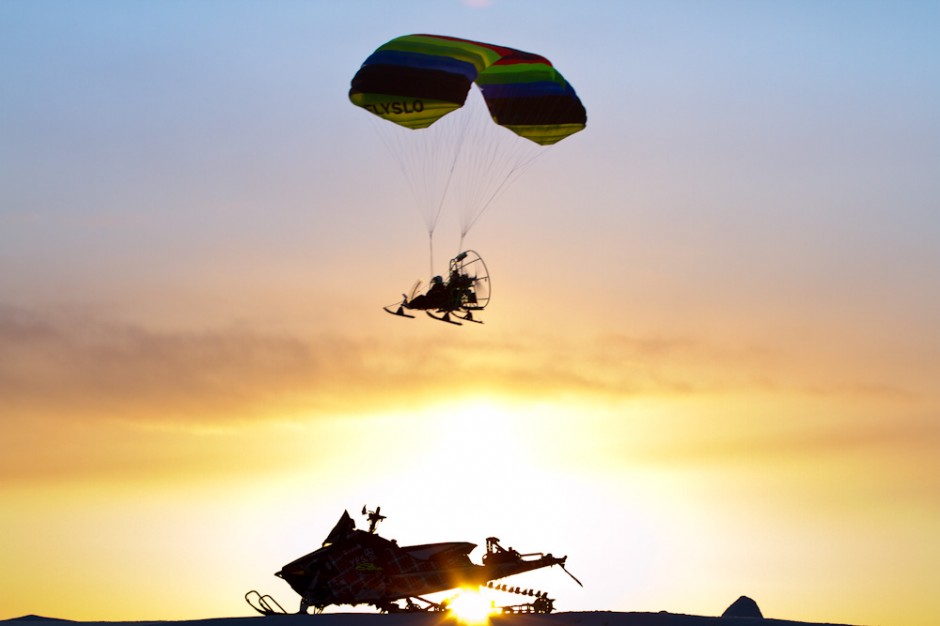 At Arctic Man, you have free rein to express your creativity and ingenuity. Mainly this is done through sled mods and loud pipes. And then we saw this ultralight paraglider pass over the snowbank behind our camper at sunset. 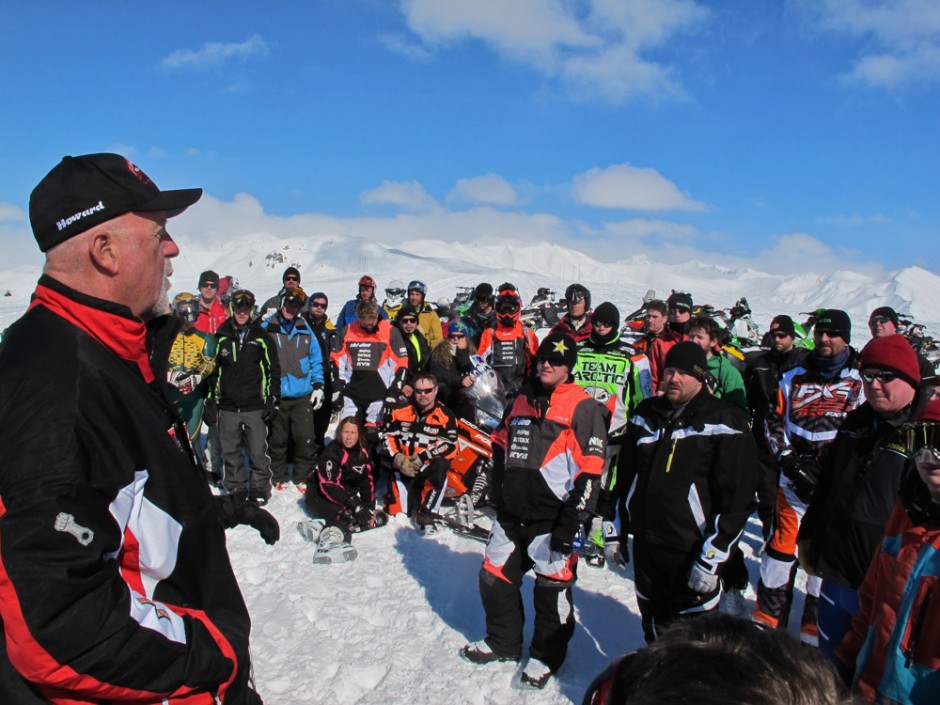 Race teams listen intently as Arctic Man Founder and Race Director Howard Thies calls out the rules and rallies the troops at the racer meeting. 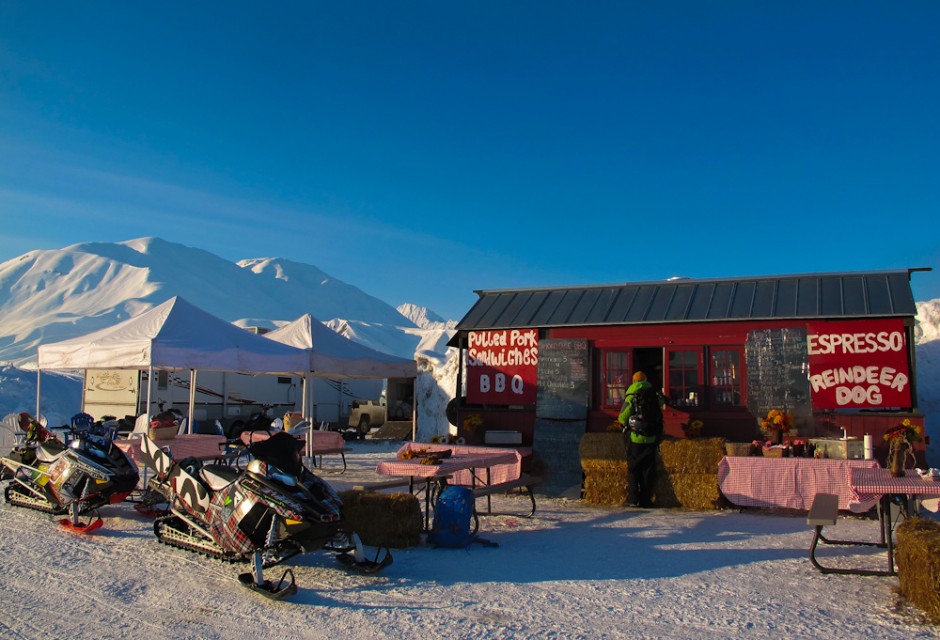 When it’s -17 outside and you’ve been sledding all day, nothing is better than a chili-cheese reindeer dog to the face. 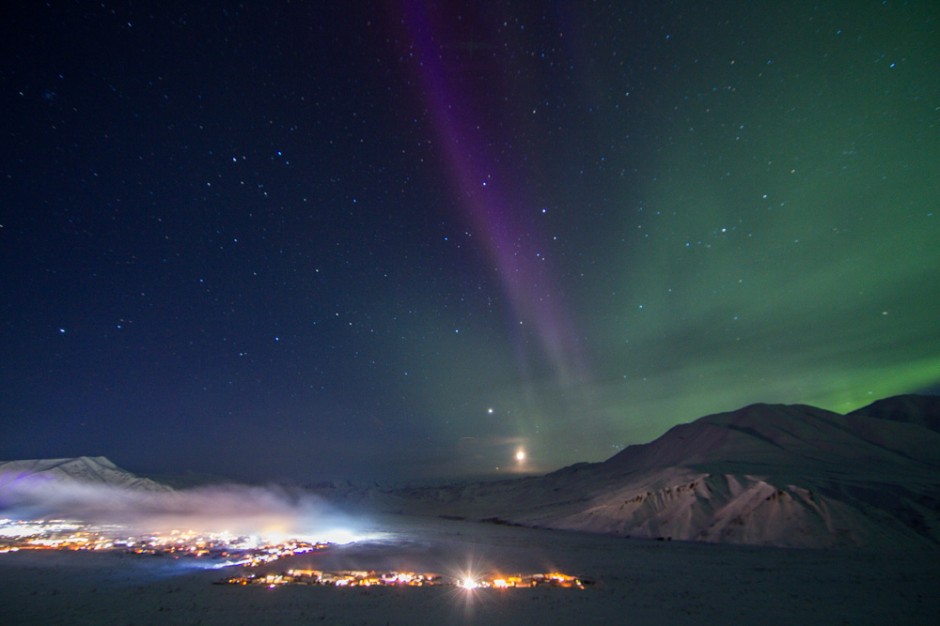 The aurora begins to dance about over the city of Arctic Man, while inside center camp a couple hundred Alaskans dance to Ken Peltier and slam Rockstar and whiskey. 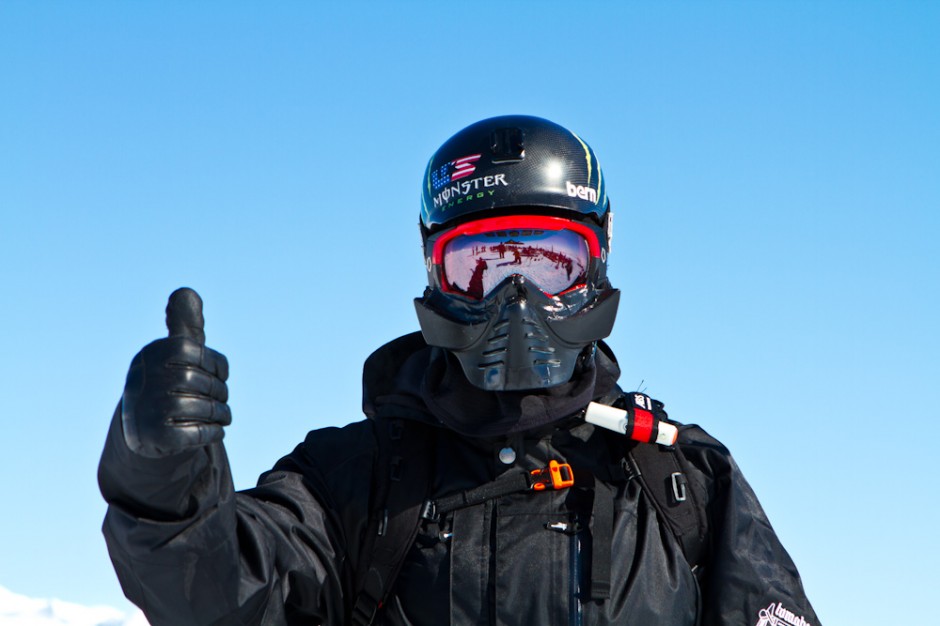 Two-time Arctic Man Snowboard Champ and US Olympian Nate Holland gives his stamp of approval to the 5.5-mile race course he would soon dominate with the fastest time in snowboard history. Thanks for the wax, Nate, and sorry your bet didn’t pan out. 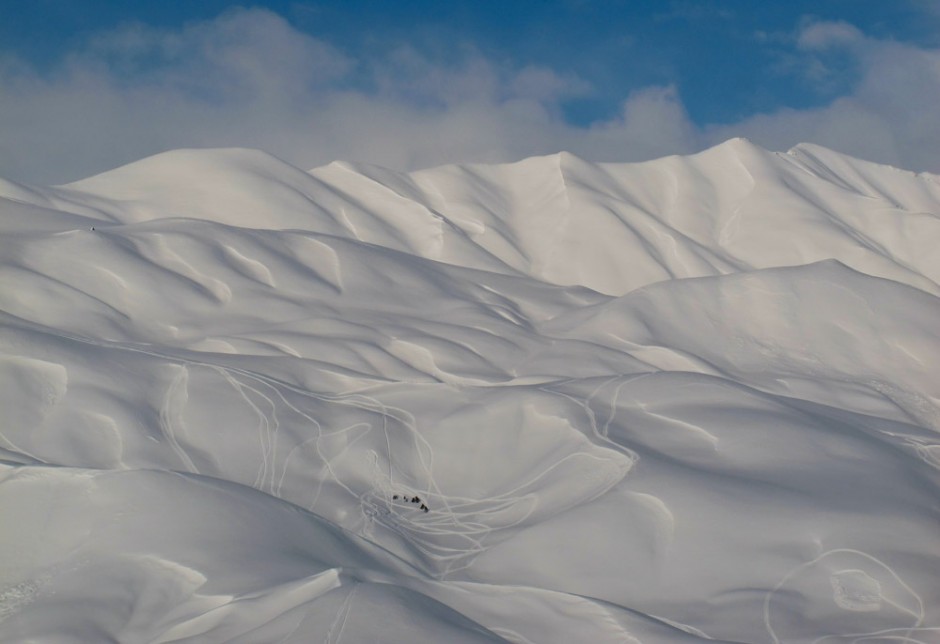 The sled-accessed terrain is vast and provided some fun riding, but you always have to watch weather conditions to avoid getting caught in a sudden blizzard. 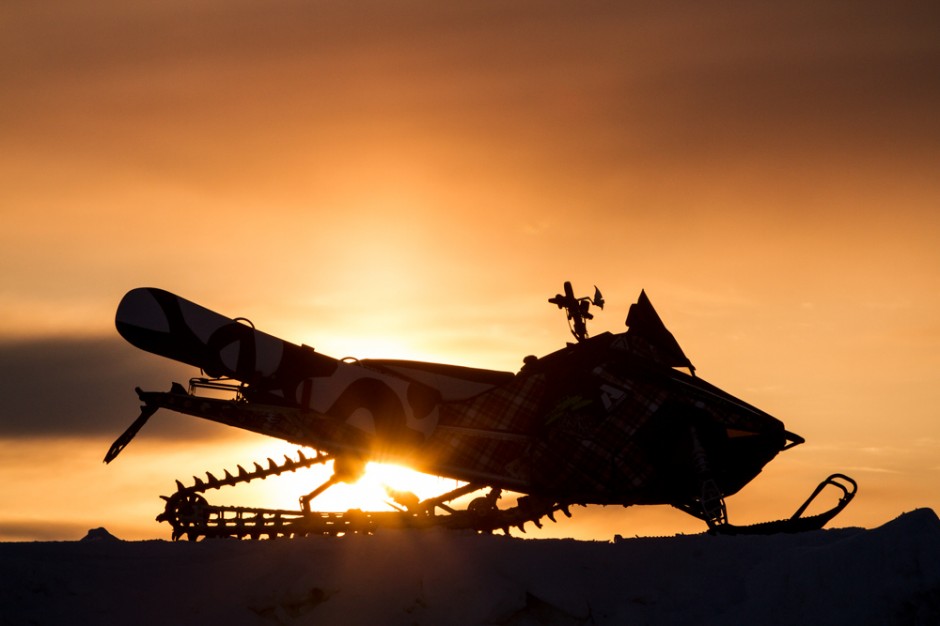 Without our Cheetah Factory Racing snowboard racks, our daily operations as snowboarders, filmmakers, drivers, and racers would not have been possible. 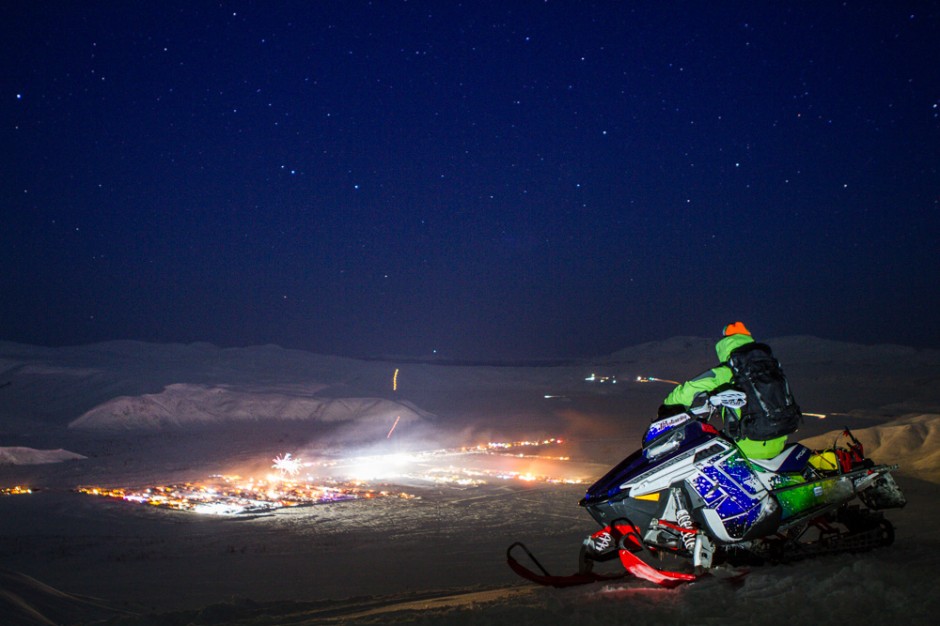 I couldn’t resist pinning it up for a vantage of the entire Arctic Man spectacle in full effect. A rare moment of repose after an intense week of winter action. 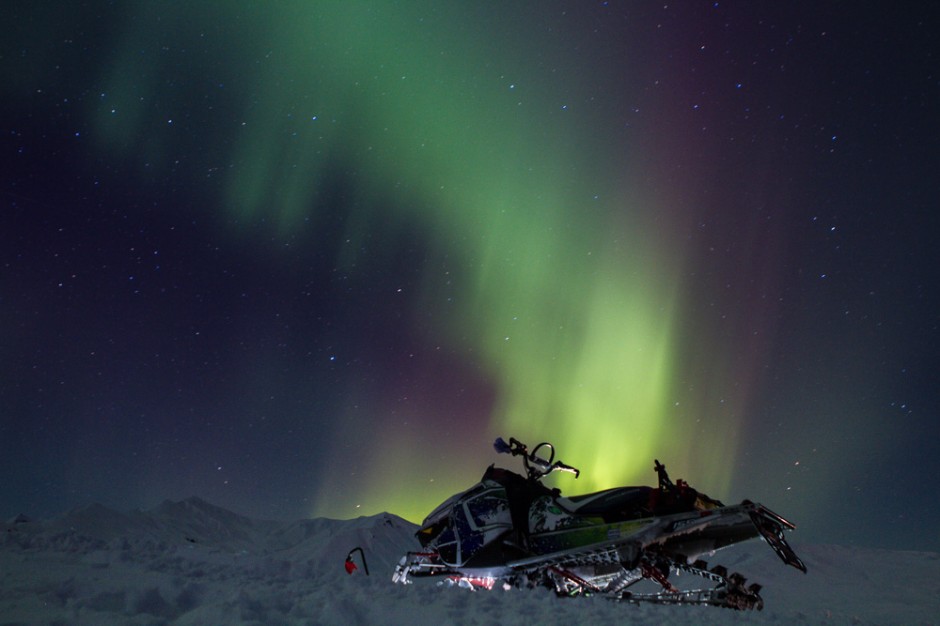 Little did I know the Northern Lights would begin to absolutely crank a few minutes later. The first and last time on our trip that I really saw the aurora going off. 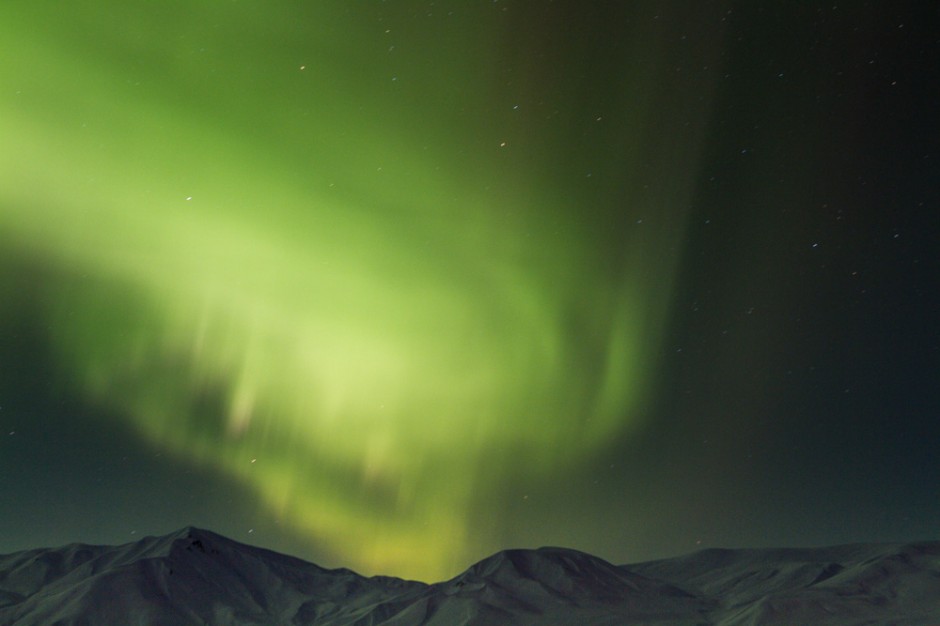 Luckily I was high enough up on the mountainside that the light pollution wasn't a problem. My first aurora borealis photos ever! I thought I could hear the electromagnetic energy quivering across the sky. Mind blown! 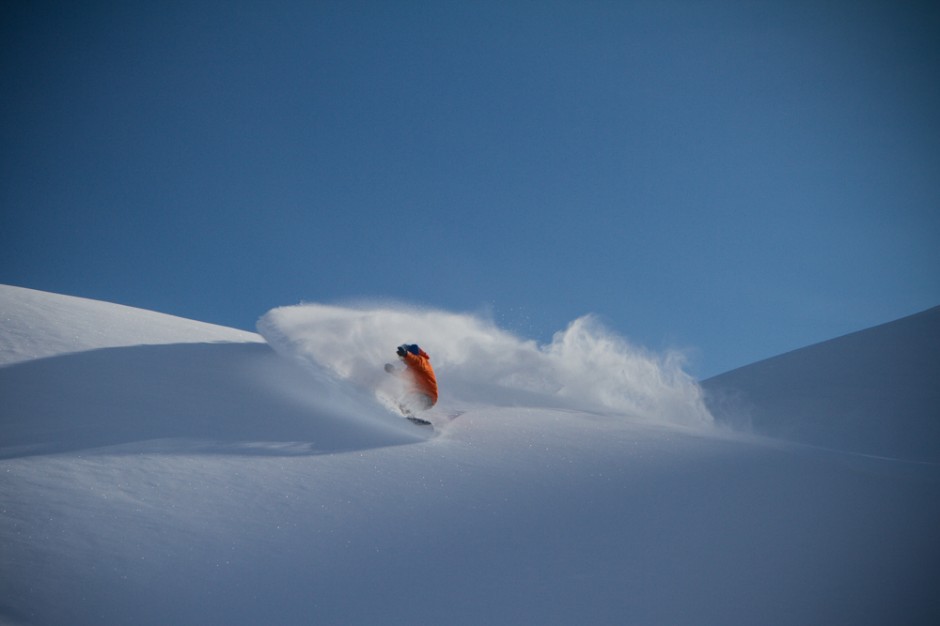 Wyatt snaps a frontside slash on one of the numerous long, rolling, and incredibly fun sled-accessed gullies and slopes. Only one thing was certain after the weekend: We will be coming back to the Hoodoo Mountains in the near future.