Story by David Page. Photos (except where otherwise noted) by Pete Clark, a family practice and sports medicine doctor based in Mammoth Lakes, California. He’s an official physician to the U.S. Ski and Snowboard Association. He is happy to have his respectable job, family life, and failure to commit to any one sport as solid excuses to tag along on rock and snow and ice with his world-class athlete friends. 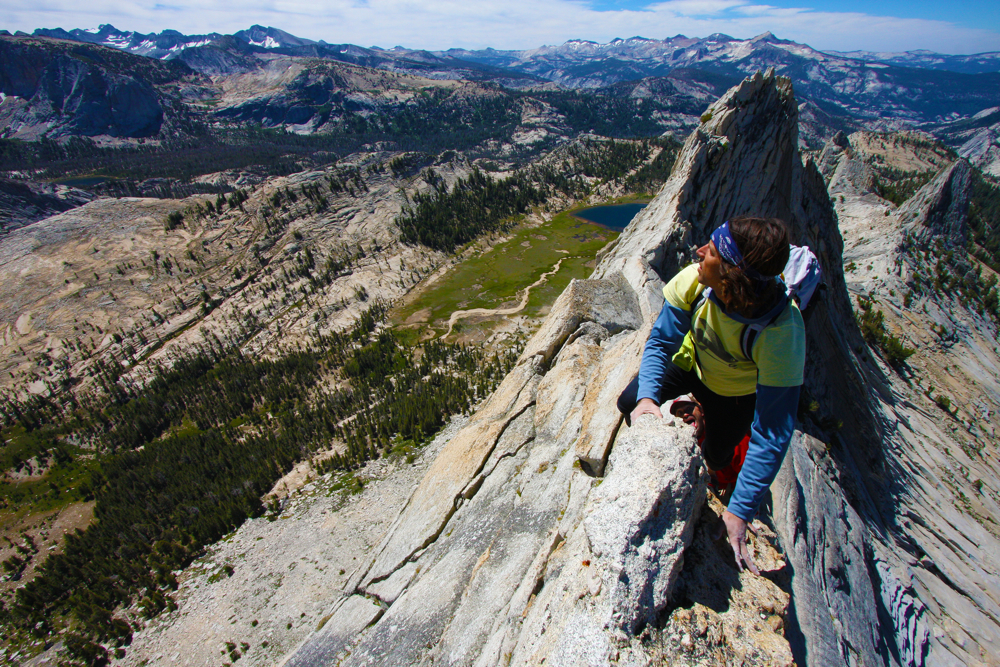 So now we climb
All we do is climb
And we’ll just keep on climbing
Until the day that we die…
– From “The Ladder,” by Michael Margolnick

Then comes the moment — half dreaded, half yearned for — when the meadow ends and the rock begins. We sit, nine of us, on the scattered boulders there at the edge, with the late-summer sun now rising over the southeastern tentacle of Mount Conness. 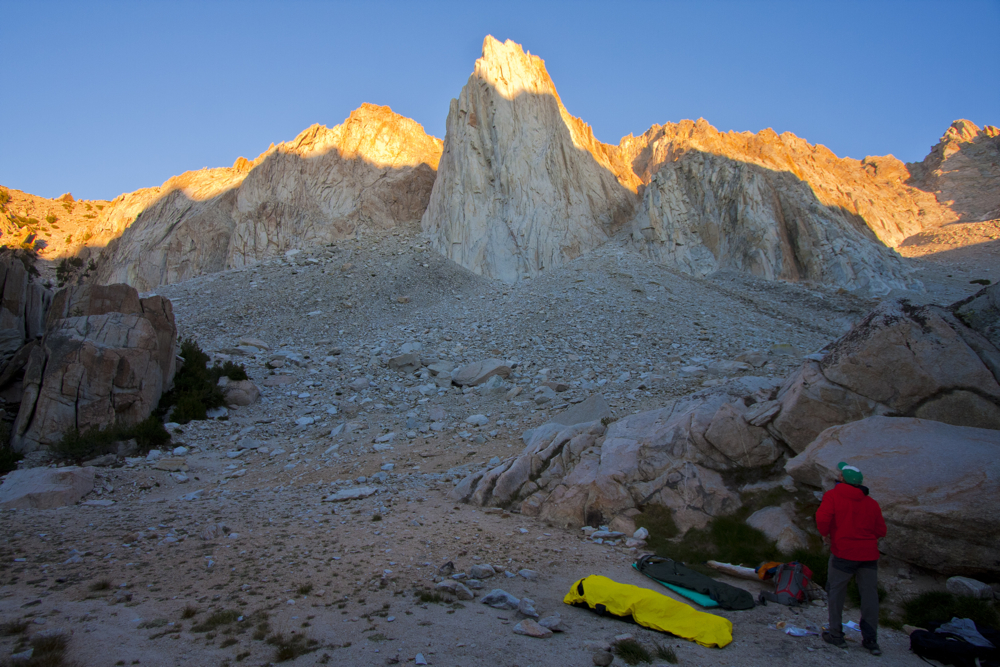 We exchange our cross-country shoes for sticky, rubberized climbing slippers. We eat a bite or two of one or another brand of condensed nutrition. Or peanut butter and jelly. Or chocolate. We suck water from plastic bladders, cinch our packs and step up onto and into an implausibly upended landscape of granite. 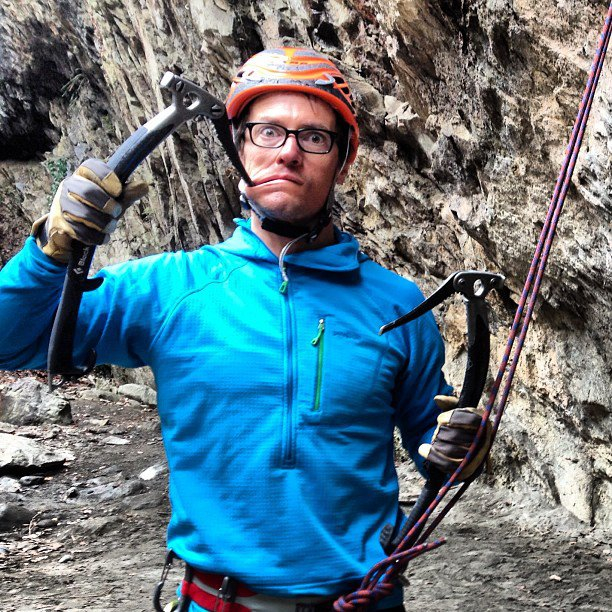 And then there is now. Only now. We are not carpenters or chefs. We are not doctors or wine stewards or elementary school teachers. We do not have bills to pay or firewood to split or children to drive to soccer practice. We are but intricate mechanisms perfectly suited for hauling ourselves upward. We are strong and nimble and graceful. To the extent, that is, that our minds allow us to be no more than that.

Thousands of feet above us rises the classic West Ridge, cracked and broken and jumbled: tombstones and countertops, diving boards and fins, knife edges and whole, uncut mausoleums piled from here to the sky. 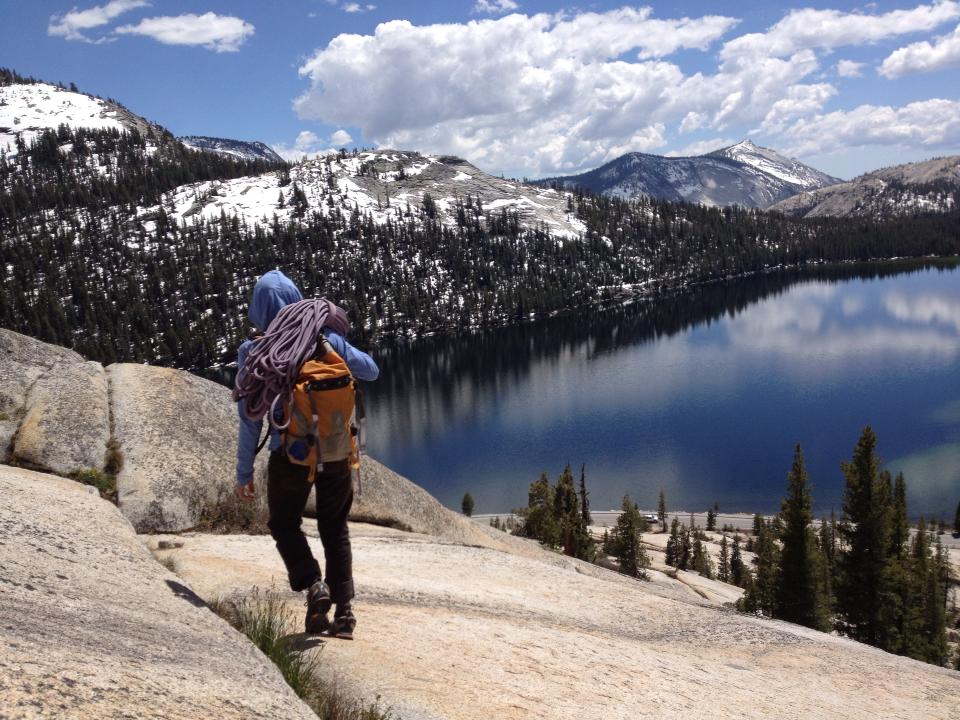 A few rungs off the tundra, in a comfortable well of shade, sits a young gentleman from Cambridge, England, with a helmet on his head and a rope extending upward from a belay device on his harness to a partner somewhere beyond the horizon.

We have no rope. We have no harnesses. We have only our hands and feet and minds to keep us connected to the rock. 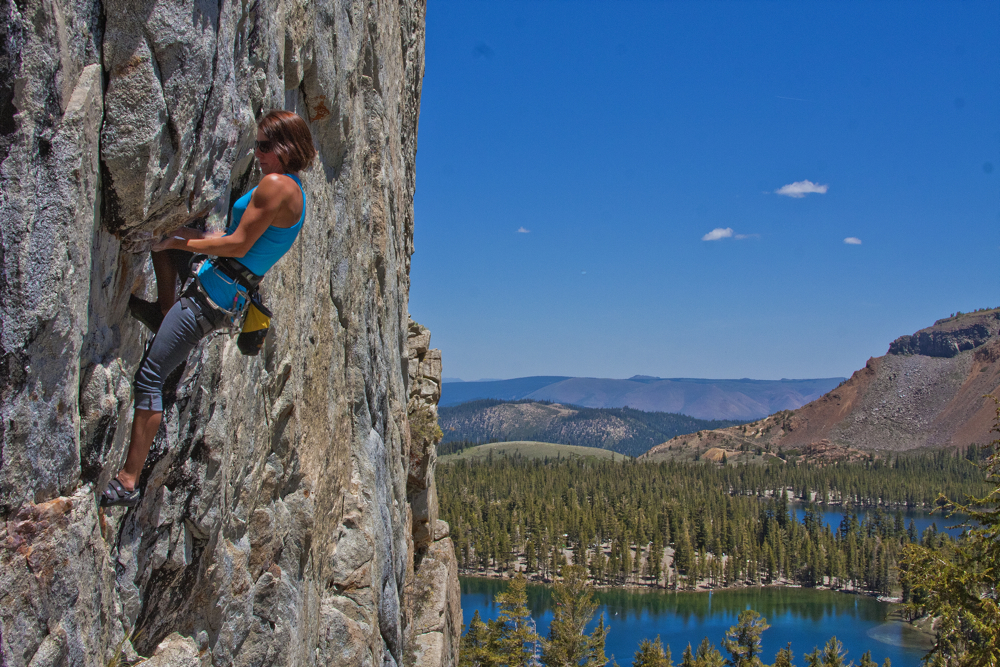 Good morning, I say, as if nothing. As if my companions — all much more seasoned than I in working with and against the pull of gravity — had not already disappeared up the blade of the knife, scrambling hand over foot like the primates most of us have long forgotten ourselves to be. As if I were not already imagining myself a trembling heap waiting for the helicopter to come and pull my body off the mountain. Mind if I climb through?

I hadn’t for some reason thought about it this way. Yes I suppose I am, I reply. And then I reach a dead-end and have to down-climb, traverse across his line and start fresh up another route.

I am not alone, exactly. I have eight partners in this. But the most they could do for me, if it were to come to it, would be to try to talk me back to reason — such that I might be able to get myself out of whatever impossible position I’d put myself in. 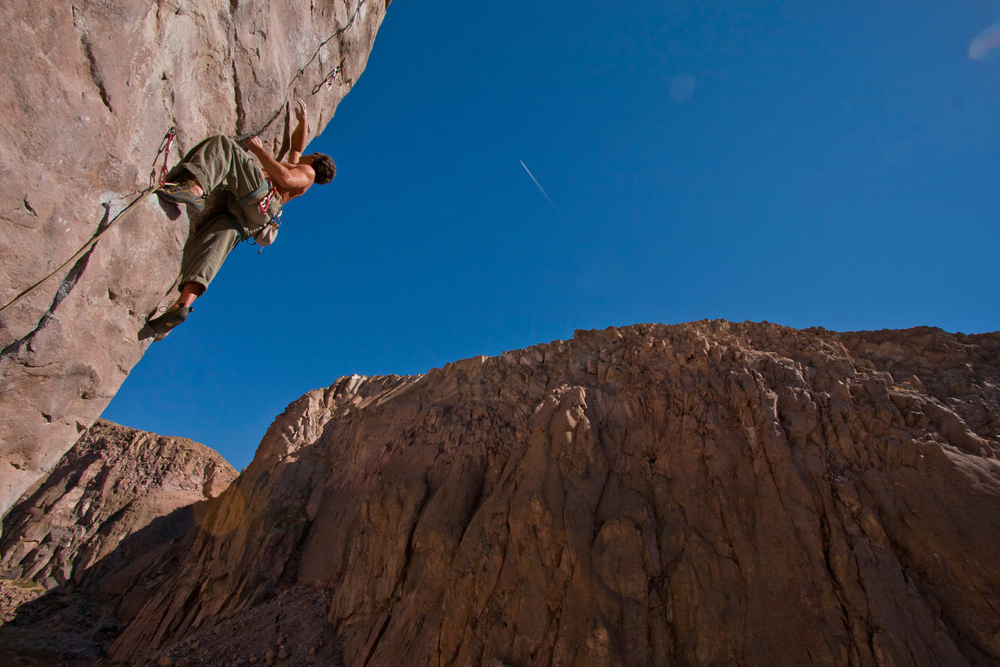 Wonderfully, nearly every piece I reach for, every placement for my toes, every nub or lip or full-blown ledge, nine of every ten anyway, is anchored from above by its own mass, or by the weight of another above it, by the angle of repose. It holds me. It’s comfortable and solid. And what’s not solid can be avoided. 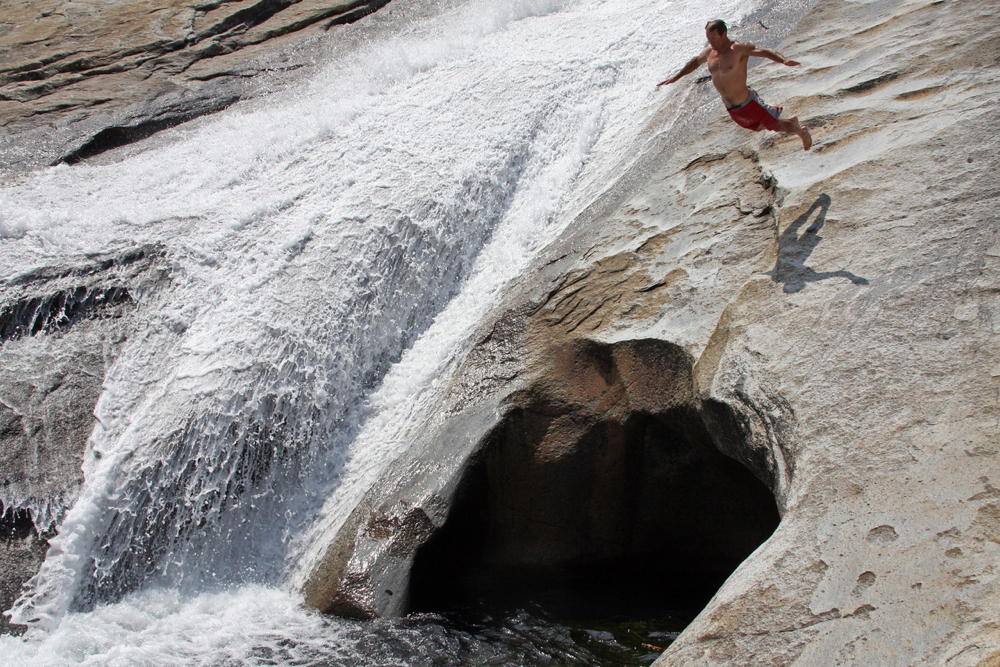 Still, every time I do this (which, depending on whether I happen to be at the top or the bottom of a climb, is always either not frequently enough or one too many times) I think to myself: Why am I doing this?

There is, of course, the fear of losing one’s balance, of sliding, of peeling the skin from one’s fingertips on the grit-slide down the slab. There is the fear of free falling, the long pause in the air, the bouncing, smashing, exploding on the scree far below. Which fear, though not particularly rational, always threatens to become reality. I have good friends who’ve taken big, unprotected falls, shattered an ankle or been forced to launch a new life from the vantage of a wheelchair. And yes, there are those who’ve died.

Gravity is the constant here. It is my very good friend and also a nasty enemy. An inch this way is good. An inch the other direction not so much.

We like to believe there’s a line between reason and delusion. But really no such line exists. The tension here, as in all of life, is in the tentative move from one place that is safe and sturdy and known to a new place that may very likely not be so. 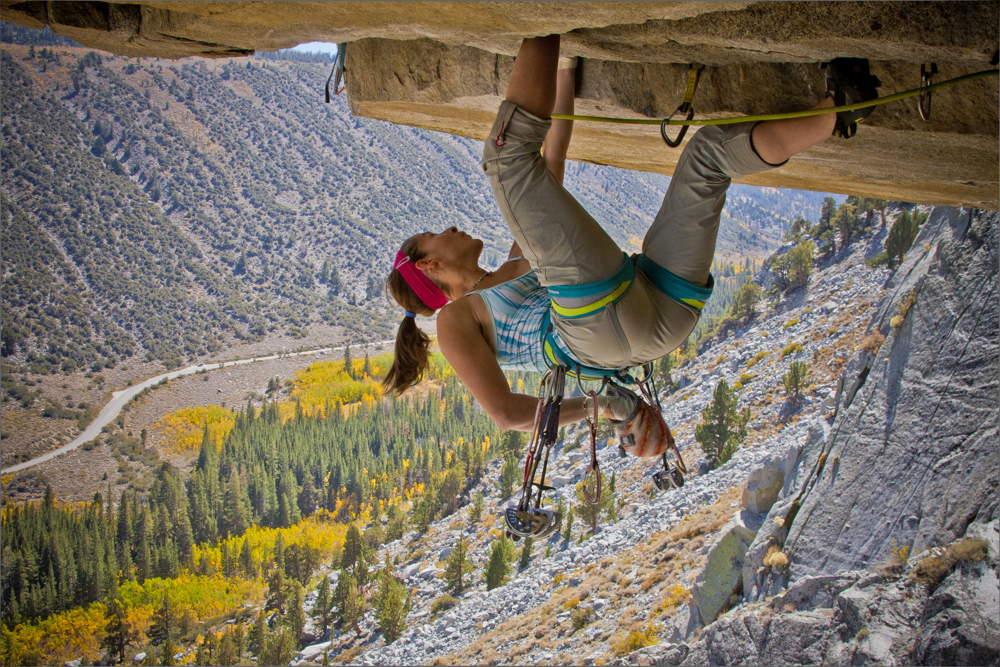 Would I be safer lying on my back in a meadow? Certainly. Would I be less likely to get hurt standing on my deck at home watering my wilted tomato plant? Probably. And thankfully that’s a place I will get back to once again — later. In the meantime, I have no choice but to trust my friends and the movement of the planet and to get on with it.

And so I crawl ever so lightly across this glittering micro topography. This is travel at its most elemental. Here a neon-green shock of lichen. There the smell of crushed pennyroyal. A loose tablet to be reached over. The sound of an updraft across the wingfeathers of a raven. A trickle of seepwater. Eventually, finally, a windless summit and a lukewarm can of beer and the slow creeping-back-in of time and peripheral vision.

But for now there is now. Only now. 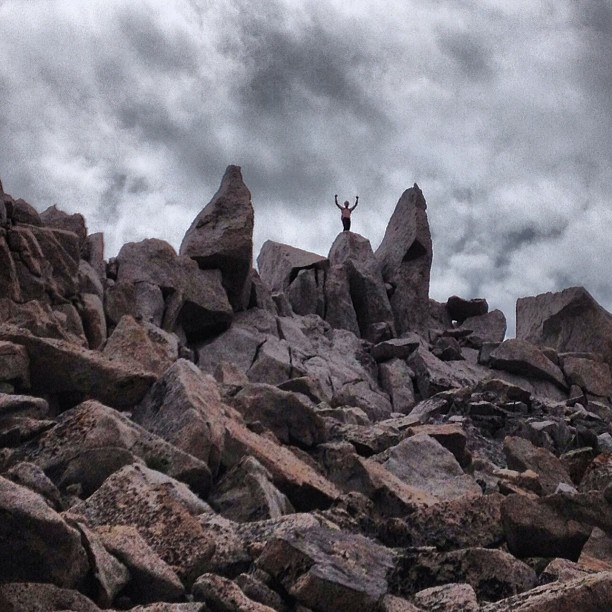 This post is proudly produced in partnership with SanDisk.
Tagged
Climbing Narrative California, United States SanDisk: Telling Life’s Stories from Memory
What did you think of this story?
Meh
Good
Awesome
✖
travelstoke
Download the mobile app
stoked by