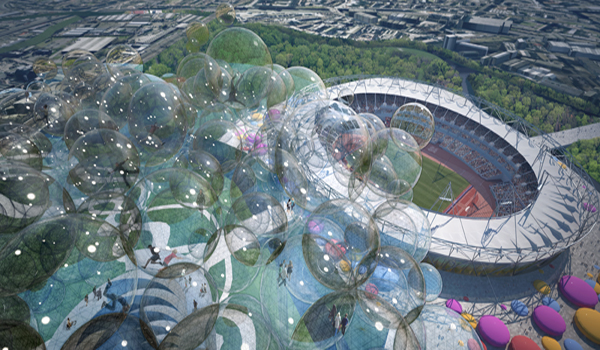 Photo courtesy of the CLOUD

The big news at the summer Olympics usually revolves around swimming and gymnastics, but the Cloud could take center stage in 2012.

Last week, a global team of designers, architects and engineers revealed their plans to build the Cloud, a digital and physical structure that will broadcast real-time images and data on three-dimensional screens during the 2012 summer Olympics in London, England.

It consists of several inflatable, transparent “bubbles,” which will broadcast Olympic events as they unfold as well as news from around the world, updates on the weather and practical information for people visiting the city. While people can view images on the bubbles as they float in the sky, the sound will be broadcast at ground level.

The Cloud marries the concepts of technology and environmental consciousness by running off of solar power from photovoltaic panels.

And just as the structure is flexible in design, so is the price tag. The team plans to build the Cloud through a “cloudraising” campaign that will use the digital product to request donations. Team members will use Facebook and Twitter to promote their efforts, and Google will provide advertising through YouTube and on its search results pages. It can be built for as little as $5 million dollars, but if the dough rolls in, the Cloud can be expanded to accommodate $50 million worth of donations.

Right now it appears that the Cloud will be something that only those in London during the 2012 Olympic Games will be able to utilize. But a lot can change before 2012, so it’s hard to say for sure what direction the Cloud could move in before then.

In any case, perhaps it will make for some interesting commentary during the downtime between the 100-meter backstroke and the women’s all-around gymnastics finals.

Heading to the 2010 Olympic Games in Vancouver, Canada? Here are some hints on how to find free accommodations.

Tagged
Outdoor London, England
What did you think of this story?
Meh
Good
Awesome