I FIRST HEARD RUMORS of how a hearty band of Lake Michigan surfers transformed Sheboygan, Wisconsin into the “Malibu of the Midwest” in the late-1980s. For the half of my life, I grew up just thirty miles south of those guys in Mequon. Lake Michigan was in my backyard. Every morning over a bowl of cereal, I would gaze through my living room window at the Great Lake, but not once did I say to myself: Look at those waves, I’m gonna ride them with a surfboard.

I, like most other Wisconsinites, never once considered surfing as a local form of recreation, even during the muggiest summer afternoons.

At an early age, I was aware that my body was not built for cold weather, so much so that I still suffer from early stages of hypothermia even when I’m ankle-deep in Lake Michigan’s warmest days–which is why I moved to Southern California before the ink dried on my college diploma.

When lifelong surfers from Malibu, Huntington Beach, San Onofre and San Diego discovered that I was from Wisconsin, they couldn’t contain their excitement when asking if I knew “those guys from Step Into Liquid” or shared how Sheboygan was on their “bucket list” of places to surf. As a result, I was finally determined to take what was just a personal curiosity to an actual meeting with the fraternal twin brothers behind Sheboygan’s surfing revolution: Lee “Waterflea” Williams and Larry “Longboard” Williams, both now 57 years old. 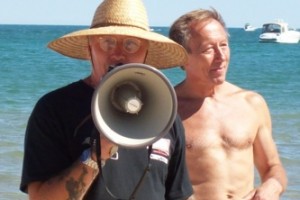 WE MET ON A SNOWY December evening in 2007 at a popular Sheboygan watering hole. Over a few (probably a dozen) beers, they began sharing their lifelong quest. Since they were thirteen years old, Lee and Larry dreamed of surfing the world famous waves of Hawaii, Australia and California. But their reality was in Sheboygan, Wisconsin – a blue-collar community located sixty miles north of Milwaukee – nearly 1,000 miles from either coast. “We always wanted to surf as kids, but couldn’t afford to go anywhere,” Larry explained. “So we brought surfing to us.”

Now their six-decade-old wave-riding crusade culminates every Labor Day weekend, when surfers from around the world converge on their hometown for the Dairyland Surf Classic, which I attended this September. In addition to the event’s surfing and paddle competitions, the Dairyland celebrates the “Third Coast’s” unique surf culture and camaraderie with an old-fashioned Midwestern beach party. “The thing about surfing that people might not understand is that it’s not just a sport; it’s a lifestyle,” Larry remarks. “It’s the shirts we wear; the vehicles we drive. It’s the food we eat. Golfers don’t have their own style of music. We do.”

It is a lifestyle they began pursuing back when Lyndon B. Johnson was advocating civil rights and Vince Lombardi was redefining Green Bay as Titletown, USA. “My brother and I started surfing here in 1967,” Lee recalled. “From the moment we started hanging out with the group of older high school kids who started the Lake Shore Surf Club, we were hooked.” 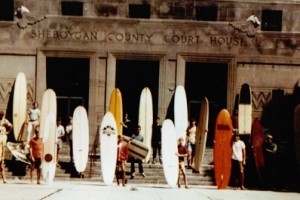 Malibu of the Midwest.

THE BROTHERS KEPT CURRENT on surfing’s latest lingo, fashion trends and music throughout high school by reading as many surfing magazines as possible. When most of the Lake Shore Surf Club’s founding members left for college or the Vietnam War, the brothers continued surfing Sheboygan’s 22 breaks along its five miles of coastline. “With our close knit group of friends, we became advocates for what makes surfing the Great Lakes so special,” Larry said of constantly refuting claims by locals that they couldn’t surf on Lake Michigan. “But we also understood and respected how treacherous Lake Michigan could be.”

Sheboygan’s ideal surf season is during fall and winter, when friction created from cold air traveling across the warm water of Lake Michigan creates a wind swell. Because the region juts out five miles into Lake Michigan, the city gets winds from most directions and therefore more surfable waves than anywhere else on the Lake, according to Larry.

The harshest weather conditions there also create the best waves, sometimes in excess of 12-foot swells. The violent weather systems required for good surfing conditions on the Lake also make the sport risky. Lake Michigan, explains Larry, acts like an inland sea, making it prone to the same type of riptides as an ocean. Additionally, freshwater offers less buoyancy than the ocean, and the wind make wave intervals less consistent. “And all that doesn’t even touch on the obvious,” Larry further explained, pausing. “The cold.” It is because of this that icebergs and hypothermia–not sharks–are a Sheboygan surfer’s most dangerous adversaries.

Regardless, the twins felt that the pride in surfing their hometown waves outweighed the risks. As a result, they adapted to the extreme weather by first modifying scuba suits before neoprene wetsuits were readily available, which allowed their longboarding dreams to flourish. “That’s why a lot of people got into it here,” Larry exclaimed, “and that was long before extreme sports became a fashionable adrenaline rush.”

UNBEKNOWNST TO anyone in Sheboygan throughout the 1960s and ’70s, several other surfing groups had independently formed along the Great Lakes in Grand Haven, Michigan, Waukegan, Illinois and Ontario’s Wyldewood Beach – all looking to capture that same Midwestern surfing vibe. 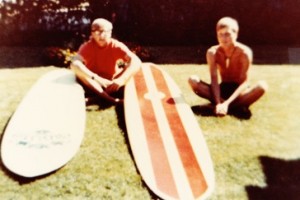 When Lee and Larry founded the Dairyland Surf Classic in 1988, which they knew the nearby surfers would appreciate, but had no idea that their passion for the sport would help redefine the nation’s bratwurst capital. Their local celebrity status as quirky surfers brought them to be featured in the pioneering surf documentary “Step into Liquid” and as the inspiration for Chicken Joe in the animated feature, “Surf’s Up.”

“The Dairyland Surf Classic started as a reunion of some of our old surfing buddies and has since become a destination event,” Larry explained of those who venture in from Michigan, Chicago, Canada and even Hawaii. “The Malibu of the Midwest is now on a lot of surfer’s bucket lists. They say you haven’t surfed every corner of the planet until you’ve surfed Sheboygan.”

Even today, most of Sheboygan’s 50,000 residents are unaware of their community’s growing popularity as a surfing destination. But, exclaims Lee, “When we go out to California, guys say, ‘Hey, I know you — you’re those crazy guys who jump off icebergs!’ I guess that’s quite an accomplishment for a couple of teenagers who just wanted to surf in Sheboygan.”

Inspired by Lee and Larry’s ability to turn their Wisconsin dreams into reality, now when I look at the waves of Lake Michigan, I want to ride them with a surfboard.