THIS OCTOBER, I headed over to the subcontinent to catch up with my wife, Kelly, and her kayaking partner, Lisa, for a month of paddling in Northern India.

Although I missed out on the high alpine river valleys of the Ladakh region, where Kelly and Lisa had spent the previous month, we were able to paddle Himachal Pradesh and Uttarkhand while basing out of Manali and Rishikesh. The rivers took us from the alpine to the jungle with plenty of great rapids and mountain scenery, and it was the perfect trip to get the flavor of whitewater in the Indian Himalaya.

This post was produced in partnership with our friends at Gerber, whose gear is stoking out the Matador Ambassadors. 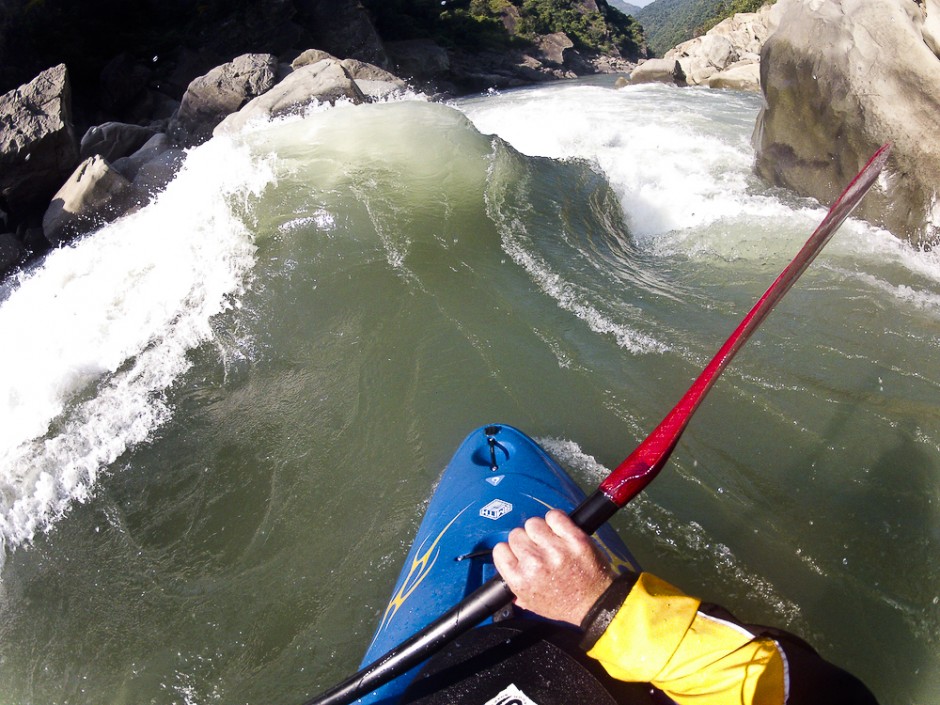 ‘The Hump’ on the Beas River, Himachal Pradesh

With low water, rapids on the Beas transform into puzzling channels through huge boulders. Here I'm going for a huge boof off the hump. 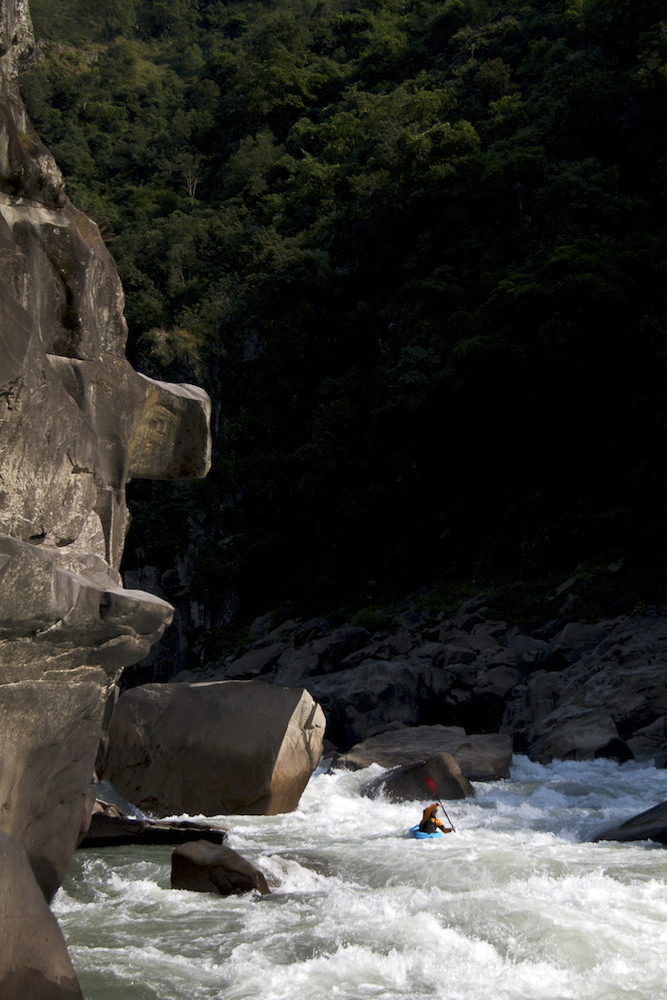 Lisa Dickinson on the Beas

Below the northern city of Mandi, the Beas River enters a remote gorge on its way to Pakistan. India is building dams on its Himalayan rivers at an astonishing rate. Somehow the lower Beas has escaped that fate, although there were several freshly dug tunnels along the river that suggest it might not be too long before the Beas is dammed as well. 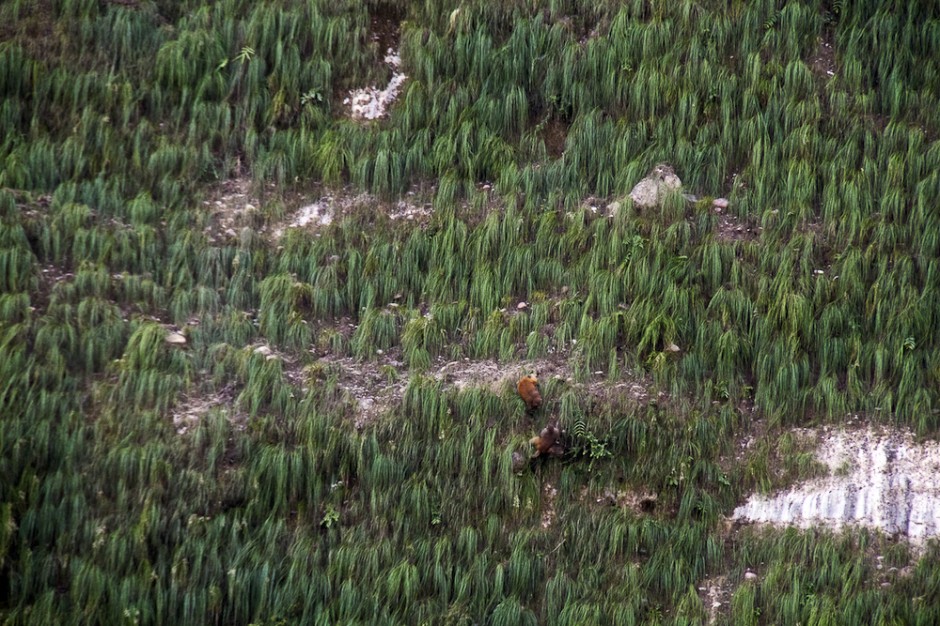 Monkeys are ubiquitous on the lower-elevation rivers in India, and they seem to fight a lot. This squabble took these two males all over the cliff face. 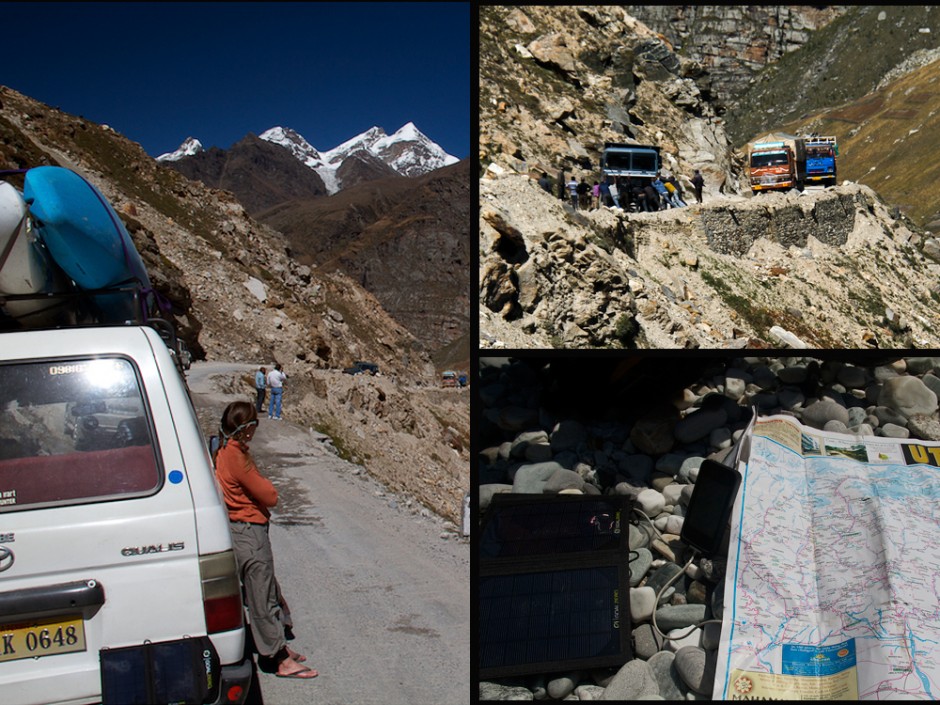 After the Beas, Kelly, Lisa, and I loaded up and drove to the Chandra River, over the 13,000ft Rohtang Pass. Here we're waiting for a Tata with a burnt clutch to get pushed out of the way, and hopefully not over the edge. The delay gave me a chance to do some modern-day route finding with the help of a Goal Zero solar charger. Good maps are hard to find in India, and to keep pace with our schedule I tapped into modern technology, comparing our daily progress on my iPhone GPS to our marginally accurate road map. 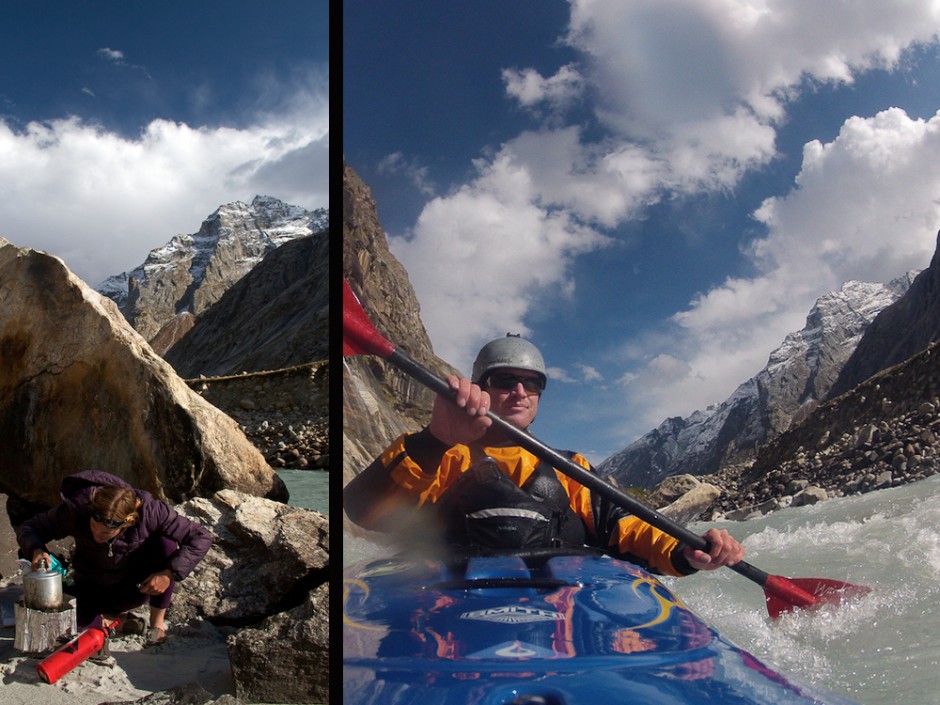 Our descent on the Chandra River began at 11,000 feet, where kayaks loaded for a five-day expedition are really hard to pick up. Kelly makes an afternoon chai surrounded by 6,000-meter peaks. The scenery made the Chandra a stunning paddle. 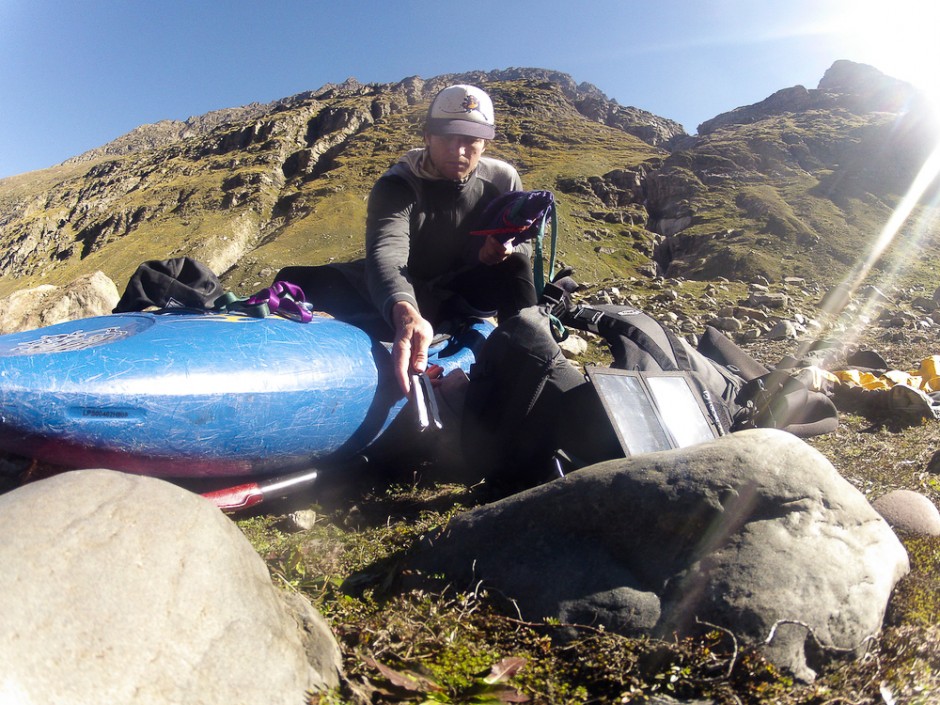 Boat repair on the Chandra

I'm enjoying some early sun here after a frosty night on the Chandra, with a quick chance to work on my gear. My Gerber multitool made a handy companion on the whole trip. 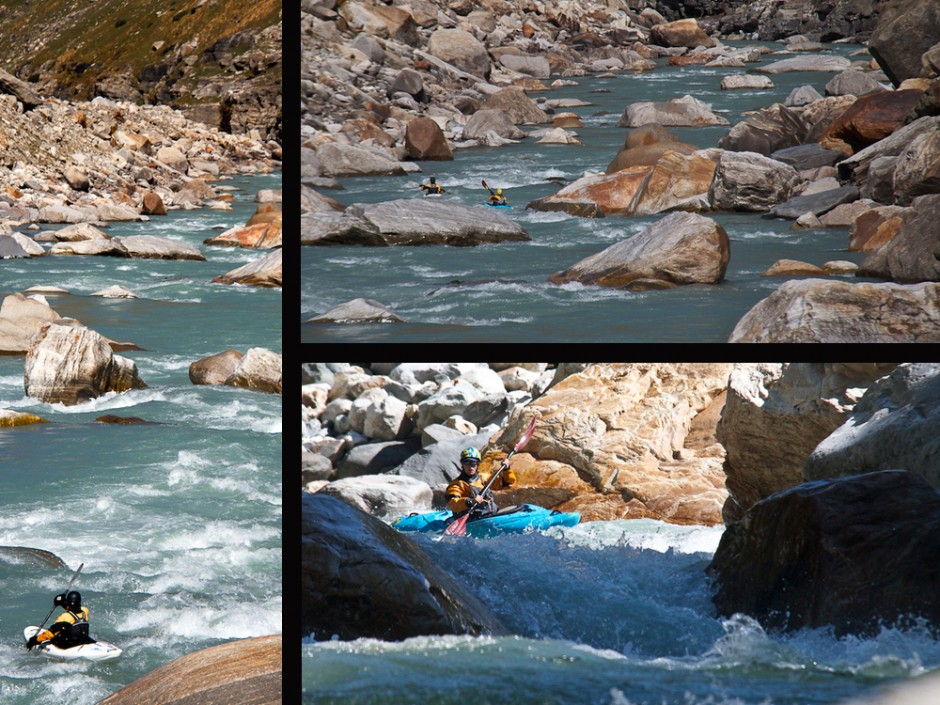 Kelly and Lisa pick their way through the low water channels. During the Monsoon, the river might reach some 30 feet higher, moving these huge boulders around every season. The shot in the lower right is Lisa on the Yamuna River in Uttarkhand. The whitewater on the Yamuna was similar in character to the Chandra with a bit steeper drops and more volume. 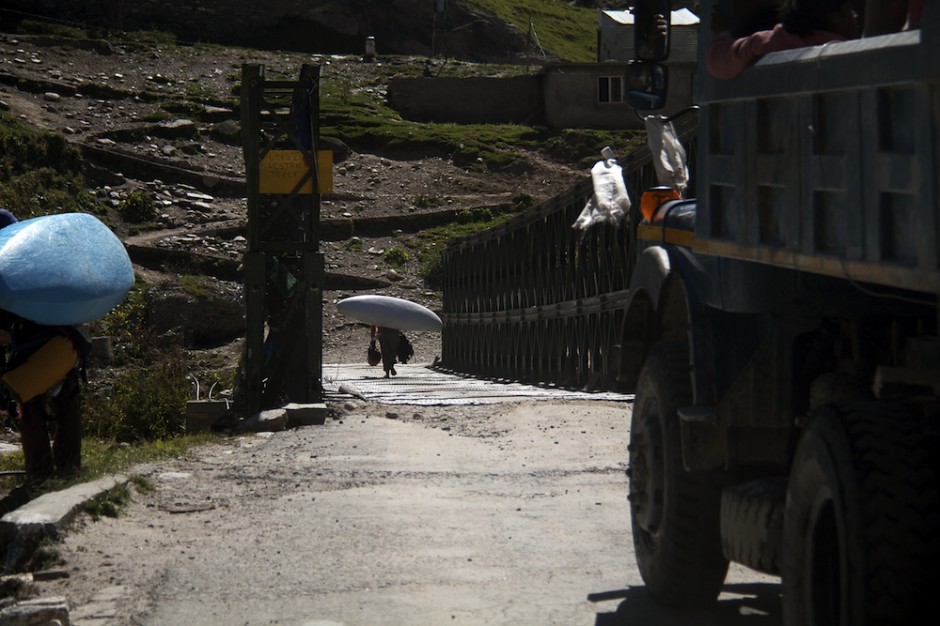 Shut down at Koksar, Chandra River

On our third day paddling the Chandra, two policemen waited for us at an impassable place where an old bridge had fallen into the river. They refused to let us put back on. "By district authority," he boasted, "all rivers in this district are permanently closed due to dangerous conditions." We took off the river and rode a public bus whose brakes screeched all 6,000 vertical feet from the top of Rohtang Pass back down to Manali. 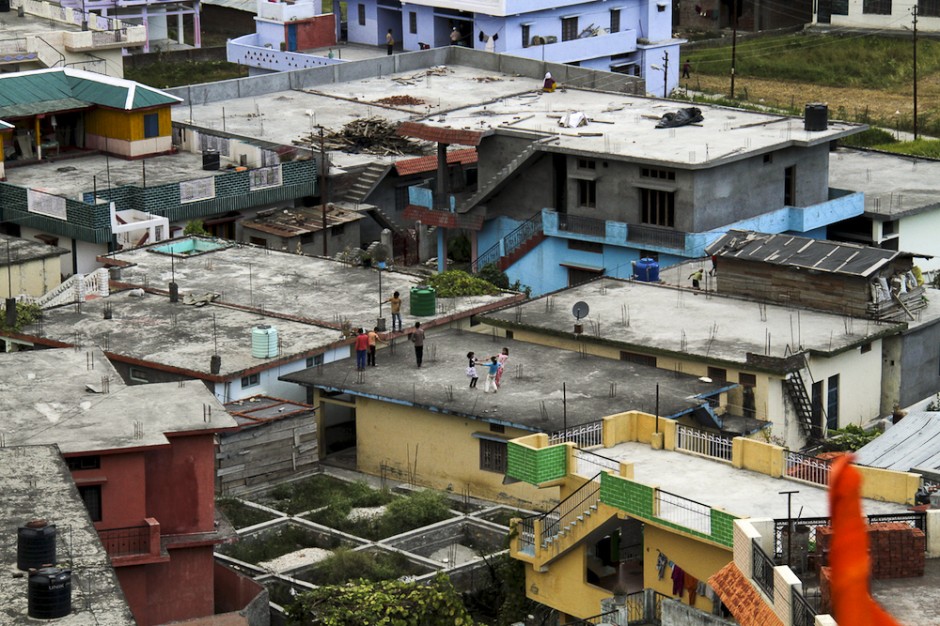 India has remarkably preserved its northern forests, and instead builds most of its towns with colorful concrete. Tourism, and the construction of roads, dams, powerlines, and cell towers, give towns like Barkot a "boom-town" feel. 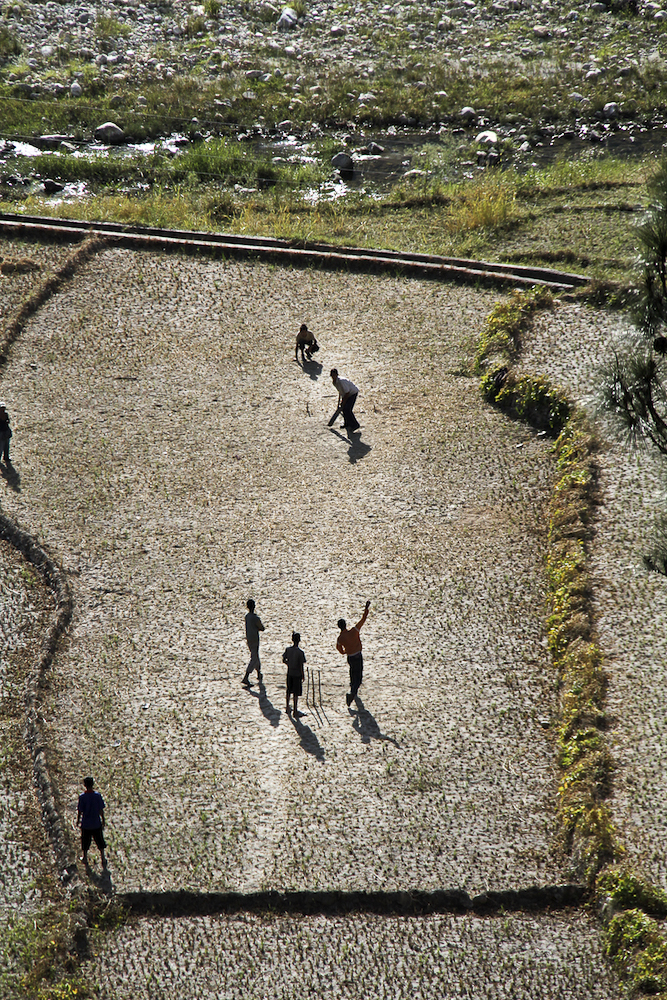 With the rice harvested for the year, kids can move onto the fields and out of the street to play cricket, which seems to be happening everywhere, all the time. 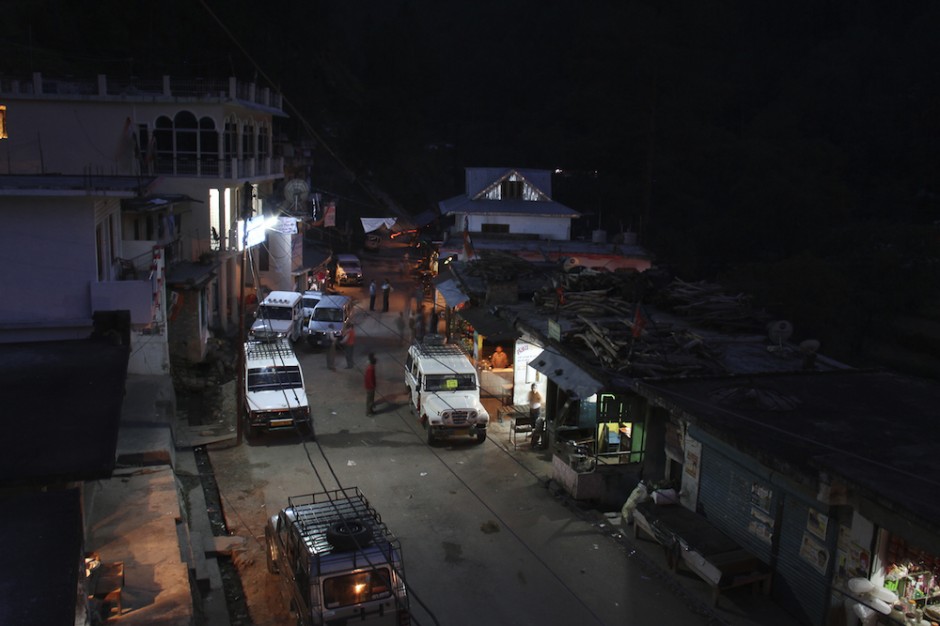 Near our entry for the Tons River, Mori is a classic North Indian small town, with a bunch of shops on the one road, and one hotel. 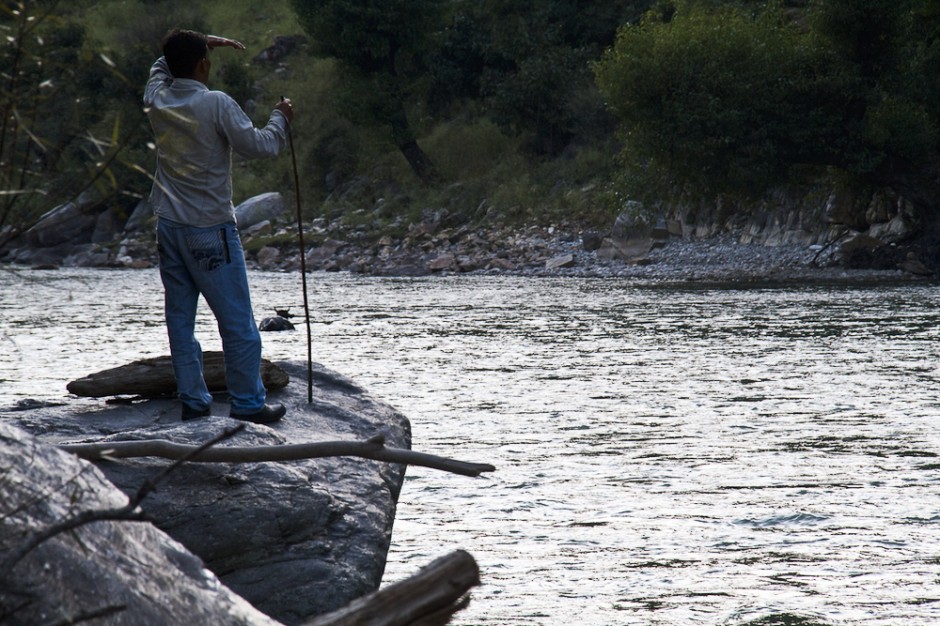 We were playing cribbage at camp when a small herd of cows and a couple of cowherds came walking through. When we got up to make sure the cows weren't trampling our stuff, we watched as the cowherd swatted three of them into the river and they swam to the other side. Then he came over, smiled a big yellow betel-nut smile, and said "bulls," nodding towards the river, and "cows," pointing at the little herd eating grass by our kayaks. 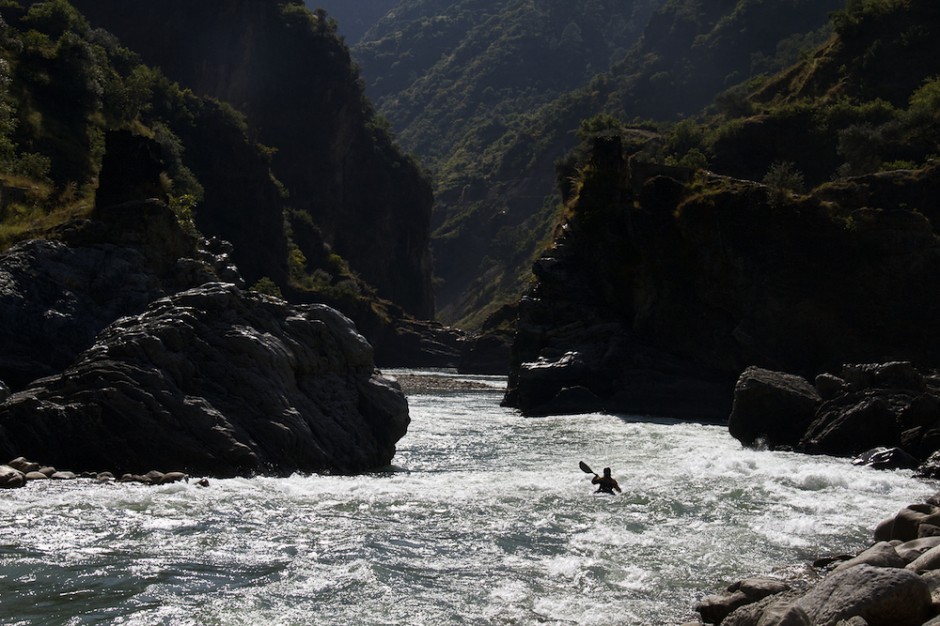 After a few days paddling through towering yellow pine trees, clear water, and rolling hills that reminded me of the whitewater in Idaho, the Tons entered a limestone gorge gradually eroding into dense jungle. 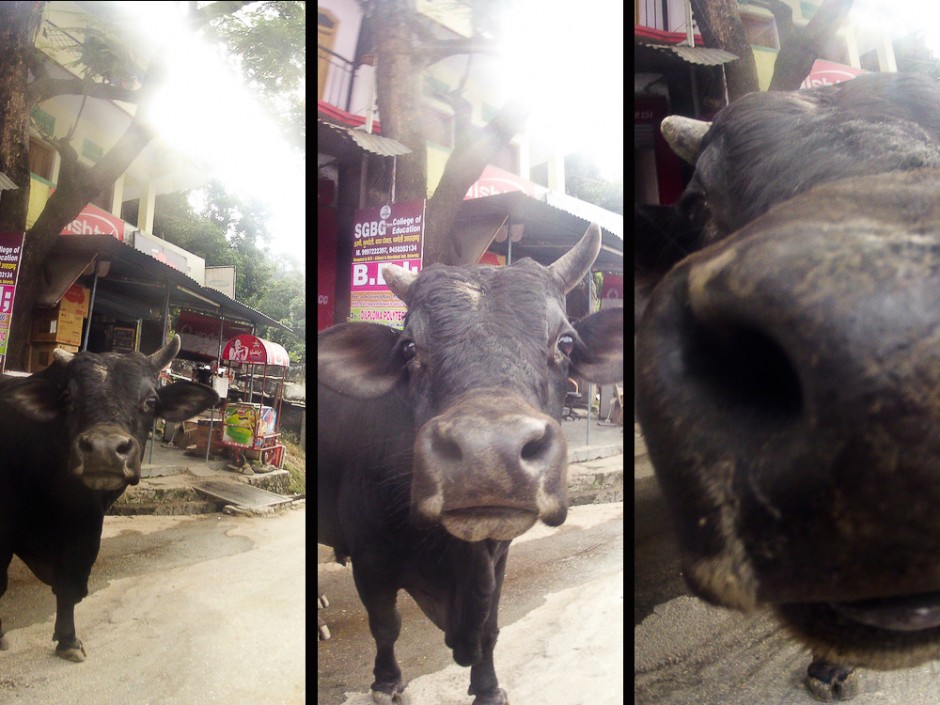 Cows are sacred to Hindus, and many live their days on the streets in cities and towns, where people sometimes feed them chapatis. This bull thought my GoPro might be a snack. 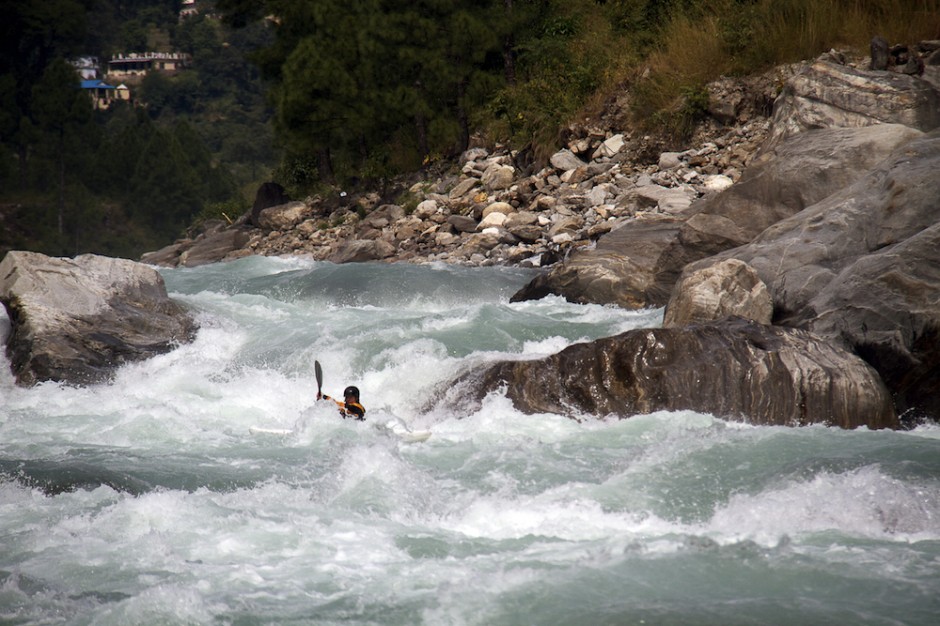 Kelly running a big rapid on the Alakananda River, the most distant source of the Ganges. 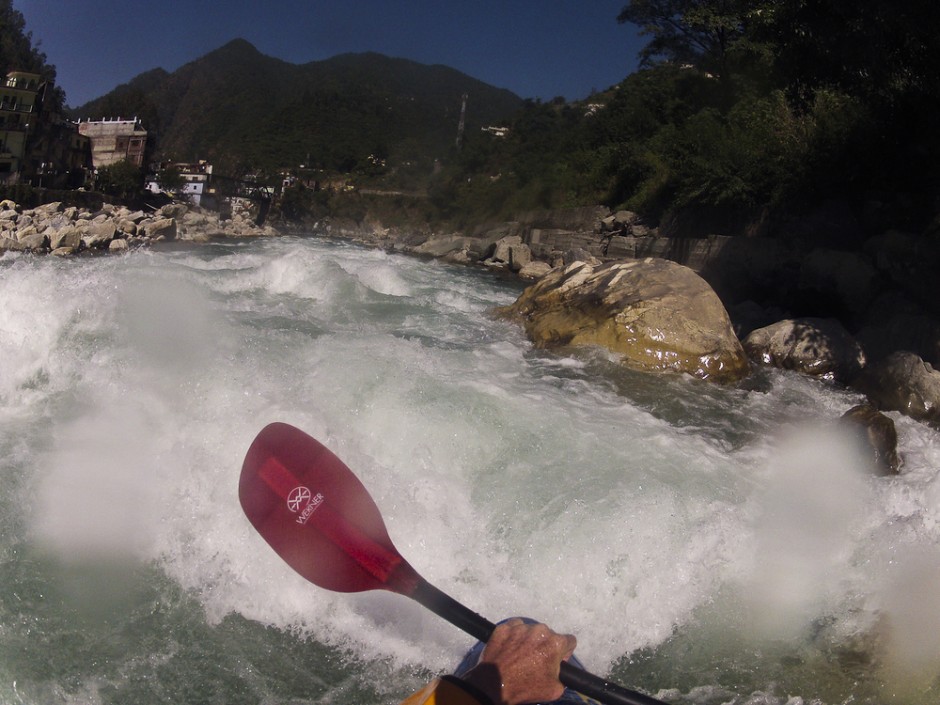 I don't know why, but in India all the biggest rapids are also in towns. At Karnaprayag, where the Pindar joins the Alakananda, was the biggest on the river, and also somewhere we didn't want to scout because of our questionable permission to run the river in the first place. At the confluence at the bottom of the rapid, there was a cremation happening, which everyone but me paddled right next to after seeing me get jacked in the eddy line. 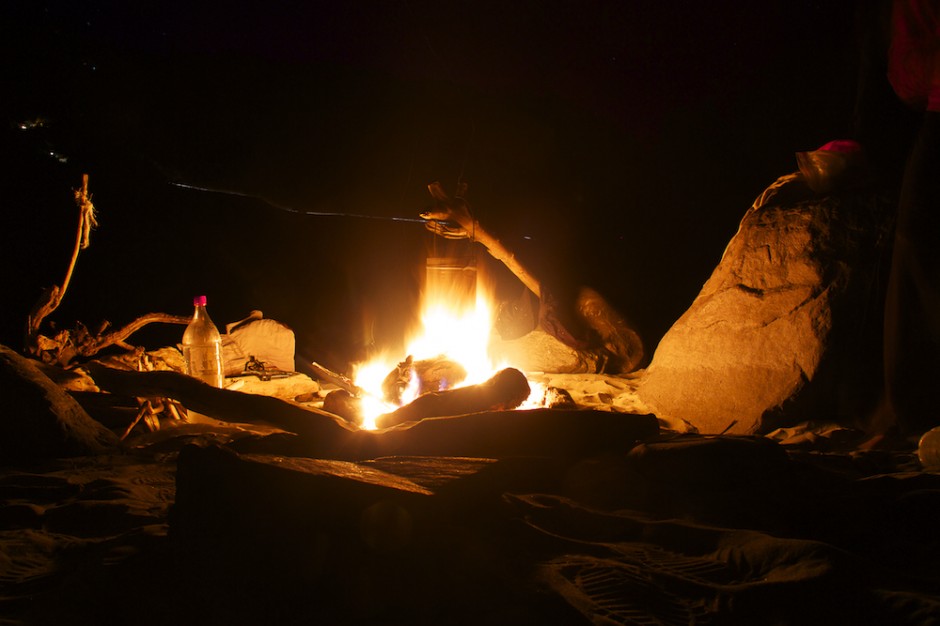 Sadhus, Hindu Holy men, carry everything they own on austere lifelong quests in these little stainless steel pots, which also fit in a kayak and are great for cooking on the fire. 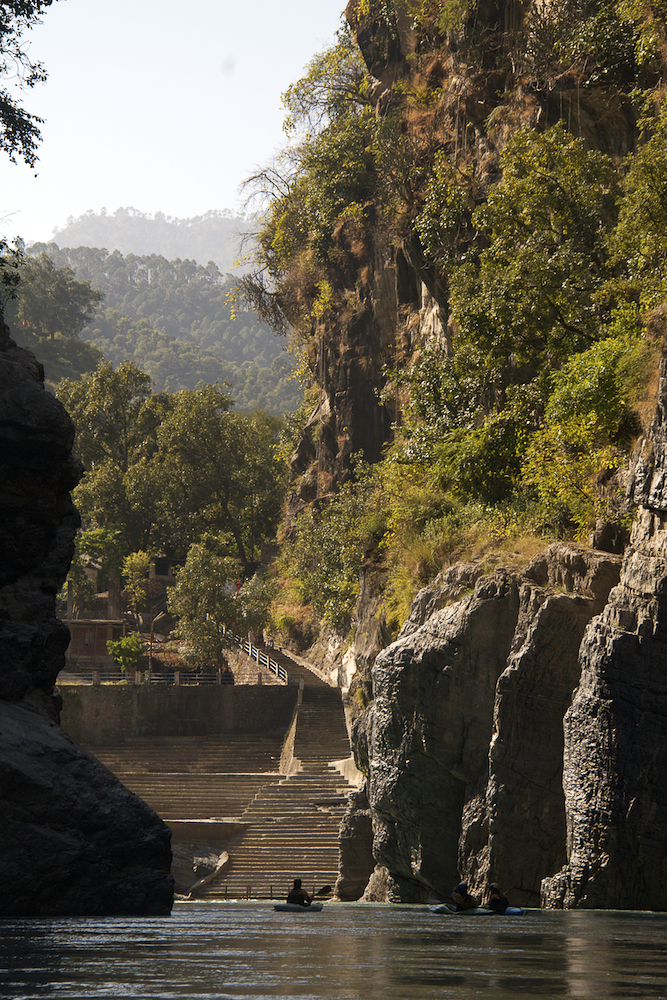 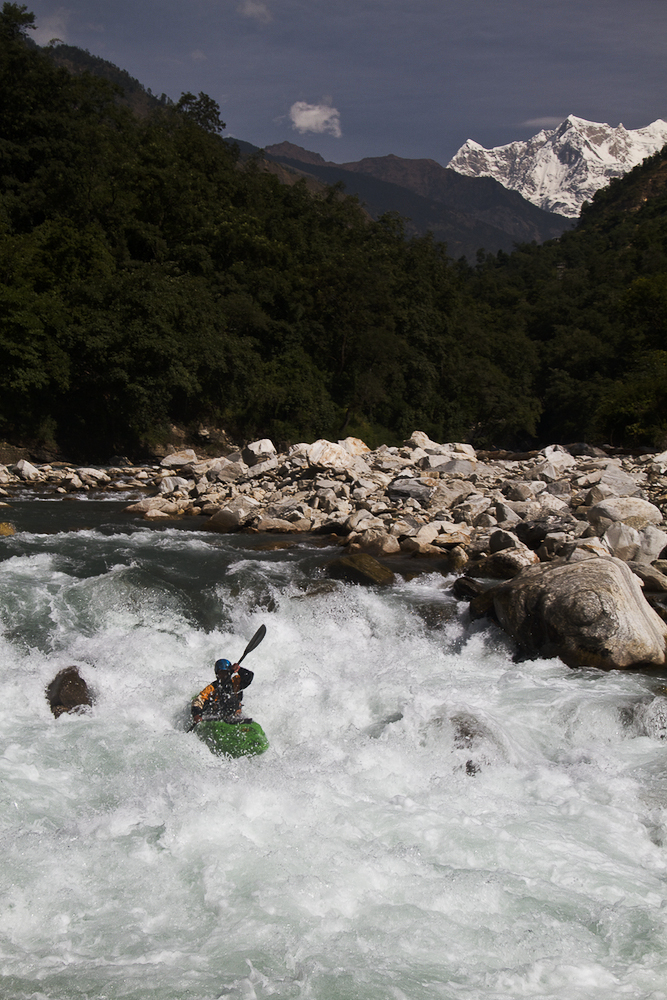 The Uttarnachal Himalaya poke through as a paddler runs this fresh landslide rapid. 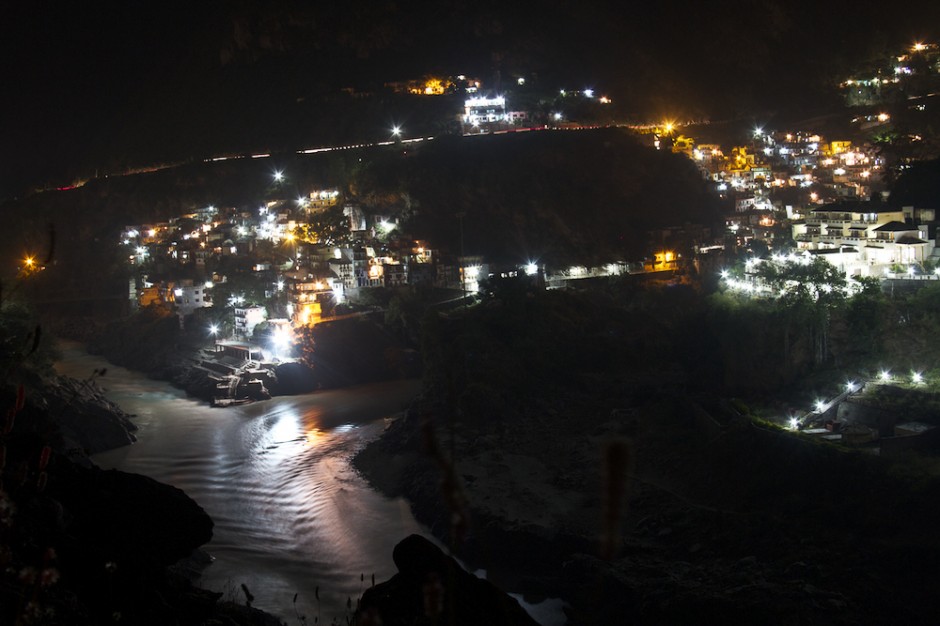 At the confluence of the Bhagirathi (left) and Alakananda (right), the Ganges River (also called the Ganga) begins its holy path to the Indian Ocean. 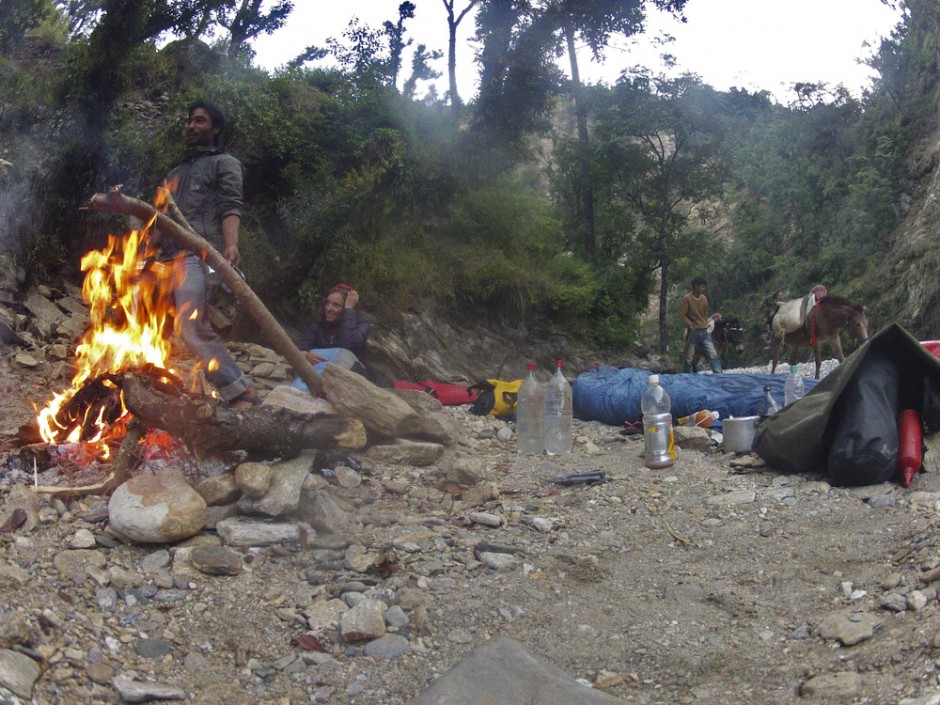 At our camp beside the Mandakini, we awoke at 4am this morning when a gang of men and mules arrived to start packing river sand up the steep hill for use in making concrete. 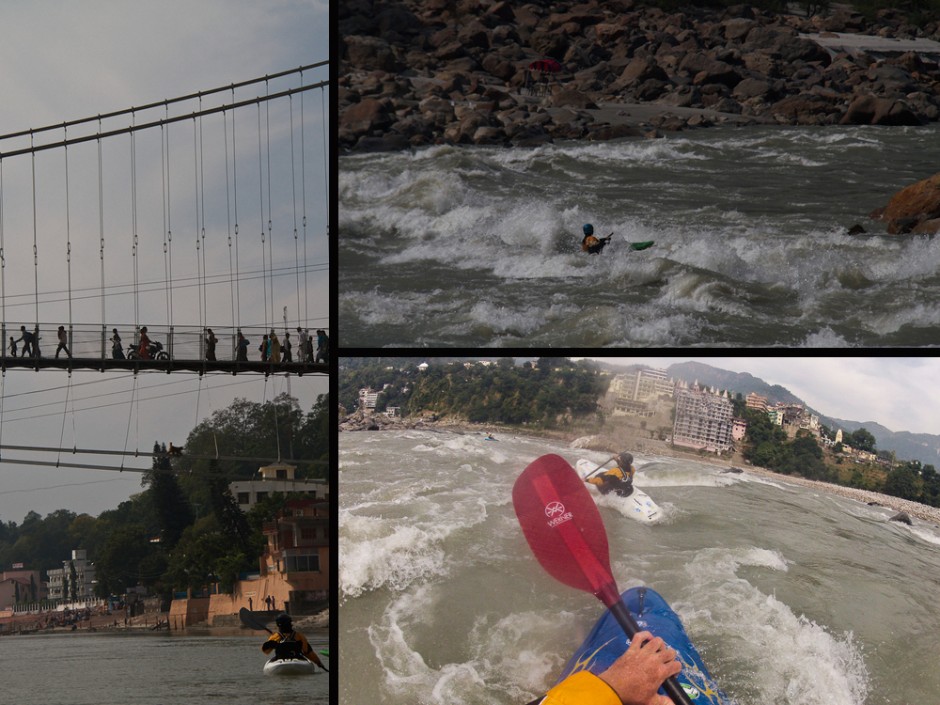 We paddled for two days from the beginning of the Ganga. Just above Rishikesh, great big water class III-IV rapids are the home to over 140 licensed raft companies. With Indian tourists coming to Rishikesh in massive numbers, the Ganga might well be the busiest rafting river in the world. 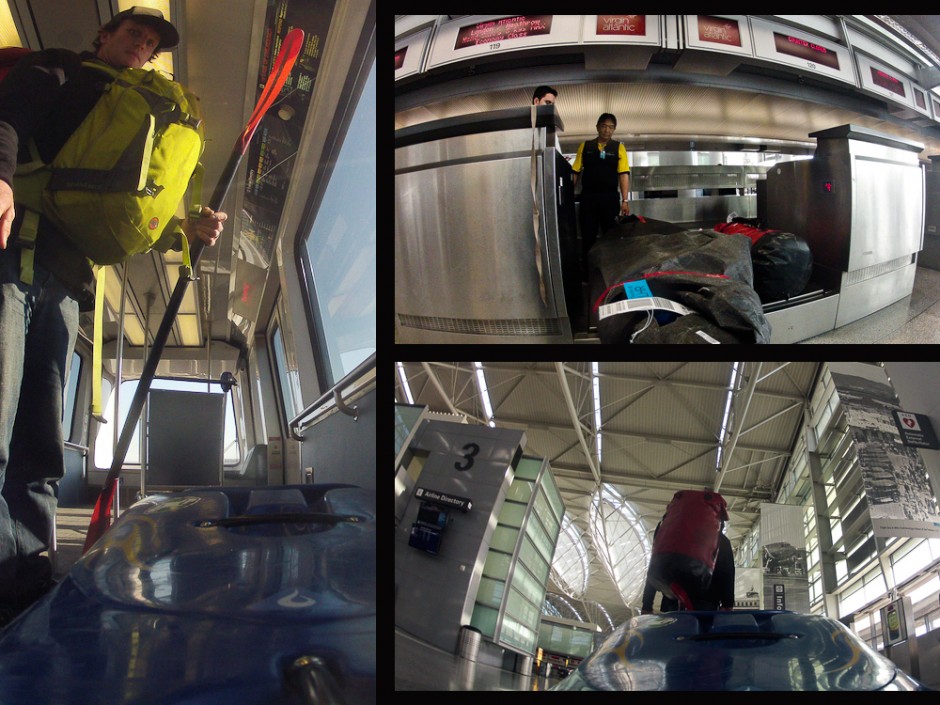 It's always a little crazy going through airports in America with a kayak, loaded down with all my gear, dragging it all through sliding doors and up and down escalators.

Tagged
Paddling Ambassadors
What did you think of this story?
Meh
Good
Awesome
✖
travelstoke
Download the mobile app
stoked by