The silver sand of Nepal’s Sun Kosi River is an almost obscene texture. The feet sink and are enveloped by the liquid rock, as soft as mud but not as slippery, leaving no residue. It’s as stable as sea sand, but not as abrasive, and so sparkly that my magpie eye wanted to scoop it into a vial and paint it onto my nails. The sound of the river is more constant than the sea. I had pitied the landlocked Nepalis their lack of sea, because without it I had thought they had no beaches. But they have their river beaches, as much a center of gathering and recreation as any seaside beach.

I joined an eight-day, 10-person rafting and kayaking trip along the Sun Kosi River, said to be one of the top 10 rivers in the world to paddle. We camped on beaches, sang and drank around campfires, and slept and woke in rhythm with the short, late-autumn days. With little experience of kayaking, I opted to stay on the raft, but most of my group were experienced kayakers. If one really wants to understand the landscape and pace of Nepal, a river trip is necessary. As I travelled down the river and away from the main road, it was easy to believe that the river runs through uninhabited wilderness. But then children’s voices called through the dense foliage — Namaste! Bye-bye! — because they have been watching the flotilla of alien-like figures encased in blue, green, yellow and red plastics and inflatables. Ladies wearing earth and grass-toned tunics squat at the water’s edge, collecting water or laundering clothes. Old men in traditional sand-grey daura suruwal stand still and almost unnoticed, hands clasped behind their backs, watching us.

Nepal is well-known for its extensive mountain trekking routes, but fewer international visitors come to kayak and raft its rugged, varied and beautiful rivers. As Nepali kayak guide Yagya Narayan Shrestha states, “Each river has a different taste.” There are silver-sanded beaches, waterfall showers, rapids dotted with boulders the size of a mini-bus, Himalayan views, Hindu and Buddhist temples to visit, monkeys peeking out from dense jungle, and bamboo farming as Nepal’s misty hills turn to sunny plains. The Sun Kosi’s waters are textured and detailed and twinkle with mineral-rich sand. In places, one could almost place a glass on its still, smooth surface. Elsewhere, undulations and pockmarks give a pebble-like appearance. Sometimes it looks just about to boil, like those moments before the circular convection of bubbles break the water’s surface, remaining just below. The temperature is cold, although not unpleasantly so. Wetsuits aren’t usually needed for Nepal’s rivers.

Yet despite most rivers and accompanying camping beaches being in excellent condition this year, the trickle of tourists has been meagre after the spring 2015 earthquakes. “It’s just been one thing after another this year,” says Chrissy Dawkins, co-manager of Kathmandu-based GRG’s Adventure Kayaking. She’s referring to the fuel crisis — caused by political protests in Nepal’s border regions with India, and India’s ‘undeclared’ blockade of that same border — that is wringing the already-shaken, landlocked country dry. She tells me that it is costing her company roughly three times more than usual to run their trips this season, with the dramatically increased cost of food, cooking gas and transportation fuel. Yet she and her team of Nepali guides –including her husband, business partner and champion Nepali kayaker, Maila Gurung — have continued pushing through. They are confident that things can improve after this season. On the river, from a guest’s perspective, there was little evidence of the behind-the-scenes struggles that went into keeping the trips running. Most evenings, before coming into camp, those of us on the raft stopped to gather firewood: not just for a comforting campfire to sit around, but so that our Nepali guides could cook our food. Normally they would carry gas canisters, but on this trip they only had enough for two days’ meals.

To ensure the safety of the popular Sun Kosi River expedition this year, after April’s earthquake, GRG’s sent three of their best kayakers down the river to check its condition. There was a concern that the earthquake may have caused landslides, changing the course or condition of the river or making the camping beaches inaccessible. It took the three expert kayakers three days to paddle the high, post-monsoon waters of the Sun Kosi. The same trip takes eight days with clients. They found the river and beaches to be in excellent condition, and the Sun Kosi trip has been running all season despite the strain caused by the fuel shortage.

Experienced kayaker and doctor from the UK, Chris Sloan, has been coming to Nepal to kayak since 2009. Then, he says, the only people who came to Nepal to kayak were already serious kayakers, people who were involved in the sport at home and attracted by Nepal’s reputation as the ultimate destination for kayaking. The majority of guests on my Sun Kosi trip were British, and Chris explained that this is no accident. A 1976 documentary, ‘Dudh Kosi: Relentless River of Everest’, is a cult classic about a group of pioneering British kayakers who came to Nepal to run the Dudh Kosi river for the first time. British kayakers feel that they have a legacy in Nepal, much like New Zealanders do in regards to mountaineering thanks to Sir Edmund Hillary’s achievements. 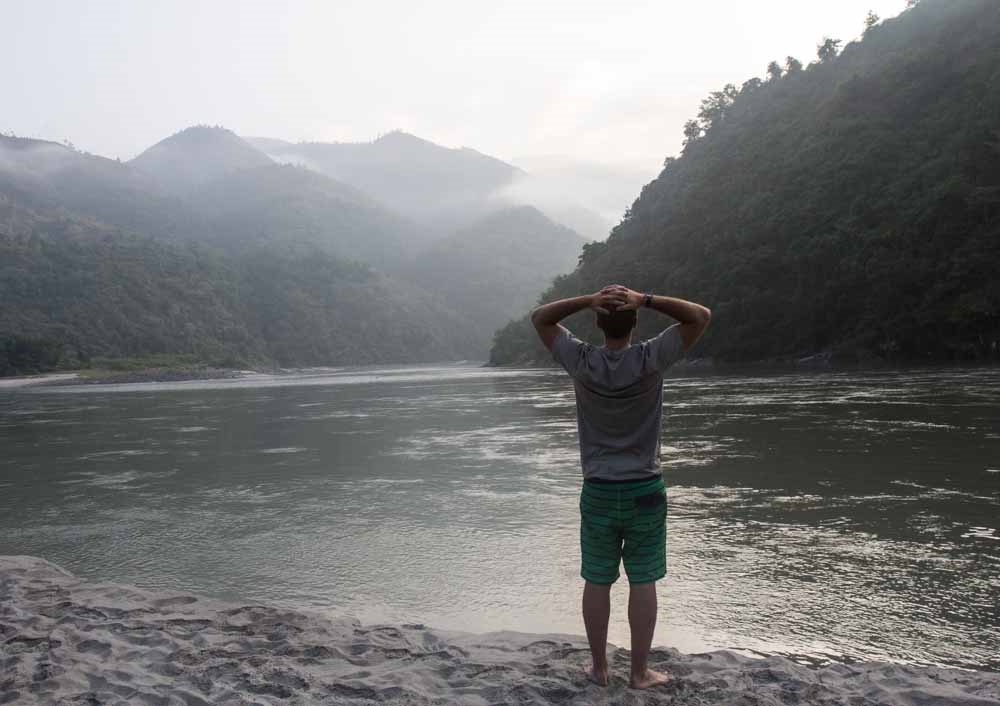 Chris has seen significant improvement in the camping facilities offered by kayaking and rafting companies since his first visit in 2009. He believes that if kayaking in Nepal continues to develop as it currently is, the river routes could parallel the trekking routes that have been drawing visitors for decades. That is, the infrastructure could develop to a point where more permanent lodges or campsites dot the rivers. At present, companies running multi-day river excursions along the Sun Kosi or the Tamur, for example, stop at clean, empty beaches and set up their own camps: a spotless kitchen and a dug-out toilet behind a tarp. However, Chrissy Dawkins doesn’t believe that this level of development along Nepal’s rivers is likely anytime soon. While camps have been emerging along the Trishuli, Nepal’s most popular paddling river, Chrissy doesn’t believe that the volume of tourists coming to kayak or raft in Nepal is enough. However, she says that it is becoming easier for their multi-day trips to replenish food supplies from new settlements along the rivers, which sometimes run parallel to newly-built roads.

As well as being a mecca for experienced kayakers, Nepal is now also an ideal place to try kayaking for the first time or build on basic skills. New Zealander Hannah Hadley had never done any ‘serious’ kayaking until she took two back-to-back multi-day kayaking trips in Nepal this November. Beginners can start with one-day kayak clinics on rivers close to Kathmandu or Pokhara, and work their way up from there. Many trips also offer the option of rafting, or combining rafting with kayaking. Plentiful large rapids mean that rafting is certainly not the ‘easy’ option, although it doesn’t require the same level of skill or experience as kayaking.

According to Nepali guide Ramchandra Chumi, the biggest threat to these multi-day, multi-skill-level trips is the construction of upriver dams. It used to be possible to take five-day trips along the Bhote Kosi and Kali Gandaki rivers, but after the construction of dams, these have been reduced to three days. Dam construction projects are proposed or in development along several other rivers, although at present the Sun Kosi is safe. 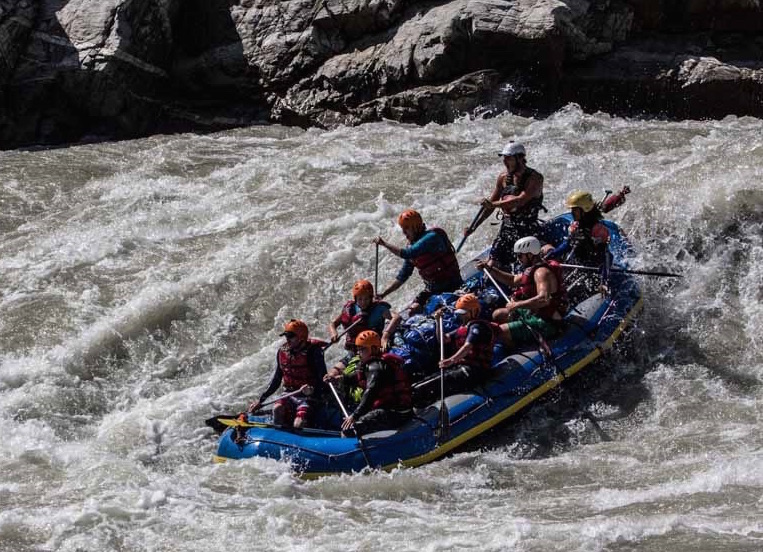 A tentative new contender for attention in Nepal’s adventure tourism scene is pack-rafting, which combines the best of both the kayaking and trekking experiences. Tom McShane, a British adventure travel specialist, was recently in Nepal for a documentary film shoot. His trip involved kayaking down the Melamchi River in a pack-raft, a form of inflatable kayak small and light enough to be folded down into a backpack. Use of pack-rafts is, as Tom says, “very much in its infancy”. Their main advantage is that because of their size, they can be carried anywhere, such as on a trek, and inflated when needed. Very remote areas become more accessible and navigable. As far as Tom is aware, pack-rafts had only been used on Nepal’s rivers once before his expedition. In fact, the Melamchi River had only been paddled once before, by GRG’s Maila Gurung.

With the ability to cater to travellers on every level of the experience spectrum, Nepal is ready for wider recognition of its beautiful, varied and accessible rivers. Word needs to get out that Nepal is still an ideal place for adventurous travelers even after 2015’s difficulties. “People have been rafting and kayaking in Nepal for years,” says Tom, “just like they have been trekking. But like with the adventure travel industry in general in this country, it is blighted by the issues that affect Nepal—earthquakes, politics, strikes, fuel bans. Unfortunately, the images portrayed in the media are what most people rest their [travel] decisions on. But Nepal is very much open for tourism and always will be, no matter what emergency hits them.”

(The author was in Nepal as a participant in ATTA’s Adventure Week Rebound Nepal, and was a guest of GRG’s Adventure Kayaking on the Sun Kosi River).

Tagged
Outdoor Paddling Student Work Nepal
What did you think of this story?
Meh
Good
Awesome