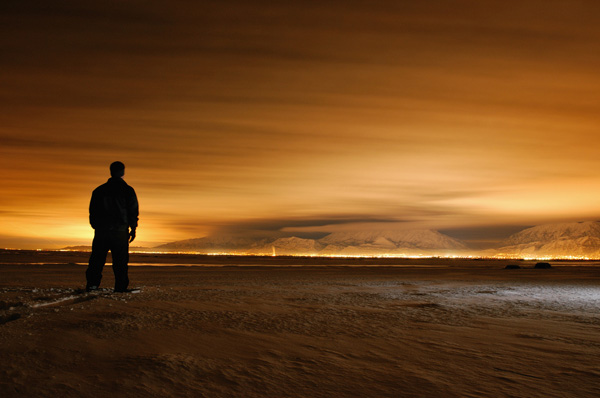 Snowshoeing may not be the the most glamorous winter sport out there, but it’s certainly the most versatile. Quieter than a snowmobile, more manageable than cross-country skis, and a whole lot cheaper than a day at a ski resort, snowshoes can take you off the trail and deeper into any snow-covered wilderness.

The Black Hills National Forest includes designated snowshoe areas in the Spearfish area, including 6,000 explorable acres in Custer State Park. But for a real winter trek, look no further than the Centennial Trail. This grueling 111-mile track begins at Bear Butte Lake and heads south to Wind Cave National Park, passing seven lakes and the occasional free-roaming buffalo along the way.

Known to be the wildest stretch of terrain found on the Appalachian Trail, Maine’s Hundred-Mile Wilderness falls between Abol Bridge and Monson. 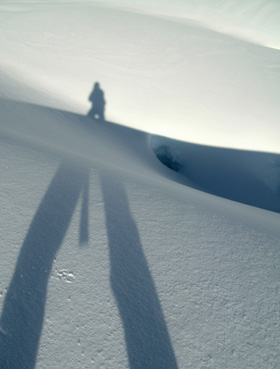 The Appalachian Mountain Club maintains two lodges and a large number of trails in the area, including over 50 miles on the Katahdin Iron Works property near Little Lyford. Built in the late 1800s, the Little Lyford Pond Camps make a cozy home-base for exploring this remote area.

The White River Trail in Mt. Hood National Forest starts out in one of the most popular and easily accessible winter recreation areas. It begins at the White River West SnoPark and heads to “The Bowl,” an old rock quarry that families now frequent for sledding. From this point on, the crowds thin out, leaving you alone with the best snowshoe terrain.

Enjoy the next few miles, as it’s a mellow walk with views of Mt. Hood’s peak ahead. If you choose to continue along the Boy Scout Ridge, you’ll gain a total of 1,800 feet of elevation and an extremely ripped set of calves.

Banff National Park is worth every cheesy line in the book. A jaw-dropping, spectacular, wilderness gem, the park’s 2,586 square miles of cliche-inducing terrain looks straight out of a Disney movie.

Warm up your snowshoes by walking 1.3 miles of flat terrain around Lake Louise. From there, ascend up 1,300 feet to the Lake Agnes Teahouse and try not to cry when you see the chateau and lake below. 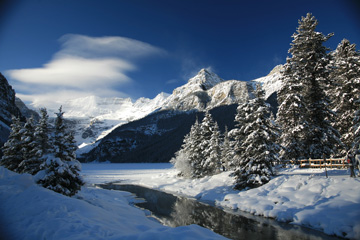 New Hampshire’s White Mountains are known for having one of the longest snow seasons in the United States — and some of the most unpredictable weather as well.  Clueless or unprepared snowshoers are rescued out of this area pretty regularly, so be sure you know where you’re going and be fully equipped for the cold.

If you’re up for the challenge, try for one of the many summits along the Presidential Range. The elements are unforgiving at altitudes higher than treeline, but for experienced winter climbers and snowshoers, the terrain and views are worth the effort.

If frostbite and crampons aren’t quite your thing, the White Mountains of New Hampshire have an alternative. What better way to ruin a potentially vigorous snowshoe workout than by stuffing your face with chocolate?

The Mount Washington Valley Ski & Snowshoe Foundation puts on an annual Chocolate Festival, where you can snowshoe your way through 40 miles of trails, sampling chocolates along the way.

Though Yellowstone National Park has hot springs to spare, hopping in for a soak is out of the question. Not only are they off-limits to humans, most of them are likelier to burn your skin off than relax.

Instead, try Huckleberry Hot Springs, just 2 miles south of Yellowstone. To reach this undeveloped area, begin at Flagg Ranch and put on your snowshoes for a scenic march along the Snake River. These isolated springs are more often visited by bison than other snowshoers and cross-country skiers, so feel free to take your pants off. 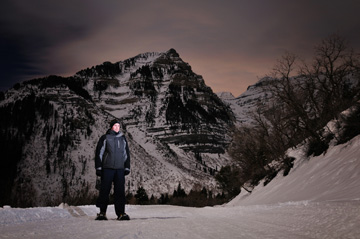 The second highest peak in the Wasatch, “Timp” is one of Utah’s most hiked mountains.

The trail from the Mount Timpanogos parking lot starts with a two-mile climb up the mountain. Once it levels out, follow the Alpine Loop Road through the aspens to the top of the loop for a view that will stop you in your tracks. No, really, it’ll stop you — the trail narrows here so you can’t go any further anyway.

Take in the sights as carefully as you can here — this area is known for its deadly avalanches.

One of the most visited national parks in the United States, Yosemite has been seen and photographed from just about every possible angle. Yet, once the snow falls, the park presents snowshoers and cross-country skiers with a seldom seen and constantly changing landscape.

The seven-mile loop from Badger Pass to Dewey Point is one of Yosemite’s most popular snowshoe treks — and for good reason. Once you reach your destination, directly across the valley from El Capitan, be sure to check left toward Ribbon Falls before gazing to your right to see Cathedral Spire and Taft Point. Then, if you have an iron gut and balls the size of Half Dome, look down at the valley floor 3,000 feet below.

Though the Bonneville campgrounds close for the winter months, the hot springs stay open year-round. While the snowshoe hike out to the pools may not be the the most challenging, I can’t think of a better ending to the day — even if you’re not all that tired. 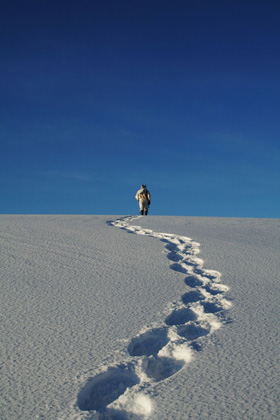 No leisurely strolls and post-snowshoe cocoas here. The isolated North Slope, as far north as you can get in Alaska, is a vast expanse of nothing but white.

So, why should you bother? Well, unless you’re the ruggedest of rugged adventurers, you probably shouldn’t. But if you’d like to dedicate a week or two of solitude to breaking your own trails in a trail-less world and hunkering down in arctic winds, then you’ll be opening yourself up to a land that very few people have set foot upon and the opportunity to spot some of the most varied wildlife in the arctic.

The Arctic Circle is no joke. Make sure that you’re fully prepared for one of the harshest climates on Earth. Better yet, go with an expert as your guide.

For the perfect day of hiking and Colombian coffee, head to Jardín
The 10 best US national forests to visit with a dog
Diversifying the lineup: changing the white face of surfing
The best places to camp in all 50 states
How Rob Lea invented and crushed the Ultimate World Triathlon

How a summer in Yosemite National Park changed my life