Truly epic ski trips, on the other hand, I measure by a different count: number of resorts. No matter how close together two areas are, each has its own vibe, its own terrain, its own locals, its own stashes.

Here are some of the best thoroughfares on the continent that weave big mountains into big trips. 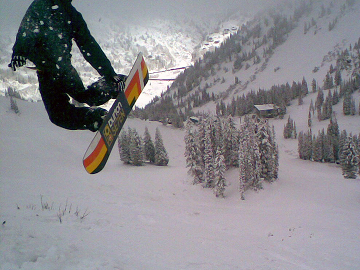 Cutting below the 11,000ft peaks that look much larger up close than they do lining Salt Lake City’s skyline, Wasatch Boulevard is the ticket to the “Greatest Snow on Earth.”

It’s exit 6 off I-215, from where it takes you away from the city sprawl and on a relatively forgettable ride through some commercial and residential neighborhoods.

Fortunately, it’s not about great scenery. What it’s about is that dark, angry cloud hanging over the mountains to the east.

If the dump is particularly bad and you don’t have a 4WD with snow tires or a two-wheel with chains, stop at one of the park-and-rides along Wasatch and let the UTA bus with automatic tire chains finish the journey for you.

Up until the traffic light for Big Cottonwood Canyon, you don’t really need to know where you’re going. You can save that decision for the last minute.

Either turn left and wind your way up to the uncrowded, hike-to paradise of Solitude and board-centric Brighton, or roll straight through, eventually hitting the climb up Little Cottonwood Canyon, where Snowbird serves big terrain fast and Alta caters to powder purists. 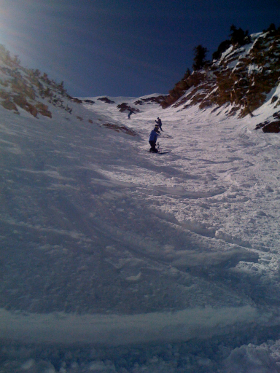 No matter which you choose, you’re looking at 500 inches of annual — 500 of desert-wrung, ultralight blower — so the chance to be a part of the biggest, sickest snowstorm you’ve ever experienced is always in the air.

Once you commit, it’s upward past the flashing yellow road condition sign and onward to your chosen endpoint.

As you climb either canyon, don’t be surprised if the snow cover is thin at the beginning; it gets noticeably deeper the farther you drive. Once at the top, you may not be seeing Wasatch Boulevard again for a few days.

When the snow is at its best/worst, authorities close off the Cottonwoods, particularly Little Cottonwood, for hours — even days. And all that’s left to do is be thankful you’re not trapped on the other side of the gates, because from here it’s endless face shots for you and the few lucky bastards around you.

Detour: The 7-11 at the corner of Fort Union Blvd and Wasatch isn’t the most gourmet ski morning stop, but it’s the go-to for draining the morning pot of Colombian and grabbing a breakfast biscuit.

This Interstate is not only the road to just about every one of Colorado’s 26 resorts — it’s the gateway to the Rockies in general, where the plains of the American Midwest finally give way to more dynamic topography. And when an Interstate climbs and drops through valleys and passes below 13 and 14,000ft mountains, it’s not the typical exhaust-huffing highway experience.

The journey begins outside of Denver, where you’re likely driving south from DIA. The shadowy gray and white mountains stand powerful in the distance, and they’ll only get larger as you drive west on 70. 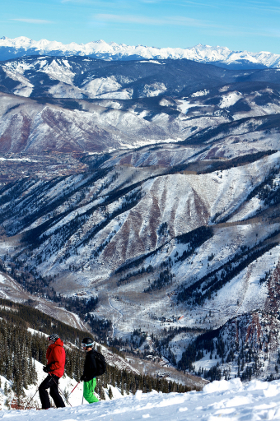 Loveland, a resort that peeks out over the Eisenhower Tunnel and sits on the Continental Divide, is the first stop on the tour about 50 miles in. Surprisingly, given its location, it’s not a big-draw destination resort like many Colorado ski areas.

That’s got nothing to do with its skiing, though; Loveland has a respectable 1,570 acres dropping down 2,210 feet of vert. It’s also one of Colorado’s highest resorts, hitting its peak just above 13,000 feet, which means 400 inches of snow a year and one of the earliest openings in the country.

Past Loveland, it’s on to Summit County. Here, big names like Breckenridge and Keystone sprawl out a few ridges over from more core Coloradoan experiences like A-Basin. All can be accessed either right off the highway or a short drive from the exit ramp.

Colorado ski country continues after Summit, albeit a little less densely. Resorts like Vail and Beaver Creek are right off 70 in Eagle County, and more distant mountains like the lift-in-the-backcountry experience at Silverton and the ever-expanding expert-centric Telluride are connected by state highways farther west.

In fact, not until you’re nearly out of the state does I-70 give up its ski highway status. By that time you could have had a lifetime of ski trips.

Detour: Before skiing took over, the Rockies were all about mining. Idaho Springs is a small outpost next to I-70 that reminds you of that. It’s a good place to grab a meal and/or supplies before heading into overpriced resort country.

I’ll never quite forgive the Tommyknocker brewpub for getting rid of its fried chicken, but the Buffalo Roadhouse Chili and Green Mountain Burger help ease the pain. 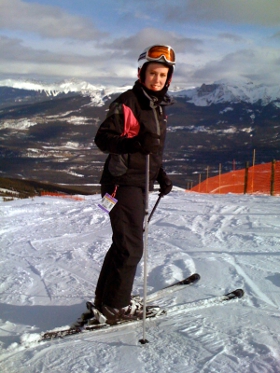 More than a road to a resort parking lot, Trans-Canada Hwy 1 and the branchoff onto the Icefields Parkway (AB-93) is one of the most spectacular roads in the world, any time of year. National Geographic ranked the greater route one of its “Drives of a Lifetime.”

The trip from the town of Banff to Jasper is 180 miles of highway, connecting two of Canada’s most memorable Rocky Mountain-region national parks of the same names.

Banff is home to smaller, locals-oriented Mount Norquay, one of Canada’s oldest ski resorts, and Sunshine Village, a resort that pushes the limit of backcountry-style, within-the-lines terrain in areas like Delirium Dive and Silver City. Sunshine has some of the best snow in Alberta with 360 inches and also one of North America’s longest seasons, usually stretching into May.

Again, you’re in Canada’s most popular national park, so the scenery is big from minute one. Continuing on, the drive takes in dark stretches of evergreens topped by serrated peaks. Most notable among them is Castle Mountain, a 16-kilometer-long hunk of raw rock that looks from many angles like a mountain peak atop a flat-top that cuts straight out of the earth.

To continue, turn onto AB-93 (the Icefields Parkway) for the rest of the journey. Even if you don’t end up skiing, snowshoeing, or getting out for a pit stop, you’ll have a camera-full of vacation by the time you reach the village of Jasper.

You’re driving into the heart of Rocky Mountain wild country, passing turquoise lakes, through deeply cut valleys, below peaks and glaciers — each of which somehow manages to have its own distinct character within the greater pack — and by the namesake Columbia Icefield, which borders the two parks. 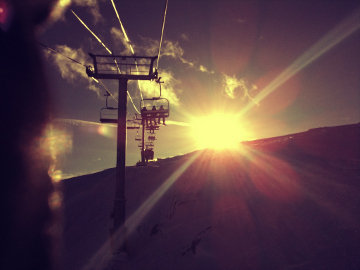 Some specific names to look out for include Peyto Lake, the Crowfoot Glacier, and Mount Athabasca. In addition, moose, elk, wolves, mountain goats, and other wildlife are commonly seen.

Just outside Jasper is Marmot Basin, one of the less-heralded mountains in the region. It’s not as big as the Banff/Lake Louise resorts and its host park not quite as popular, but Marmot Basin still gives the full taste of Canadian Rocky skiing.

160 inches of dry powder. 3,000 feet of vertical. Over 1,600 acres for all abilities — everything from groomers and trees to wide open bowls and steep chutes. And, of course, big views of the national park.

Detour: There are no services on the Icefields Parkway during winter, so stock up on food and gas before leaving Lake Louise. Similarly, Banff’s selection is infinitely better than Louise’s — grab a burger smothered in Rutting Elk Red BBQ Sauce and a pint of Powder Hound Pilsner at the Grizzly Paw Brewing Company and beeline it for Jasper from there.

Next Page
Tagged
Winter Sports Trip Planning
What did you think of this story?
Meh
Good
Awesome

How one wildlife photographer captured this award-winning shot 8 animals that take hallucinogenic drugs and enjoy it 7 best places to see dazzling bioluminescence For the perfect day of hiking and Colombian coffee, head to Jardín The Osa Peninsula is Costa Rica’s last wild frontier