At first glance, Georgia appears dark and dangerous. On our first day in the capital Tbilisi, we descended into a barely lit metro station. A sea of people dressed in black with long dark faces to match, took us in with curiosity as we boarded the train. Kids craned their necks around parents to get a peek at us.

“What have we gotten ourselves into?” we wondered.

Appearances couldn’t be more deceiving. Over a month later, we found it difficult to tear ourselves away.

Most of us had barely heard of the Republic of Georgia until the conflict with South Ossetia, Russia and Abkhazia erupted in August 2008. Georgia will again become safe for travelers long before the image of Russian tanks rolling through its towns dissolves.

Here are ten reasons why you should keep Georgia high on your travel wish list.

Mention Georgia to someone who has visited, and he’s likely to place a hand over his heart, “Oh, the people.” Friendly, spontaneous, passionate, Georgians have a deserved and growing fan club.

Strangers took us under their wing to proudly show us their city, their country, their lives. We were overwhelmed with invitations and genuine kindness.

Simply put, the Georgian people alone are worth a visit.

The second response from those who have visited Georgia is to put a hand over their stomachs, “Oh, the food!” Though Georgian cuisine is relatively unknown in the West, it was deservedly viewed as the best food in the whole of the Soviet Union.

Influenced by Turkey, Persia and Greece, Georgian cuisine is unique. One part comfort food and another part fine cuisine, it stands on its own. Seek out warm, gooey khachapuri (cheese-stuffed bread) rich pkhali (spinach with ground walnuts and garlic), and broth-laden khinkali (herbed meat dumplings),

You’ll undoubtedly be invited to a Georgian feast, called a supra. Accept the invitation and you will find yourself inundated with food, drink and an endless string of emotional, long-winded toasts delivered by the tamada (toastmaster). It’s something you will never forget. 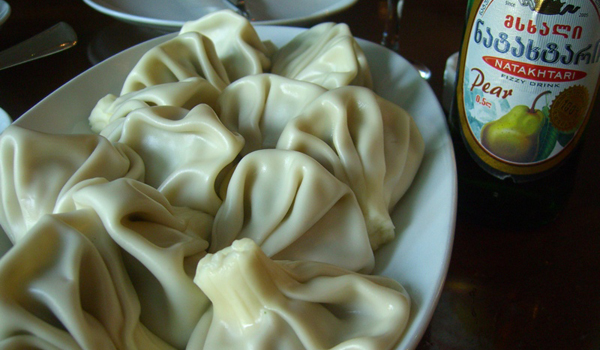 During our visit, every day seemed a new adventure. Planning was unnecessary, for experiences unfolded naturally. One day we met some locals at a picnic table in the hills; the next day we were on a forest-bound adventure to discover some 8th-9th century caves and picnic in the shadow of a ruined 800-year-old church.

Georgia is a land of pleasant surprises. You’ll repeatedly say to yourself, “I couldn’t have planned this if I tried.”

Georgians don’t utter word “guest” lightly. Since they view guests as a gift from god, the term carries real meaning. And although many Georgians may have very little, they won’t hesitate to share every last bit of it. We were often treated to meals and experiences that left amazed, touched and humbled.

At the covered food market in the western Georgian town of Zugdidi, we asked a honey vendor if she knew of a restaurant where we could find lobio, a Georgian bean dish we had been seeking. After a flurry of conversation and activity, a veritable feast – including the dish we sought – appeared in front of us. Salad, bread, adjika, honey and cha cha (the Georgian version of grappa), were all provided by the neighboring vendors.

When we tried to reciprocate, Leila, our host responded in Russian: “You are our guest. Welcome.”

Tbilisi, Georgia’s capital city, has to be one of the most authentic and charming capital cities in Eastern Europe. It has been ruled and razed by over a dozen different conquering forces since its emergence in the 5th century. Always at an historical crossroads, Tbilisi features a diverse community, to which its Georgian Orthodox Church, Azerbaijani baths, Jewish synagogue and Armenian church – all located within a few blocks of each other – will attest. A walk through Tbilisi’s old town is a walk through Caucasian history.

The ideal way to explore Tbilisi: get lost in its unrenovated back streets. Life unfolds in the courtyards and on sagging balconies. Don’t be afraid to poke your head into a courtyard or two, where you may receive a history lesson or be treated to an impromptu serenade of Georgian folk songs. 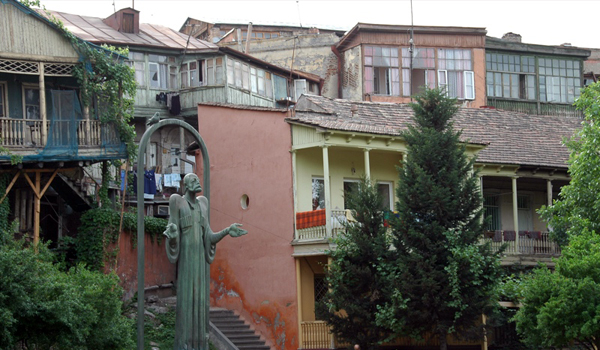 Having traveled extensively, we were saturated with churches and temples. But Georgian Orthodox churches – alive with people and filled with incense, history and an unassailable mysticism – were something else altogether.

Take Svetitskhoveli Cathedral in Mtskheta, the most holy of Georgian churches. Just outside of Tbilisi, it has been a place of worship since the 4th century. This cathedral and its atmosphere proved one of the most powerful and moving experiences of our travels throughout Europe and Asia.

The fabled region of Svaneti, nestled in these mountains, is a place of magic and fear, even for Georgians themselves. Access to peaks like Mount Shkhara (5,201 meters) and Mount Ushba (4,710 meters) and opportunities to stay with Svan families in villages make trekking in this region an outdoor and cultural adventure. 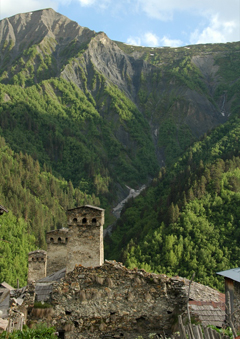 Georgia claims to have invented wine. While other countries may dispute this assertion, there is evidence of wine production in the region dating back to 5,000 B.C.

Kakheti, Georgia’s wine region, is the ideal place to fully absorb Georgian wine culture. The region even features a home-stay network to help visitors learn about local wines. In autumn, take in a village wine festival or two.

Georgia’s depth of history – both ancient and modern – is laid bare right before your eyes. Ruins of a thousand year old church and living monasteries that date to the Middle Ages sit amidst crumbling Soviet remains.

In a Soviet-era Volga sedan, we trundled along to the 12th century monastery at Vardzia (a lesser-known network of Christian church caves like those in Cappadocia, Turkey). From the hillside caves, we admired a defunct, monstrous Soviet hotel dating to the Brezhnev-era. History, near and far, is always present.

Though travel agents would like to convince you otherwise, independent travel in Georgia is not only possible, it’s delightful.

Sure, you might end up crammed into a minibus (marshrutka) screeching around turns and floating on downgrades as the driver cuts the engine to save on petrol. But you’ll have several women taking care of you along the way, offering up food, drink and a phone number to call in case you have problems.

While traveling independently in Georgia may offer some challenges, it’s not particularly frightening, dangerous or difficult. But it is rewarding. And it will leave you feeling like a rock star and provide you endless stories to share afterwards.

Republic of Georgia Map by ITMB

Tagged
Insider Guides Georgia
What did you think of this story?
Meh
Good
Awesome

Lost in Translation: The 'Alphabetic Tower' in Batumi, Georgia

Profile of the Most Interesting Man in the World

To American Expats: Please Don't Come To Georgia Until You've Understood These 5 Things

How To Visit the Katskhi Pillar in Georgia