SURABAYA IS INDONESIA’S second biggest city, the capital of East Java, and typically only sees tourists as they pass through on their way to Mount Bromo, Probolinggo, Bali, Yogyakarta, and Ijen.

I’ve spent the last 18 months living in Surabaya as an English teacher and have come up with several reasons why the city deserves more than a layover.

Reportedly named for the neighborhood’s first Dutch madam, Dolly is a busy red-light district with a constant stream of vehicle and foot traffic, soundtracked by the beat of dangdut (a pop mix of Arab and Hindu influences featuring guitars, synthesizers, tablas, and flutes) emanating from the bars that line its narrow lanes.

Dolly is pretty contained — just a few streets away from Gang Dolly (Dolly Alley) is a nicely kept kampung of schools, homes, and mosques. If you’re staying somewhere centrally located, like the Shangri-La hotel, any pedestrian will be able to point you in the right direction. 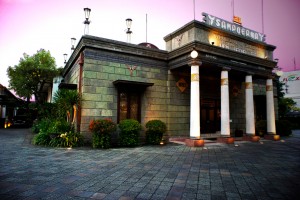 2. Take the Heritage Tour at House of Sampoerna

House of Sampoerna is a free-entry museum that houses local art and historical exhibits on both Surabaya and the cigarette company that owns the facility. (A highlight is watching workers hand-roll kretek, or clove, cigarettes. Call first to check times — I was disappointed to have missed it on my first visit.)

The museum also organizes the Surabaya Heritage Track bus tour. Tickets cost IDR1,500 (about USD$0.20), and the bus was built to resemble the trams that once navigated Surabaya’s streets.

Check the website above for track destinations — themes changes monthly — and departure information.

3. Have high tea at the Majapahit

At Hotel Majapahit, 53,000 rupiah (~USD$6) pays for tea, sandwiches, and sweets served on a three-tiered platter. (I prefer to start with the top tier — dessert.)

High tea is served from noon to 6pm. A great followup is a walk through the hotel gardens — a series of grassy courtyards and fountains surrounded by date palms and massive hardwoods.

Ask the front desk for one of their historical information packets and try to picture what the hotel was like as a prison camp for Dutch women and children and barracks for the Japanese during World War II. 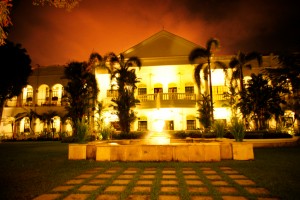 I’ve never been brave enough to give it a try, sticking instead to the snout-less rujak manis, a sweet fruit salad topped with peanut sauce and optional hot chile.

It’s also possible to try the other end of the cow in Surabaya — sop buntut, or oxtail soup, can be found in most restaurants and features ginger, garlic, carrots, and potatoes.

Around four million people live in Surabaya, and gridlock traffic is a way of life. This makes an ojek (motorcycle taxi) the quickest way to get around. It’s pretty fun to join the organized chaos and watch families of five go scooting between cars and becak on a single motorbike.

You can also ask your hotel/hostel to arrange one for you. Prices are negotiable, but expect to pay around IDR25,000 (~USD$3) for a 20-minute ride.

Martha Tilaar has created a cosmetic empire with over 1,000 products, including makeup, massage oils, and skin care. Day spas are located inside the Hotel Majapahit, at Jalan Raya Dukuh Kupang Barat No. 121, and at Jalan Diponegoro No. 17A.

My favorite treatment is the 90-minute “Facial Biokos” at the Majapahit. Cost: IDR225,000.

Persebaya is the hometown Indonesia Premier League football team, and the bonek are their super-rowdy die-hard supporters. Best to leave valuables at home and go with a friend.

Buy your tickets at the Gelora 10 Nopember Stadium Surabaya on Jalan Tambak Sari, and make sure to show up in green; the notoriously aggressive bonek may not take nicely to any other color. 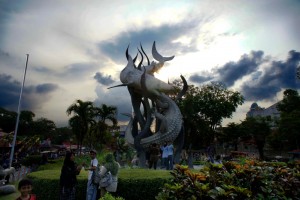 8. Get mobbed at the Surabaya Zoo

An imposing statue of the city’s namesake stands at the entrance: a giant white crocodile circling an equally sizable white shark (suro means “shark” and boyo means “crocodile” in Javanese).

The zoo itself is a nice, shaded escape from the heat and noise of Surabaya, but the animals’ enclosures could be bigger, as well as cleaner.

Odds are you’ll attract more attention than the exhibits, though, with gangs of teenagers asking to take your picture.

The area around the Arab Quarter, where the mosque is located, is very conservative. Learn from my mistake — if you want to enter the mosque, trousers and covered shoulders are required for men and women alike.

Ampel Mosque is where Sunan Ampel was buried in the late 1400s; he’s credited with bringing Islam to the island of Java, and his mosque is one of the city’s most sacred sites for Muslims. 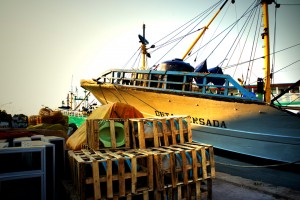 The boats were traditionally constructed on the beaches of Sulawesi by the Konjo and Bugis people, but these days dwindling lumber sources have lured builders to Papua and Kalimantan.

The impressive vessels are filled to capacity with items that can’t be shipped in modern containers — live animals and flammable materials, for example — or items destined for remote ports that lie outside standard shipping routes.

A Day in the Life of an Expat in Surabaya, Indonesia