“WE ARE THE TEXAS of Canada. Oil. Beef. And big. Bigger and better everything,” Alley Kat Brewing Company’s spunky PR girl proudly told me. After an afternoon sampling the microbrewery’s World Beer Championship-winning pale ales and lagers, I decided Kirstin was right. Everywhere I looked, I witnessed proof of Edmonton’s bragging rights.

1. Edmonton is one of Canada’s sunniest cities.

It logs nearly 2,300 hours of sunshine a year. In June, the city gets 17 hours of daylight / day — soggy Vancouver’s quota for the entire summer. (Edmonton averages 475mm of precipitation / year, a drop in the bucket to Vancouver’s 1,200mm.)

2. Edmonton is verdant, split like a storybook by the Saskatchewan River. 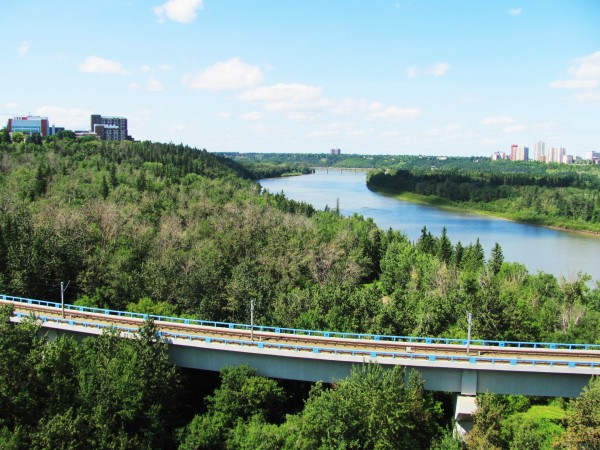 North America’s longest corridor of connected urban parkland runs along the city’s river valley. Minutes from the commercial stretch of Whyte Avenue, a set of stairs leads to paths that snake through the woods of one of Canada’s greenest cities, an area comprising over 20 major parks and which is 22 times larger than New York City’s Central Park. Intelligent urban planning ensured that infrastructure doesn’t interrupt the trees…or the mosquitoes. (Edmonton mosquitoes are belligerent, big, and skillful biters.)

It hosts more than 30 festivals annually, from the Accordion Extravaganza to the rodeo. The Edmonton Folk Music Festival has been running since 1980 and attracts big names — the 2012 headliners included vocal powerhouses Mary-Chapin Carpenter, Jim Cuddy, and Bonnie Raitt.

Kinsella is the author of Shoeless Joe, the novel that the movie Field of Dreams was based on.

5. The city has Canada’s largest planetarium.

Telus World of Science is in Edmonton. (And, from Gallagher Park, where the August folk fest is held, you can see real stars after dark, in the city.)

6. Edmonton once had the world’s largest mall.

The West Edmonton Mall spans the equivalent of 48 city blocks and now ranks 5th largest. Inside, you’ll find the world’s largest indoor lake (with four submarines and 250 different types of marine life), and an indoor wave pool (12.3 million litres for 40,000 swimmers). There’s also the Mindbender — the world’s largest indoor triple loop rollercoaster at 4,189 feet long and with a 5-G force in the second loop — and the world’s largest indoor permanent bungee tower (106 feet). This is in addition to a NHL-sized rink, a shooting range, a replica of Christopher Columbus’ Santa Maria, Sea Life Caverns and its turtles, sharks, and penguins, a 6-acre water park, and a chapel that seats 55. There is parking for 20,000 vehicles. 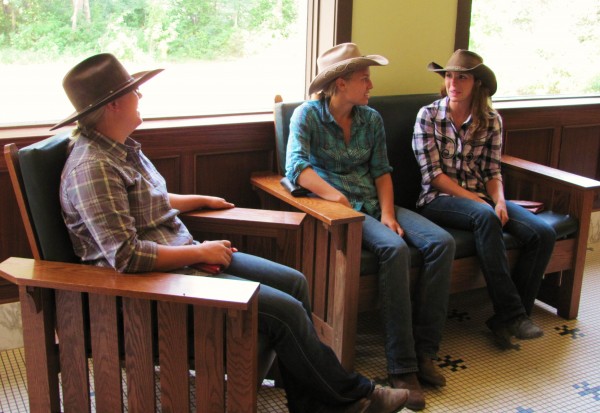 That’d be Fort Edmonton Park, also site of Hotel Selkirk’s classy 1920s saloon, the Mahogany Room, where you can still find $1 pickled eggs behind the counter. It used to be the longest bar in Canada, until it was ousted by the 100-foot span in the Grand Banking Hall of Toronto’s One King West hotel.

8. And the world’s highest streetcar bridge.

Built in 1912, the High Level Bridge Streetcar is tallest in the world; the panoramic ride costs $5.

Though he became famous as big bro Alex P. Keaton on the sitcom Family Ties, Fox’s career highlights also include Teen Wolf, Back to the Future, and Spin City. His film and television career has netted him four Emmys and four Golden Globe Awards.

10. “Highest density of hoofed mammals per square kilometre in the world*.”

Such is the claim of Elk Island National Park, an hour’s drive outside of Edmonton.
*With the exception of the African Serengeti.

11. Canadian novelist Will Ferguson said it best in Beauty Tips From Moosejaw.

I am from the land of enormous objects and big-ass highways. A land of fibreglass landmarks and open skies.

Check out the giant cowboy boot at Stallion – One Stop Biker Shop at 10007-167 St. NW, formerly the Western Boot Factory. The big boot is where to kick off a roadside attraction road trip. Huge fibreglass monuments in the greater Edmonton area include the world’s largest Easter egg, the biggest Mallard duck, giant mushrooms, the largest pyrogy, an oversized sausage, and the world’s first UFO Landing Pad.

Tagged
Insider Guides Edmonton, Canada
What did you think of this story?
Meh
Good
Awesome
✖
travelstoke
Download the mobile app
stoked by