THE OLDEST NATIONAL PARK in the Eastern US covers the majority of Maine’s Mount Desert Island (MDI), along with a few outlying islands and nearby peninsulas. MDI itself is home to several long-established towns (Bar Harbor chief among them), which gives Acadia a “lived-in” vibe you don’t get in national parks in other parts of the country. For visitors, this means the best of both worlds — access to spectacular natural landscapes mixed with the convenience and cultural amenities of coastal Maine living.

Here’s a quick hit list of some of the most extraordinary places — and their accompanying views — in and around the main section of the park on MDI. 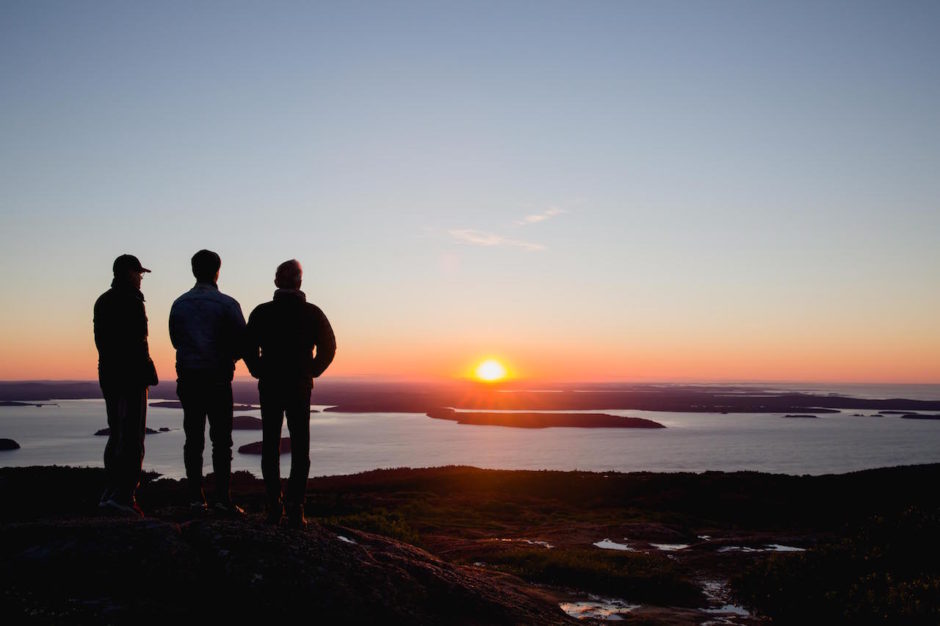 Cadillac stands as the highest point along the North Atlantic Seaboard at 1,530 feet. It’s a popular spot at sunset, but it’s peak time is most definitely sunrise. This is because, each day from early October to March, its summit is the first place to see the sun come up in the entire United States.

The summit of Cadillac is easily accessible by car, but if you truly want to earn that sunrise experience, you should hike it. Begin your ascent at least two hours before sunrise, when it’s still dark out. The West Face Trail is the shortest route up at 1.4 miles, but its steepness is challenging. When you finally reach the top, break out a thermos of coffee and some bagels from Morning Glory Bakery and find a quiet place to sit and wait for the day to begin. 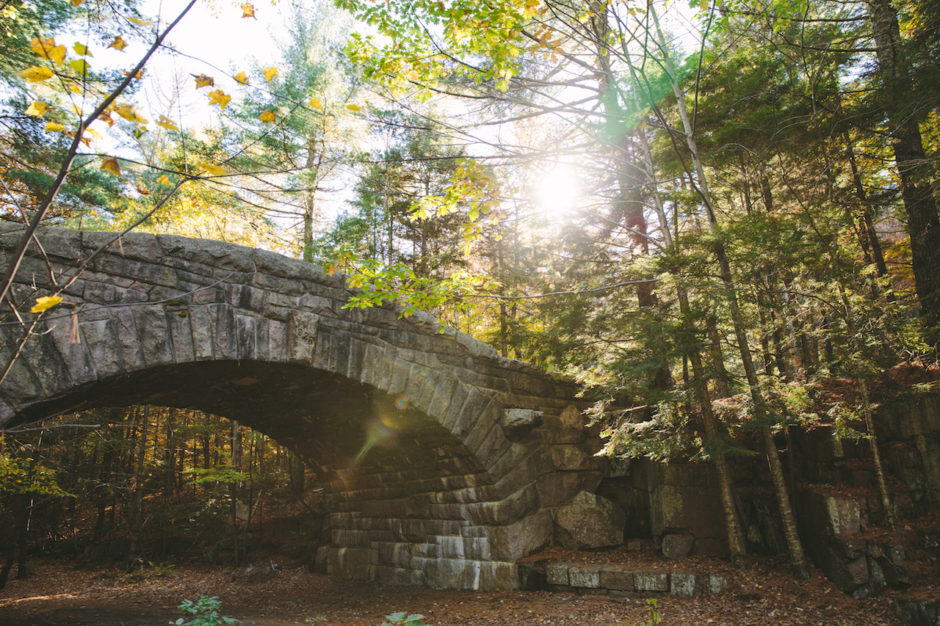 The Rockefeller family has a prominent and welcomed presence on MDI, and one of their biggest contributions to the community has been the Carriage Roads. When John D. Rockefeller, Jr. moved to the Island in 1910, he worried that automobiles would soon overrun the landscape, compromising its beauty and solitude. To combat this, he initiated the Carriage Road project in 1913.

This 57-mile trail system took 27 years to build, all by hand. Rockefeller employed community members, sourced every stone locally, and designed the system to blend with the natural landscape. He made sure to have enough vistas cleared so that all the best lookouts points in Acadia would only remain accessible by foot, bicycle, or horse.

Rockefeller had to design with Maine’s rugged and wet conditions in mind, so throughout the system you’ll come across massive stone bridges that pass over streams or even have another trail passing underneath them. It’s incredible to walk beneath these bridges, look up, and imagine each stone being laid by hand more than a hundred years ago. The Carriage Roads are maintained by the park, and the Rockefeller family continues to improve them — today they cover 15,000 acres, and David Rockefeller recently donated an additional 1,000 acres to the project in celebration of his 100th birthday. 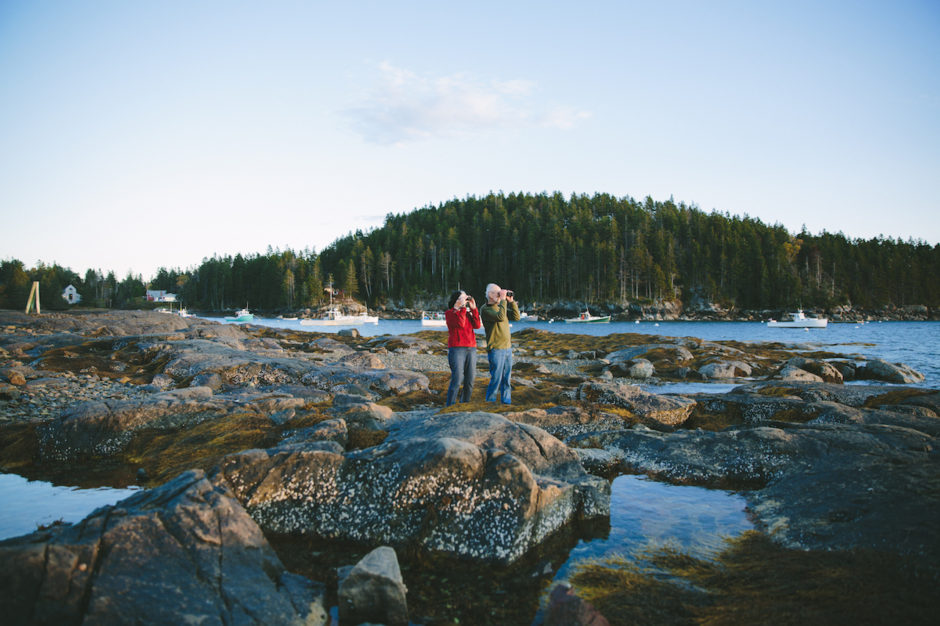 Seal Harbor is a year-round community located on the southeastern side of Mount Desert Island. It’s a bit quieter than what you’ll find in Bar Harbor and Southwest and Northeast Harbors, and although it’s known as a place where wealthy “summer people” reside, there’s also a local community with families that predate the tourism industry on MDI.

One of the best places to take advantage of in Seal Harbor is the public beach off Route 3. In contrast to Acadia’s signature beach (Sand Beach, a large, open stretch of sand that’s good for swimming in the crashing waves), the beach in Seal Harbor is remarkably less crowded. There’s a parking lot right across the street, as well as public restrooms. Another recommended place to check out near Seal Harbor is Little Long Pond, which has an off-leash dog area and a mellow trail beneath hills covered in wild blueberries come August. 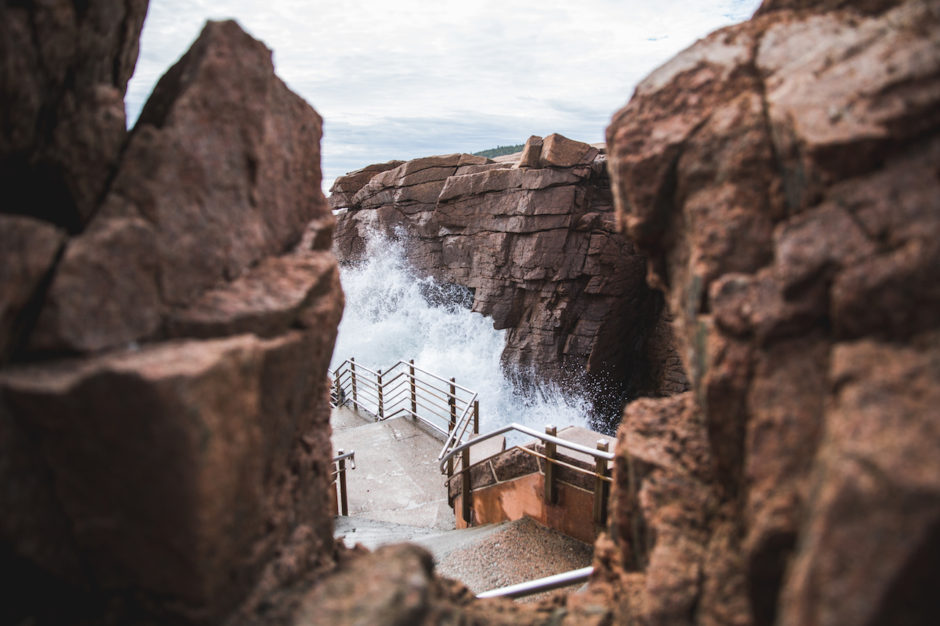 If you’re hitting Sand Beach, make sure to include a stop at Thunder Hole as well. When a powerful enough wave crashes into the inlet here, spray shoots up out of a gap in the rock as high as 40 feet. If a significant storm has happened somewhere else in the world, and conditions are just right, people will travel from all over to see how Thunder Hole reacts. In the off-season in an El Nino year, I’ve seen waves crash onto passing cars on the nearby Loop Road.

Those visuals aside, the truly amazing thing about Thunder Hole is the sound. The thunder-like booms are created by water colliding against the air, forcing it out of the inlet. If nothing else, Thunder Hole should prove to you just how powerful Mother Nature can be. She’s also unpredictable, which is why it’s imperative that you keep your distance. The spray may seem harmless, but multiple people have lost their lives because they got too close.

Beehive Mountain is just 520 feet high and less than a mile’s hike to the top, but don’t let that fool you — it’s a strenuous climb and probably isn’t the best to try if you’re afraid of heights. Throughout Acadia’s hiking trails, you should expect to come across steel-rung ladders. Beehive, as well as Acadia’s most difficult hike, the Precipice Trail (see below), are known for this hikers’-assistance infrastructure, but even the less strenuous trails feature them.

All that said, if what you’re after is a quick, challenging hike, Beehive is it. There’s a pond near the top that you can swim in, and if you go during August, most of the trails pass wild blueberries you can eat along the way. Expect to begin on a heavily wooded trail that quickly climbs straight up a cliff. Just go slow on the ladders, don’t let the height mess with you, and you’ll be fine. 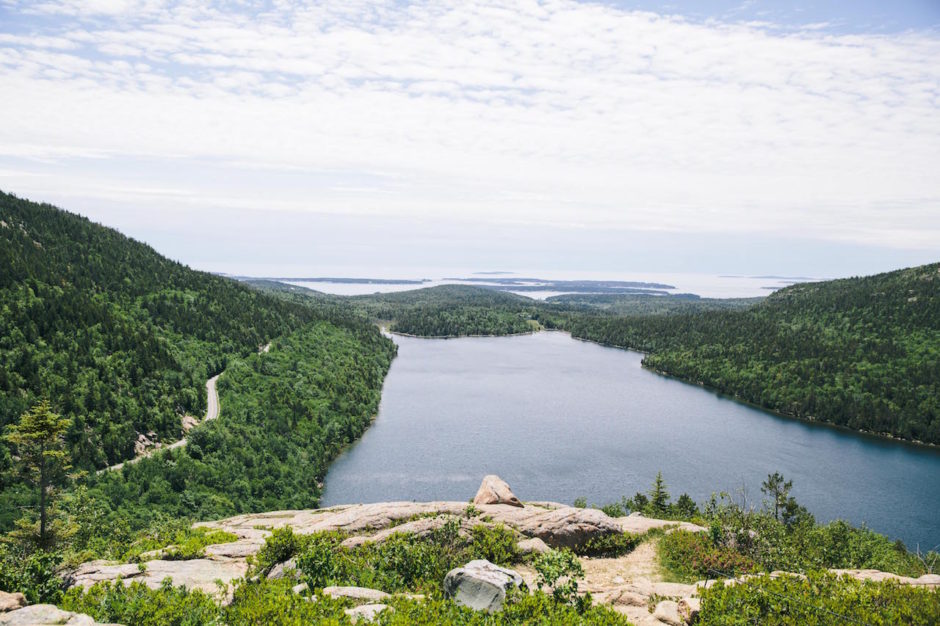 Jordan Pond was formed during the last period of glaciation by the Wisconsin Ice Sheet. It’s technically an oligotrophic tarn, meaning it contains a very small amount of nutrients but is still able to sustain life. There’s even a species of quillwort that’s believed to only exist in Jordan Pond.

You can’t swim here, but you can canoe, kayak, or walk around the pond. A path encircles its 3.6-mile shoreline, and other trails lead off from it. The shore path is pretty narrow, so it can get congested during the high season. Try not to go around lunchtime, when many people are out walking after a meal at the Jordan Pond House. The best time to circumnavigate the pond is in the late afternoon or early evening in the fall. 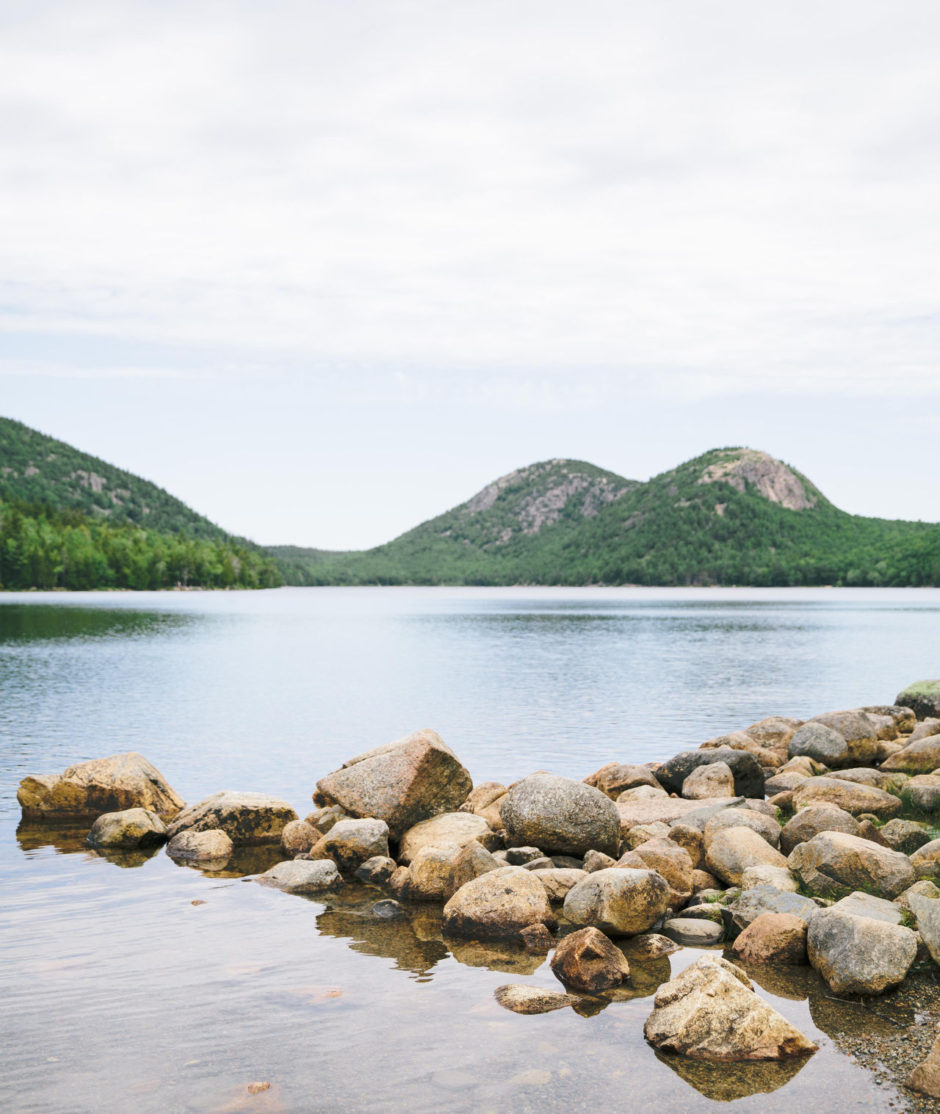 North and South Bubble Mountains stand at 872 feet and 766 feet, respectively. You don’t necessarily need to hike them to appreciate their beauty; there are good views of the twin humps from the Jordan Pond House as well as the aforementioned trail that loops around Jordan Pond. If you’re looking to hike in Acadia, though, the Bubbles are a great place to start.

Most people opt to climb the South — it’s a pretty easy hike, and Bubble Rock sits at the top (more on that below). North Bubble is a little less crowded. Its loop trail begins at Eagle Lake and brings you to the summit, then continues over to Conners Nubble, where you can look out over Eagle Lake before descending. You’ll have a much better chance of staying out of the crowds if you go the North Bubble route, and because the peak is just a little bit higher, the view tends to be a touch better.

Bubble Rock is basically a gigantic boulder that looks as if it’s teetering at the edge of South Bubble Mountain’s summit. Catch the view from the right angle and it’s totally surreal. The boulder is a glacier erratic — it’s a completely different type of rock than what’s typically found in the area. Geologists believe it originated more than 20 miles northeast from where it sits today and was carried by a glacier to the top of the 766-foot mountain.

When you see it, the obvious response is to try and push it off, but people have been doing that for hundreds of years — long before Acadia National Park even existed — and it still hasn’t budged. 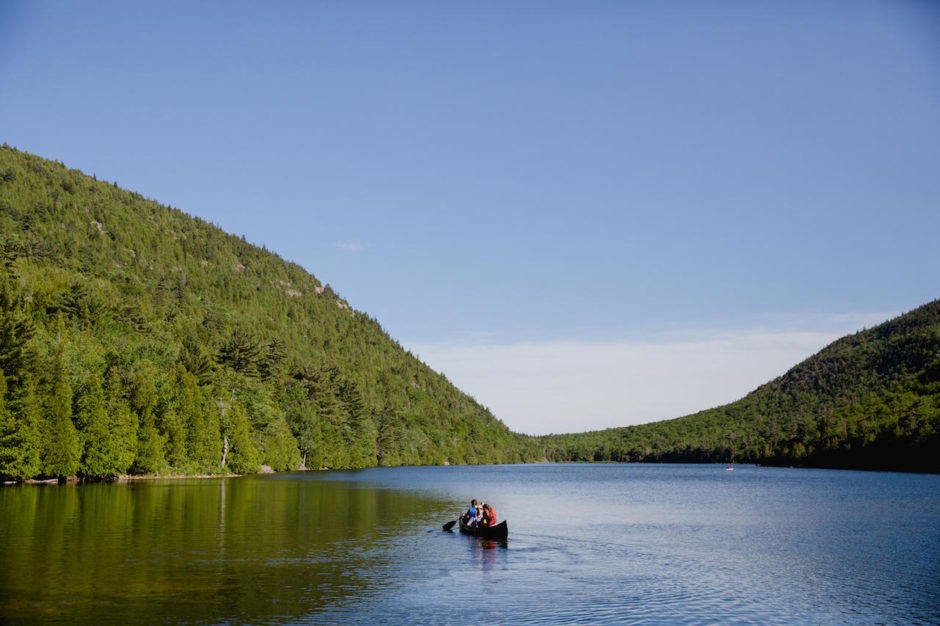 Bubble Pond is located near Jordan Pond but isn’t nearly as popular, making it a nice place to sit and reflect among the mountains, or to take your canoe out for a quiet paddle. You can get here via the Carriage Roads; go under the stone bridge and look for a path on the north side that will lead you to Bubble Brook.

The best time to walk the Compass Harbor Trail is actually at night. It’s a short distance to the ocean and you’ll spend most of it in the woods, so bring a headlamp. Walking here is a little eerie because a colony of owls often perches in the trees above, and they’ll let you know they’re watching you. When you make it out of the forest, the sky opens up and it’s one of the quietest and most serene places on the island to take in the stars while the waves crash on the rocks below.

If you go during the day (which is recommended for scouting purposes if you plan to do a night walk later), you’ll be able to see the old foundations of George B. Dorr’s estate; Dorr is considered the “Father of Acadia National Park.” Compass Harbor is also a safe place to get in the ocean, away from the crowds — which is extraordinary, considering it’s practically walking distance from downtown Bar Harbor. 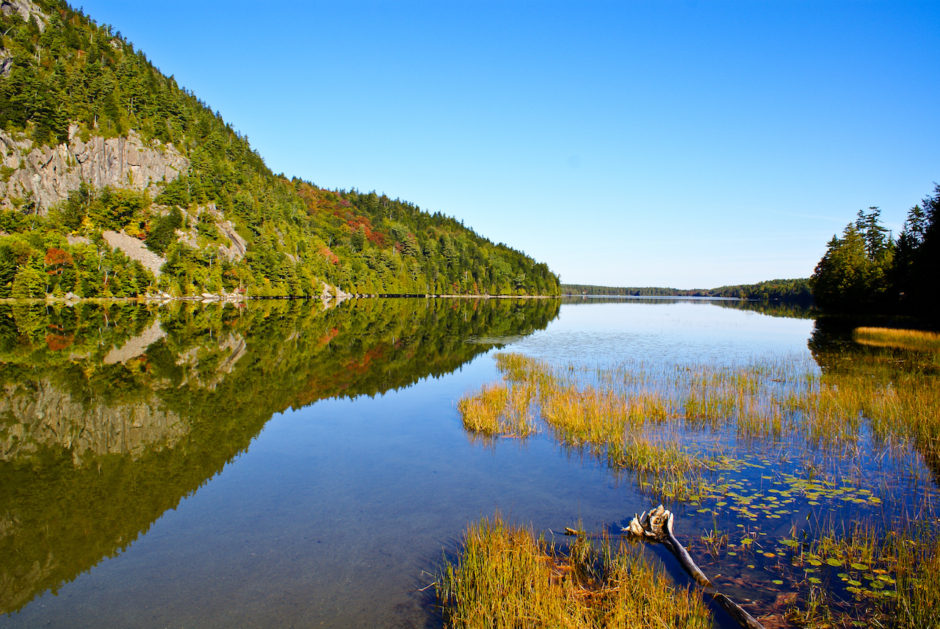 Many people head to the public beach on Echo Lake, off Route 102, because the freshwater is a lot warmer than swimming in the Atlantic at Sand Beach. However, there’s a lesser-known spot on Echo to get in the water: Ike’s Landing, a boat launch near Beach Cliff and the Echo Lake Dam. There should be plenty of room to park in the lot here, and if you head to the left of the boat launch, you’ll find a little path off to the side. Follow it for a ways and find a place to stop off and jump in the water. You might be the only one with the same idea.

Echo is a great place to bring a float and just lounge, as it’s often very calm and the water is always clear. If you want to get out and paddle, there are plenty of local outfitters who’ll rent you a kayak. Acadia SUP offers paddleboard yoga on Echo Lake two nights a week.

Precipice is located on the east face of Champlain Mountain and is held to be the most challenging trail in the park. It’s basically a 1,000-foot vertical climb to the summit; if you’ve conquered the Beehive, this is going to be a significant step up at almost twice its elevation.

The east face of the mountain is home to a large population of endangered peregrine falcons, and sometimes the park service will shut down the trail from late spring to mid-August to protect the birds. If you see that it’s open during your visit, go for it — you may not get another chance for a while.