WHEN I WAS 10, my mom and I went to Jamaica. We spent a few days with family in St. Anne, a few days at a villa, and a couple at a resort in Ocho Rios. I felt like I got to see many different sides of life on the island. One thing about that vacation I’ve never forgotten was the night we went to Glistening Waters.

Victor, a family friend from Trelawny, told us about a restaurant in Falmouth where after dinner the staff take you out on a boat to the Luminous Lagoon, where the water glows. I didn’t think it could be true. We ate at the restaurant and when the sun went down, we took off on a boat into the night. A few minutes later, you could see schools of fish glowing greenish-blue in the water. I put my hand in the water and that made it glow as well. Our guide suggested diving in and swimming around. I was a little bit nervous at first — swimming at night — but eventually I jumped in and everything around me was glowing. 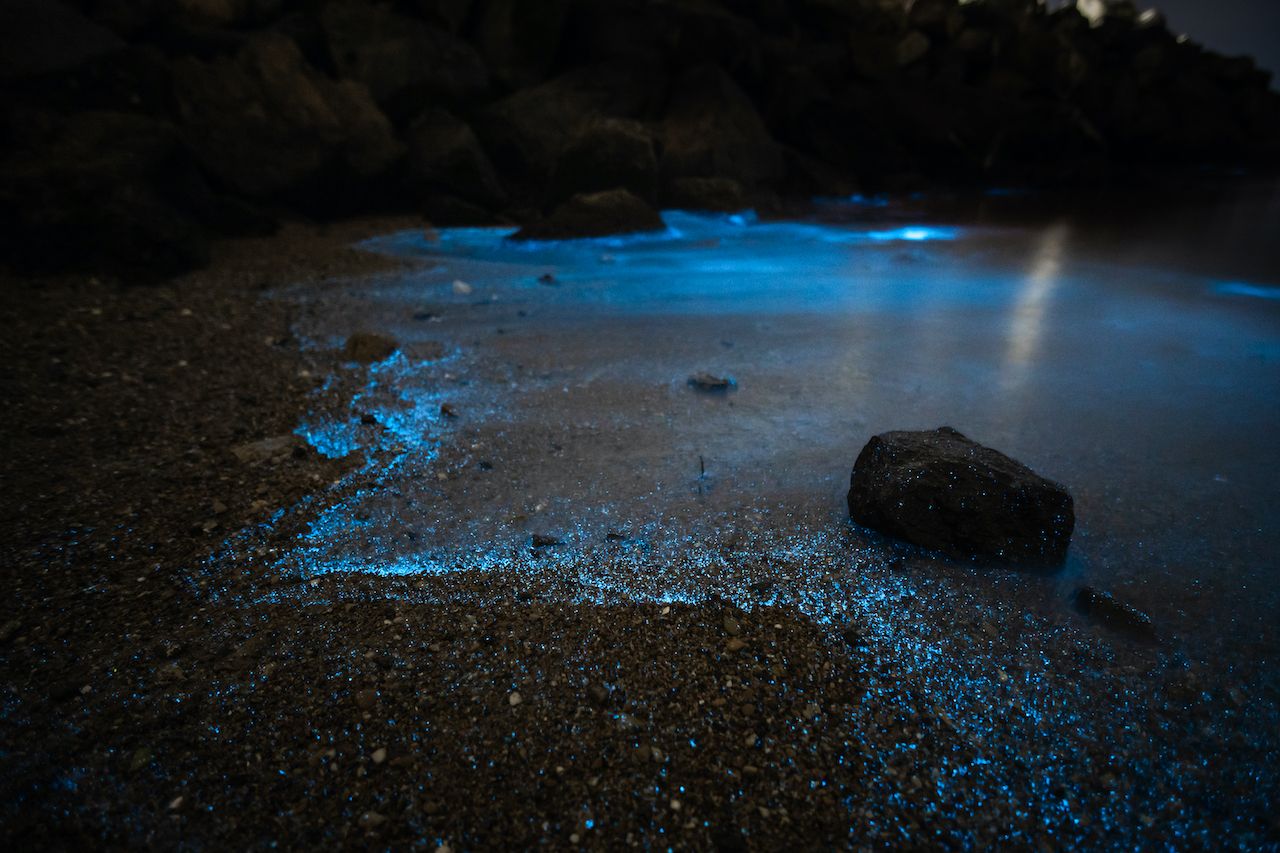 Our guide explained what created it: The brackish water in this bay — a mix of salt water from the Caribbean and fresh water from the Martha Brae River — combines with nutrients from red mangrove trees to make the area a perfect environment for bioluminescent dinoflagellates to thrive.

I just wanted to keep thinking it was magic.

Here are some more places you can experience the natural wonder of bioluminescence: 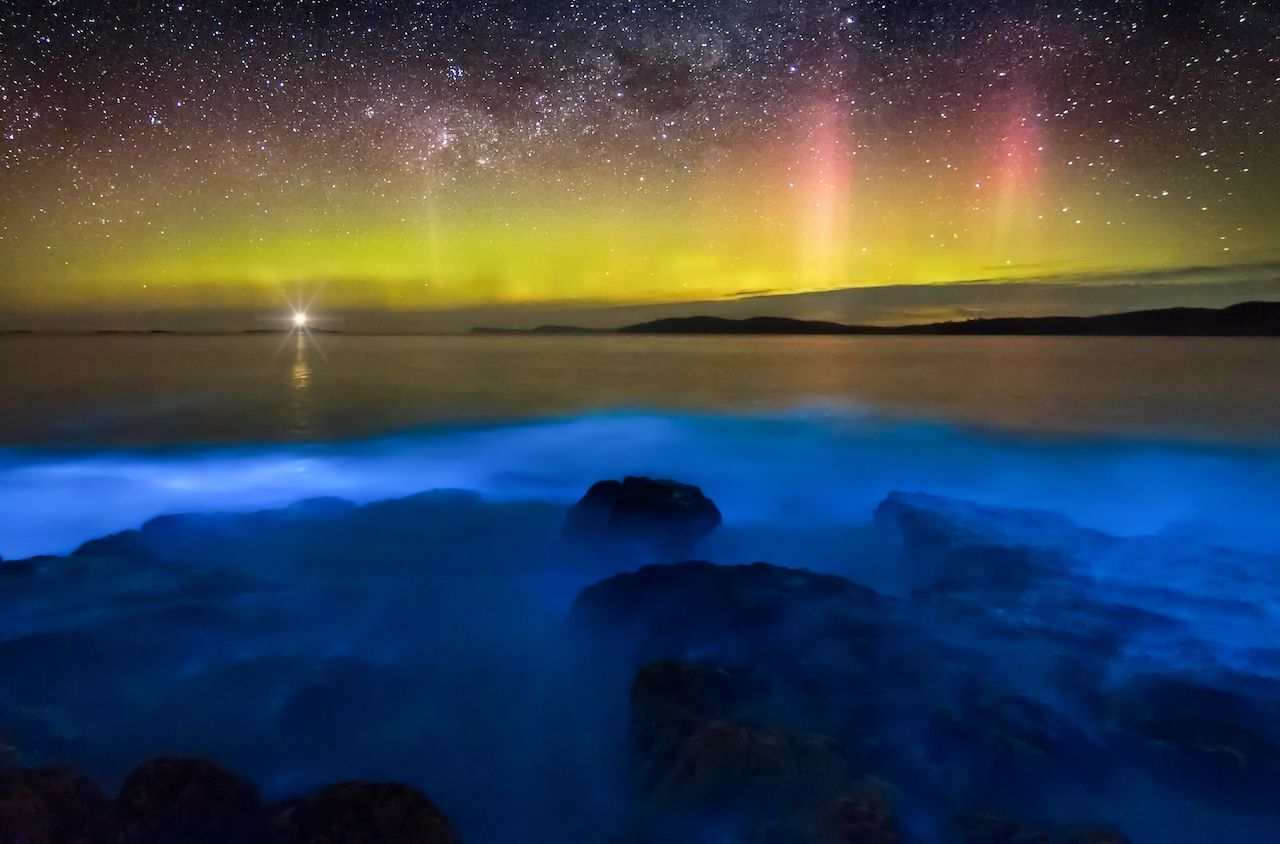 Bioluminescence can be created in a rare number of environments. In this instance, the glow is a natural phenomenon produced by algal blooms. The blooms carry and support millions of the bioluminescent dinoflagellates.

A series of alpine bush fires in 2006, followed by a flood in 2007, led to an outbreak of blue-green algae in lakes in Victoria. After a year or so, an algal bloom developed, meaning dinoflagellates could thrive. This type of bioluminescent environment is known as red tide. 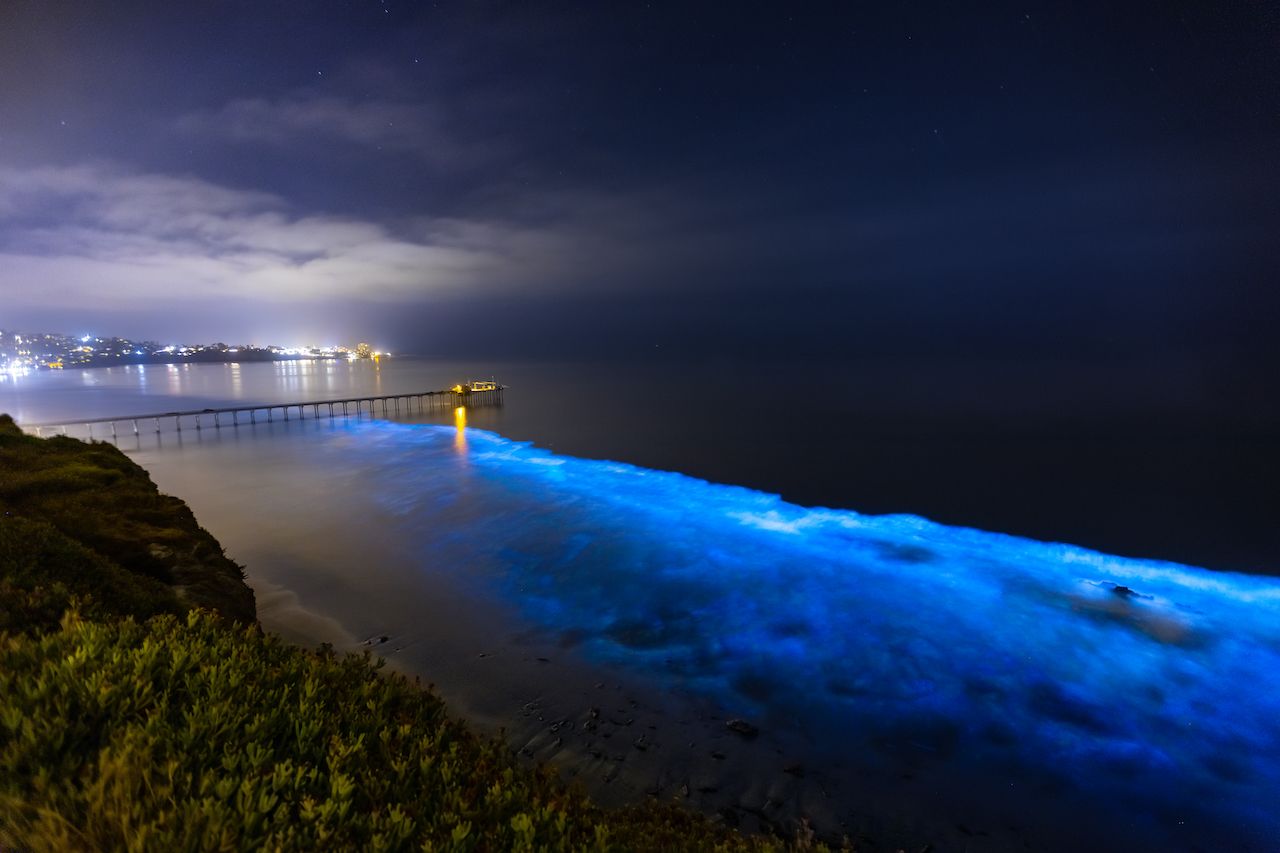 Red tides are so-called because the water gives off a rusty red hue in the daylight. They can occur anywhere in the world.

The algae aren’t poisonous, though they can contain high levels of ammonia. Researchers have linked an increase in ear and sinus infections to red tides, though it should be noted that algal blooms typically occur in conjunction with an increase in bacteria that feed on algae.

Some lakes have similar organisms, but they aren’t bioluminescent. Scientists are trying to understand why bioluminescence only evolved in the marine species.

Bioluminescence is used by dinoflagellates as a defense mechanism to escape predators. The chemical reaction that takes place in the organism is similar to the reaction in a glowstick. 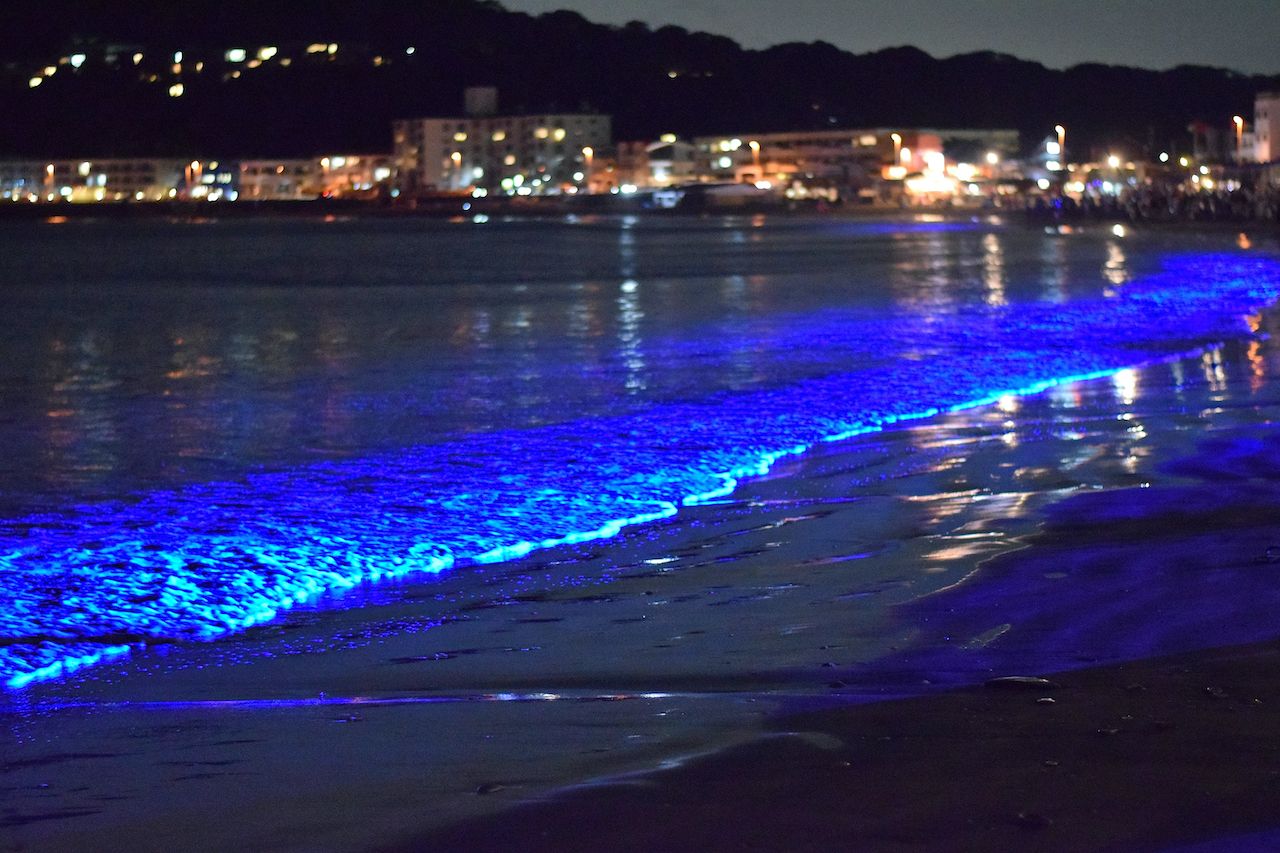 In the Caribbean, bioluminescence was recorded in the colonial period. In the 17th century, Spanish explorers tried to close off Mosquito Bay from the ocean’s water in order to prevent bioluminescence — they believed it was the work of the devil.

By reducing the flow of sea water into the bay, the Spanish increased the concentration of vitamin B12 (released by red mangrove trees) as well as the number of dinoflagellates. A typical gallon of water from Mosquito Bay contains 750,000 of the organisms. 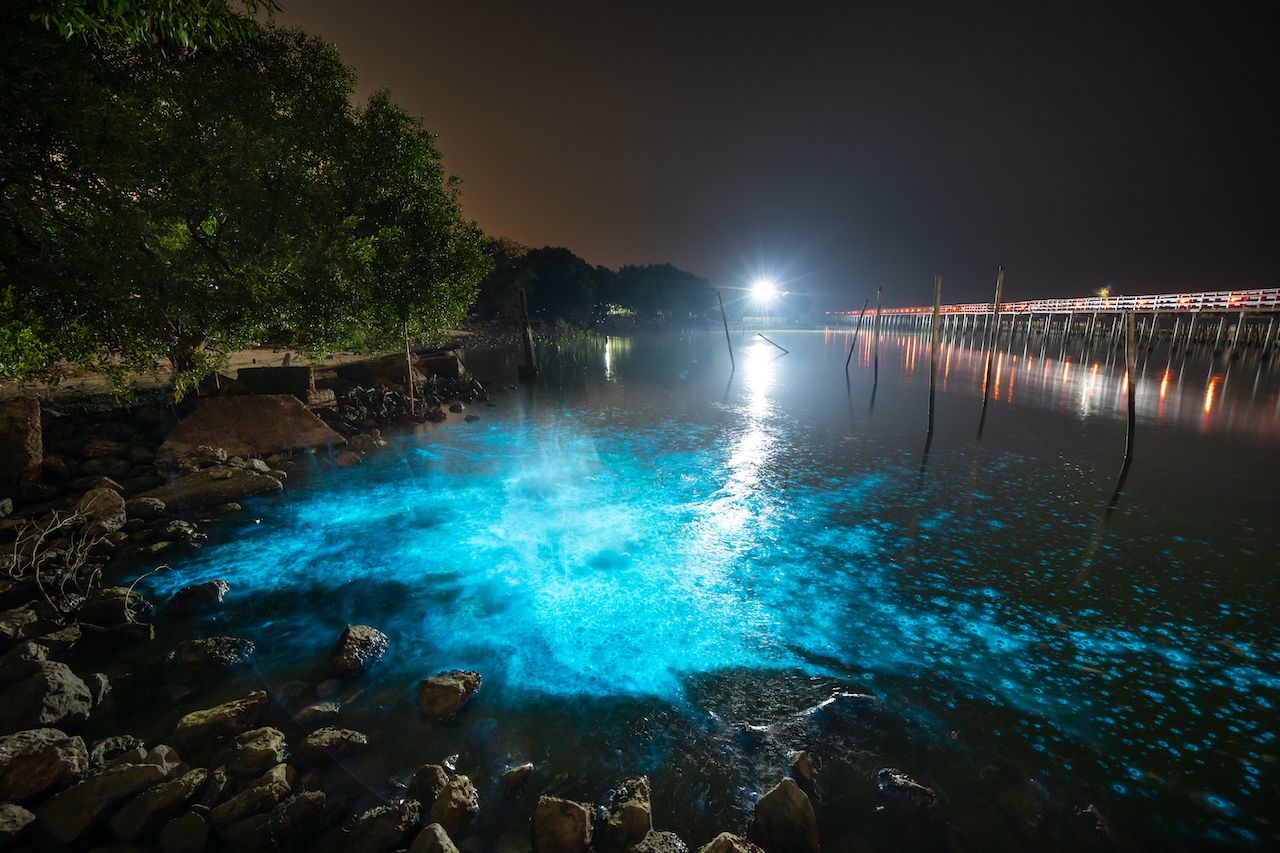 Bioluminescence can really only be seen in the darkness, so in Vietnam’s crowded Halong Bay you have to wait until the boats turn off their lights to experience the full effect.

The plankton light up whenever they are disturbed, though only for a moment. The greater the disturbance, the brighter the glow — boats typically create the most intense effects.

Numerous species of phytoplankton are known to bioluminesce, and the glow can be seen in oceans worldwide at all times of year.

Not exactly bioluminescent plankton — this is a squid that emits light along its entire body. They normally live at depths of 1,200 feet, but occasionally the tide pushes them up to the surface, where they’re fished and eaten as a delicacy.

The species of dinoflagellate found in Belgium is commonly known as the sea sparkle. Nutrient-rich water and high concentrations of their plankton food source allow them to thrive here.

Norfolk is one of the better-known coasts for witnessing bioluminescence; however, the glow can also appear throughout Britain in shallow and warm salt water, typically after prolonged sunlight. 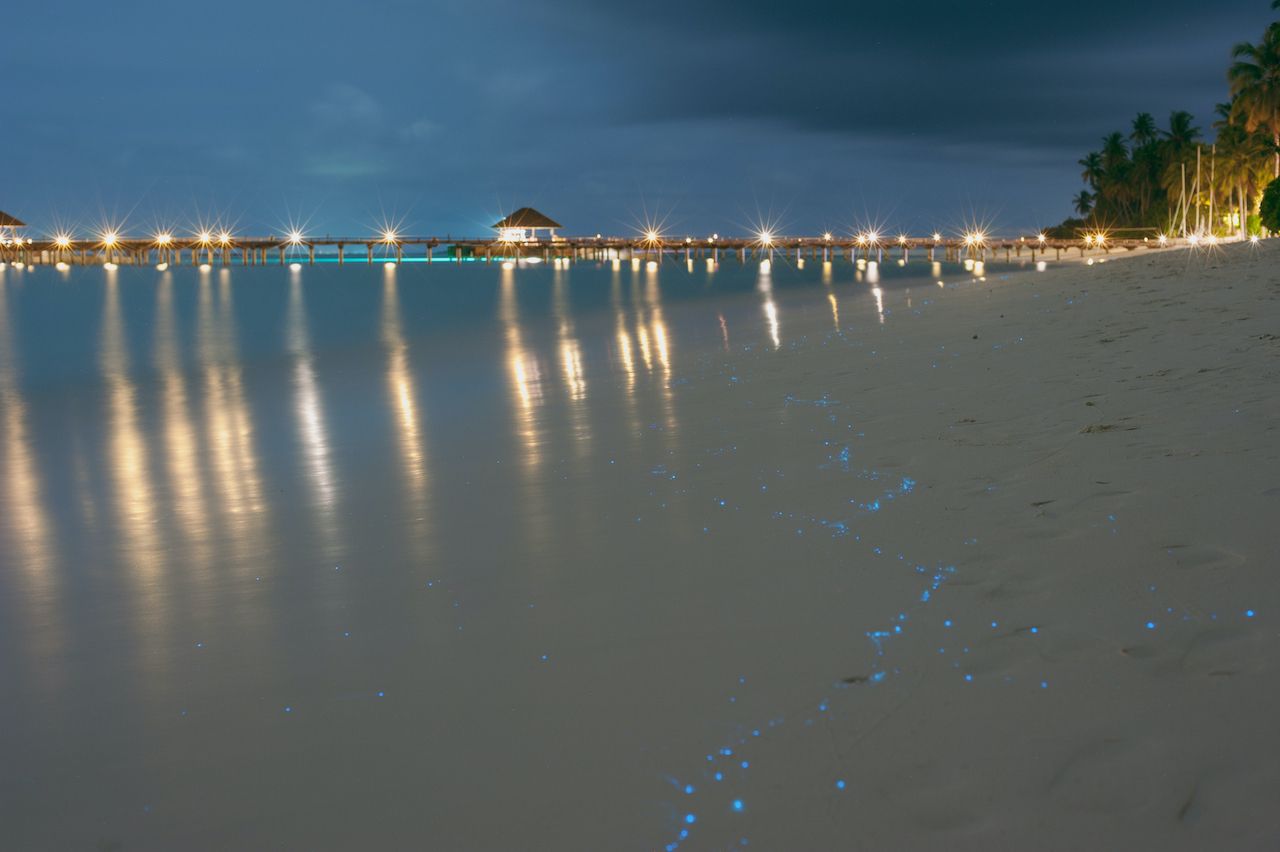 Bioluminescent particles in a beach in the Maldives. Photo: ViDl Studio/Shutterstock

Even though dinoflagellates are single-celled organisms, some of them are large enough to be seen with the naked eye. They wash up on shores and it looks like glitter. Walk in them and your footsteps will glow.

The spiritual awakening we feel in water could save the planet
Tagged
Trip Planning
What did you think of this story?
Meh
Good
Awesome