The original wanderers, the local Kiwis, are raised on adrenaline and independence — something that shines through all the epic outdoor opportunities in New Zealand. Friendly, easy-going, and always keen to get out and do something unforgettable, the people you’ll meet here will make you feel at home right away, and they’re usually the first ones to encourage you to take a leap of faith and fling yourself off something high. That’s how it goes in a country where you can skydive before breakfast, bungy jump after lunch, and climb a mountain in the afternoon.

Here are 20 awesome adventures, and 20 clear reasons why New Zealand is the ultimate adventure destination. 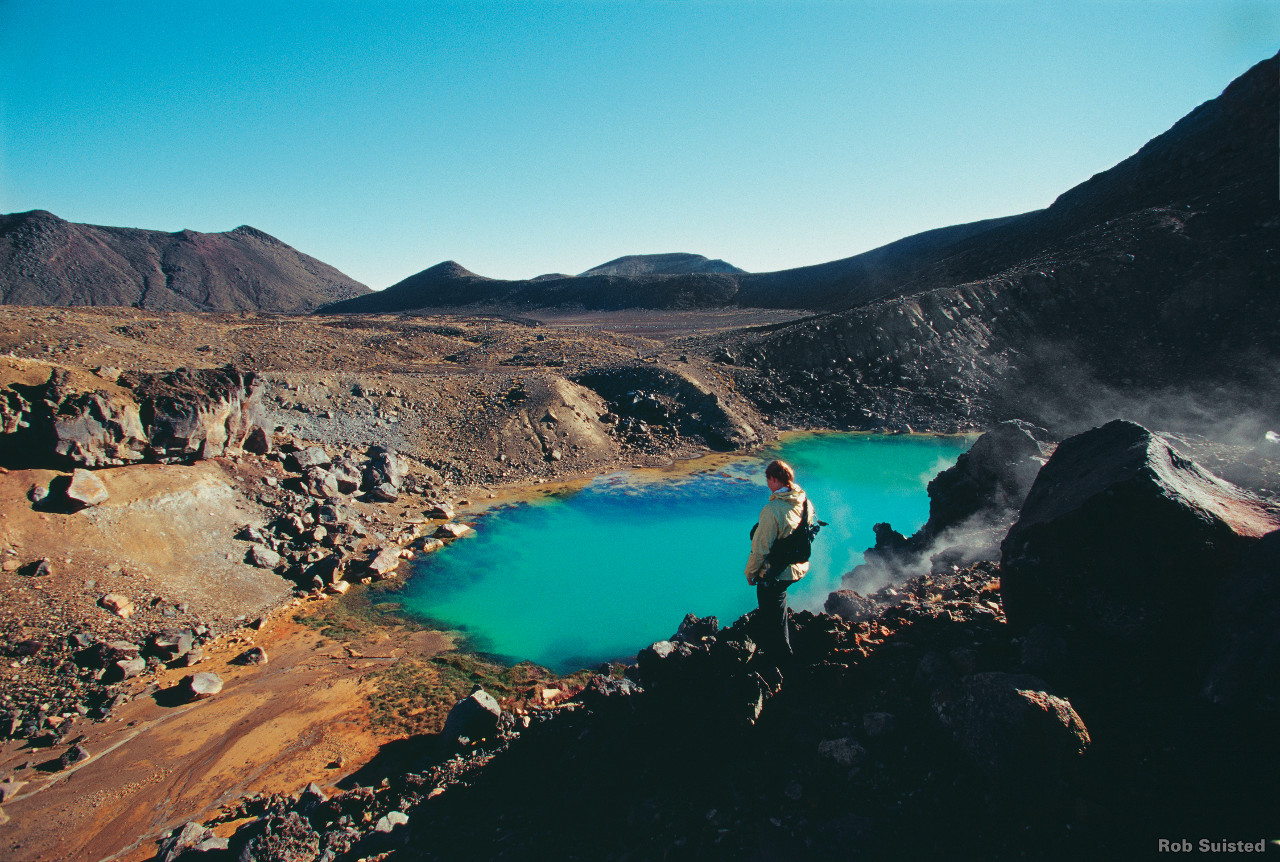 If you only do one hike in New Zealand, let it be this one. Considered one of the best day hikes in the world, the Tongariro Alpine Crossing stretches across 12 miles of incredibly scenic volcanic terrain, most notably a series of green crater lakes simmering with steam. Tongariro is right in the middle of the North Island and is one of the most easily accessible hikes in the country. Plus the transport to and from runs like clockwork.

2. Swimming with dolphins in Kaikoura 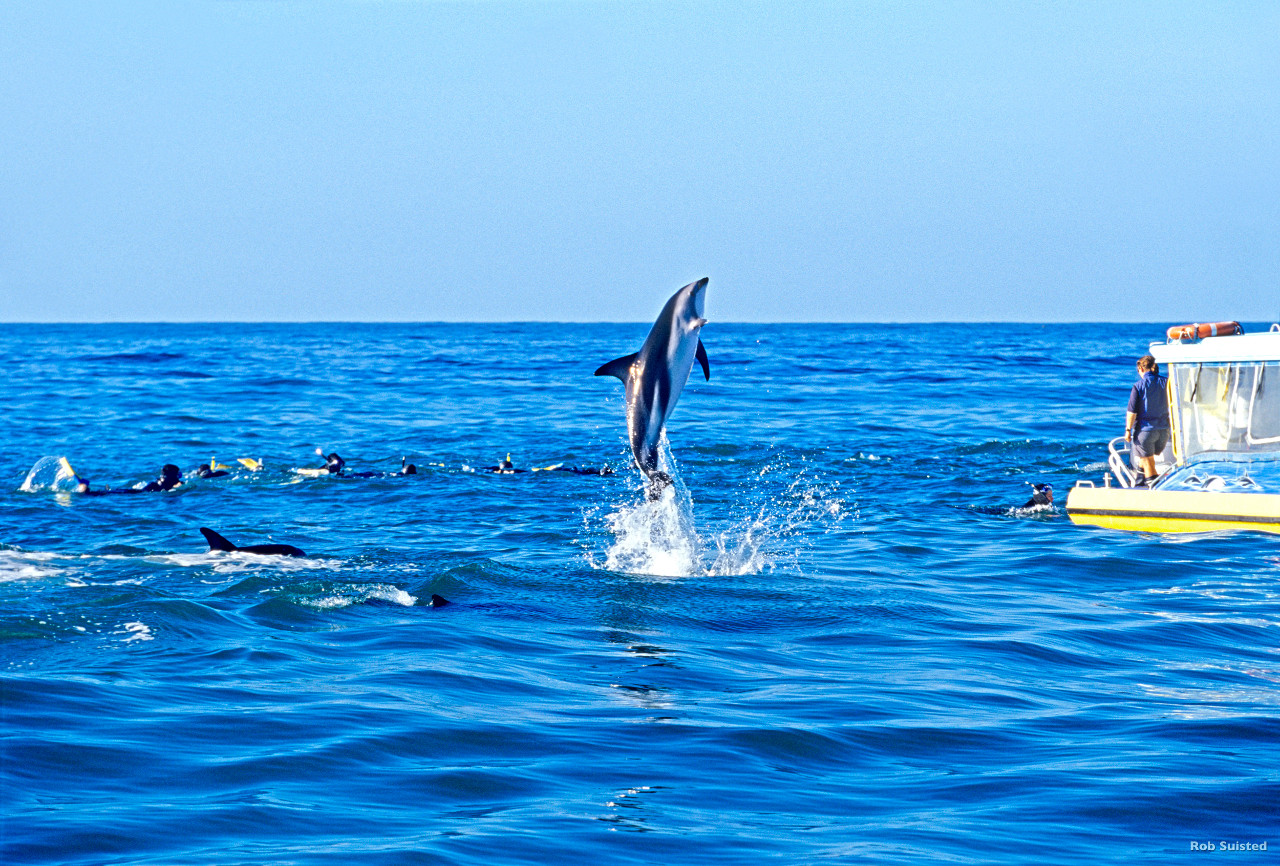 In Kaikoura, one of many places in New Zealand where mountains run right into the sea, you can jump off a boat into a pod of wild dolphins with just a camera, a wetsuit, and a snorkel. You’ll also see whales, splash around with seals, and catch your own crayfish for dinner.

Tucked away at the bottom of the South Island, Milford Sound is one of the last true wildernesses in New Zealand. A palatial fiord lined with vertical cliffs, glaciers peeking through in the distance, it’s one of those rare spots that looks incredible rain or shine. Depending on recent rain levels, those cliffs may be covered with hundreds of waterfalls. Get on the water and explore by boat or, better yet, a kayak.

4. Digging your own hot tub at Hot Water Beach 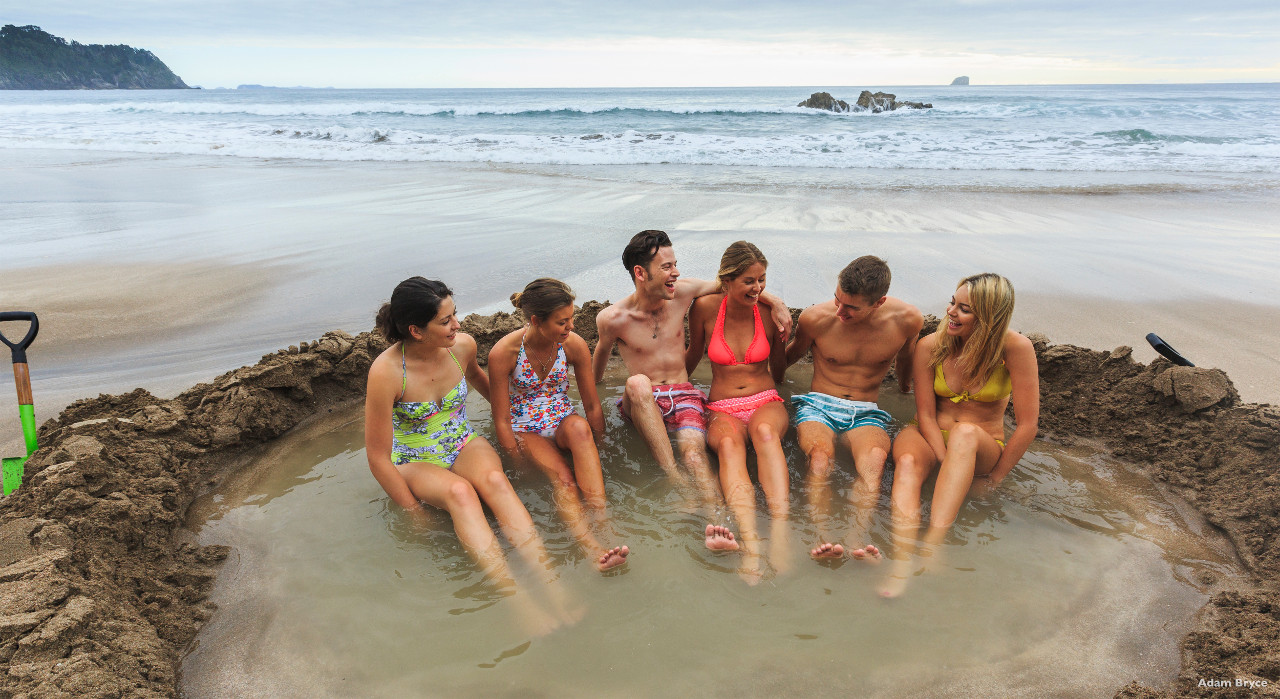 At low tide on Hot Water Beach in the Coromandel, you can dig your own giant hole in the sand and watch it fill with hot water from a subterranean spring…voila, your own free jacuzzi. It’s such a rad little beach — usually there are other people milling about enjoying the sand and springs, making it a fun and social spot.

5. Throwing yourself off the world’s first commercial bungy jump in Queenstown

I’m pretty sure New Zealand’s unofficial national sport is jumping off tall things. Bungy jumping was invented here, and on the road to Queenstown you’ll find the Kawarau Bridge, site of the world’s first commercial bungy jump. If you’re going to hop on the adrenaline-sports bandwagon in New Zealand, do it here. You can even opt for extra slack and get dunked in the river below. 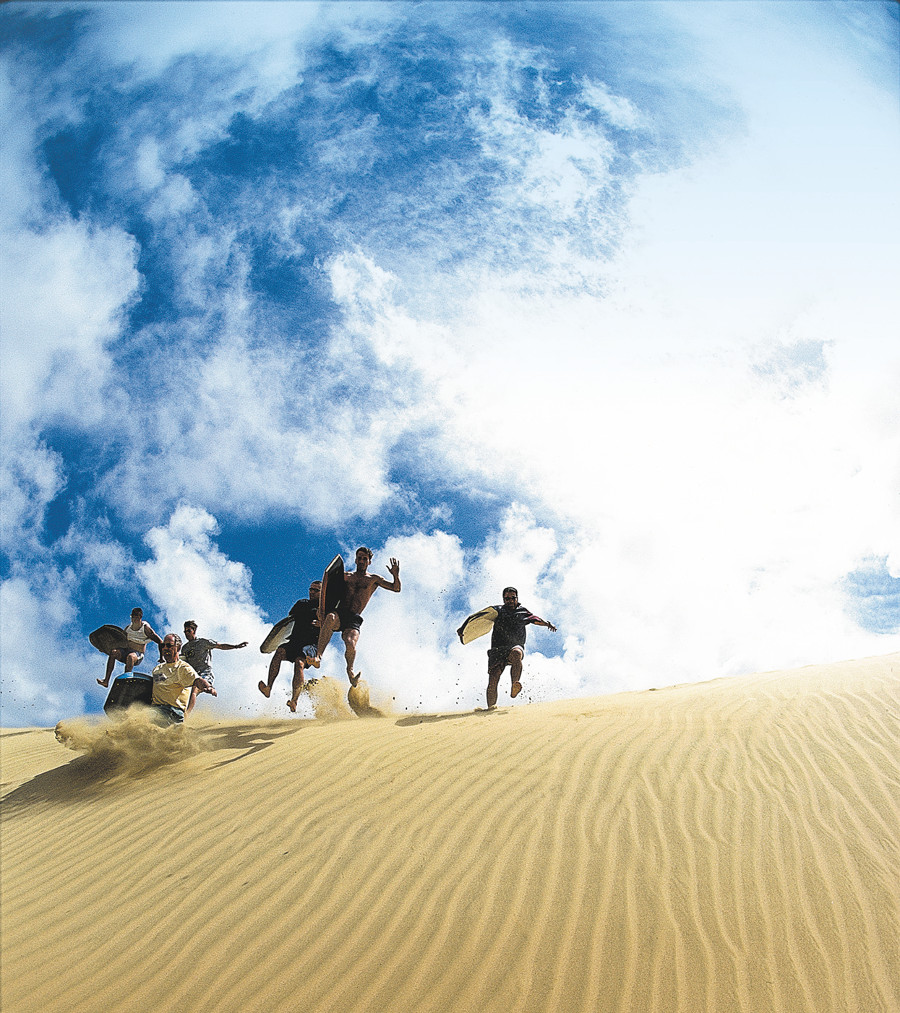 I always send people to Ninety Mile Beach if I know they’re headed up north of Auckland. At this stretch of Northland coast, you can zoom down the massive Te Paki Sand Dunes and then go for a swim and a surf.

The Abel Tasman, located across the Tasman Bay from Nelson, is one of the best stretches of coast in New Zealand — clear blue bays, sandy white beaches, big rock formations, old-growth forest. There are so many great swimming spots, but the area’s best explored by kayak or by hiking the track. It has some of the sunniest, warmest weather in the country, so if you’re looking for quality beach and bathing-suit time, head here.

On the wild west coast of the South Island, you can fly in by helicopter and hike on Fox Glacier, which drops down from Mount Cook and the Southern Alps. One of the highlights of the trip is a chance to walk through sculpted ice caves that form near the glacier’s surface. 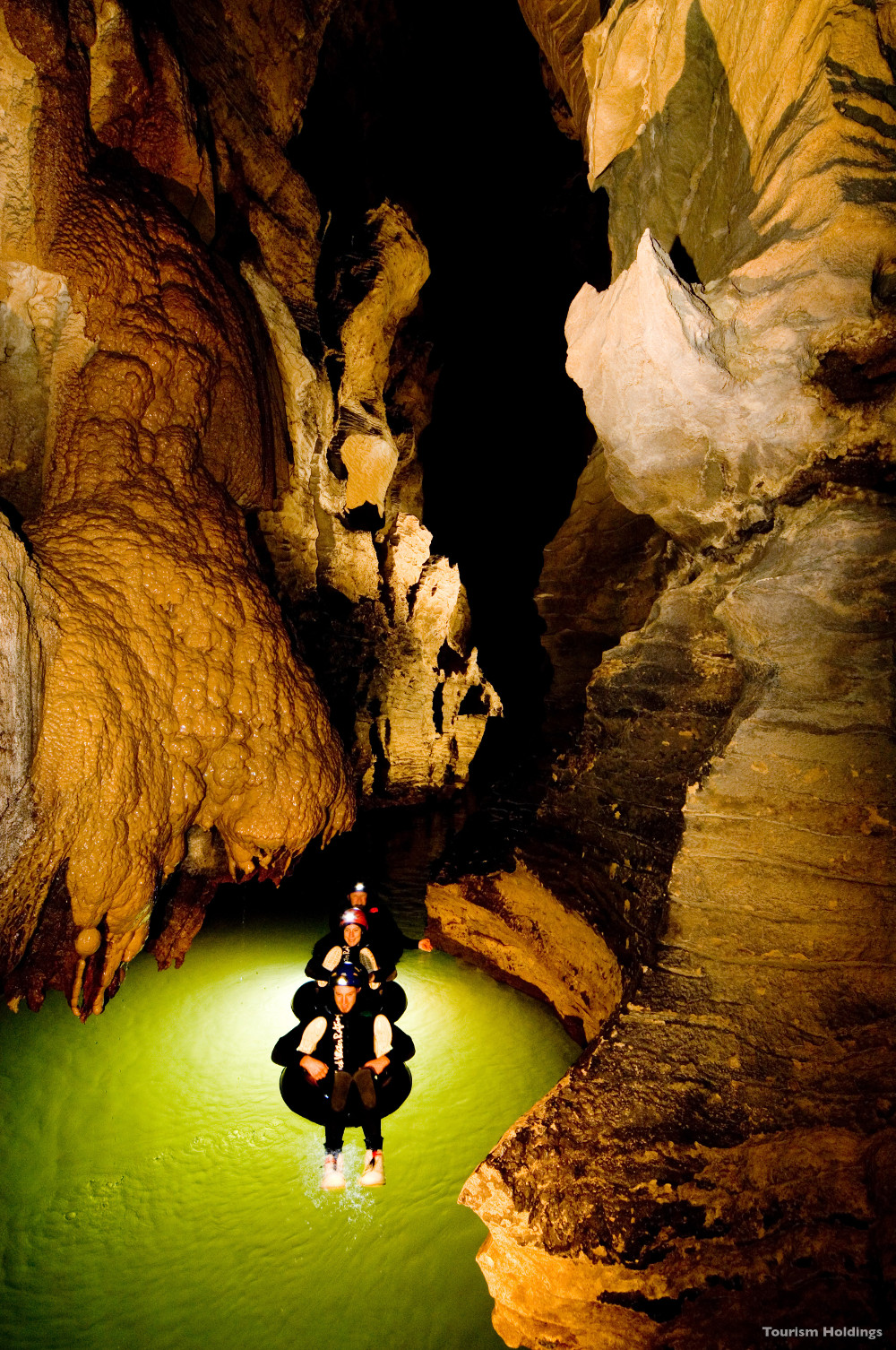 And now for something completely different. The caves at Waitomo are beautiful in their own right, but covering the walls and ceiling are hundreds of glow worms. They light your way like tiny blue stars, and you can experience this labyrinth of subterranean trippiness however you want: on foot, by boat, black-water rafting, or as an introduction to caving.

10. Hitting the slopes at Treble Cone 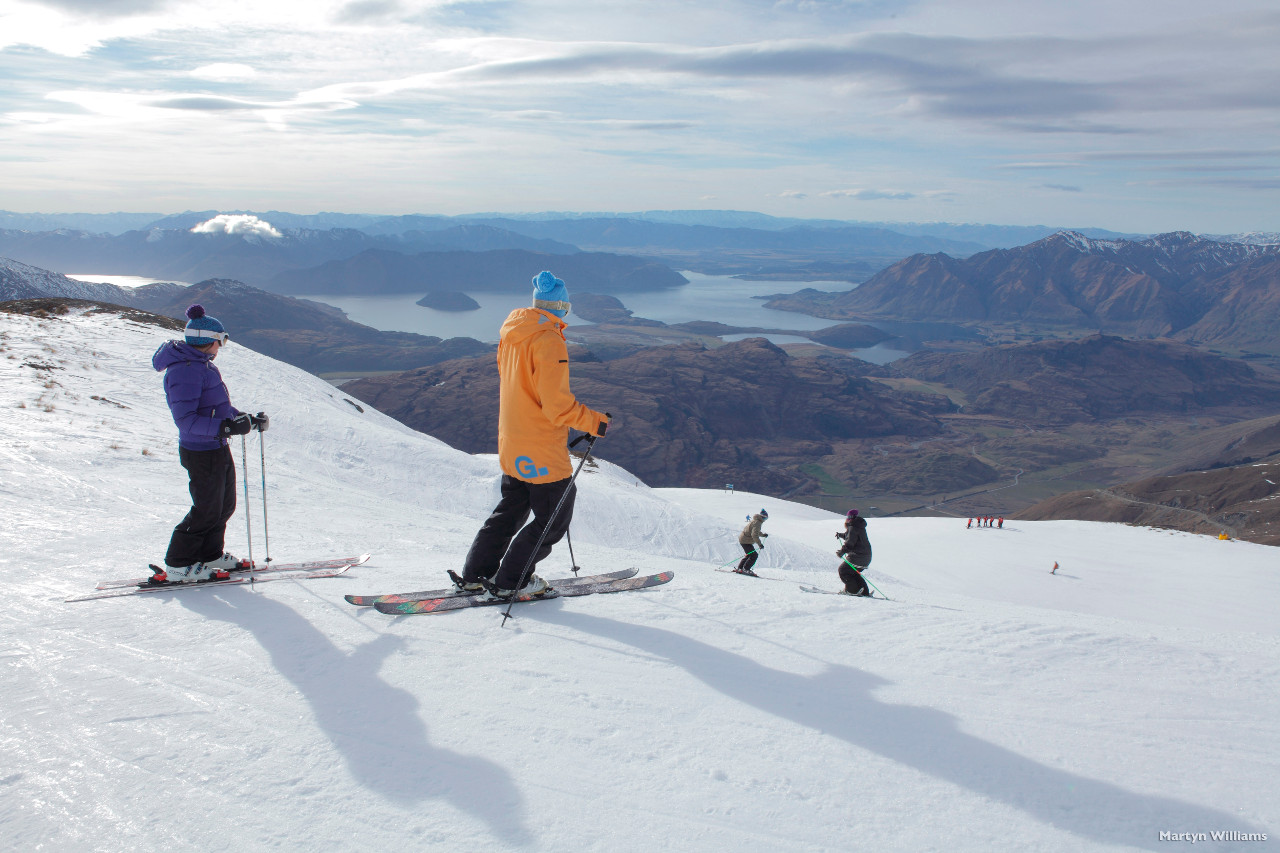 New Zealand’s premier ski field is located in Wanaka in the South Island, overlooking the Matukituki River, Wanaka Lake and its islands, and the peaks of Mt. Aspiring National Park. There are no trees to impede the stellar views all the way to the valley floor and water below. Treble Cone has some of the most expansive terrain in the Southern Hemisphere, and it’s a legendary local hangout. If you’re lucky, you’ll get to see some keas — the world’s only alpine parrot.

11. Joining a Maori experience in Rotorua 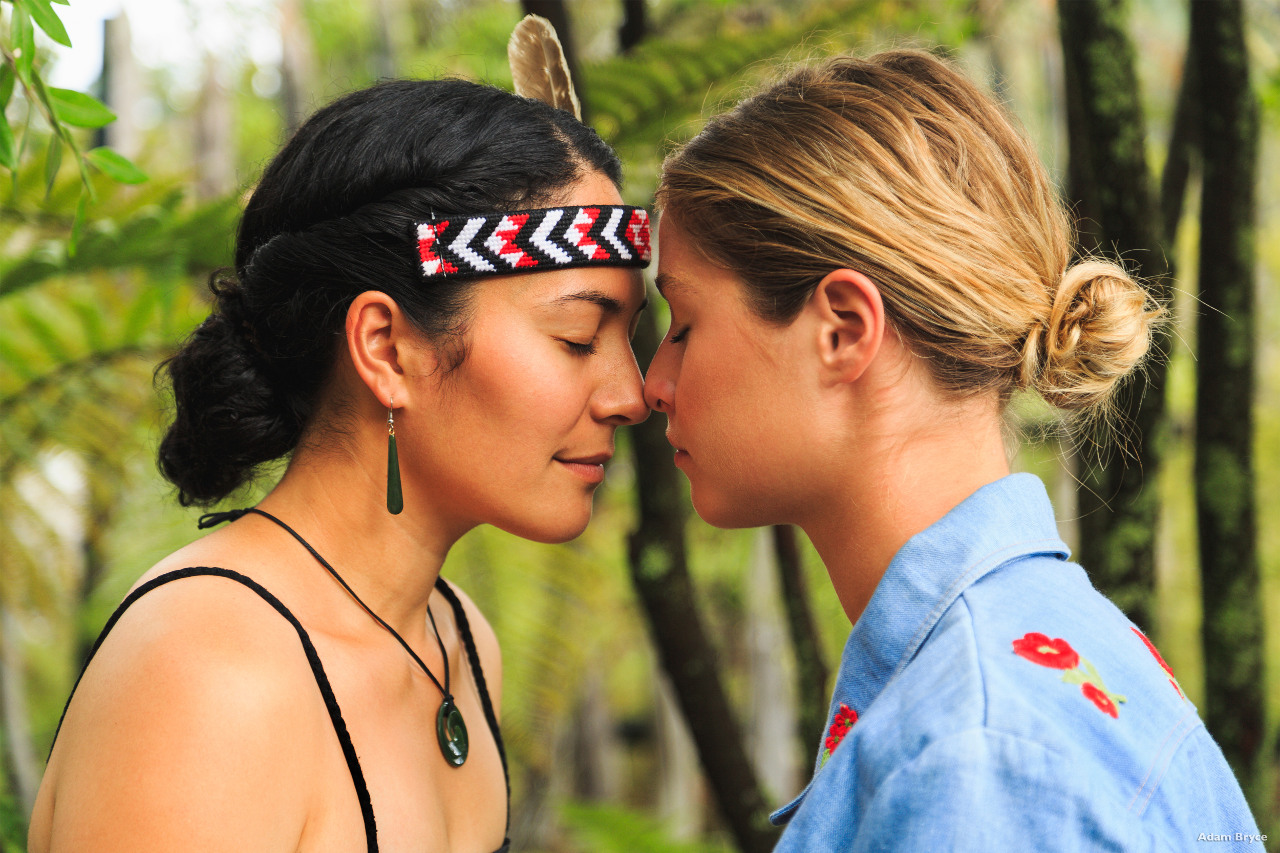 The people of New Zealand are some of the friendliest and most welcoming in the world. Once you get here, you’re in safe hands. Don’t miss out on a chance to experience the indigenous Maori culture firsthand. Around the Te Whakarewarewa Valley in Rotorua, you can visit Te Puia, a geothermal park that’s also the home of the New Zealand Maori Arts and Crafts Insitute. Here you may get invited into a show at the Marae — a very special experience. 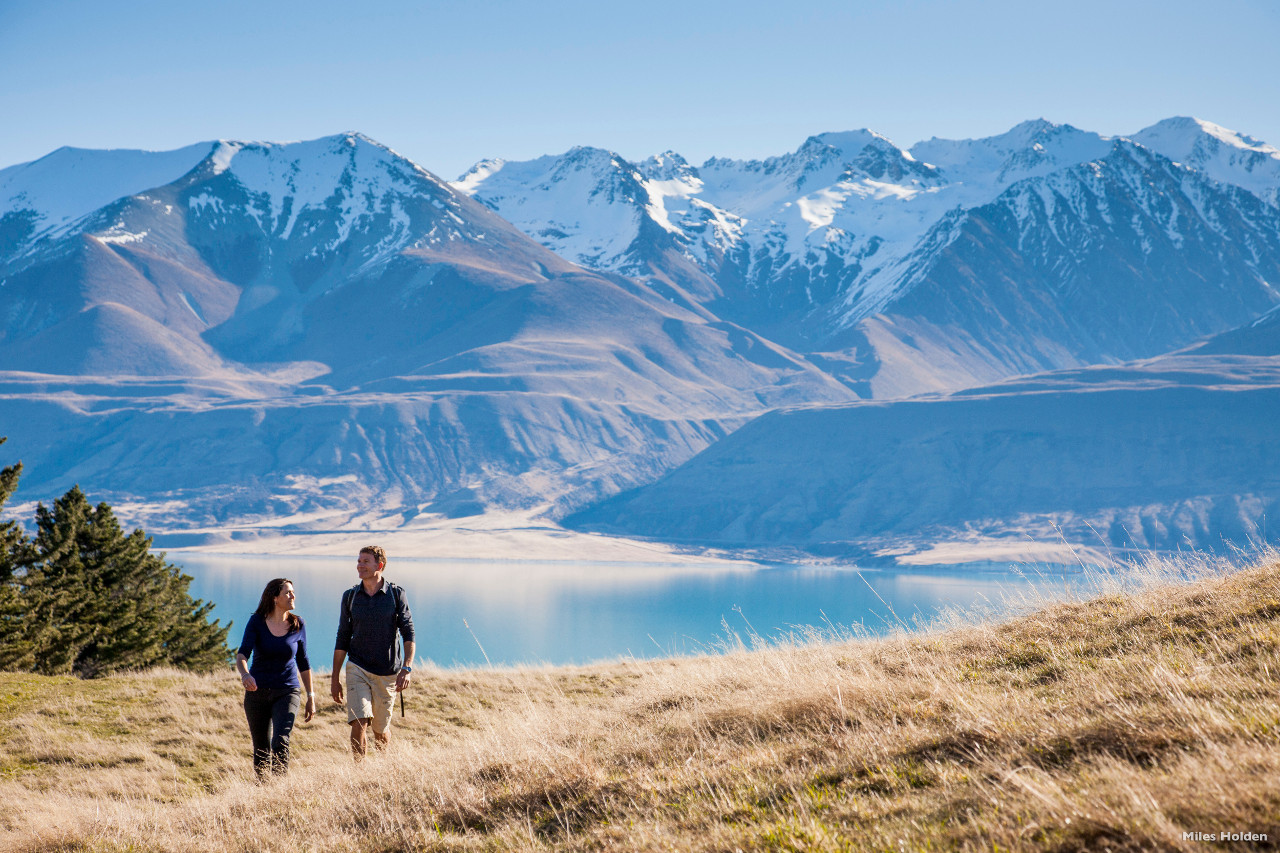 There are series of red alpine huts in the mountains and forests of New Zealand. One of the most picturesque — and accessible — is Mueller Hut in Aoraki / Mount Cook National Park. It’s only a few hours’ hike from the town below, and the route looks out over both Mount Cook — New Zealand’s highest — and Hooker Glacier before crossing over a saddle to the hut. From here you’ll get tremendous views of all the surrounding mountains.

13. Learning to surf in the Catlins

The far south of the South Island is one of New Zealand’s best-kept secrets. Rugged coastline meets wild seas with beaches home to pods of small endangered dolphins and cliffs frequented by penguins. There are plenty of great bays and surf spots — one of my favorites is Curio Bay. It’s a small bay dotted with old holiday cabins and killer campsites, a great beach escape in a country full of them.

14. Skydiving over the Southern Alps in Queenstown or Wanaka

If you’re going to skydive, do it over some epic landscapes. The mountains around Queenstown and Wanaka make for a pretty nice backdrop as you plummet to earth. There are different heights and other options you can choose from, but it doesn’t get any better than hurling yourself out of a plane over snowcapped mountains and lakes. 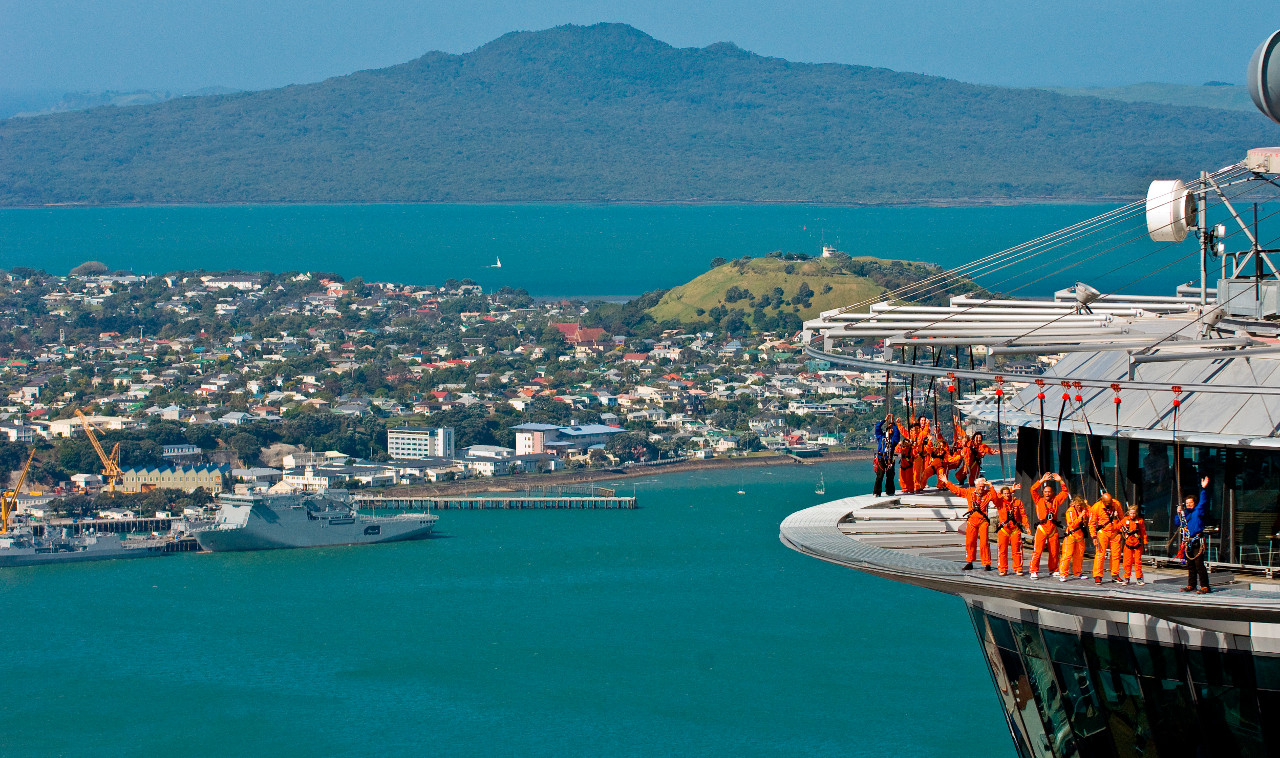 There’s adventure to be had right in the heart of the city as well. At Auckland’s Sky Tower, New Zealand’s tallest building, you can walk around the outside of the observation area on a narrow ledge — 192 meters above the ground — or throw yourself off the top…attached to ropes, of course. 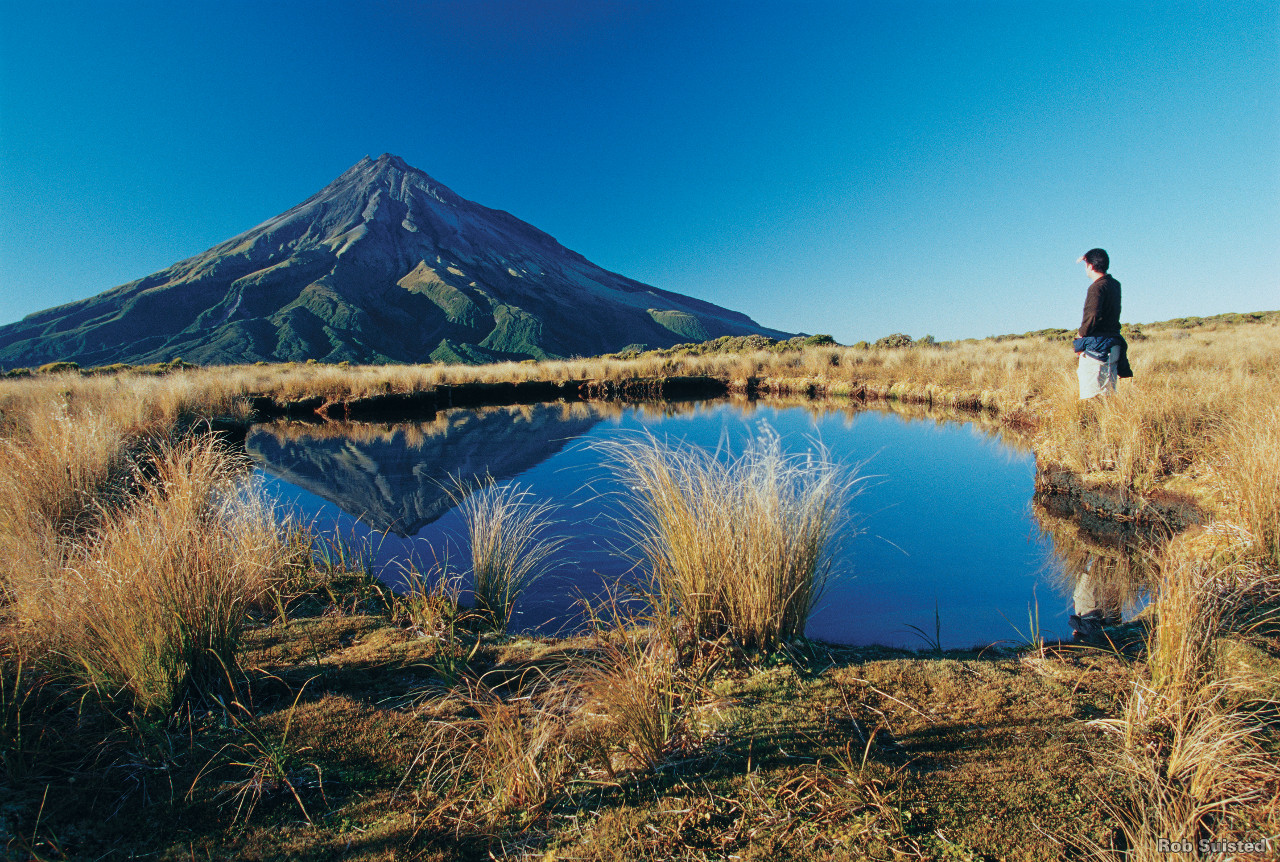 Few mountains strike as iconic a profile as the conical volcano of Mount Taranaki. Yes, this is the North Island and far from the peaks of the Southern Alps, but don’t be fooled — Taranaki is absolutely massive, and without alpine experience it can only really be hiked on perfect-weather days in summer. But the view from the top is totally worth the intense climb. On a clear day you can see all the way to the Tongariro Crossing. 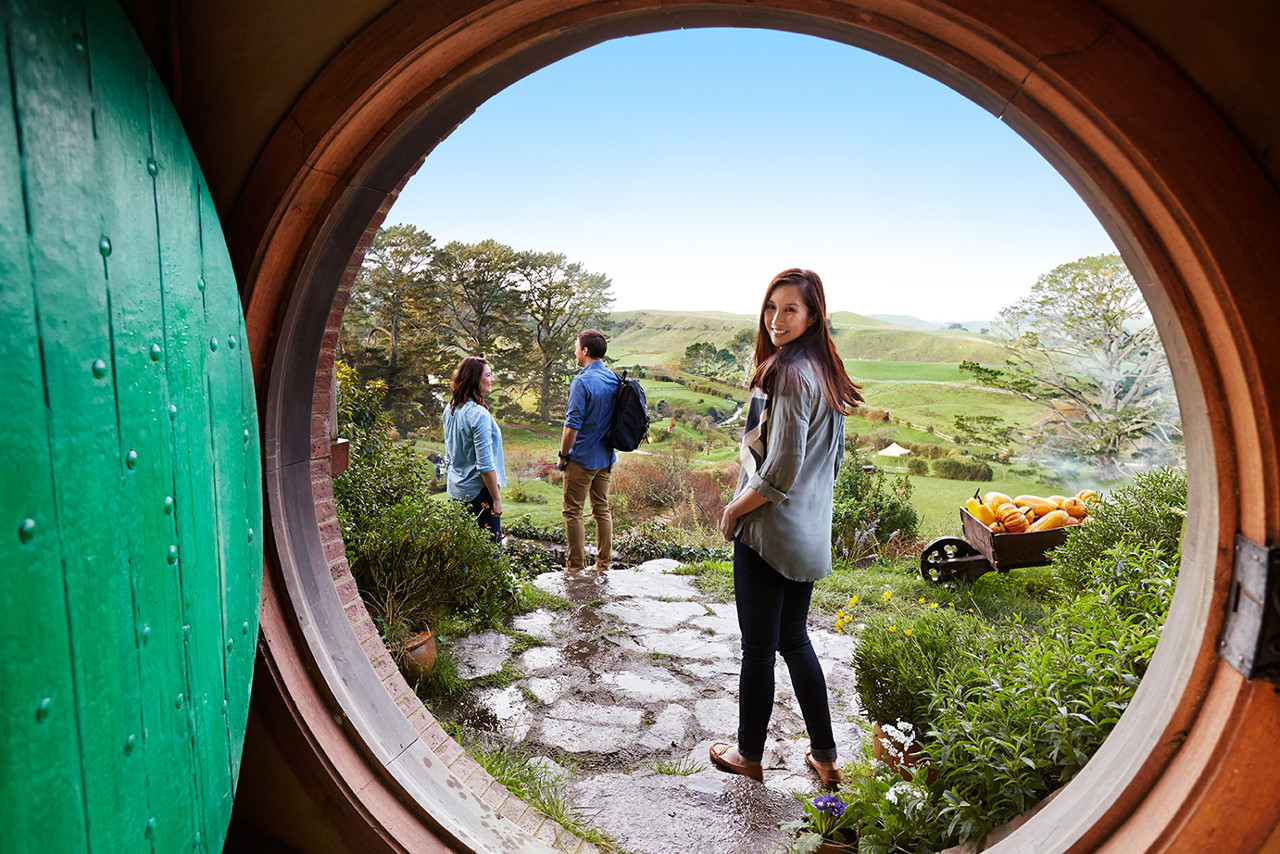 Sitting amid rolling farmland on the North Island is Hobbiton, the set where parts of The Lord of the Rings and The Hobbit were filmed, and it’s one of the only ones where things were left intact for tourists to visit and enjoy. Whether you’re hopping fences and reenacting scenes from the movie or just wandering around wishing you could move into one of the hobbit holes, it’s a very cool place.

18. Diving around the Poor Knights Islands

The Poor Knights Islands lie off the east coast of Northland, way up at the top of the country north of Whangarei, and are rated one of the best dive sites in the world. Wrecks and reefs are easily accessible here, you can take a dive class, or even if you just want to snorkel — this is one of the best spots for getting in the water in New Zealand.

19. Rafting a 20ft waterfall in Rotorua 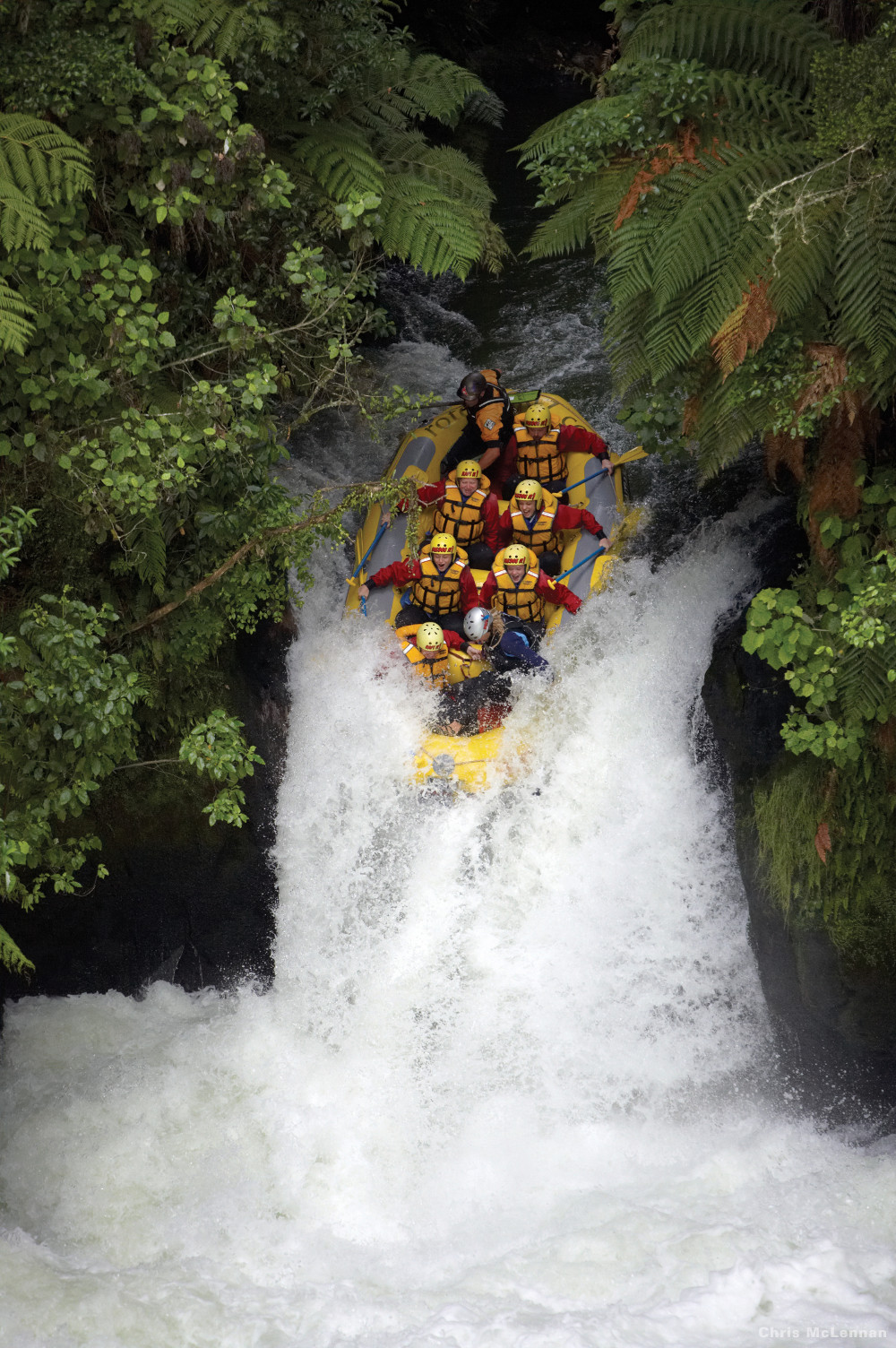 Near Rotorua, you can raft the world’s highest commercially run waterfall. The 20ft Tutea Falls is a sick little chute on the Kaituna River that is definitely not for those with a fear of falling out of their watercraft. 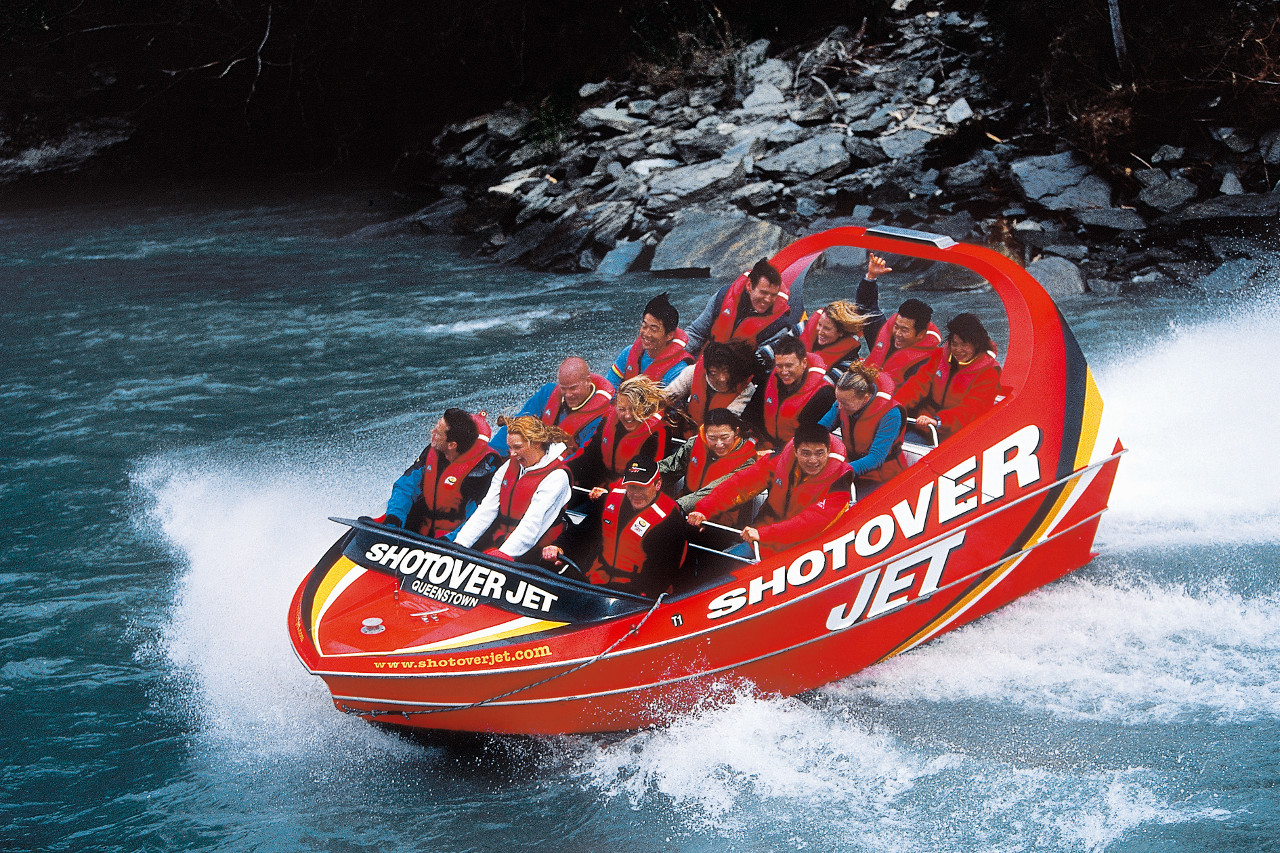 It sounds a little crazy: strapping a jet engine to the back of a boat and blasting up and down super shallow glacial rivers. But that’s what goes on in the narrow Shotover Canyon just outside of Queenstown. If you prefer to get a bit more intimate with your whitewater, the canyon is also raftable.