1. There are more non-Mormons than Mormons.

Sorry to crush your vision of what Salt Lake City is ‘supposed’ to be like, but the Mormon majority is a thing of the past in the city, with the rest of the county not far behind. The non-Mormon population has been on a steady rise for the last decade, and despite the fact that this is the headquarters of the religion, not everyone you’ll meet here will be Mormon.

Contrary to popular belief, you can buy a drink in Utah. Walk into any of Salt Lake City’s 118 bars and you’ll see that this city’s fully equipped to serve you a drink — the good stuff too, not just that 3.2 beer you’ve heard horror stories about.

3. It’s one of the most accessible ski destinations in the world.

I can’t see how the SLC airport could be any more convenient for a quick ski or snowboard trip, short of it being located in the actual parking lot of one of the 14 nearby resorts.

There are direct flights into SLC from 92 US cities, which means flying is by far the easiest and quickest route from cozy-in-your-bed one morning to slashing-up-some-fluffy-Utah-pow that same afternoon.

4. Four of the closest mountains get the most snow in the state…

Alta, just 25 miles away, gets 560″ of snow dumped on it annually, the highest snowfall in the state. Then there’s Snowbird, Solitude, and Brighton. They’re all within a 30- to 45-minute drive of the city, and at 500″ of annual snowfall each, they’re all next in line for the most snow in Utah.

5. …and there are PLENTY more mountains to choose from. 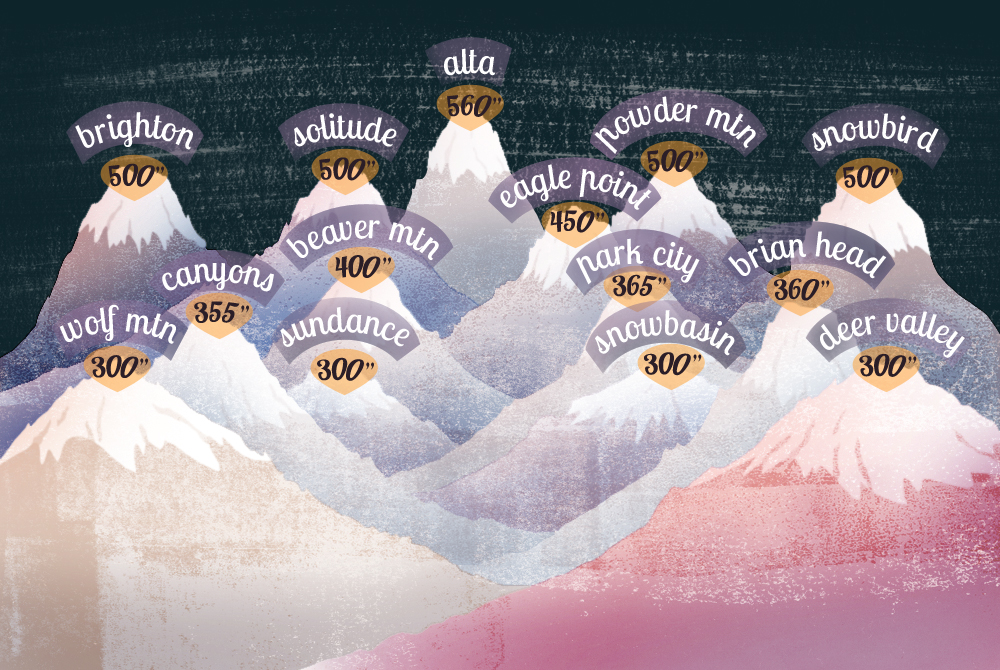 Those four mountains might get the most snow, but it’s not like you can’t pick from another seven that are located within an hour’s drive.

6. It’s got one of the largest LGBT communities in the US.

Betcha didn’t know that Salt Lake City was Advocate‘s #1 “Gayest City in the USA” in 2012. It dropped to #6 in 2013, but I’m betting that’s still a lot higher than you expected. SLC was the first in the state to pass anti-discrimination ordinances based on sexual orientation, and the LGBT community here is HUGE. The Pride Festival is one of the biggest events in the city and draws over 25,000 attendees, including (for the last couple years) a hundred or so members of the Church of LDS who come out to show their support.

If you think sushi in landlocked Utah sounds more like a death wish than a nice way to spend a night out, you’d be missing out on over a dozen of Salt Lake City’s best restaurants. Flown in fresh daily, the fish at Takashi is best served unsauce — there’s just no need to hide the flavor of ingredients this fresh. They’re not alone: A super-unscientific Yelp search resulted in 13 sushi joints in the area rated 4 stars or higher, over double the number I found in my (more populous) hometown on the California coast.

8. There are 12 local breweries in the area.

For a city the size of SLC, in the state with the lowest beer consumption in the country, that’s saying a lot. The people here love beer. The microbrew culture’s been blowing up since 1986, when Wasatch Brewery opened up shop in nearby Park City.

It might be the oldest, but it’s still the fav, even with 11 more awesome breweries in the area (including five medalists in 2013’s Great American Beer Festival). The styles they brew and serve run the gamut and make Utah one of the premier states of modern American brewing.

The International Rescue Committee and other advocacy groups have a big presence in Salt Lake City. Each year, hundreds of refugees are resettled here, where they receive the help they need to become self-sufficient citizens. You might not notice it as quickly as in other places in the country, but Salt Lake City’s way more diverse than it looks. An unexpectedly large number of cultures and religious denominations are represented here.

Salt Lake City’s the only big stop in the Intermountain West, which makes it a great spot for music by default. But in addition to that, SLC’s music scene is boosted by a huge pool of regional talent including Neon Trees, The Used, and Imagine Dragons. Even the SLC Arts Council’s gotten in on the action by offering concerts downtown in the park — and with bands you’d actually pay more than $5 to see. The Black Keys, MGMT, Bon Iver, Sonic Youth, and the Empire of the Sun have all played in the park in recent years.

11. The powder here is different. 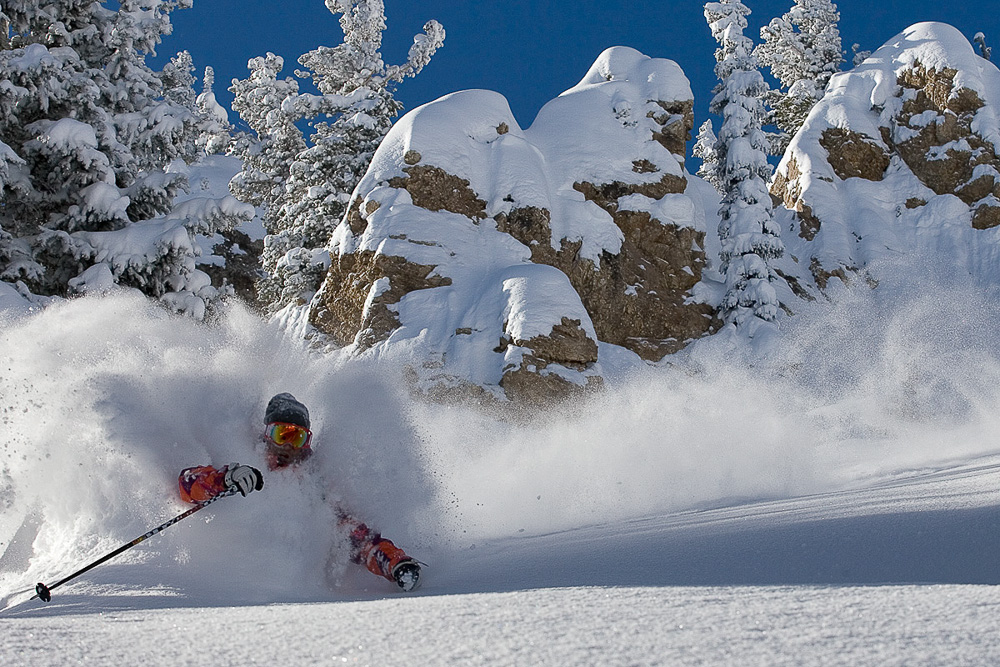 It’s more than just marketing hype. Most storms that hit Utah develop over the Pacific, then travel inland, losing moisture density as they go. After passing over the Great Salt Lake, they pick up speed and get colder and drier before spewing down all over the Wasatch. The effect is perfect for skiing: a nice dense base, topped with fluffy low-density powder. Science!

12. There are farmer’s markets all year long…even in the winter.

While most ski town residents are hunkering down trying to figure out how to mail-order groceries from warmer climates, Salt Lake City residents get to stock up on fresh local produce and super-fresh eggs at the SLC Winter Market.

13. The first (and only) ski-in / ski-out distillery in the world is just down the road.

Once your legs are shot from all that epic Utah pow, slide down the slopes to Park City’s High West Distillery & Saloon for a tasting session of their local small-batch whiskey and other spirits. You can also hit up one of the several bars and restaurants in Salt Lake City that serve this local fav.

14. It’s got the coolest library ever.

The Salt Lake City Public Library — just look at it!

You’re welcome, world. Salt Lake City is the epicenter of the fast-foodification of Southern fried chicken, and the only place you can chow down on a KFC chicken buffet while sitting next to one of the colonel’s original white suits.

Between Snowbird, Alta, Canyons, Solitude, Brighton, Deer Valley, Park City, Snowbasin, Wolf Mountain, Powder Mountain, Sundance, and Beaver Mountain, all located under 120 miles from the airport, skiers and snowboarders have access to a cumulative total of 28,247 vertical feet of the aforementioned epic pow. That’d basically be like standing at the tippy-top of K2, then straight-lining it all the way down to sea level.

It’s also 75 miles long and about 35 miles wide, making it bigger than the state of Delaware. And like the name suggests, it’s salty. This means floating in the Great Salt Lake is effortless (slightly smelly) fun.

18. The University of Utah is changing the future of medicine.

Genome mapping is a huge focus of the University of Utah’s genome center in Salt Lake City. The Utah Genome Project takes advantage of the U’s access to the Utah Population Database, which holds generations of medical and genealogical records unmatched anywhere in the world, to study the genetic cause of diseases including breast and colon cancer, heart ailments, diabetes, and more.

SLC has over 150 miles of bike lanes, multi-use trails, shared lanes, and off-road tracks. The entire city’s tourable along a 13.5-mile loop that goes through downtown, passes the farmer’s market, and hits tons of historical sites across the city. Plus, the city has infrastructure in place to help keep bicycle commuters safe on city streets, like bike turn boxes and bicycle-specific traffic signals.

20. Most people are ridiculously friendly and hospitable.

Maybe it’s all that fresh air and nature that surrounds the city, but the people here are just crazy nice. Whether you encounter them on the slopes, in the bars, or on the SLC streets, strangers won’t recoil at the sight of out-of-towners like you. Welcome to Salt Lake City!