YOUR FERRY will dock, late in the day, at a nondescript pier straddled by the dark carcass of a crane that was likely born in the time of the Belgians. Realise you have already used the word ‘dark’ in describing part of the Democratic Republic of Congo and curse. Promise not to do it again. Damn you Conrad.

Your cameras stay in your bag. Despite smiles from people you pass, you set out convinced that the Eastern DRC is the country-sized equivalent of Pyongyang. Worst place in the world to be a child. War. AK-47s. Underage soldiers in flip-flops. That sort of thing. Not that you’ve seen any.

They must be around though. You saw documentaries.

Meet with the chief of immigration. Dodge an entirely obvious play for a $20 bribe by pointing out that the form you are being asked to pay for is not, in fact, required. Be surprised when the chief rolls over (bureaucratically speaking) like a teddy bear and agrees, stamps your passport and waves you on your way.

Be further surprised when the immigration chief’s second in command reappears in crisp civvies outside. Wearing a clean, blue collared shirt with impossibly impeccable folds (him, that is. You look like a filthy Indiana Jones impersonator), he offers to help you find a local place to stay.

The local place has no name, costs $10 a night and comes with breakfast and mosquito nets. Write down that it is near the cellphone mast, and that to find it, you need to ask for Birungi.

Sorting out the basics

Next up, find a SIM card. From Vodacom, because the Eastern DRC belongs to the gods of Vodafone and Primus beer. So pay your dollar for a little blue SIM card. Airtime starts at a dollar too, and will get you five minutes of local calls, or 120 text messages. Recall that the government has suspended text messaging as a means of thwarting post-election violence. Put down another dollar for more airtime. You’ll need it.

And a dollar for a bottle of water too. Realise that lots of things here cost a dollar.

Like dinner. Forget that this place is meant to be scary as you bury your face in a mountain-sized plate of rice, plantain, and some of the most flavoursome beans you’ve probably eaten in your life. Reflect on how much you disapprove of travelers who call any local food the most delicious they have ever had.

But also, that some plate of beans, somewhere, has to have been the best you’ve ever had, and you can’t immediately bring to mind any contenders. Plus, dinner is candle-lit. The generators in town haven’t come on yet.

After a refreshing post dinner bucket shower, return to your room for the night. Wonder out loud to your roommate about bucket showers. How are you meant to fit so much gangly body in so little water? Despite being cleaner than you were on arrival, fail to shake the feeling that you might lack a certain finesse. Make a note to look up ‘bucket showering technique’ when you get back.

When the generators kick in, appreciate the good fortune of finding yourself in a room with electricity as you trip over your luggage to plug everything you own into a lonely plug point to charge. If you are in room #3 of this establishment, you will realise that your lightbulb is a deep red. Like a photographic development lab. You will probably also wonder briefly how on earth a red lightbulb made it all the way out here. But you will also be quite tired.

Wonder why you bothered setting an alarm, as a massive circle of drums and French gospel starts singing wishes for the lord. 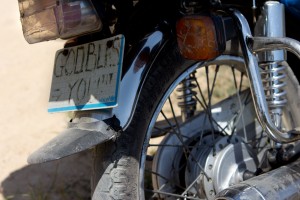 Lie back, feeling rested in the morning cool. The music grows on you, until you close your eyes gently and sip it like early morning coffee. Until a rooster wakes up outside your window and gives you a heart attack.

Fuck you rooster. I was at peace.

You are only transiting, so want to make an early morning start to the town of Bunia, further west. Catch a small Chinese-made scooter from the main drag, down near the Vodafone kiosks that sold you your SIM card. The drivers agree to take you for $10. They will forget this when you arrive in Bunia later, but you won’t know this yet. It will be a good deal regardless.

The road to Bunia will be entirely dirt and frequently potholed. But the views as you climb out of the Rift Valley will be worth every bump and slide. You will watch in horror as your scooter driver runs the first army checkpoint without stopping. By the third, you will have warmed to the idea that this is something that scooters appear to be able to do without consequence. Wave to the soldiers on the fourth.

And welcome to the Eastern DRC.

It’s not everything you’ve read in the news.