You’ve just woken up in the Alobar1000 hostel in Thamel, and the early morning honking is picking up like the crescendo to a shit trance tune from the ’90s. You’ll hear throats being cleared like clogged gutters in the distance and a dry heave or two for good measure. Jump right into the hippied-out arteries of Thamel, fitted with opium dealers floating around like white blood cells, and tie-dye and incense lining the outer layers of shopfronts.

Pumpernickel does decent pastries and coffees. For something more substantial, get your breakfast at New Orleans restaurant. Pull up to a table in the courtyard and bust out your conspicuous map to see where you lie between temples and markets. They do a good hot meal that’ll keep you going until you find a steaming momo stand.

Pay up and wind southwards through the network of streets and paved (and unpaved) pathways towards Ason. Make sure you float along using your inner compass and don’t sweat it if you get lost. Grab a cheap sugarcane juice on the roadside to boost your energy levels. If all goes well, you’ll arrive at a busy square after 10 minutes of wading through a sea of Suzuki Marutis and middle-aged French travellers.

In the corner of this square you’ll see steam rising in front of an impressive momo (the Nepalese cousin of the dumpling) assembly line. There will be three guys, each tasked with rolling the buff (buffalo) or chicken into a ball, flattening the dough, or wrapping up the finished ball and tossing it into the steamer. The steamer is a tiered pot the size of a small armchair that houses endless momos.

After snacking on a cheap plate made out of leaves, go on south towards Durbar Square. This preserved section of Kathmandu once held royal palaces and is surrounded by intricate brick and wooden temples. After admiring the architecture with an air of forced sophistication, hail a taxi and avoid negotiating. Use the meter. Drivers are now supposed to do so, and it works out generally cheaper than any deals you might strike. A bunch of the drivers have found a solution to this new law, which involves not picking you up. If this is the case, try making a deal for something close to half the price of what they start with (this varies of course, and if you want a rough idea of an appropriate fare, ask passing pedestrians what they think).

Make a choice between either Swayambhunath or Bouddhanath temple and hop into the cab. It wouldn’t be 24 hours in Kathmandu if a good amount of those hours weren’t spent in a cosy melting pot of tires and exhaust. 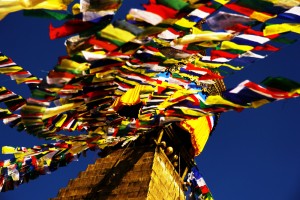 Swayambhu has a panoramic view of Kathmandu’s built-up valley floor of greys and terracottas under a film of light smog, and the surrounding peaks beyond. For me, despite its supreme view, the temple itself doesn’t have the same spiritual presence as Bouddha. In the middle of the valley, city, and sounds, Bouddha is like a holy merry-go-round for adults. Monks and visitors circumnavigate the stupa in a trance-like state. Prayer flags rise and fall in the wind. There are a load of cafes to choose from surrounding the stupa.

For lunch head to ‘Restaurant Lane’ in Patan and have a pizza and a sneaky beer at Moksh. Check out their programme, as they often have live events and film screenings in the evenings. There’s a range of restaurants to choose from in the area if you want something else.

Make your way out of town to Bhaktapur, which is like Durbar Square x 100. This heritage site is far away from the incessant noise of Kathmandu, and its buildings are relics of what much of the wider area looked like back in the day.

As the afternoon starts to fade, get a taxi back to Kathmandu. Have a rooftop massage at Himalayan Healers in Thamel, if your wallet permits (think of it as the price of three beers). Speaking of, you should now have done enough to feel that you deserve a beer, so go along to Phat Kath for dub and reggae vibes, shisha pipes, and smiling staff on a natural high. They do a good range of food, but if you just can’t get enough of momos, stuff your face full of some hand-crafted spinach and cheese bad boys. If you’re more up for a curry, go across the road to Third Eye for some of the best in town.

Thamel will provide you with your night out. Electric Pagoda is a good place to start. Wine and beer isn’t cheap in Nepal, and if your budget isn’t looking too healthy then your best option is local rum — Khukri is a good brand. Avoid the cover bands that haunt the rooftop bars like Bono’s gang of gargoyles. Check out Purple Haze for live music and a vast, minimalist venue with all the death metal fanatics headbanging religiously. For a final drink, try Sam’s Bar, two minutes away.

If you hear the words “Fire Club,” run home as fast as your little feet can carry you…or go there, but expect a snake pit of epic proportions and the tin-can monotony of Rhianna and friends.

5 tips for 24 hours in Kathmandu

Tagged
Trip Planning Kathmandu, Nepal
What did you think of this story?
Meh
Good
Awesome

Tonight’s buck moon is happening during the best meteor shower of the year
The difference between butter chicken and chicken tikka masala
The optimal road trip to see all the US national parks, mapped
You can now listen to a 100-track playlist of Anthony Bourdain’s favorite songs
Hawaiians are thrilled about Olympic surfing, but they’re not so sure about the US flag

I spent 10 days in a Buddhist Monastery in Nepal. Here’s how it made me a better traveler.

Beyond the sights: Becoming a student of place