The GPS is clueless. We trust the instructions of farmers to get us to Hotel Fazenda Pai Mateus, a large cattle ranch near Boa Vista, about 200km inland of João Pessoa.

We watch the sunset nearby at the “Place of Many Stones” (Lajedo), where dozens of smoothly polished granite boulders lie scattered over a bowl-shaped elevation above an artificial lake, as if the gods have sprinkled peppercorns over the landscape.

From the top of a hill, caatinga vegetation covers 360 degrees of view — green in the rainy season, white during the dry season, softly tinged under a setting sun.

The boulders have been eroded to form hollows; one is aptly called Pedra de Capacete — Helmet Stone. In the 18th century, a curandero lived in one of the hollows. He received patients here for 10 or 15 years and then vanished, his memory kept alive in the name of the site: Pai Mateus (Father Matthew). 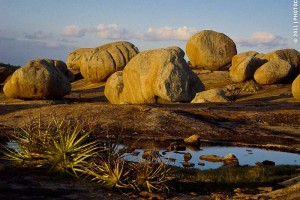 Before him, the Cariri Indians inhabited the area for centuries until the Portuguese wiped them out. Our guide indicates their eroded rock paintings.

Life in the Sertão
Rutted tracks cut through plantations of thornless palma. The Sertão suffers from droughts and does not have sufficient grass for all the cattle. Palma is fed to cows during the dry season.

Owners of extensive cattle ranches often live in cities like São Paulo and visit a couple times a year to oversee operations. Others live full-time on small, barely self-sufficient farms. Those who do rarely travel beyond their everyday surroundings. Inbreeding is visible in some of the facial features of Sertanejos we talk to.

But of the hundreds of dinosaur prints found in this region, only 52 have been preserved. We stare at the 110-million-year-old fossilized tracks from the catwalks constructed two meters above. Scientists estimate the creatures weighed between three and four tons. 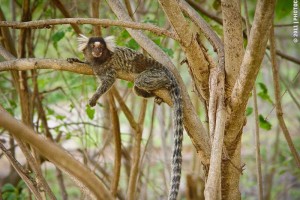 To be honest, we spend more time checking out the tufted capuchin monkeys that skitter through the surrounding trees, challenging us to a staring contest. They win.

The site is cool enough, but the question is how much longer the prints will last — human-caused deterioration is plainly obvious. “Lack of funds to properly protect them,” the caretaker explains. Yet he allows us to camp in the parking lot even though there is no guard.

In the museum, the displays and explanatory texts have become unreadable.

The UNESCO-listed Serra da Capivara National Park contains some 800 prehistoric rock carvings and more than 30,000 generally well-preserved paintings, claimed to be the largest concentration in the world.

There are images of men hunting armadillos, a woman giving birth, a man harvesting honey, people playing, fish, emus. Fortunately, our guide Cida has worked here for 20 years, is passionate about her work, and doesn’t seem to tire of my never-ending flow of questions. 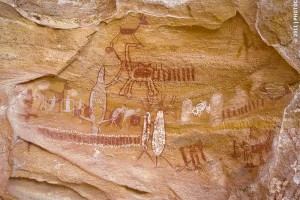 We learn that human-produced charcoal found at the site has been dated to 100,000 years ago. This is a revolutionary discovery, as the generally accepted anthropological theory is that the first humans came to the Americas via the Bering Strait just 12,000 years ago. The 100,000-year theory espoused here at Serra da Capivara is not widely supported.

The park is also home to the so-called Einstein monkeys, who use tools to gather food. They transport flat stones from the river to nearby groves of cashew trees, place cashews on one stone, and crush the nut with another.

We see the stones and shells but no monkeys. They’re not shy — you just have to visit in cashew-harvesting season (September).

Typical Brazilian food and distances
Women are the proprietors of roadside restaurants, which on average consist of three tables and six rickety chairs. We are served set meals — Brazil’s quintessential almoço of rice, beans, manioc, and a piece of beef, costing $6-10US. The plates are large enough to share.

“Pertinho” (close by), the farmer responds when I ask how much farther Jalapão is. For Brazilians everything is close by, much different from what our (Dutch) interpretation of “pertinho” would be.

In Parque Estadual do Jalapão, we climb dark-orange, Sahara-style dunes, dive in waterfalls, bathe in springs surrounded by Buriti palms, and stare at dark red rock formations with names like Cathedral Hill. The area is popular with off-roaders, mountain bikers, and hikers. 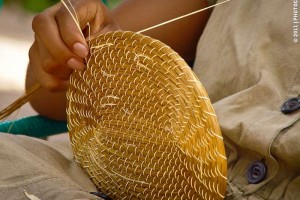 Amid this odd collection of landscapes lies Mumbaca, a quilombo — once a refuge for runaway slaves. Today, Mumbaca is home to women’s cooperatives that produce handicrafts of capim dourado. We watch how two young women weave strands of the golden grass to create a table mat.

This grass, which turns gold as the season progresses, grows only wild and only in Brazil — in just three places, to be exact: Bahia, Piauí, and Maranhão. The women artisans who work with it adhere to strict guidelines to prevent overuse. Still, their attractive handicrafts dominate many Brazilian markets.

Tagged
Budget Travel Insider Guides Brazil
What did you think of this story?
Meh
Good
Awesome