View all travel news
Top Destinations
Top CitiesView All Destinations
Trending Regions
Trending Cities
Load More
As part of Matador’s partnership with Canada, where journalists show how to explore Canada like a local, Jeff Barlett picks out some of his favorite rides in Jasper, Alberta.

1. Valley of the Five Lakes

Three German cyclists (a father and his two adult sons) lent me a hex wrench to fix my seat. It hadn’t broken; it had just rattled loose when I cleared a technical rock section for the first time.

The eldest son looked beat, like my wife had when I’d introduced her to mountain biking on this same trail last summer. I bet he wanted to throttle whatever Parks Canada employee had designated the trail as intermediate, too. His brother kept asking where locals rode and which trail was my favorite. Their father didn’t say too much. He just looked eager to ride.

Details: Valley of the Five Lakes Map | Distance: 24.00 km return | Difficulty: Intermediate to Advanced | Note: After a rainy day, this trail is the first to dry.

The lake loop is the kind of ride that I finish at the pub. I don’t care if my legs are coated in mud or my face pockmarked by mosquito bites, the ride calls for a patio table and a cold pilsner. I’ll usually want to down my beer in silence but my riding partner often forces me relive the entire experience, saying things like:

“That downhill was sick. Can you believe how fast we were going?”
“I can’t believe you didn’t ride that log ride, it was easy.”
“You beat me up the climb, but your 29er rolls over anything.”

I always just nod along without listening, too busy mentally crafting tomorrow’s ride. 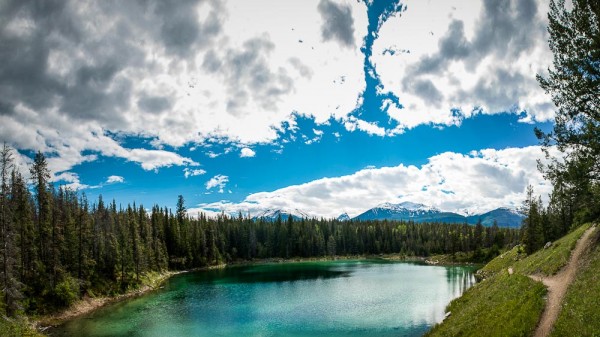 Riding Overlander reminds me of my honeymoon in Argentina. My wife and I spent it cycling across Patagonia. It was my wife’s first cycle tour and we’d made it through the first two weeks with nothing but positive memories. Just as I thought we’d settled into a rhythm, my wife lost control. I watched as her bike skidded towards the edge of a steep switchback and closed my eyes. The impact never happened. She saved it.

The single track is smooth, but it’s carved into a scree hillside that wouldn’t stop a tumbling cyclist until he or she plunged 100+ meters downhill into the Athabasca River. The double track is forested and fast but rife with aggressive calving elk. The descents are better suited for downhill bikes than cross-country rigs but the climbs are the opposite.

I ignore it all and ride. Once I hit the highway at the far end, I turn around and ride it again.

Details: Overlander Map | Distance: 15.50 km one-way | Difficulty: Expert | Note: Most locals won’t ride it without a partner because of its difficulty. 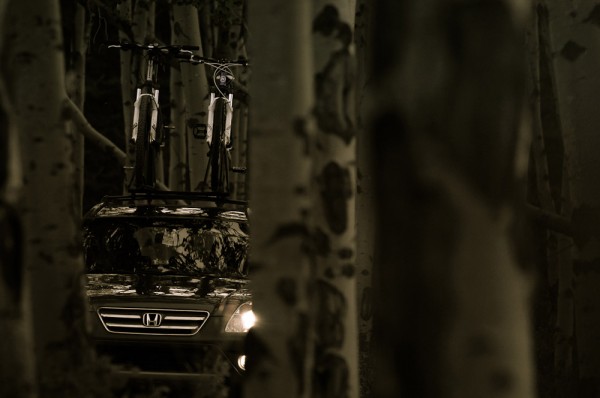 When the third grizzly bear crossed the Edith Cavell Road, I swore off solo rides. The climb was bad enough, lasting 27 kilometers, but the guy behind the counter at the Parks Canada office never mentioned wildlife hazard. And then it started to rain and I swore off biking in general. Instead of turning back, I pushed on past the hostel. It was only two kilometers to the summit. Now, instead of roadside shrubs and alpine flowers, there were snow banks. I was freezing. Shorts, t-shirt, and fingerless cycling gloves did nothing against the cold glacier air.

When the road ended, I turned back. It took almost two hours to climb but it only took 20 minutes to get home. Descending was a blur of dotted yellow lines, pine trees, and wildlife. I met another cyclist grinding his way towards the summit in the freezing rain. I shouted, “It’s worth it!” as I flew into the next corner. 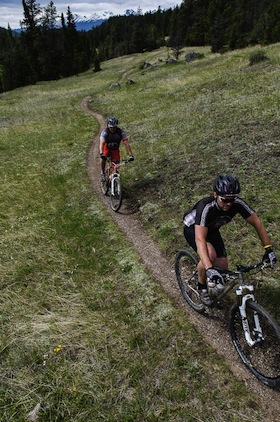 Every Tuesday night at 7pm, I join a group of cyclists outside Freewheel Cycles to chase the shop mechanic, Eric, on a group ride. Sometimes we’re 30, sometimes we’re only 15, but we’re always keen to put up a fight. Our bikes range from full suspension rigs to 29er hardtails, with 27 or 30 gears. All of them are aluminum or carbon fiber. Eric rides a rigid single speed made of steel.

No matter the trail, the storyline doesn’t change: I pedal hard and shift gears for ascents and descents. Eric grinds and coasts – his bike’s gearing is too easy to pedal downhill yet tough to pedal uphill. His momentum is always just enough to stay a turn ahead. At the top of especially tough climbs, he’ll pause and say, “Awesome riding” or, “You’re a strong rider.” I’ll be too busy gasping for air to respond.

Later, we all crowd around a table at the Jasper Brew Pub to enjoy a pint of free lager. Eric drinks water.

Tagged
Cycling Insider Guides Alberta, Canada
What did you think of this story?
Meh
Good
Awesome