1. Scuba diving near a raging maelstrom — on purpose

Located in north-central Norway close to the city of Bodø, there’s a slender channel that connects the outer Saltfjord with the large Skjerstadfjorden. The big deal? It happens to have one of the strongest tidal currents in the world. It’s called Saltstraumen, and it’s existed for over two thousand years.

Up to 520,000,000 cubic yards of seawater — that’s enough to fill 160,000 Olympic-sized swimming pools — forces its way through a less than two-mile-long and less than 500-foot-wide strait every six hours. This makes for some intense whirlpool action. Vortices up to 30 feet in diameter and 15 feet deep are formed when the current is at its strongest. And you can actually dive or snorkel nearby with Saltstraumen Divers’ Camp.

This isn’t the easiest diving, but the feeling of drifting with the current, first one way, then the other, to see tons of coral, crustaceans, fish, sea slugs, and sea urchins — plus crazy-looking jellyfish-like colonies called hula skirts — is definitely worth braving the tumultuous waters. Total beginner? Saltstraumen Divers’ Camp can show you the ropes before dropping you into the deep end. 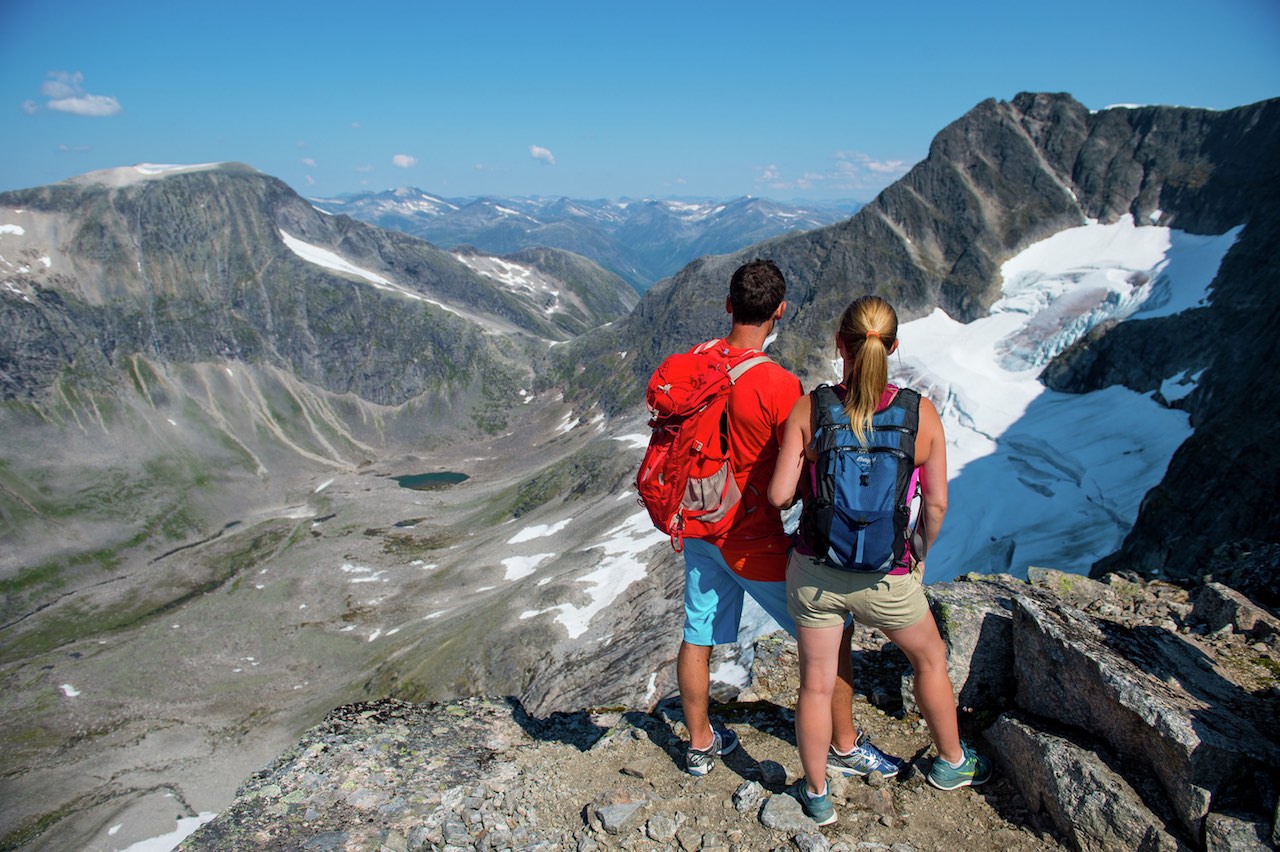 Eleven of Norway’s 20 largest glaciers are found in the Fjord Norway region; Jostedalsbreen — the biggest in all of mainland Europe — covers 188 square miles and has ice nearly 2,000 feet thick. For reference, that’s Albuquerque completely frozen solid under more than 50,000 tons of ice. These glaciers carved out the country’s rugged, jaw-dropping landscape, and there’s no better way to appreciate their slow-moving power than getting up close.

Glacier hiking is no joke, though, and you’ll definitely need a guide. There are dangerous crevasses, and avalanches are always possible. The terrain is magnificent, but also unforgiving. ICETROLL is a trusted option to go with — they also run glacial kayaking trips, with all abilities welcome.

And you’re not limited to Jostedalsbreen, either (although it’s part of Jostedalsbreen National Park and you’ll find the Norwegian Glacier Museum nearby, so it’s worth a stop regardless). Other notable glaciers in Norway include Folgefanna, part of Folgefonna National Park; Austfonna on the islands of Svalbard, one of the largest icecaps in the world; and Svartisen, found in Saltfjellet-Svartisen National Park.

3. Hanging out with the indigenous Sami while cruising along on a sled pulled by reindeer 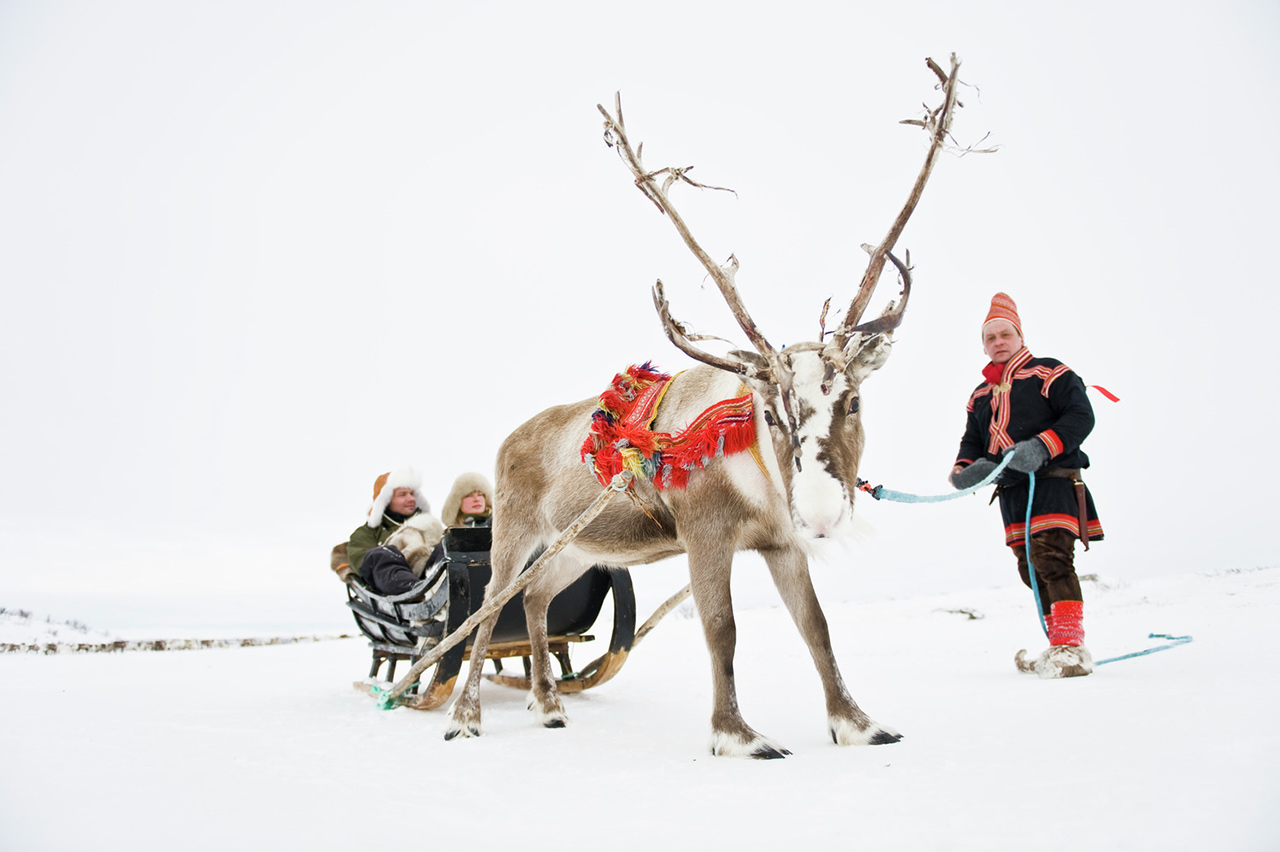 Ever wondered what life is like in the extreme north? Finnmark is Norway’s northernmost county — like really up there. It’s as far north as parts of northern Siberia, and it shares its borders with Russia and Finland. We’re talking nonstop sunlight between mid-May and August, Arctic tundra, and birch forests filled with reindeer. Finnmark has a wild feel — try not to feel tiny and insignificant standing next to the the North Cape sea cliff as it rises more than a thousand feet above sea level.

But before you start thinking yourself tough for spending three days up here, remember that Finnmark is home to the indigenous Sami people, and they’ve lived in this area for at least 5,000 years. In the nearby county of Troms, you can explore different facets of the Sami culture, including seeing the tradition of reindeer sledding firsthand (yep, reindeer sledding!).

4. Testing your driving skills through Trollstigen

Winding its way up hairpin curves — the clenching-your-fists-on-the-steering-wheel kind of bends — is the Geiranger-Trollstigen National Tourist Route. Trollstigen, which means “trolls’ path,” is about a six-hour drive from Oslo and well worth the trip. You’ll be meandering your way along 66 miles of troll-country — think craggy mountain peaks, mossy cliffs, and rocky waterfalls — through Strynefjell and Romsdal.

This road isn’t for the faint of heart — inclines of 9% help up the excitement — but there are plenty of places to stop and reap the rewards of your white-knuckled drive, like the six rest areas and their awesome photo opps. These aren’t the rest areas along the Interstate back home, though. Rather, they’re viewing platforms jutting out over a vast landscape where the road you’ve just driven looks like a zigzagged scratch on the side of the steep cliffs.

You’ll eventually spot Ørnesvingen (Eagle Bend) as it rises 2,034 feet above sea level, and cap off the trip with a visit to the Syv Søstrene (Seven Sisters) Waterfalls, where seven nearly identical streams tumble down a cliff into a crystal clear lake — with some water free-falling as far as 800 feet.

Side note: Serious bragging rights are available if you bicycle this route.

5. Grabbing your surfboard and hitting the waves 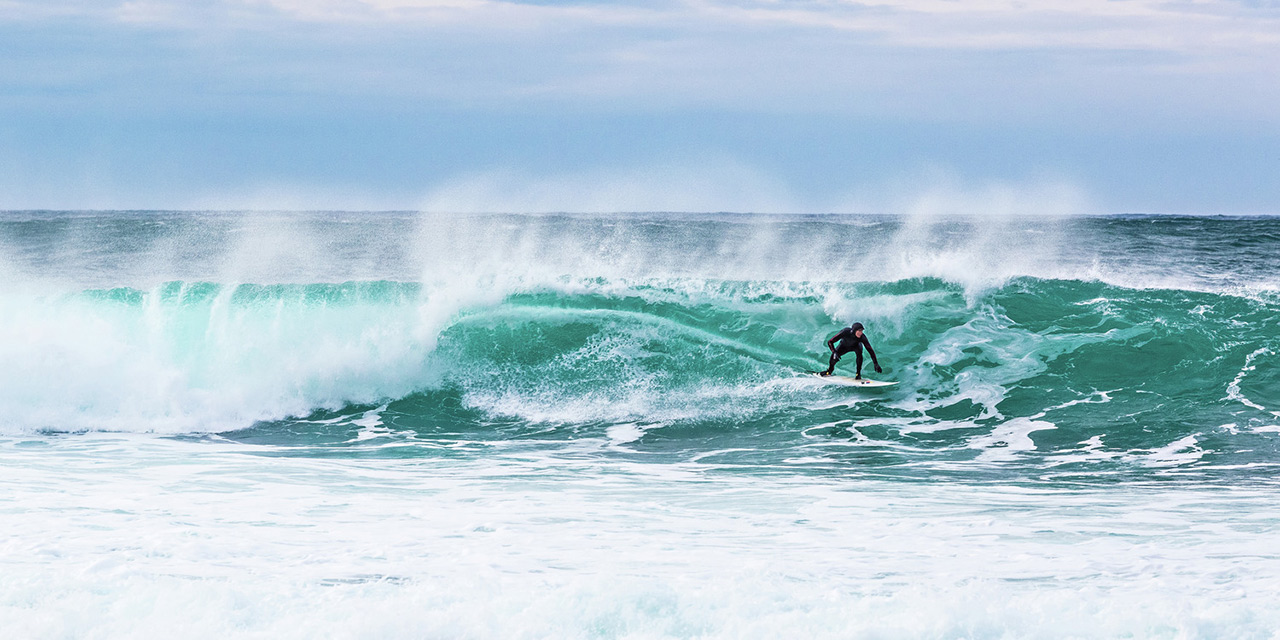 Unstad Beach is in the Lofoten Islands, about 3 hours by air from Oslo, and here, surfing isn’t as most of us know it. There’s a right-hand point-break, a left-hand reef, and incredibly wild and unpredictable weather that keeps things interesting. It also keeps the weekend warriors out — only the most committed and adventurous surfers make the trek way up here in the Arctic Circle to the land of 24-hour sun (well, at least for part of the year).

Oh yeah, and you’ll need a top-of-the-line cold-water full suit with a built-in hood, thick booties and gloves, and a thicker board (with all that extra neoprene, you’ll weigh more and paddling will be more difficult). Want to learn a little more about surfing under the midnight sun? Unstad Arctic Surf is the world’s northernmost surf school.

The best part about surfing up here is you can end your session by cozying up fireside and sipping karsk — a hot Scandinavian cocktail combo of coffee and moonshine. Congrats, you’ve officially earned bragging rights among your surf friends back home. 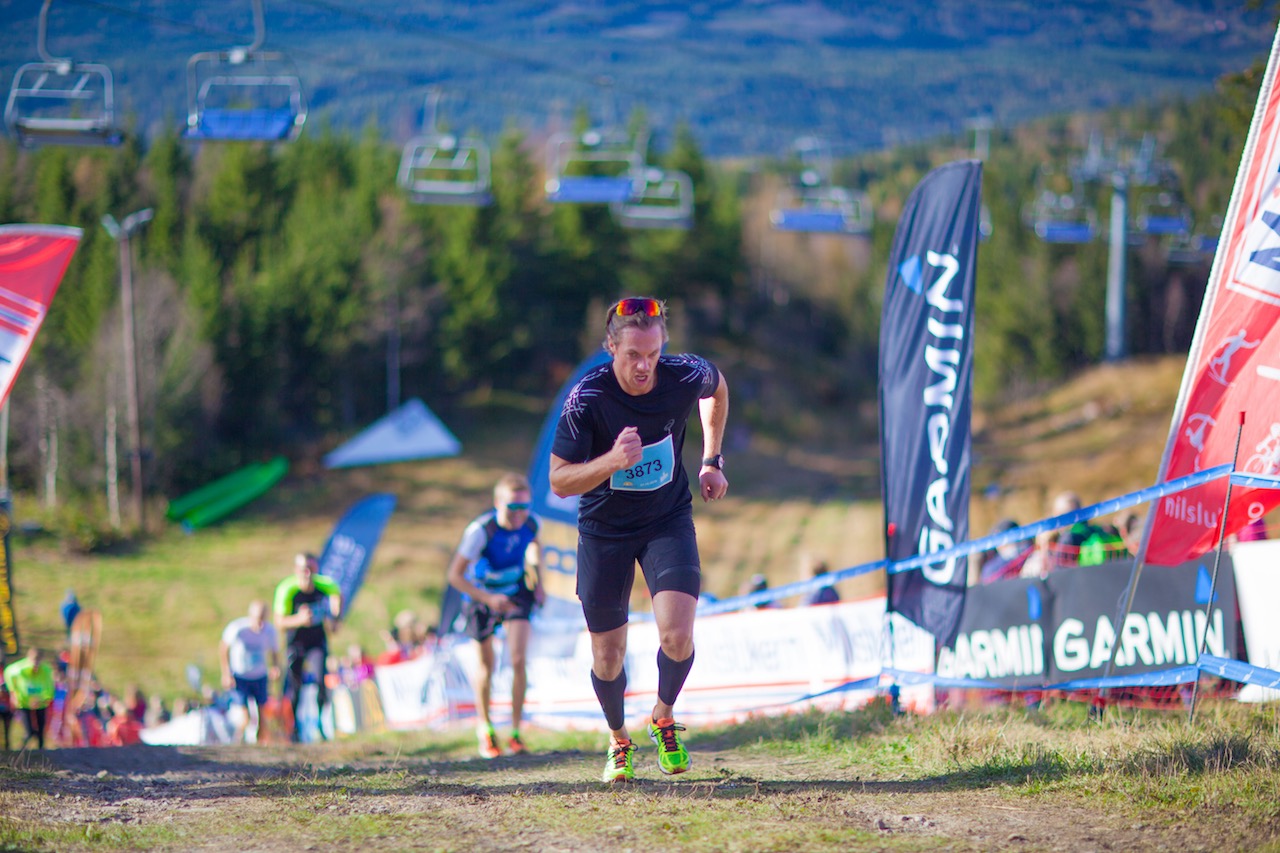 Bet you didn’t know Norwegian ski slopes aren’t just for skiing — they’re for racing up, too. Oslo’s steepest running route is up the side of Oslo Summer Park, the country’s most popular ski resort when it becomes Oslo Winter Park, sitting 30 minutes outside the city center. The trail, known as Oslos Bratteste, gains 1,300 feet over 1.7 miles (bratteste means “steepest” in Norwegian). If you’re Ironman, you’ll finish it in around 15 minutes; the rest of us will take about 45.

You can access the trail for running in spring, summer, and fall, and there’s an official race every year in late September. Look for the chairlift station at the bottom of the Wyllerløypa run, where the course starts, and then head up the Helveteskneika hill on (well-prepared) foot.

But if you’re not in the mood to prove something, Oslo Summer Park also has an equally impressive ropes course (there are several designed for all ages), 3,000 feet of ziplines, and Tigerspranget (“The Tiger Leap”), where you’ll freefall for 13 feet before getting lowered safely back to the ground.

7. Spending the night in a glorified igloo with little more than a sleeping bag 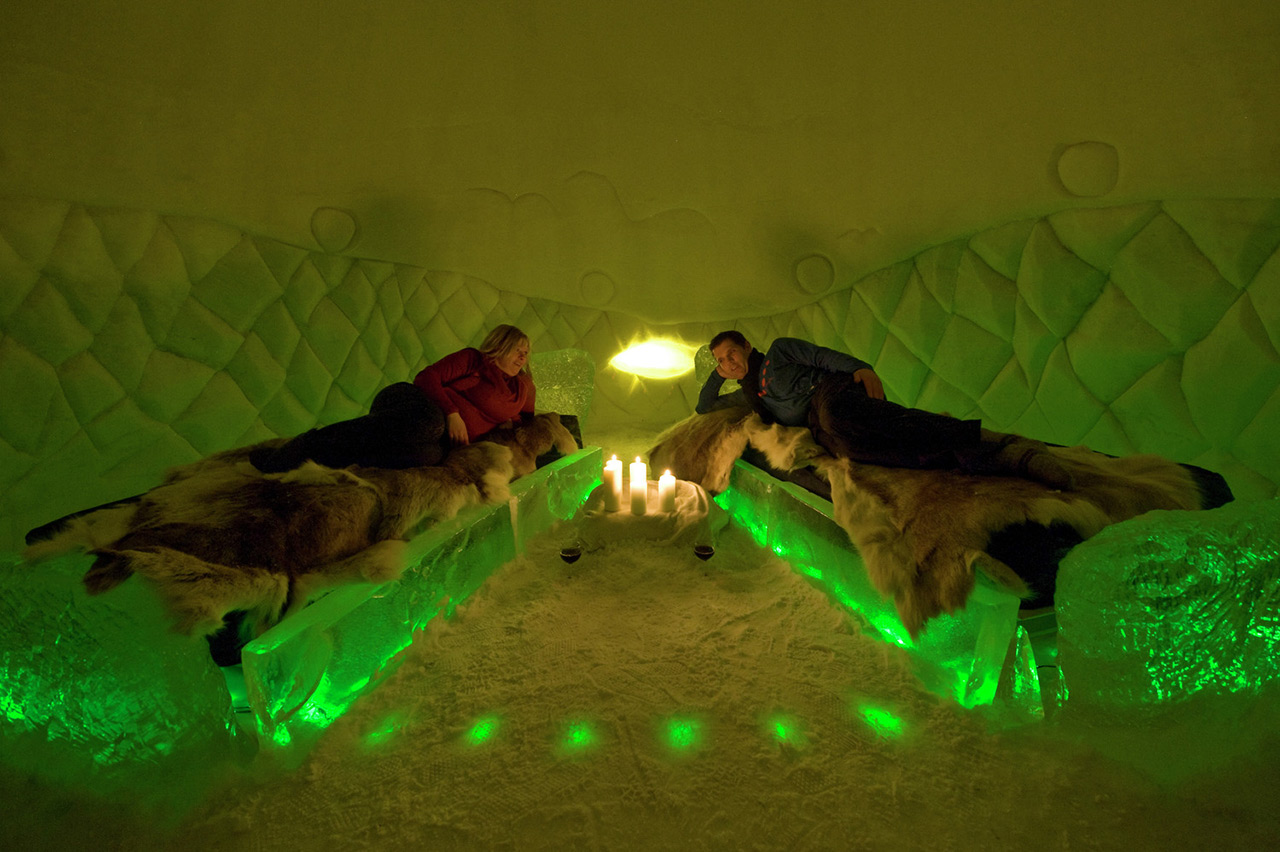 This is not a year-round hotel, because of the type of conditions required to keep it completely frozen — i.e., winter. Plan your stay at one of the suites at Kirkenes Snow Hotel anytime between mid-December and spring. There are 20 guest rooms, all unique in their ice sculptural design (some have wall murals of wolves, others penguins, others Viking ships). What they have in common is they all come with nothing more than a large and cozy mattress, wool socks, and a hefty sleeping bag built for the Arctic — and you’ll need it. The rooms are kept at about 26 degrees.

Alcoholic crowberry shots at the hotel ice bar will become your new best friend, or warm up with straight vodka in an ice-glass (as in, a glass made out of ice). More than 15 tons of ice from a frozen lake close to the hotel are used to construct the bar and sculptures, and everything is redesigned and rebuilt every year.

If you can’t handle the cold, you can always head over to the heated lobby or the Gabba Restaurant, where you can sit by the fire and gorge on sausages with potato pancakes and mustard. If outdoor activities are more up your alley, go watch the reindeer, head out on a husky trip, or just gaze up at the night sky and wait for the northern lights to blow your mind.

8. Going down The Well 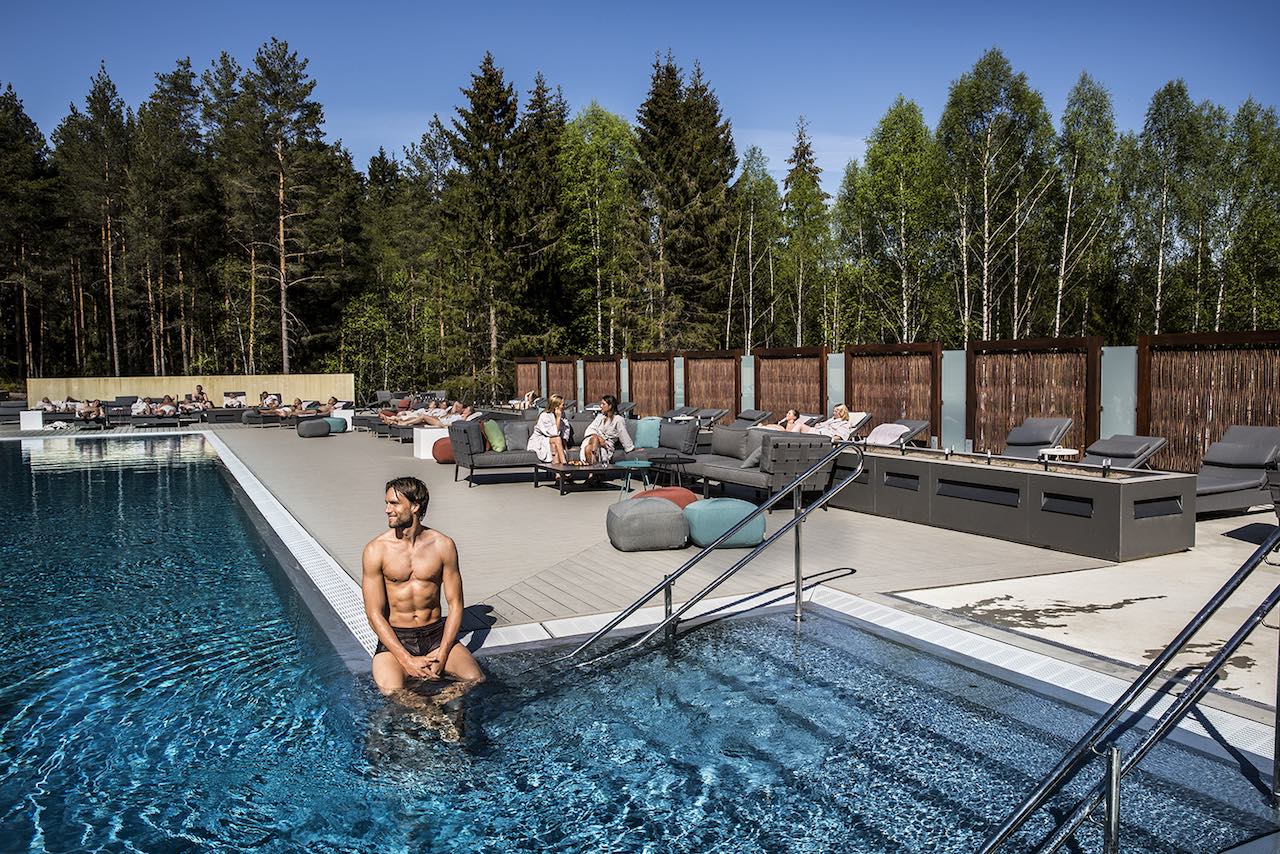 Even superheroes would need time off after days of scuba diving, surfing, and sledding. That’s where The Well comes in.

It’s Scandinavia’s — not just Norway’s — largest spa and bathhouse. It’s over one hundred thousand square feet, and is more akin to traditional Roman baths (and the culture that birthed them) than anything you’ll find in the States. There are 11 pools (both indoors and out), 15 saunas and steam rooms, jacuzzis, relaxation rooms, waterfalls, and — because you’ll want to stay here the entire day — restaurants and bars. That’s not even the full list. For the record, everything is adults only, and nudity is common.

The Well is 20 minutes from Oslo’s center and is open almost every day of the year. What’s more, you don’t have to worry about how to get here — the property runs a shuttle to and from Oslo at least five times a day. Let the relaxation commence.

This post is proudly produced in partnership with Visit Norway USA.
Tagged
Outdoor Trip Planning Norway
What did you think of this story?
Meh
Good
Awesome