South Dakota’s Black Hills were chosen for the carving of Mount Rushmore National Memorial due to the area’s smooth, fine-grained granite, and those small but steep granite peaks are also a perfect playground for climbers. More than 600 climbs have been recorded in the area, with the pinnacles and spires of the Needles attracting hardcore climbers from all over the world.

If you’re not a technical climber, it’s still a lot of fun to explore the easier boulders, and from up high you get epic sunsets with views over the pine forests and presidents. Or, to try rope climbing for the first time, head to Sylvan Rocks Climbing School & Guide Service. They’ll rent you all the gear you need and teach you the ropes ($82 per person for groups of two or more).

2. You’ll have a hard time choosing your favorite cave. 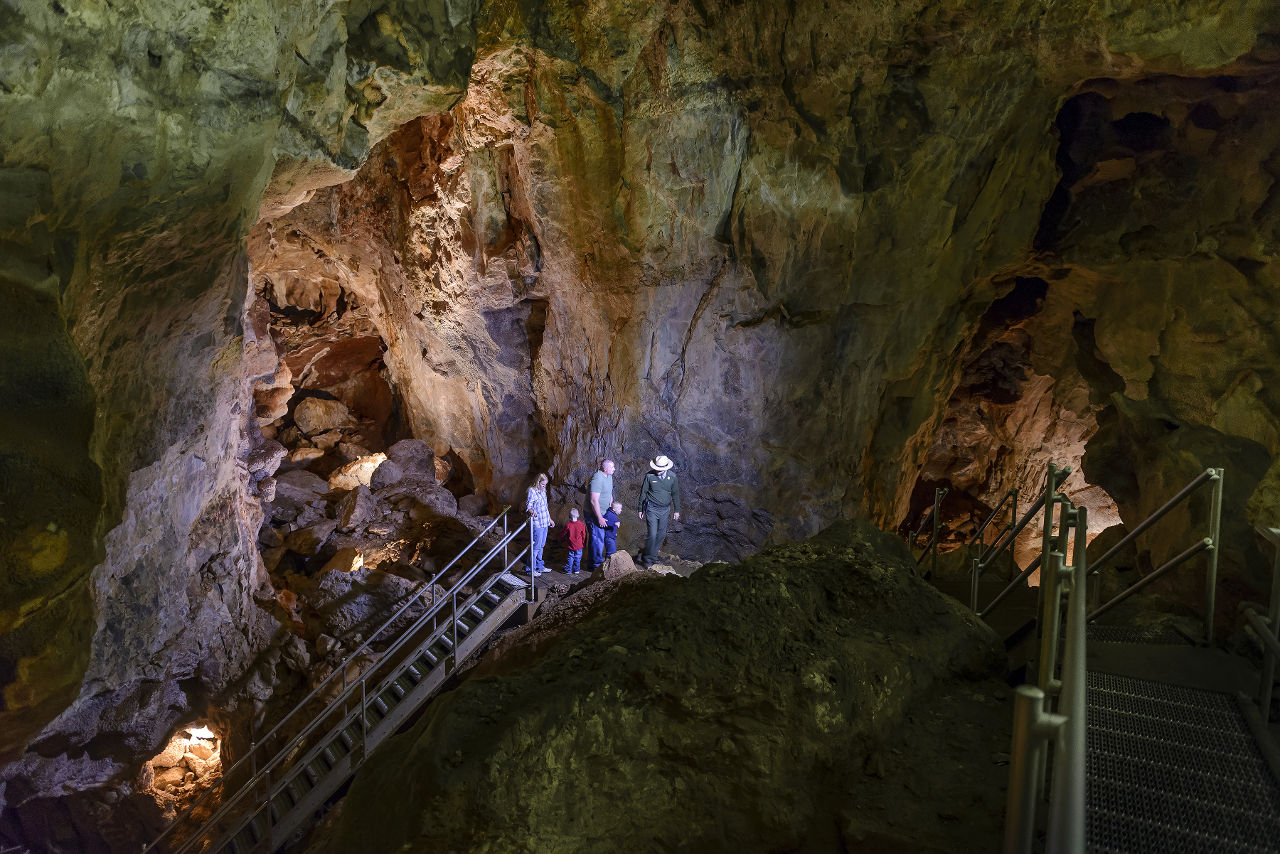 Beneath the Black Hills lie two separate but adjacent cave systems. Jewel Cave National Monument and Wind Cave National Park are the third and sixth longest systems in the US, and while their main entrances are only miles apart above ground, they have totally different subterranean properties.

Wind Cave gets its name from the movement of air due to changing barometric pressures, creating inward and outward “breaths,” and unlike most caves — typically studded with stalactites and stalagmites — it’s covered in rare boxwork formations (honeycomb-patterned calcite). On a tour, you’ll head down about 150 steps before winding through short and narrow splits of rock.

Jewel Cave is named for its delicate strands of gypsum and sparkling calcite crystals. Touring here, you’ll venture through large chambers, rounding boulders and slipping through tight fissures. In winter, more than a thousand bats hibernate among the crystals. Cave tours at both sites start at $10 per adult, but you can take advantage of the visitors’ centers, nature trails, and scenic drives at no cost. 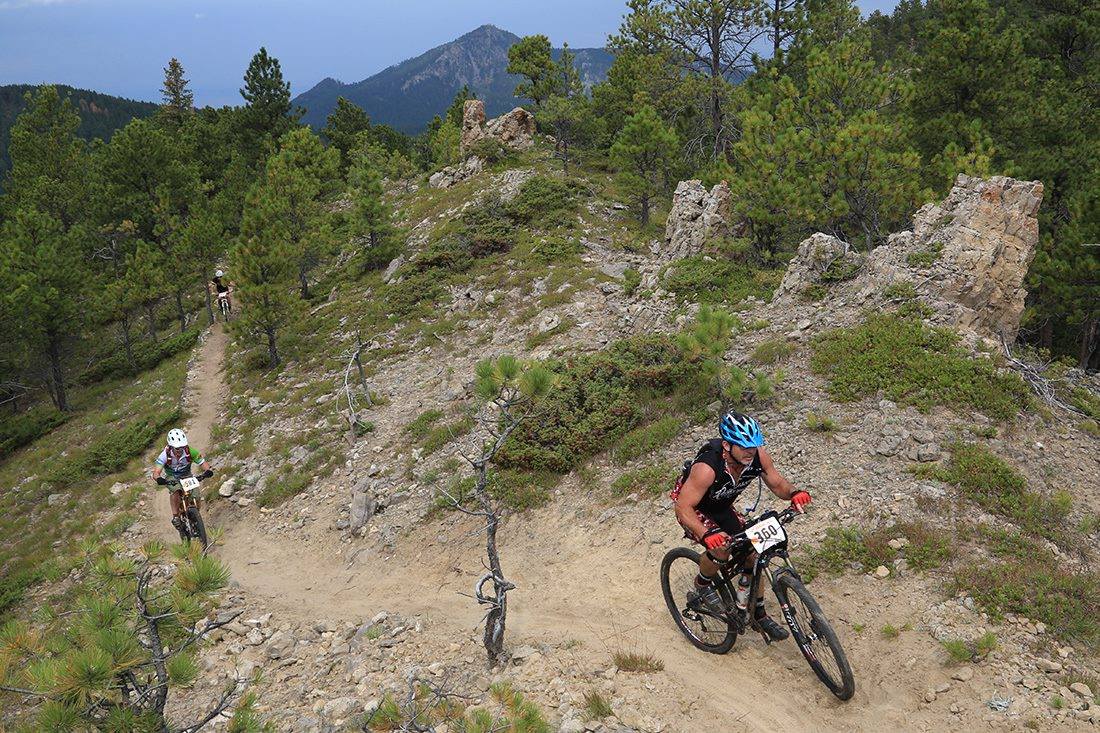 With settlement of the Dakotas came miners, loggers, railroaders, and cattle ranchers, and word is spreading that the trails they left behind are stand-out rides with a fraction of the traffic of, say, Moab or the Colorado Rockies.

The George S. Mickelson Trail is the old railroad line between Deadwood and Edgemont and has been converted into a 109-mile packed gravel trail. The mild slopes and easy access from 15 trailheads see cyclists of all ages and abilities take to its tunnels, riversides, bridges, and awesome viewpoints ($3 daily use fee). And there are another 400+ logged miles of single track crossing South Dakota’s prairie and pine-filled landscapes. Extreme racing is also big here. There’s the Dakota Five-O, Black Hills Back40, and Black Hills Fat Tire Festival — all are renowned for their grueling rides through spectacular terrain.

A growing trend in the winters is fat biking — pedaling through snow on specially designed bikes with super wide tires. Rushmore Mountain Sports grooms a fat bike trail just outside of Spearfish; gear can be rented there throughout the year, or at several places in Rapid City (try Acme Bicycles, for one).

4. You’ll visit one of the world’s great music museums. 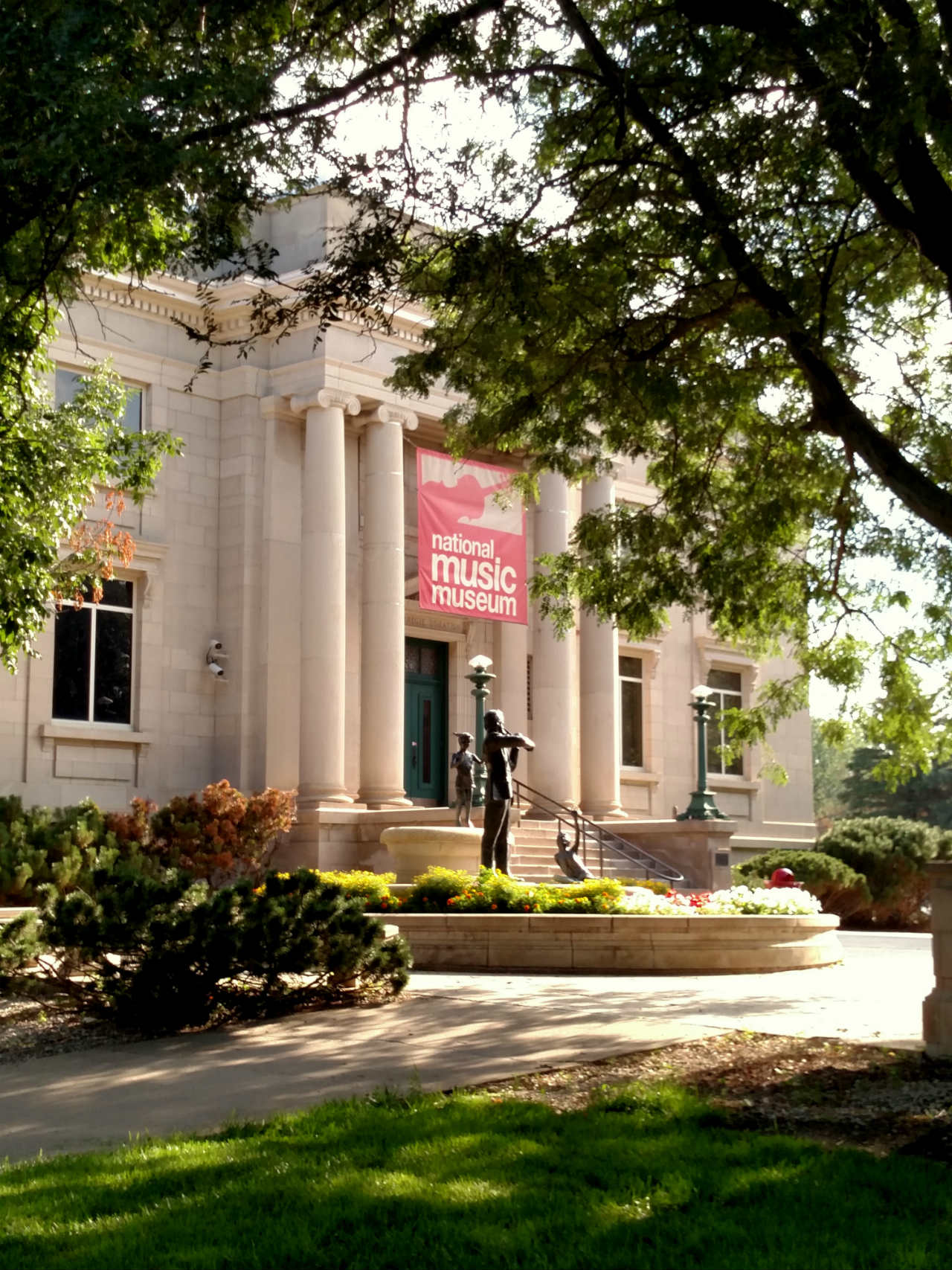 Fact: In a South Dakota prairie town of about 10,000, there’s a “musical Smithsonian,” home to one of the largest and most important collections of historical instruments in the world.

The National Music Museum, set in an old Carnegie library building on the campus of Vermillion’s University of South Dakota, houses instruments that span all cultures and musical periods, so allow 2-3 hours for your visit. While you may go in thinking you’re only interested in seeing the Spanish guitar on which Bob Dylan composed some of his earliest songs, or the world’s oldest known surviving violoncello, crafted in 1545 and played by King Charles IX of France, you’ll likely end up fascinated by dozens of other treasures — from a rare Stradivarius violin, to saxophones crafted by the instrument’s inventor, Adolphe Sax, and the earliest French grand piano known to survive.

5. In the Badlands, you’ll discover exactly why they call it “magic hour.” 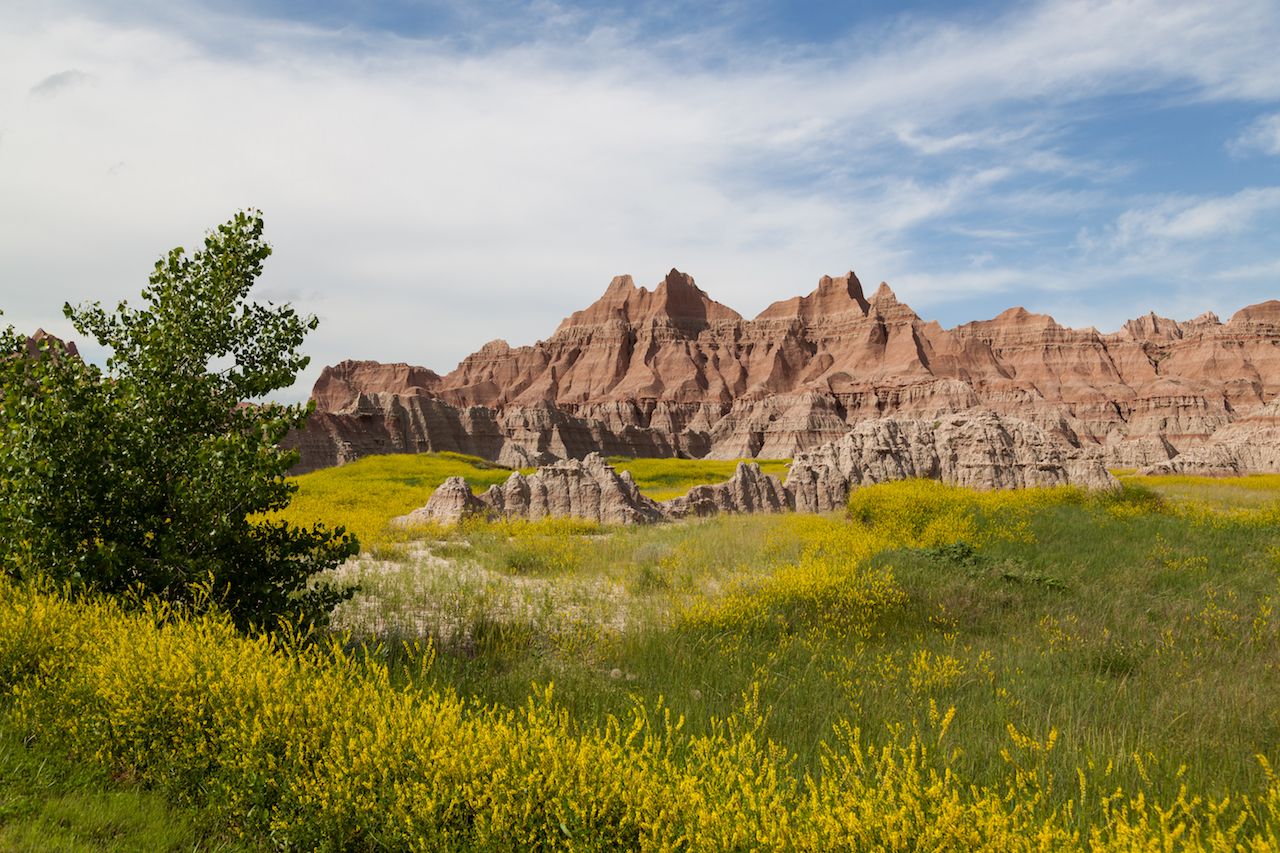 The Badlands of southwestern South Dakota are unreal at any time of day, but if you’ve brought your camera, there’s nothing like the “magic hours” surrounding sunrise and sunset for taking great photos. The subtle shades of red, yellow, and sienna that clothe the pinnacles and buttes become richer and deeper, and dramatic shadows play across the spires that rise toward the horizon. If you can catch a full moon rising or setting in this “blue light,” it’ll likely be the best shot you capture all year.

6. Your most memorable experiences will involve bison and a bunch of cowboys and cowgirls. 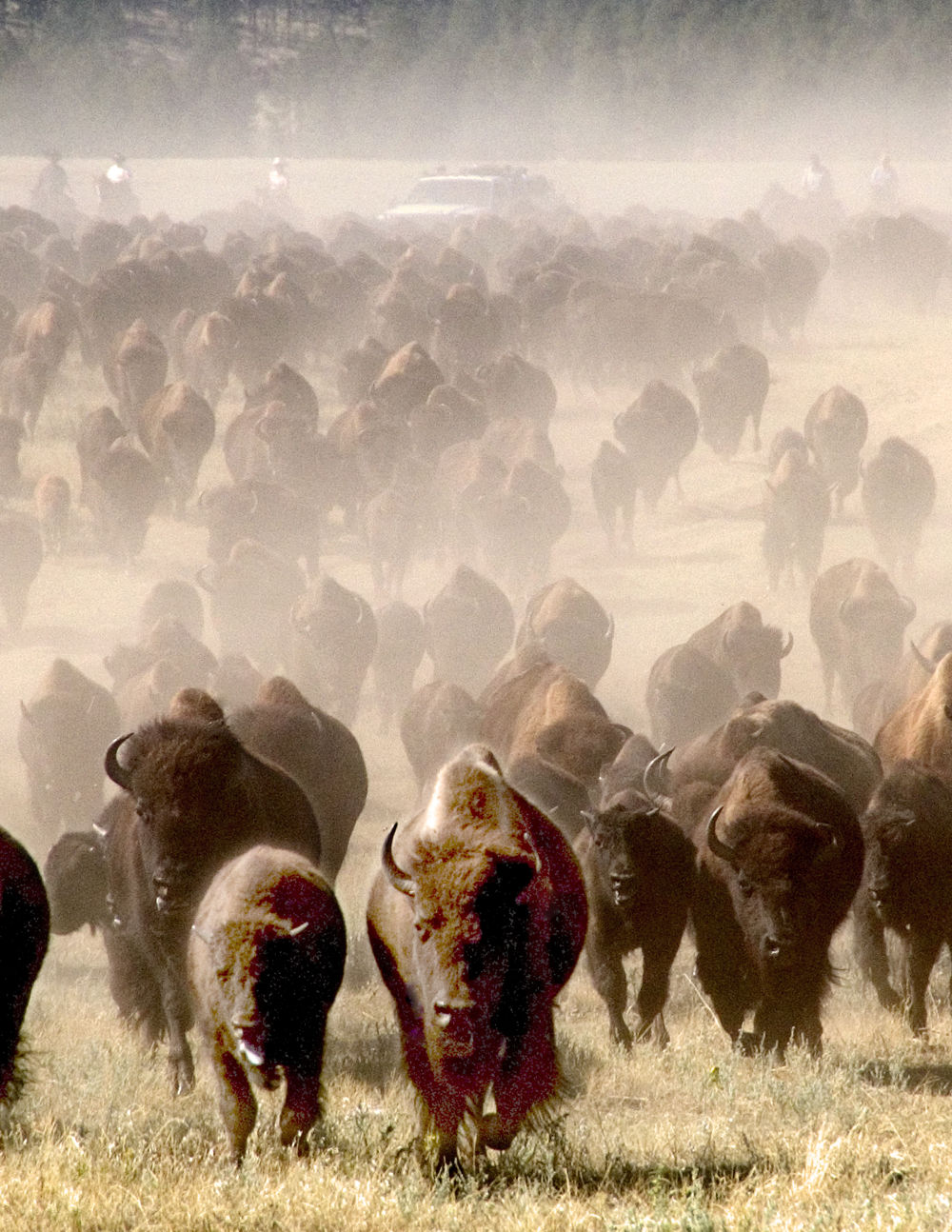 Hosted by 200+ ranches and several public parks, in total more than 40,000 bison roam South Dakota grasslands. That’s more bison than in any other state. Every September, Custer State Park hosts its Buffalo Roundup. This weekend event opens with the earth quivering under your feet as cowboys, cowgirls, and park crew saddle up and herd the free-roaming bison into the corral. The 50th anniversary roundup in 2015 saw more than 20,000 spectators, and there were pancake breakfasts, live music, and local art and crafts for sale.

If you’re into buffalo jerky, burgers, or steaks, you’re in the right place. Recommended is Murphy’s Pub & Grill in Rapid City for their Buffalo Meatloaf (you should probably order the fried pickles, too).

7. You’ll have a chance to attend some of the biggest and best festivals in the country.

For ten days in early August, more than half a million gather for the Sturgis Motorcycle Rally. Outside of this massive event, from powwows and rodeos to centennial celebrations and summer arts festivals, there’s always something going on in South Dakota.

Check out Rapid City’s Thursday Summer Nights, when downtown streets are closed to motorized traffic to make room for bands, beer, and killer local grub. And visit the city’s Art Alley, where emerging bands, artisans, and the occasional street performer gather crowds in the warm months. Or catch a performance at Black Hills Playhouse, The Potter Family Theatre, or the Firehouse Brewing Theatre (housed at South Dakota’s oldest craft brewery).

Our ocean of grass is often overlooked and undervalued, but there’s no better place to learn about the relationship between our food demands and the sustainability of the socio-ecological landscape than in South Dakota — a state vital to both our national food industry and our grassland ecosystems.

The more you learn about the prairie — its fortitude, perseverance, and resilience — the more fascinating it becomes. Despite getting less than 17 inches of annual rainfall, these lands provide fodder for more than 3 million cattle, not to mention horses, sheep, and countless wildlife like the long-billed curlew, burrowing owl, swift fox, deer, and pheasant.

At restaurants across the state, you’ll be served dishes featuring products that are often sourced right down the road, from a local farm or ranch. For a more hands-on experience, visit Rock Hills Ranch and eat Echinacea fresh out of the dirt, milk a cow, gather chicken eggs, rope a steer, scare out a pheasant, jump from hay bales — do it all. You might just gain a whole new respect for the grasslands.

This post is proudly produced in partnership with Travel South Dakota.
Tagged
Trip Planning South Dakota, United States
What did you think of this story?
Meh
Good
Awesome