The sound of trickling water was constant and therapeutic, like a nightstand’s white noise generator. But for the school of fish gathered underneath the bilge pump of the ship, the drip-drip-drip was a dinner bell: The kitchen window was directly above it, and the chef had been tossing out scraps all day in preparation for dinner that night.

It was day one of five of my tour of the Galápagos Islands, and I had just boarded the ship. Ever gregarious, I went in search of new friends. A kind-looking older gentleman was taking in the moment above the port-side railing. He looked the sort who would appreciate a joke. I sauntered up alongside the rail with what, in my mind, was a fantastic suggestion: “I want to do a cannonball right into the middle of those fish. Wouldn’t that be hilarious?”

Without missing a beat, he responded in a grandfatherly tone: “Yes, it would. Those are pufferfish.” He then looked my way, a nearly imperceptible smirk peeking through his beard. Pufferfish inflate their bodies into floating spike balls when disturbed, not the type of aquatic defense system you want to fling your nearly naked body against. I backed off my once-brilliant punchline.

Such is the extent of my ability to identify sealife on a whim. I’m keen on distinguishing differences between, say, dolphins and sea urchins (That one’s an invertebrate! It hurts when you touch it!), but otherwise I’m pretty useless without a guidebook or visual chart. I’m always ready to learn, though, and my trip with Adventure Center presented a fine opportunity to educate myself on the life that transpires around water in the Galápagos Islands. Lacking an underwater housing for my camera, I settled for above-water shots of the wildlife there that depends on the sea and its influence for its sustenance. 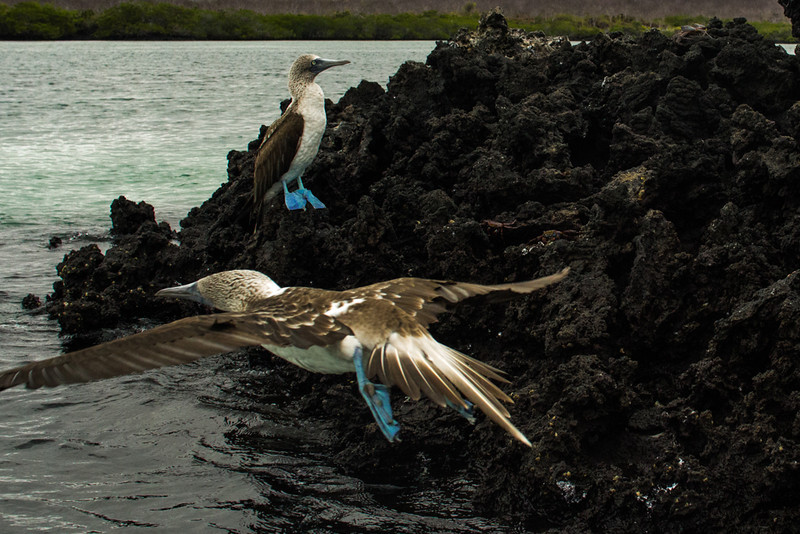 We never happened upon a colony of blue-footed boobies, but still had a few chance encounters with a handful on one overcast morning. They were much larger—and more graceful—than I had anticipated. I wonder if my opinion would change if I had seen their goofy-looking mating ritual. 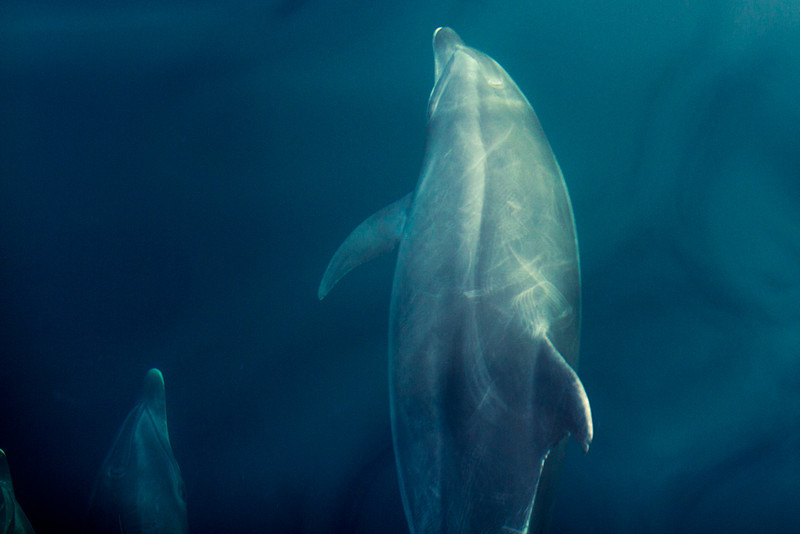 A pod of dolphins crosses our bow and alters course to play alongside our vessel for a few minutes. 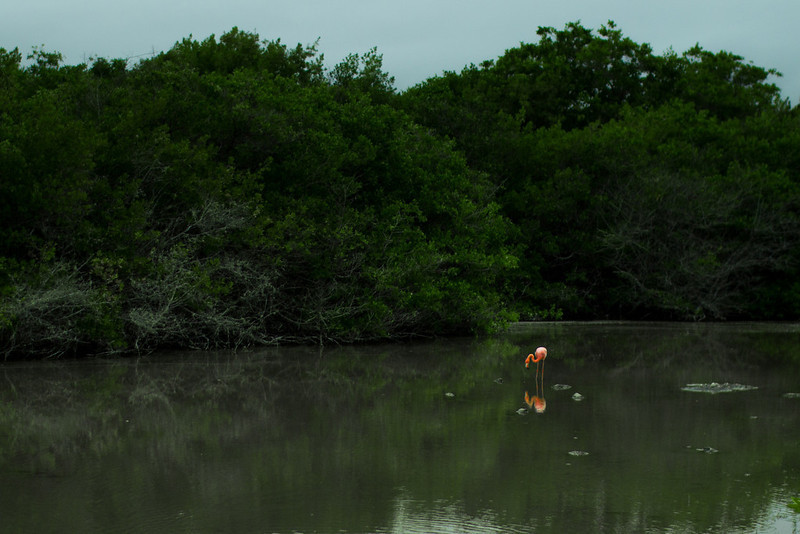 A visit to the humedales, or wetlands, on Isabela offered us a great chance to see flamingos in the wild. Contrary to popular belief, their feathers aren't colored to begin with—but they become pink or orange due to the large amounts of carotenoids found in their diet of shellfish. 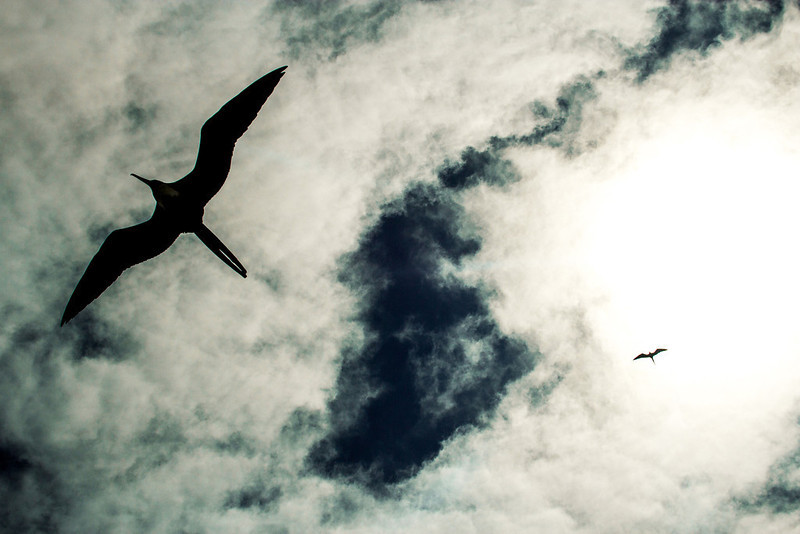 These frigate birds had caught wind of our chef's antics and tailed us between islands, hoping to scavenge a few scraps from the kitchen. While they waited, though, they sailed above the ship without flapping their wings—something I'd seen high in the mountains with thermal currents, but never at sea level, and never at twenty knots. 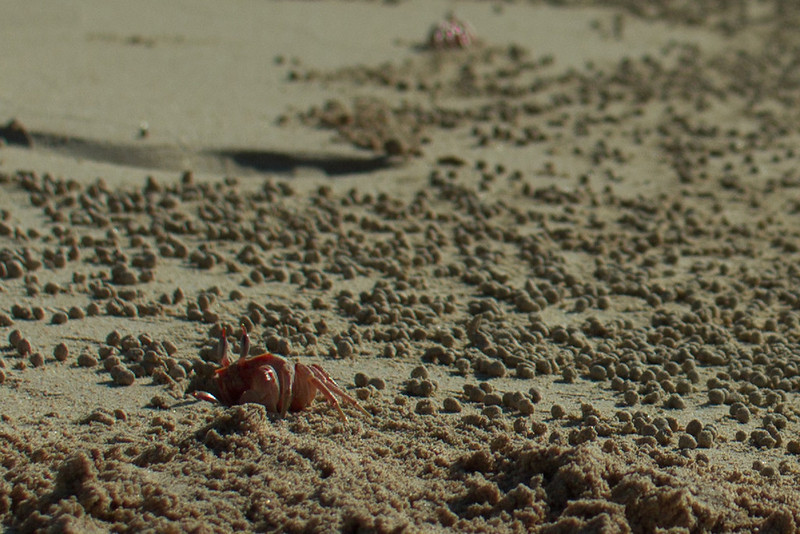 I shot this photo essay with a 30mm fixed lens…wide-angle and telephoto shots were not an option for me, and sneaking up on the elusive ghost crab was not an easy task. Despite being far away, motionless, and downwind (crabs can smell…who knew?), this was the closest I could get to one before it scampered back into its hole. 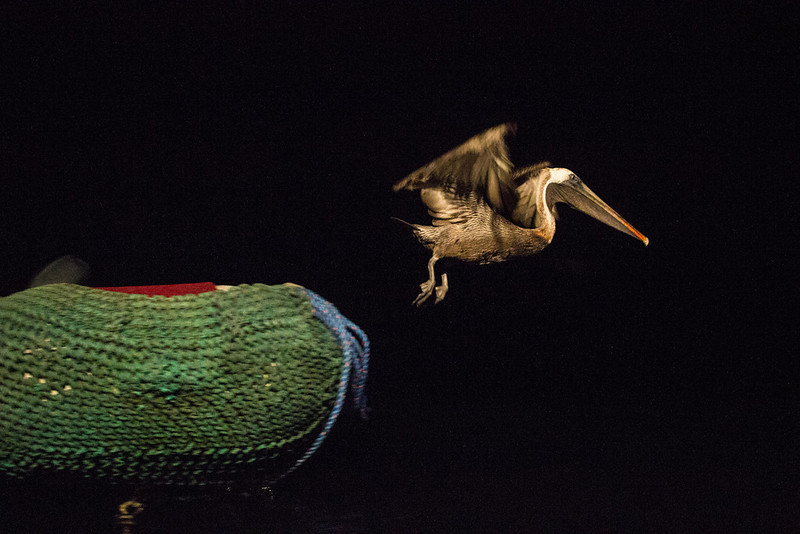 One night after dinner, the captain flipped on the aft spotlight over the ship's dinghy, and a pelican saw a prime opportunity for some night fishing. He and I spent the better part of an hour hunting—he for dinner, and me for this shot. 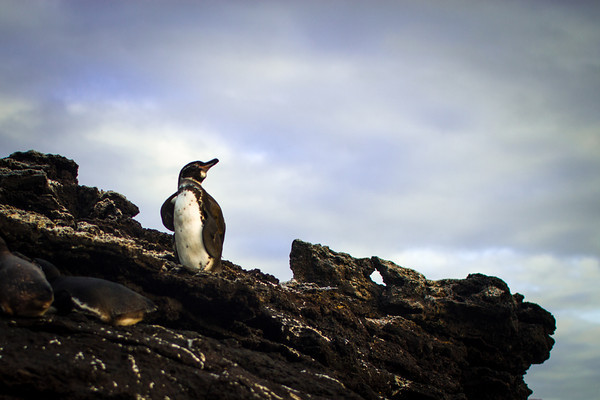 The Galápagos penguins aren't the only non-Antarctic penguins in the world, but they are the only species found north of the equator. Unfortunately, their presence has been steadily dwindling since the middle of the 20th century, and it's thought there are only a few thousand left in the wild. Hopefully this penguin's defiant stance is more prophetic than not. 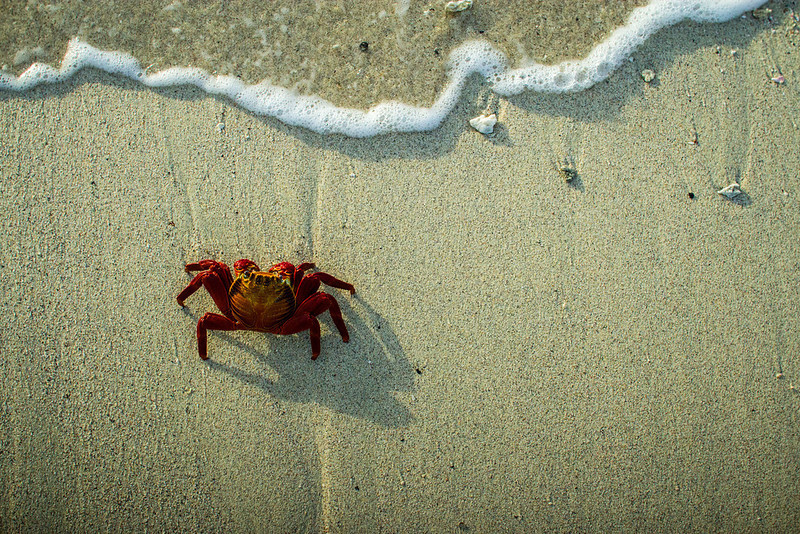 Despite having a rugged exoskeleton and a great natural defense, the Sally Lightfoots were noticeably skittish. I was surprised that this one let me approach so closely. This is probably my favorite shot of my entire trip, as it incorporates all of my favorite practices from my designer-influenced background: tons of negative space, great texture, and organic lines breaking rigid grids. 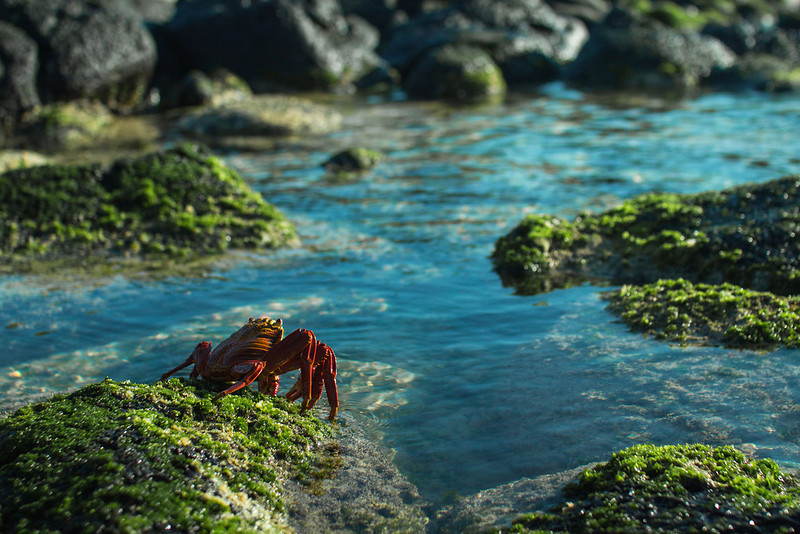 The Sally Lightfoot was one of my favorite subjects in the Galápagos, mostly because of their unique look and their brilliant red exoskeleton, which was a visual punch forward from a backdrop of greens and blues. The "lightfoot" in their name derives from their perceived ability to walk on water when jumping from rock to rock in the shallow tidal pools. 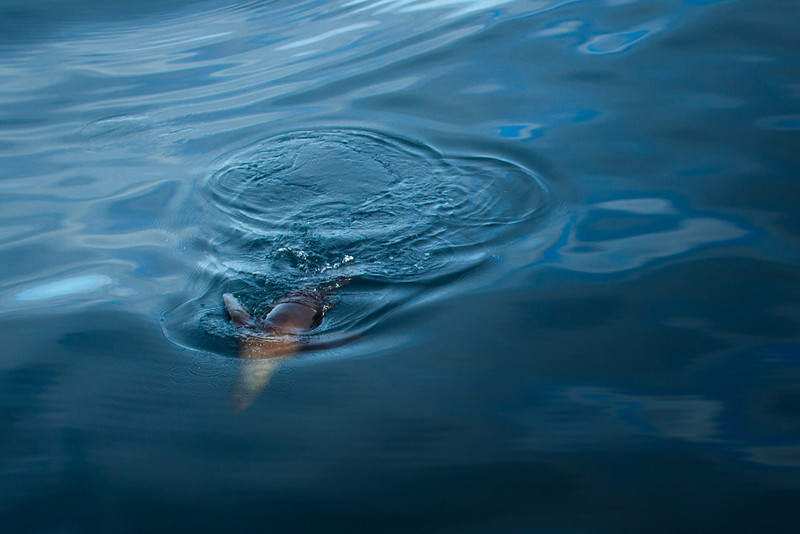 Our final morning aboard the ship was lazy and relaxing, so I wandered over to the ship's bow to look for trouble. A sea lion was out doing its normal routine, and I arrived just in time to catch it coming up for air. 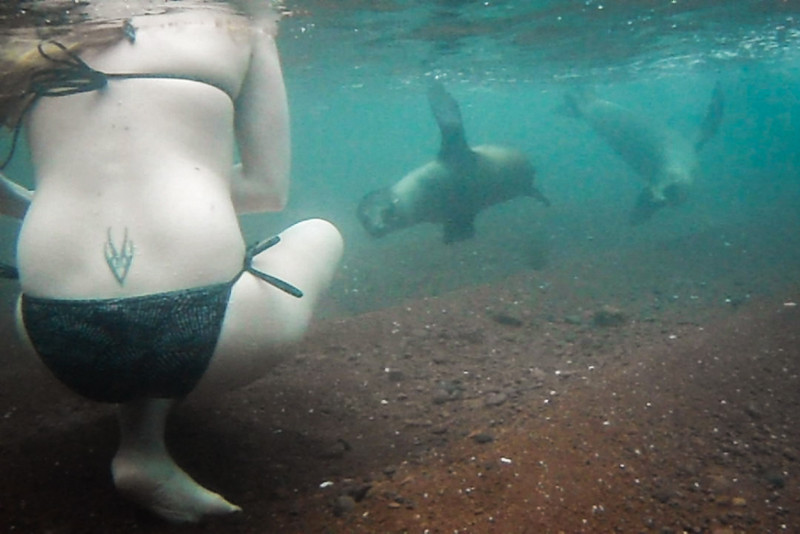 One of the highlights of the trip—and the point at which I felt it complete—was during our second snorkeling excursion, when a pair of sea lion pups followed us all the way back to our rendezvous point. I've never encountered animals in the wild that were so unabashedly curious and unafraid of humans. This likely topped my charts as "travel experience of the year," holding its spot even after the moment I gave chase to a reef shark the following day. 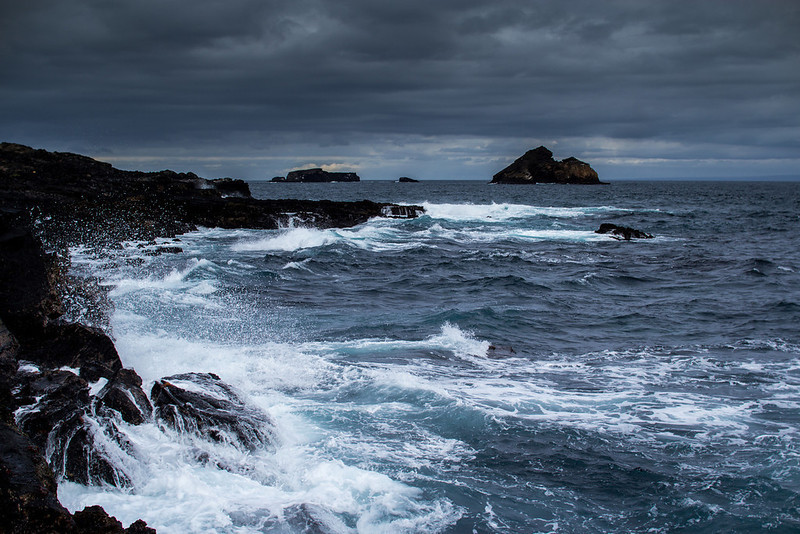 I grew up with a fear of the ocean and waves, and only in the last few years have I begun dismantling that fear via surfing and snorkeling as often as possible. Still, images of sharp coastlines and rugged waves sometimes keep me from sleeping. I take pictures of moments like this so I can look at them more, hopefully to the point where their shock is dulled.

Tagged
Ecuador Adventure Center: Travelers-in-Residence
What did you think of this story?
Meh
Good
Awesome
✖
travelstoke
Download the mobile app
stoked by