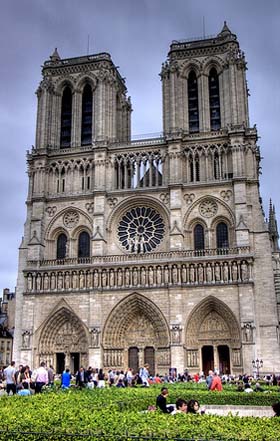 1. The Crypt at Notre Dame

Standing on the plaza of Notre Dame, surrounded by fellow tourists gawking up at the towers and snapping posed pictures on the small plinths lining the square, I was more focused on what was beneath my feet.

In the 1960s, the excavations for the wide plaza in front of Notre Dame Cathedral unearthed artifacts and buildings from hundreds and thousands of years ago. Walking beneath the pavement into the cool, dark rooms, I was walking into Paris as it was when it was first inhabited. Well, not quite first inhabited, since people were living along the banks of the Seine on the Ile de la Cite in the Paleolithic Era, 500,000+ years ago.

What I could see now, as I wandered through the exhibits — thankfully in both French and English — were the remains of the Romans who had lived in Lutèce, the town that predated Paris. Along with the illuminated stone arches and walls of the ancient Romans are re-creations of Parisii, the Celtic tribe that settled there over 2000 years ago.

Realizing the civilizations that had built Paris, so far removed from the Eiffel Tower or the Arc de Triomphe, I could feel the weight of the history as heavy as the cathedral that was above my head.

I wasn’t quite sure what to expect, but I have an overwhelming interest in things that are a little bit weird, so there I was at the sewer museum.

I walked down a spiral staircase from the unassuming blue and white kiosk near the Pont de l’Alma on the Left Bank and into the museum. Or rather, into the sewer itself. Water dripped from the ceilings and the brochure/map of the museum from the ticket desk warned visitors not to touch anything and to make sure to wash their hands after they left. I had never been warned of that in a museum before. 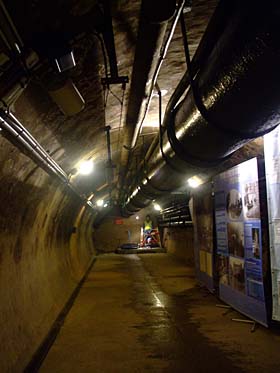 It was these sewers that had inspired Victor Hugo in Les Miserables to write a veritable treatise on the underground pipes:

The sewer is the conscience of the city. Everything there converges and confronts everything else. In that livid spot there are shades, but there are no longer any secrets. Each thing bears its true form, or at least, its definitive form.

Napoleon Bonaparte’s reign saw the implementation of covered sewers; nowadays the sewage system is 1,300+ miles. The long galleries feature exhibits of sewer maintenance equipment, uniforms, and history. It wasn’t until I was standing above the rushing water of a feeder sewer that there was a noticeable odor. Not overly foul, but enough to keep me moving on.

I stood in line for the catacombs for an hour and a half on a cloudy Saturday morning, spending most of that time lamenting the fact that I’d been too lazy to get there early to beat the line. It was so long; the museum can only accommodate 200 people at a time.

During the 1700s, bodies in Paris were buried near Les Halles until bones started popping into people’s wine cellars. This not being ideal, they were moved at night under the watchful eyes of priests. The bones were interred beneath the city.

Deep underground, around 7 or 8 stories, I couldn’t see anyone in front of or behind me in the long, narrow, and dimly lit tunnel. I paused for a moment, telling myself to get a grip; there was no way out except to go forward, and now — in a country where I didn’t speak the language — was not the time to develop claustrophobia. I pressed on.

I was not the first visitor by far. Not long after the bones were moved, people came to tour the tunnels. A line of black traced the ceiling, residue from the candles that had been used to light the way. 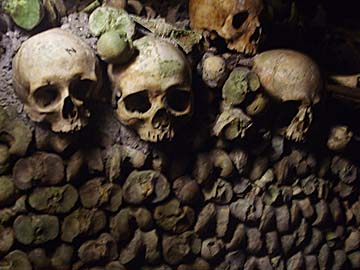 “Arrete! C’est ici l’empire de la mort.” Stop! This is the empire of death. The sign over the entrance to the tombs. I walked inside and lining the walls were piles upon piles of bones, artistically arranged with stacks of femurs and humeri divided by rows of skulls. Were the dead being honored here? Or was it just a tourist diversion? I couldn’t decide. Perhaps it could be both.

I thought of how easy it would be to slip a bone into my purse, a sneaky and macabre souvenir. I was glad that I chose to respect the dead since at the exit there is a guard who inspected my bag. A small pile of bones, including one skull, on a table nearby showed that others hadn’t been so considerate.

Like being below the surface? Here are more posts that explore the sub-terrain:

Tagged
Trip Planning Paris, France
What did you think of this story?
Meh
Good
Awesome