UNTIL THE MOMENT something happened that shouldn’t have, our fourth day traveling by open-air boat up Burma’s Chindwin River had simply been uncomfortable.

On the overcrowded craft, I sat squashed next to my husband, Bernard, my t-shirt no protection from the pre-dawn chill. Around me, 80 Burmese villagers flung towels and spare longyis over themselves for warmth. So thick was the fog that, even had it been daylight, we couldn’t have seen the nearby shore.

On the prow, a thin youth sounded the placid water with a long bamboo pole. Left and right he probed, seeking viable channels among submerged sandbanks, transmitting his findings by hand signal to the captain behind him.

Two hours into the journey, the boat shuddered to a halt. As we sat in the dark, the sound of the engine straining in reverse reverberated off the invisible shore. And then there was a loud pop.

Our guide, Saw, squatted on the deck next to me. “Stuck,” he said, not a man to waste words. “Prop shaft broken. But? No problem. New boat will come.”

How a new boat would hear we needed help was a mystery to me. I’d seen no one in this remote area of western Burma with a cell phone — irrelevant, because there was no service. I’d tried.

With no other options, I looked to our fellow passengers. They weren’t making a fuss. Neither would I. 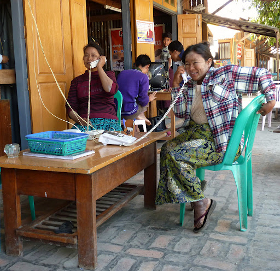 No cell phones along the Chindwin

BEING ON THE RIVER wasn’t our plan when we decided to get off the backpacker circuit in Burma. We were supposed to go by car, exploring the unvisited backroads of northwest Sagaing Region by day, staying near the Chindwin each night.

Our first day’s drive took us from Monywa to the former British teak depot of Kalewa. On the map it looked simple, a dirt road used mainly by a dozen shared taxis, a few buses, and local ox carts, crossing a ripple of high ridges along the eastern perimeter of Alaungdaw Kathapa National Park.

“Twelve,” he grunted, chewing the packet of kun-ya (areca nut, tobacco juice, and slaked lime wrapped in betel leaf) stuffed in his cheek and sending a stream of red spittle out the window.

“It’s barely a hundred miles. How is that possible?

Twelve hours later, after nursing the van’s geriatric suspension through bucket-sized potholes, inching over steep hills, and eating taxi dust, we reached Kalewa. The place was crowded with people shopping at stalls packed with housewares and produce, customers at ease in teashops, parents shepherding children home from school.

Our sky-blue concrete guesthouse stood high above the river, now twenty feet lower than during the summer rainy season. Within minutes of arriving, we were shown rooms and offered our pick. Mindful of the layer of dust coating our skin, we chose one with its own bath trough, the last such luxury on the Chindwin.

Guesthouses: What to expect 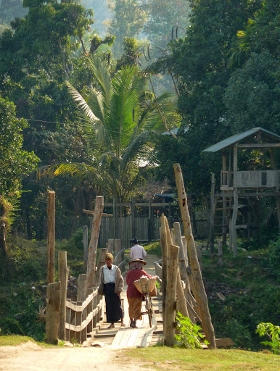 BACK OUTSIDE, we found Saw confronted by three policemen with holstered guns on the hip, all jabbing at copies of our passports and permits. Saw stood in what I came to call “negotiating pose”: arms crossed, face impassive, wild, wavy black hair escaping from his headband. He looked tense and avoided eye contact with me, which I took as a sign to stay away.

When Saw finished with the police, we beckoned him over for the story.

“Not used to foreigners,” he said. “Nervous. Say we must go.”

“So, what do we do?” The thought of getting back in the van was depressing.

“Not leave. Can stay. Permits say so!”

Now seemed the time to broach what Bernard and I had started discussing while Saw was in the police standoff.

“If we were to switch to the river for the rest of the trip, would that cause permit problems?”

“Permits for village. Use car or boat … OK.”

“What about the boats. Do we need to reserve in advance?”

“Buy every day, each village. Easy.”

Switching to the river was sounding too simple.

“And the van and driver. What will they do if we continue from here on the river?”

“They drive back Yangon. Also OK.”

Which is how we wound up hopping river boats for 300 miles, till the Chindwin got so shallow we couldn’t go any further.

Next morning, we were at the “dock” by 8:30. There were passengers, vendors, and porters swarming among an assortment of boats painted lime and turquoise with red trim, each nosed into the broad sandbank. Finding ours, we followed pigs in handmade bamboo crates, furniture, sacks of rice up the one-plank gangway. Families piled in dragging parcels and babies. A monk sat amidst barrels of oil. Snacks were hawked from skiffs and by deck vendors.

And then, impelled by an ear-splitting horn, vendors scrambled to land, skiffs pushed back, and we were away.

River boats: What to expect 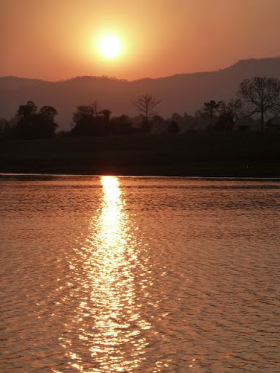 Sunset on the river

THE RIVER WAS ITS OWN SORT of highway, accommodating everything from one-man fishing canoes to mammoth bamboo rafts floating teak logs downstream. Our boat stopped often to pick up or drop passengers on the banks below their home. None of these stops were set, nor could we disembark. Each brought a chance to observe river life up close, like peering in a neighbor’s window from the sidewalk.

The Chindwin is narrow enough that you can see what’s happening on both banks from midstream. We passed fields of sunflowers and corn tended by farmers in conical bamboo hats. Naked kids splashed at the river’s edge next to women doing laundry. A farmer swam with his zebu, and then the two of them clambered up the steep sandy bank. White stupas with gold spires poked through the palms.

For us, life simplified. There was “river time,” spent visiting, reading, and watching the scenery. And there was “shore time,” finding the guesthouse with its stall-sized rooms, choosing a teashop for cold beer and peanuts, roaming village streets.

In Mawleik, our first stop, Saw was again confronted by the local police, an authoritarian welcome which repeated itself in every village. When he finished persuading them our permits were valid, I asked if he needed to come with if we went for a village wander.

“Where will we find you when we get back?”

“I find you,” he said, and gave a rare chuckle. “You only white people here. Everyone know where you are!”

This was how it went. If we liked a village, or the next day’s boat schedule didn’t suit us, we’d stay another night. Evenings, we’d pick a restaurant for a dinner of fried rice, noodle soup, or — my favorite — Burmese curry.

Burmese curry has nothing to do with Indian curry. It’s served everywhere and works like this: 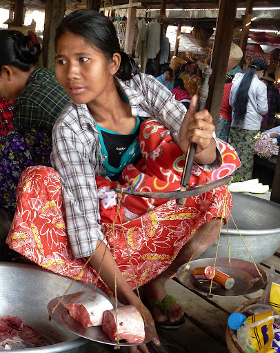 Breakfast was strong black tea with sweetened condensed milk, plus freshly fried doughnut sticks with a few spoonfuls of lentils. I might go to the kitchen and gesture for fried eggs. At a street stand, we’d get cool rice noodles smothered with sauces, greens, and a chopped hardboiled egg, blended with chicken broth.

Street markets, the heart of each village, offered an astonishing variety of food: eggplants, bitter greens, immense gourds, onions, cauliflower, carrots, peppers, thumb-sized bananas, chicken, quail and duck eggs, slick silver river fish, brawny catfish, scrawny chickens, more beans than I knew existed. And rice, from premium at $2/kilo to the dregs for half that. Weighing was done with hand scales, the goods on one tray, D-cell batteries on the other.

As the only foreigners in villages where few spoke English, we were greeted with a wave and smile, but otherwise left alone.

I always headed for the local beauty salon, an indulgence I discovered in a Mawleik teashop, where the foot traffic to and from a curtained-off area had made me curious. The smell should have been a giveaway: the flowery scent of shampoo mixed with the acrid odor of bleaches and perms. Pulling back the drape patterned with cartoon ducks, I discovered a 5’x12’ alcove where a young woman was having her hair straightened while her boyfriend had his bleached. I gestured for a hair wash and waited my turn.

While a beauty shop’s smell is instantly recognizable, what happens in Burmese salons is unique. It took only once for me to work this into my village-visit routine. That I could do so while supporting women entrepreneurs and getting my long hair cleaned was an added bonus.

At a Burmese hair salon

LIFE ON THE RIVER was good. So good that on the day we got stuck, I didn’t care that we waited three hours for a boat, alerted by radio by our captain, to rescue us. I didn’t even care that it, too, got stuck…twice more, stretching a 12-hour day to 19.

But eventually the Chindwin got too shallow, and we had to fly from Khamti back to Mandalay. At the airport, I asked Saw, “When the water’s higher, is it possible to go further up?”

Tagged
Budget Travel Insider Guides Myanmar
What did you think of this story?
Meh
Good
Awesome

Why We Must End Human Safaris