I had never been sea kayaking before, but when I had the chance to explore this uninhabited coastal wilderness, I was immediately intrigued. Hinchinbrook Island is situated off the tropical coast of North Queensland and is Australia’s largest national park island and part of the Great Barrier Reef World Heritage Area.

For seven days I was in the hands of two amazing guides, James and Michelle from Coral Sea Kayaking, as we navigated around the island’s rugged headlands, camped on white sandy beaches, and marveled at the majesty of the soaring peaks of Mt. Bowen. Here’s what some of that looked like. 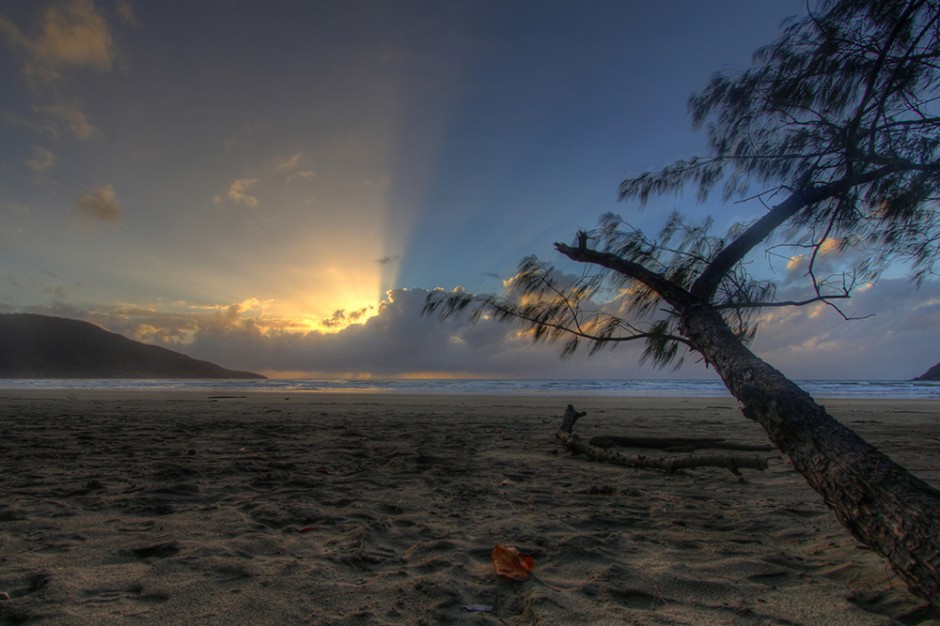 After crossing from the Australian mainland and paddling around Hinchinbrook’s most easterly point, we arrived at our first beach camp, the lovely little Zoe Bay. We pulled our kayaks high off the beach as the tide came all the way up to the tree line here, just meters from our camp. 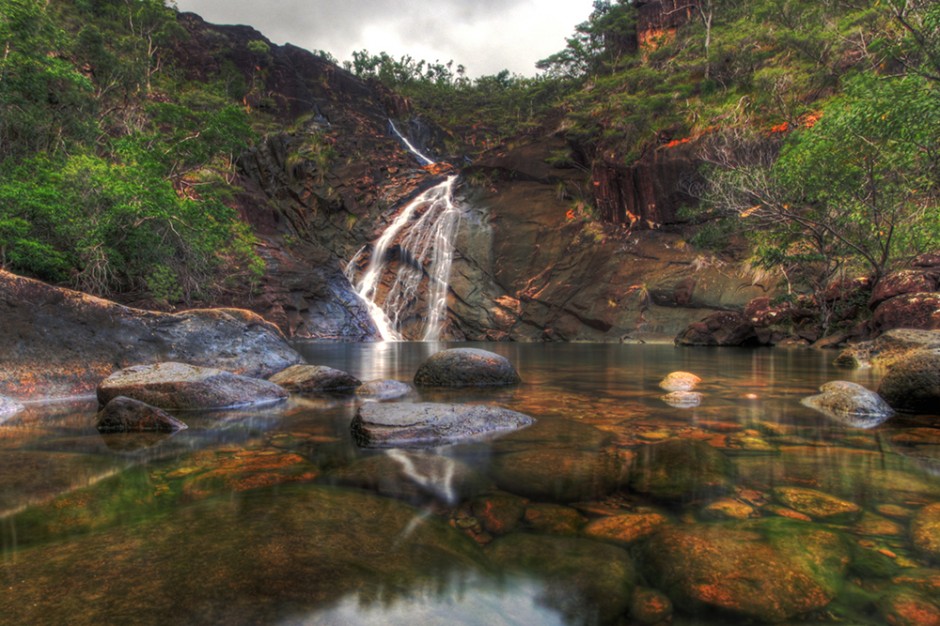 One of the perks to sharing the island with just a handful of hikers and the occasional kayaker was having places like this beautiful swimming hole all to ourselves. 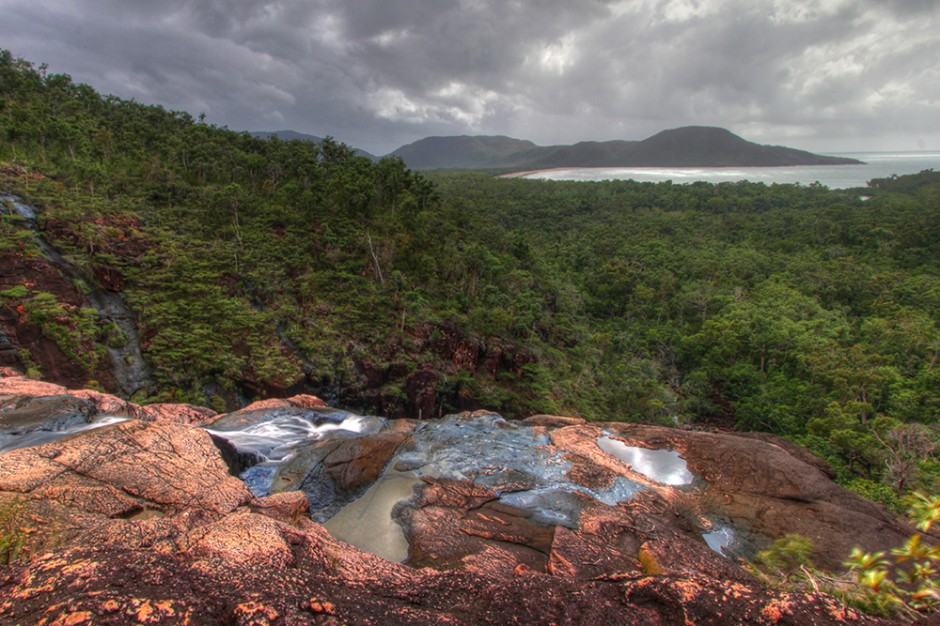 The trip had just begun and already I was overwhelmed by the beauty of this place. I had just enough time to scramble up to the top of the falls and catch this magnificent view before it was time to head back to camp to pack the kayaks as we continued on our way to explore more of the island. 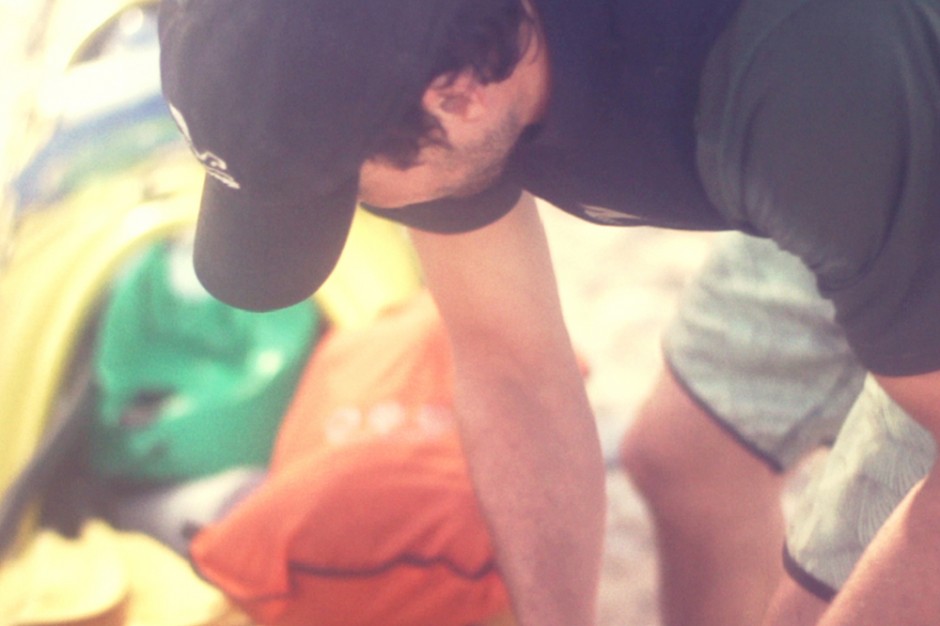 It’s amazing how much you can fit in a sea kayak. We had to carry everything we needed for 7 days, including food, tents, kitchen gear, personal belongs, water, and wine. Each day we would lay everything out and start packing the big items, and by the end we would be squeezing the smaller things into any remaining free pockets we could find. 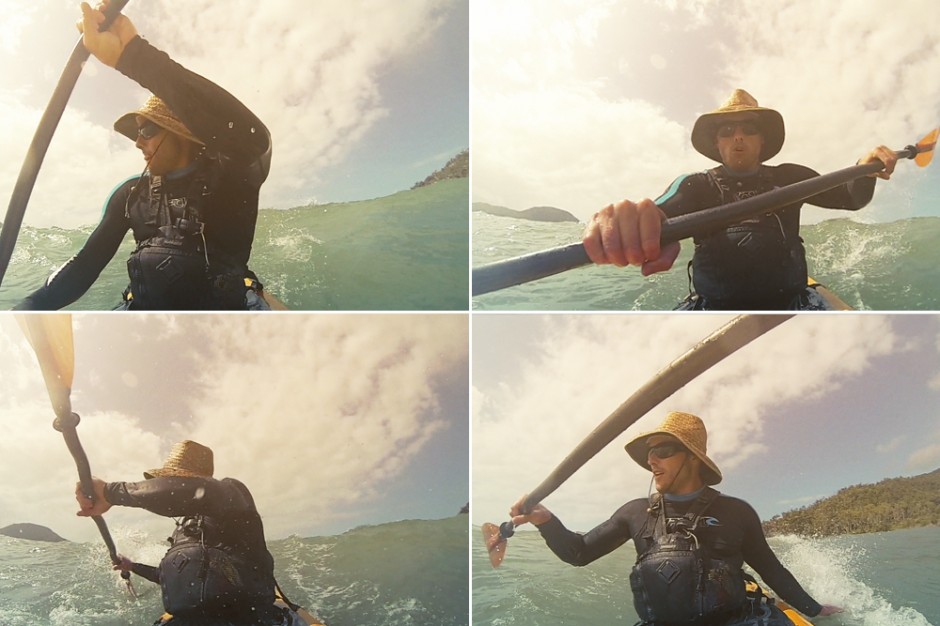 As we were leaving, James gave us a head start as he hung back to catch a few breaking waves coming into the bay. 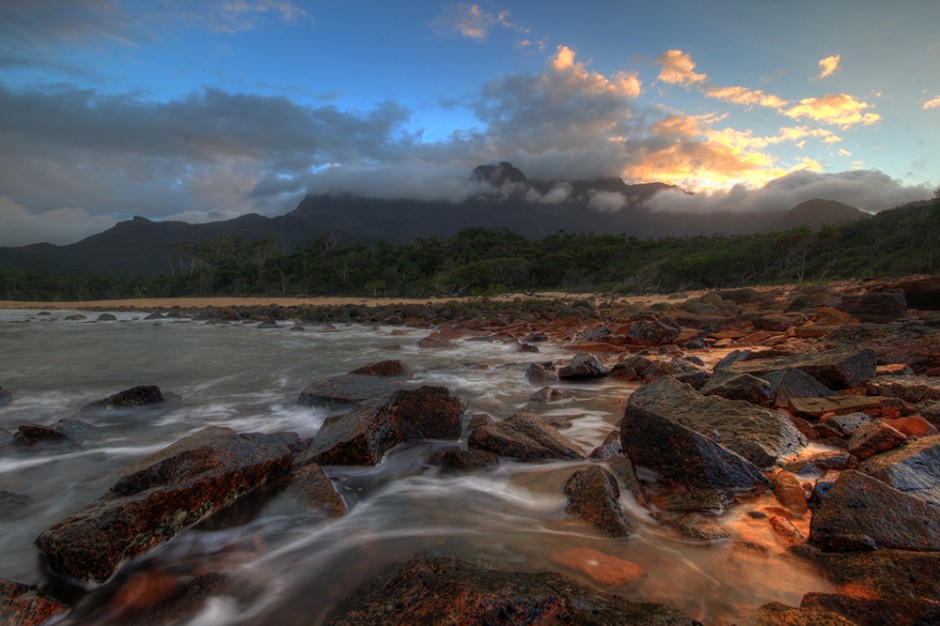 A few good hours of paddling around rocky headlands into Little Ramsey Bay and I was captivated by the cloud-shrouded Mt. Bowen rising 1121 meters above the ocean. 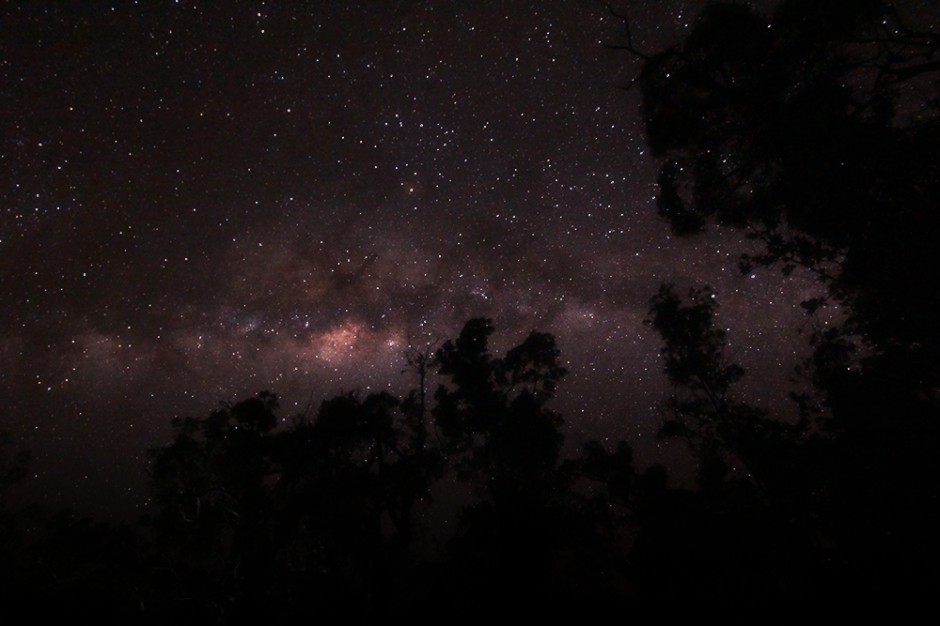 The stars shone brightly, but while my head was in the sky, my guides' were more focused on our feet, as the tide was attempting to breach our beach camp. 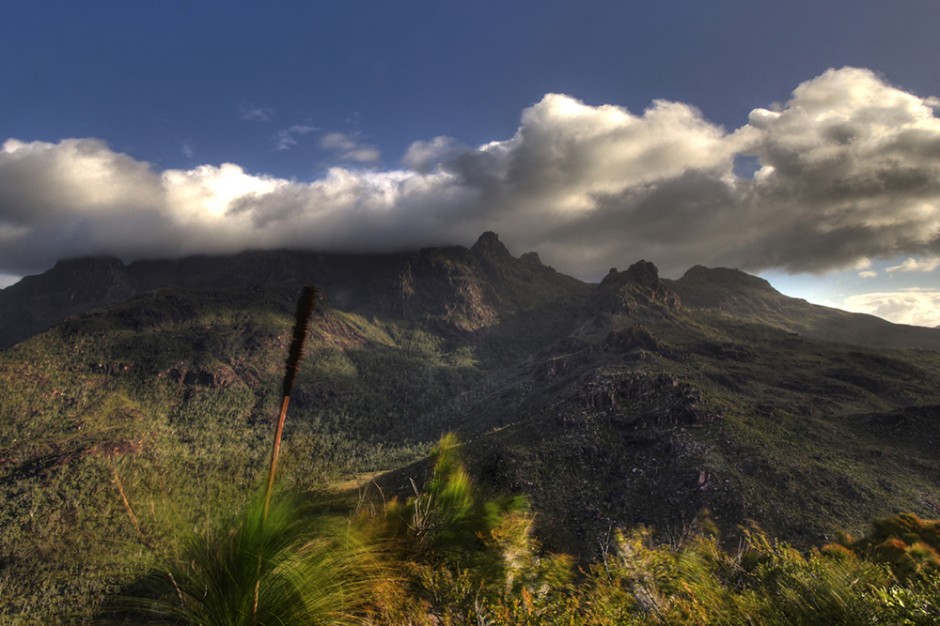 We paddled to Blacksand Beach and, after setting up camp, scrambled to the top of Nina Peak for a great view of Mt. Bowen. 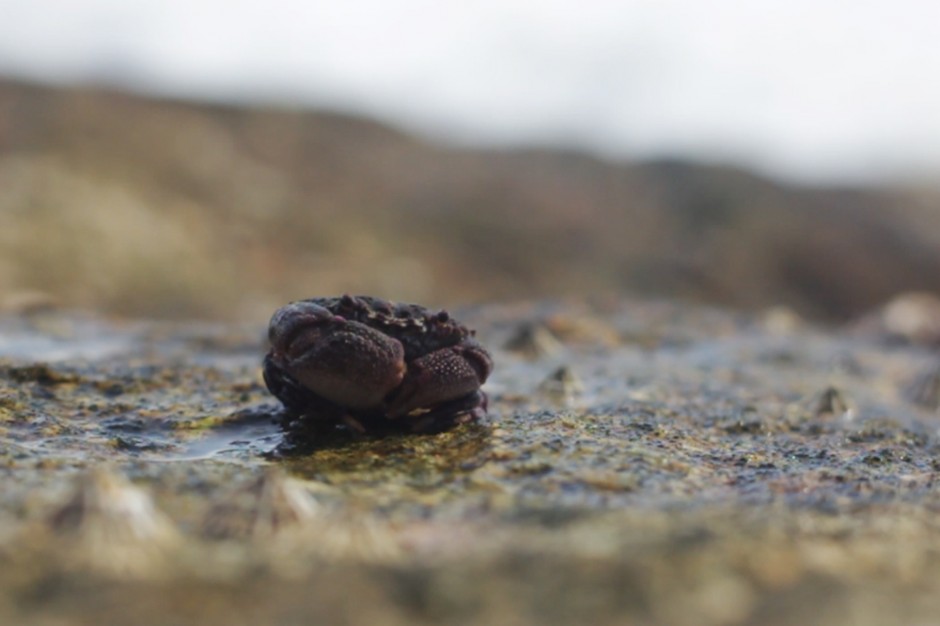 The rocky headlands were crowded with crabs, but trying to get close enough for a photo was a real challenge! Eventually I found this one that played dead and finally gave me the chance to get a picture. 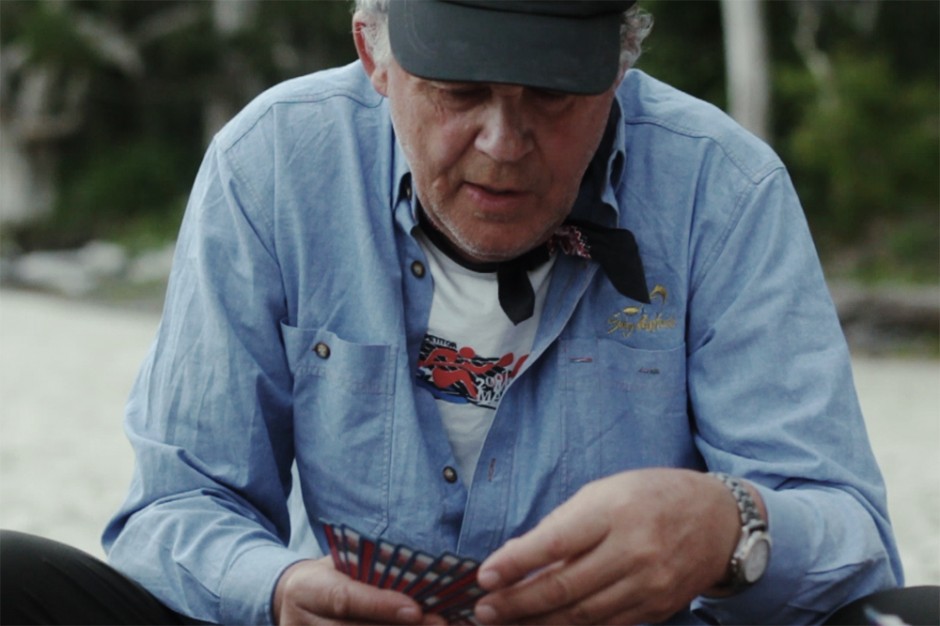 This is my fellow kayaker Hans, a man who has experienced many paddling adventures...and with adventure comes the appreciation for simple things, like enjoying the afternoon with good company and a deck of cards. 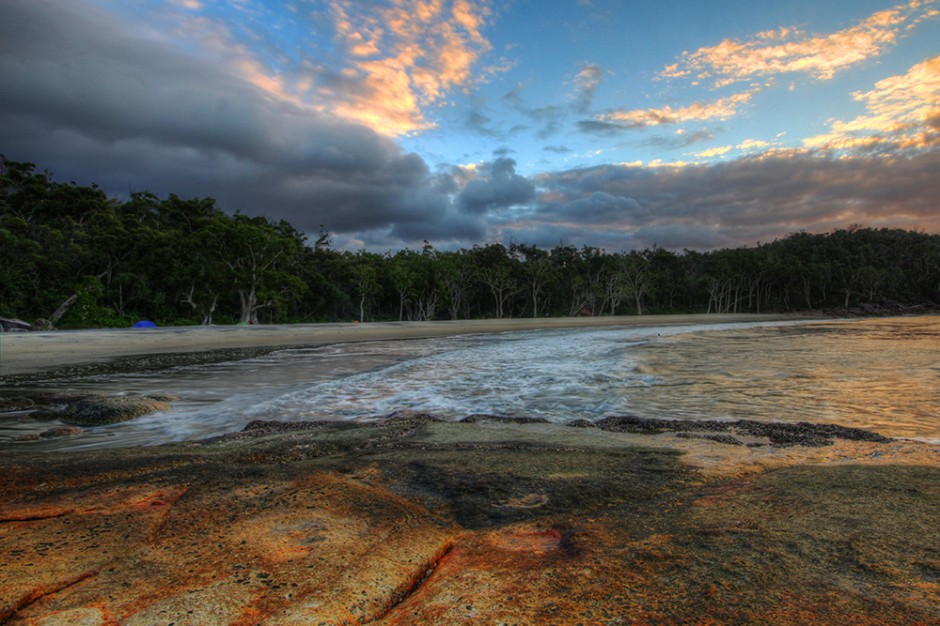 Catching the last light on Blacksand Beach before another night under the stars, rocked to sleep by the sound of crashing waves. 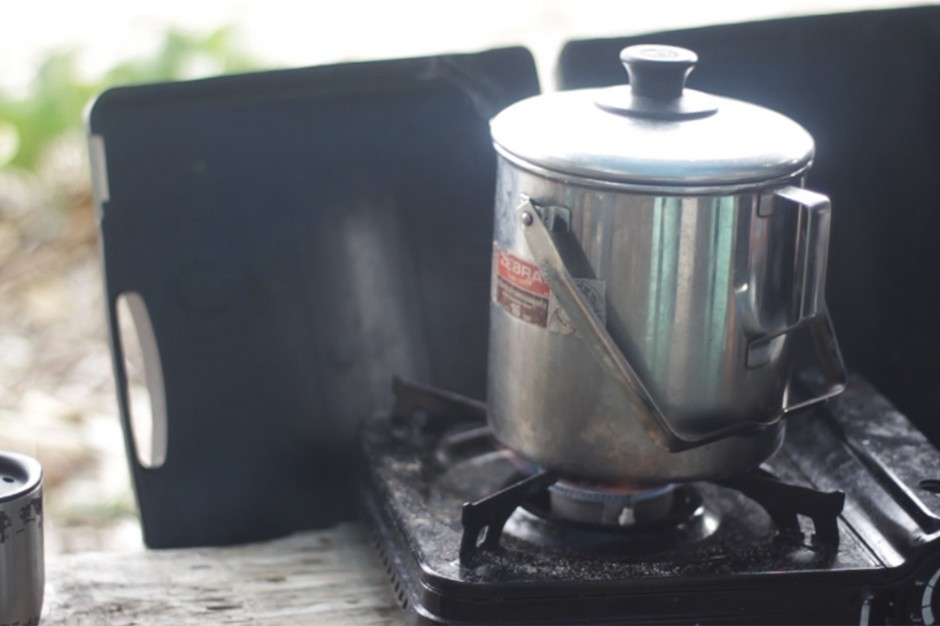 Boiling water for coffee as we prepared to embark on a tough day paddling. With high winds blowing in from the east, James openly described the weather conditions as "harrowing," yet we set out to cross the 8km stretch of Ramsey Bay and slingshot around Cape Sandwich to the shelter of our next camp. 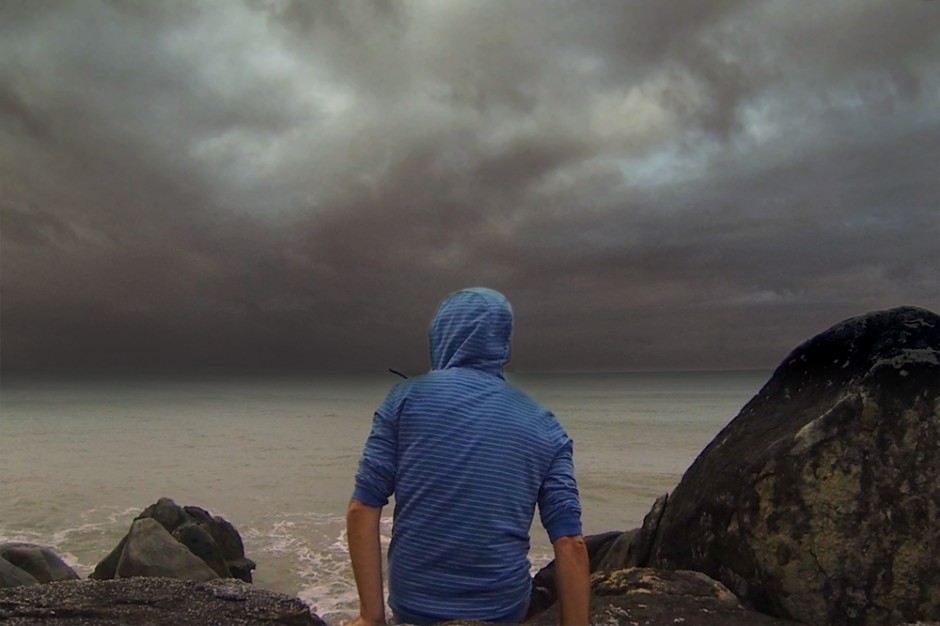 Taking some time out hoping for an improvement in the weather after being pushed to my limits. The "harrowing" 30-knot winds created a stir in the ocean that made it feel like kayaking through a washing machine. I came out second best when I was pitted against a rogue wave and capsized in rough open water. 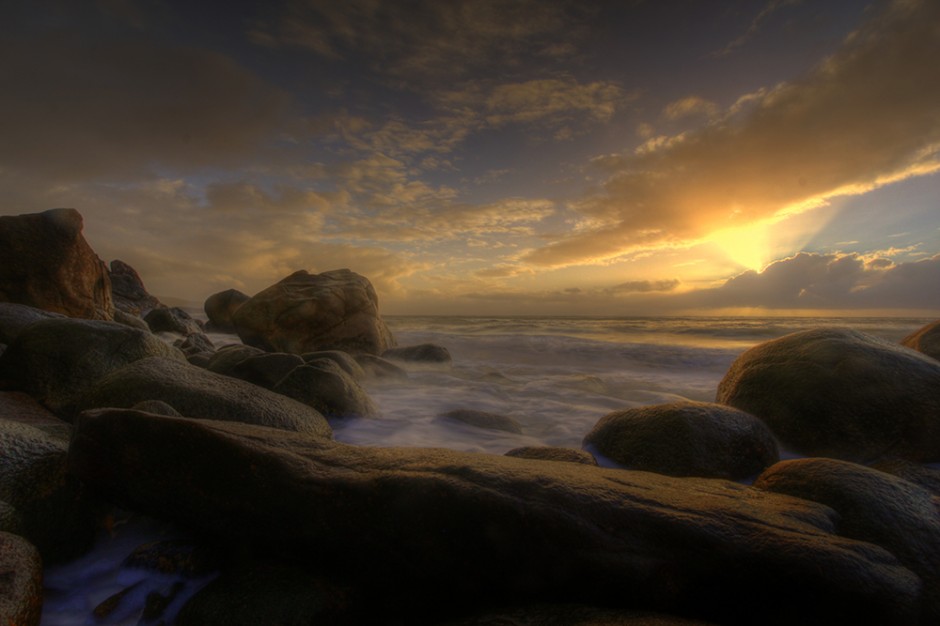 A magical end to what was otherwise a dark and gloomy day. This night's camp spot was appropriately named Sunset Beach, and we were all going to sleep well after a challenging day paddling around the cape. 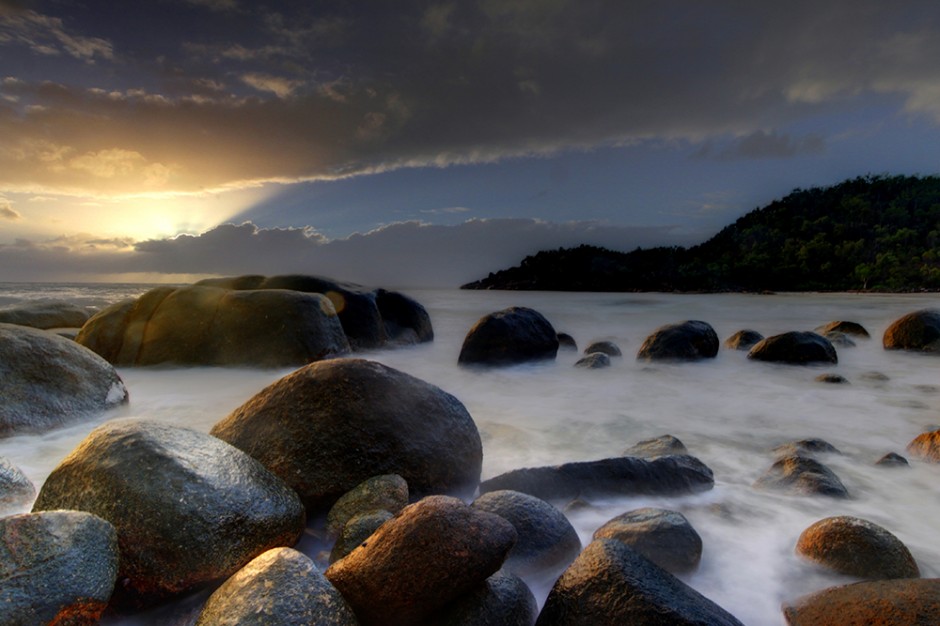 The rocks on this beach proved to be great props for my photos, and I couldn't resist the wonderful early morning light to catch a few more snaps of this pretty little place before we packed the kayaks and paddled away from Hinchinbrook Island for the last time. 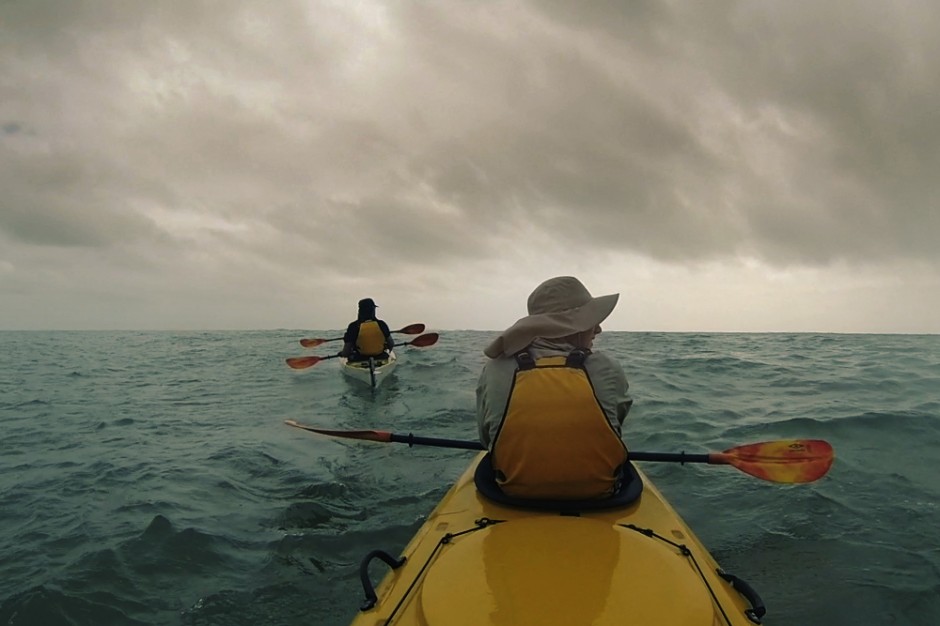 The skies continued to paint a dramatic picture as we spendtthe remaining two days island hopping to get back to the mainland. After already covering more than 50km over five days, this stretch of water was our biggest endurance test as we paddled with tired arms directly across 20km of open water to the next island. 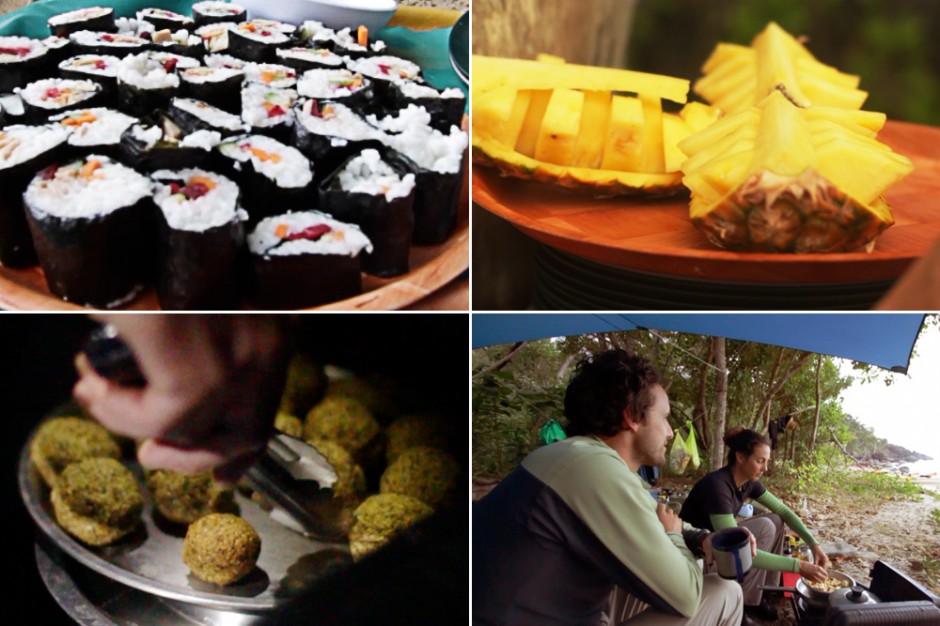 Cooking with James and Michelle

Just some of the amazing food James and Michelle put together for us. We had everything from sushi to curries, pasta, pancakes, and pizza! 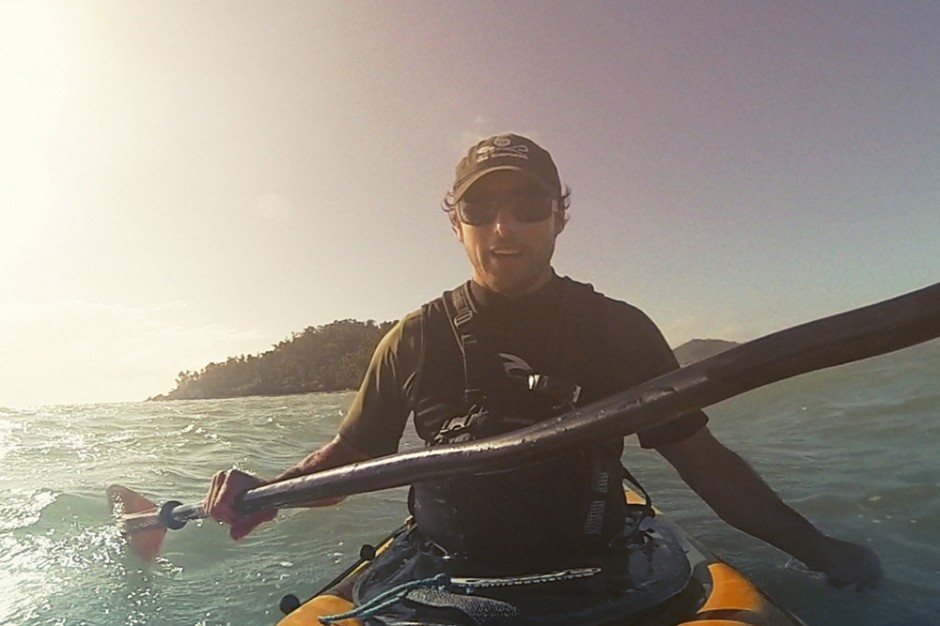 Back to the mainland

The sun shone again as James led us past Dunk Island on the way back to Mission Beach to conclude our epic seven-day adventure around Hinchinbrook Island.

This post is proudly produced in partnership with Tourism Queensland.
Tagged
Paddling Queensland: Adventure in the Sunshine State
What did you think of this story?
Meh
Good
Awesome
✖
travelstoke
Download the mobile app
stoked by