I LOST MY CRUISE VIRGINITY to the Star Flyer, one of the three vessels in the Star Clippers fleet. And I learned that size does matter.

Full disclosure: I haven’t been on a large cruise liner. But after much research and hours spent talking to self-declared “cruise aficionados” aboard the Star Flyer — who, between them, had been on 200+ cruises of all kinds — I’m pretty certain that I never will, despite the cheaper price tag. Here’s why.

Big cruise ships have several swimming pools, climbing walls, a multitude of restaurants and bars, the occasional casino, nightclub, and a variety of lounge acts running seemingly round the clock. Where the ship actually docks almost seems secondary in importance to the flashiness and grandeur of the ship itself.

But big ships don’t have sails.

Granted, most small cruise liners with room for 200 guests or fewer don’t often have sails either, but I figured, if you’re going to be out on the open sea, it should be in a sailing vessel. The Star Flyer, along with the Star Clipper and Royal Clipper, are sailing ships. Leaving port each night, the sails are raised, and for as much of the trip as they can, the ship is moving on wind power. 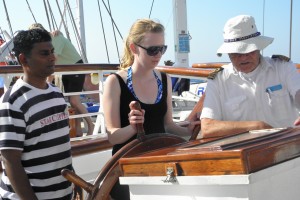 Being taught how to steer.

While the Star Flyer could and did also operate via engine and auto-pilot, the ship’s wheel was used when the vessel came in and out of port. Phrases like “hard to starboard” were actively in use on a daily basis. And if I’m going to be at sea, that’s what I want to hear — not who’s next on the climbing wall.

Random wind-related cruise tip, courtesy of our captain: The winds are best for sailing in the Caribbean, so much more of your time there would be spent using the sails compared to the engine.

The capacity of the Star Flyer is 170 passengers. The capacity of large ships can be around 20 times that size. With so many people, you could run into an awesome fellow traveler on day 1 and then never see them again.

With smaller numbers, you really get to know your fellow passengers. And there’s no reason for your grandparents to make up brightly colored matching t-shirts for your entire family to help you find each other at meal times.

The crew aren’t just nameless faces in the background, either. You’ll get to know them, officers and captain included. My last night onboard was spent singing “Country Roads” with an Indian waiter, Filipino kitchen worker, and Swedish sports team staff.

I have an extraordinary lack of patience, and I find waiting in lines or in traffic to be one of the banes of modern suburban existence. The bank, the grocery store, rush hour, the doctor’s office — I can’t stand it. On vacation, I want to avoid such banalities whenever possible.

I don’t want to think what our quiet beach on Sardinia would have looked like with 1,000 cruise shippers descending on it at once.

Having multiple everything on a big cruise ship means people are split up, which is an attempt to minimize wait times. But on popular activities, you’re likely to still be kept waiting.

Then, once you dock, everyone getting off is going to the same place. So the streets are full of your fellow cruisers, and you’re inherently limited to stopping in larger ports.

With a smaller cruise, you can enjoy the sea line-free and have access to relatively uncrowded beaches in port. I don’t want to think what our quiet beach on Sardinia would have looked like with 1,000 cruise shippers descending on it at once.

No washed-up or just-starting-out comedians, musicians, and variety performers, or experiences you could just as easily have on land. Our onboard entertainment was fairly eclectic. We had a lecture on bats, a combination shuffleboard/mini-golf game, water aerobics, wine-tasting, cooking demonstrations, talent show, piano music before lunch and dinner, and, my favorite, talks on navigation by the captain. 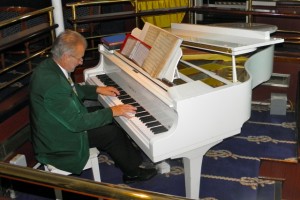 I feel that on a large cruise ship, I’d never have learned (from a captain with five decades of sailing under his belt, no less) that back in the day, a captain could determine the ship’s course/location by stripping down naked, settling into a downward-dog type position, and noting the direction/lean of his package. And that pirates wore eye patches not because they’d lost eyes in battle, as I’d assumed, but from sun damage from using a sextant for navigation.

On a small ship, you can climb the mast — an activity that feels timeless in terms of sailing. Or — and all I had to do was ask — you can, at least on smooth sailing days, take the ship’s wheel. Not a pretend spin on the wheel, which I was incredibly tempted to do, but actually steer. We may have been going remarkably slowly, and I may have had a crew member watching over my shoulder, but I was steering the ship.

And then there was the netting off the bow. Not long after sunrise, if you’re lucky, you can walk out onto it and watch dolphins swimming and jumping beneath you. Or take a nap out there. I’ll take that experience over a choice of five swimming pools every time.

Traditionally, cruise lines have “pre-set” dinner times. You eat at a set time in an assigned seat. Some larger cruise lines allow open seating in specific restaurants, which means just that — eat when you like, but it’s not necessarily for all of the restaurants or all of the ships. Or you may have the option of making reservations in a specialty restaurant.

If you happen to be invited to the crew party, everyone will know just how much you enjoyed it.

On my cruise I was by myself (ah, the mixed blessings of working as a travel writer), and I might have been screwed if I’d had to follow a pre-set dinner schedule. No options on my dining companions — I could have been stuck in third-wheel position for the entire week. Instead, I got to spend time with whom I wanted.

You can also dine with the captain and crew — officers and select crew eat in the passenger dining hall for all meals.

One woman slipped and broke her ankle — a complete accident that had nothing to do with the ship itself, but on crutches, she wasn’t able to easily get anywhere onboard. If you’re disabled or in a wheelchair, there aren’t any available accommodations.

Also a negative — if you happen to be invited to the crew party, everyone will know just how much you enjoyed it. And when I say enjoyed, I mean ended up apparently speaking in tongues and having to spend the next day feebly chewing on chocolate and downing water. For better or worse, there is no anonymity.

[Editor’s note: Kristin’s trip was sponsored by Star Clippers; all opinions are hers.]

The best places to visit in Jordan for every type of traveler
Monaco is more than a millionaire’s playground. Here’s how to visit on a budget.
The world’s 10 cheapest cities to explore in a day
The 25 coolest towns in America to visit in 2021
The best Airbnbs in Nashville for a bachelorette getaway

Is on-site COVID-19 testing the new ‘it’ luxury amenity?

9 ultra-luxe Black-owned resorts around the world

This glamorous hotel is coated in 24-karat gold everywhere, including the toilets