Although I’ve been living in Thailand for over a year, I never took the time to visit the southern part of the kingdom. When I heard about a bike tour organized by Beyond Boundaries Travel from Bangkok to Koh Samui, I realized this was the perfect opportunity to not only explore the area, but also to kick myself and get some exercise.

[Editor’s note: This was a press trip and Daniel’s costs for the tour were covered by Beyond Boundaries.
All photos by author, all rights reserved.] 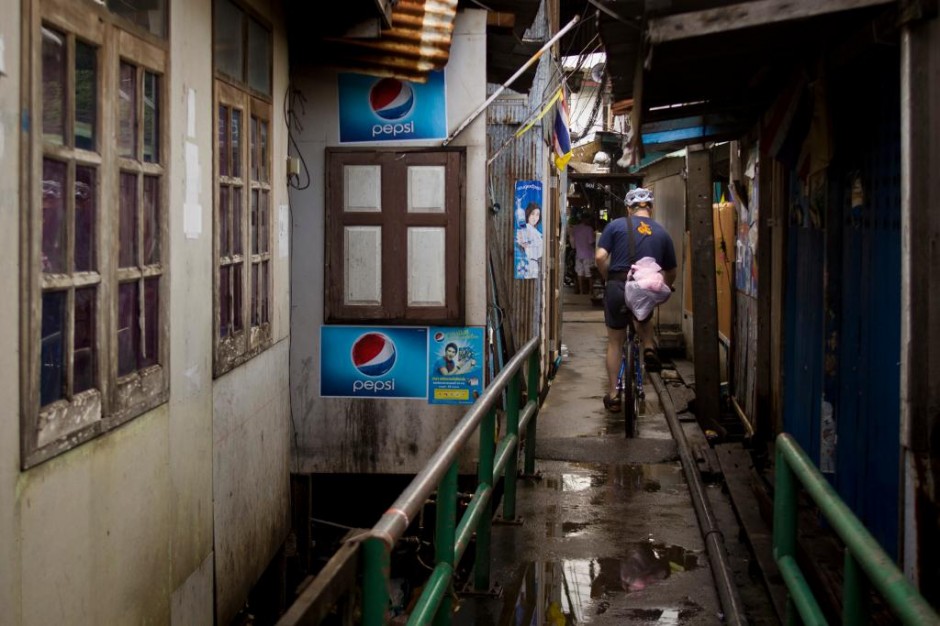 Exploring the back alleys of Bangkok

The tour starts by exploring narrow back alleys, hidden 300-year-old temples, and monitor-lizard-invaded canals of Bangkok, away from all tourist attractions. 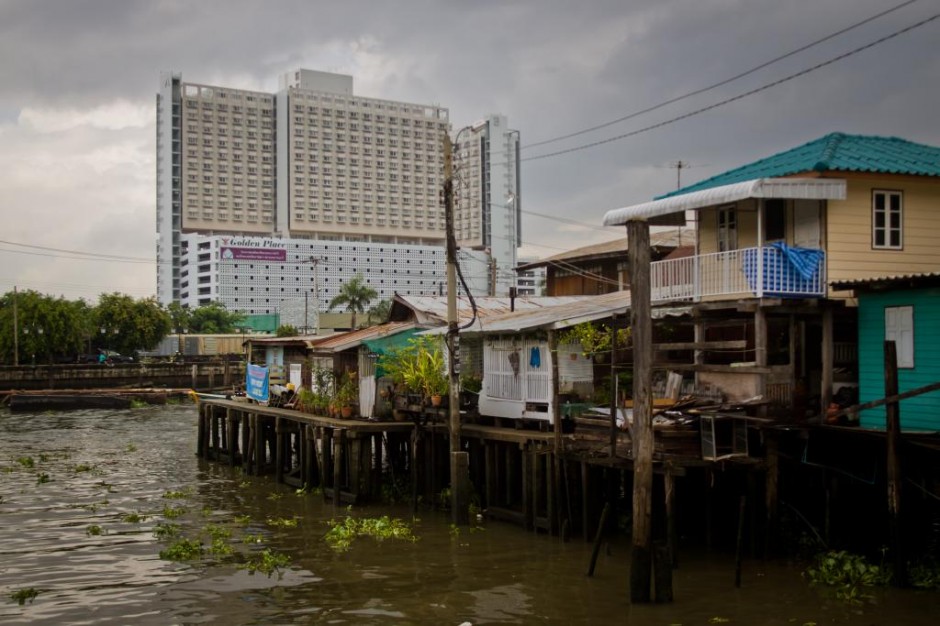 A Muslim neighborhood built on a canal, facing condos in Bangkok. The houses were offered to southern villages by the king of Thailand in exchange for being the "guardians of Bangkok" against invaders from the sea. 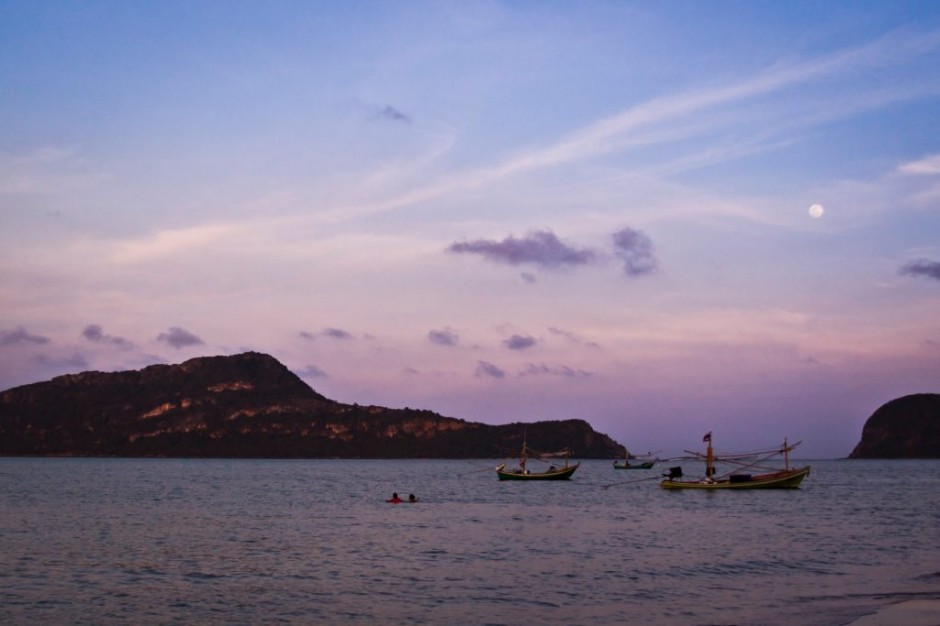 Fishing boats getting ready for the evening in a quiet bay near Hua Hin. Using green neon lights attached above the water, these boats go out until dawn to capture squids. 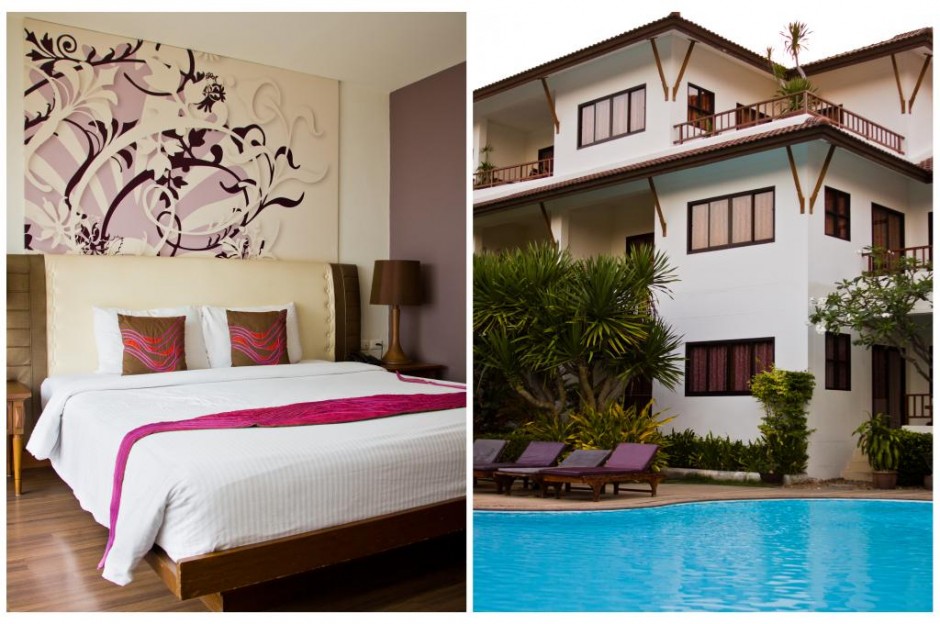 The daily bike rides end in luxurious resorts located in quiet and isolated areas. A great opportunity to enjoy a massage or jump in a pool and cool down. 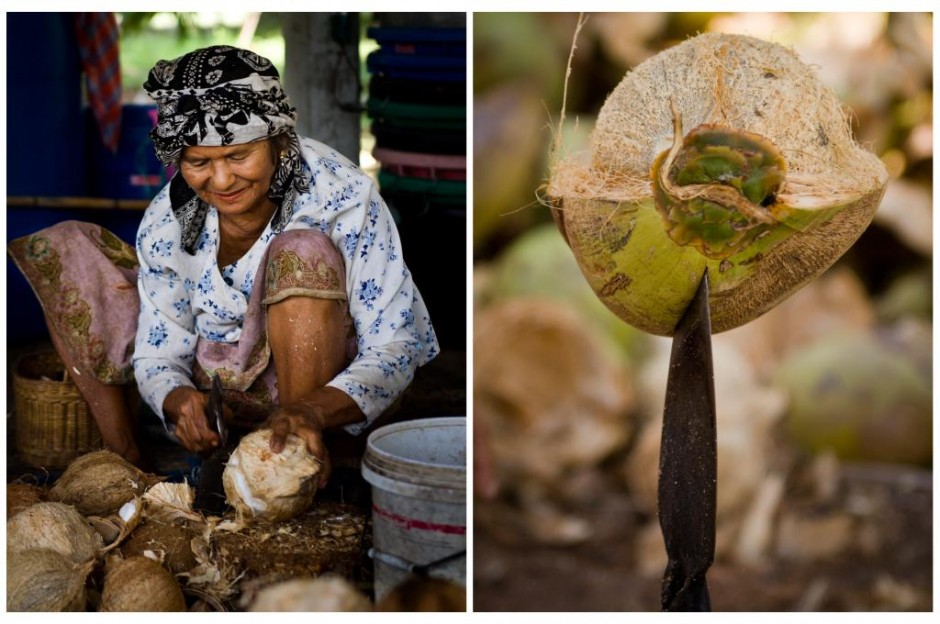 Coconuts are harvested by specially trained monkeys or workers using long bamboo sticks. The husk is then removed with blades firmly planted in the ground and the seed is cleaned with machetes. 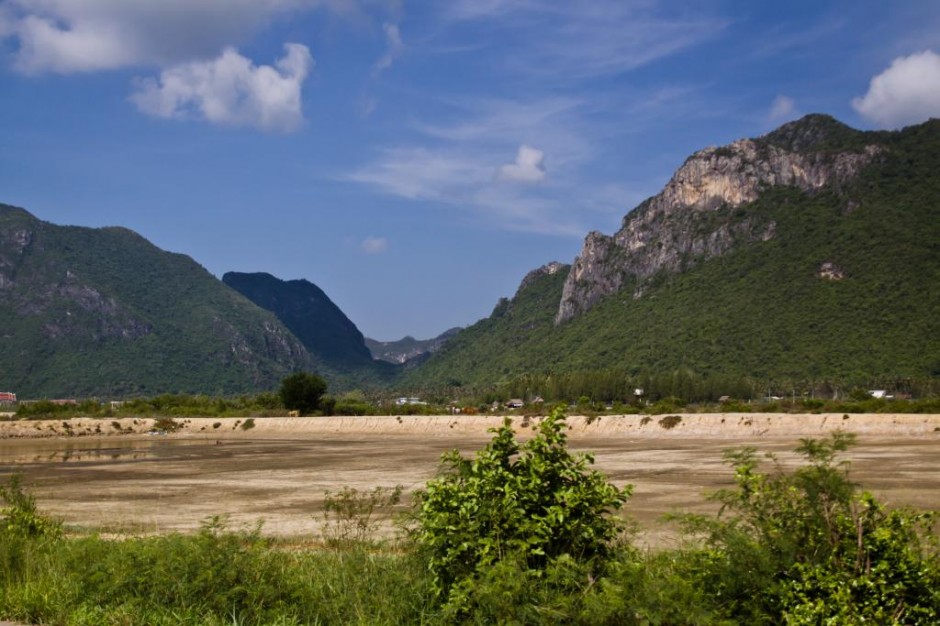 Biking through Sam Roy Yot (Mountain of 300 Peaks) National Park, home of the serow (a goat-like antelope), monkeys, mongooses, and over 300 species of birds. 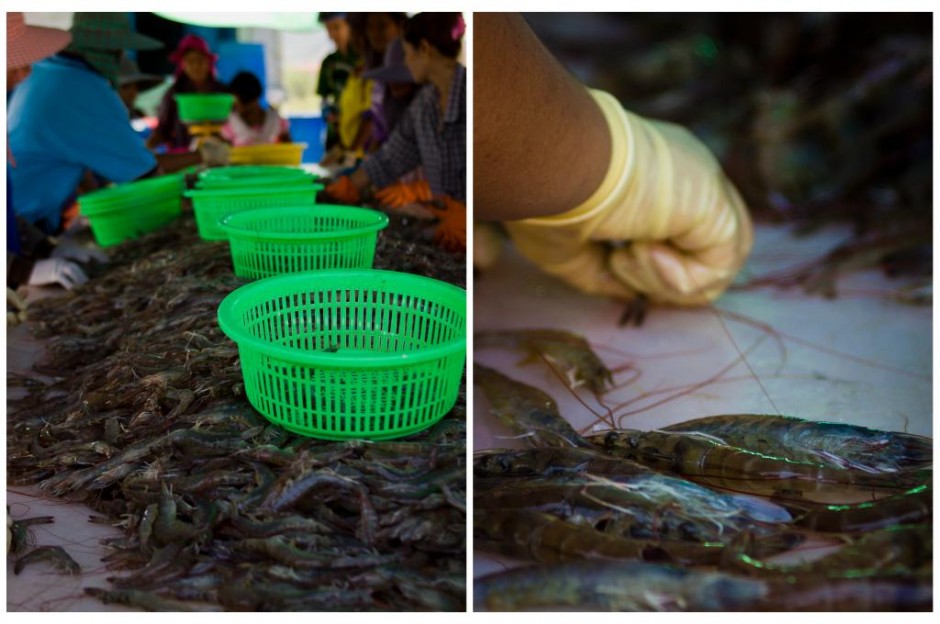 Prawn farms in the national park

The Sam Roy Yot National Park conservationists are in constant battle against local industries setting up shrimp farms and destroying the mangroves in the area. Each farm produces more than 600 tons of shrimps per year. 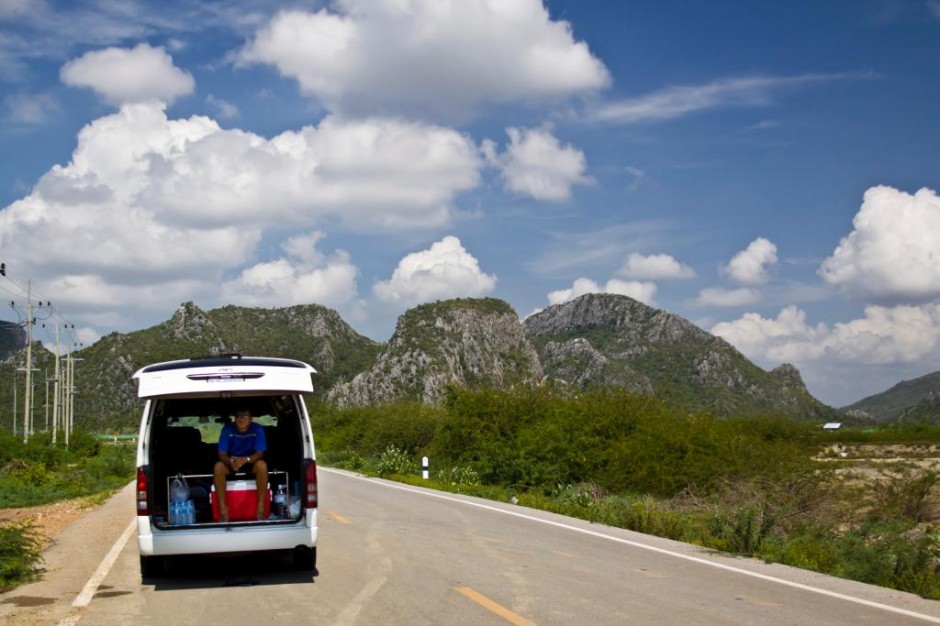 A van is always available to carry bags, required equipment, refreshments, and tired bikers wanting to skip parts of the route. 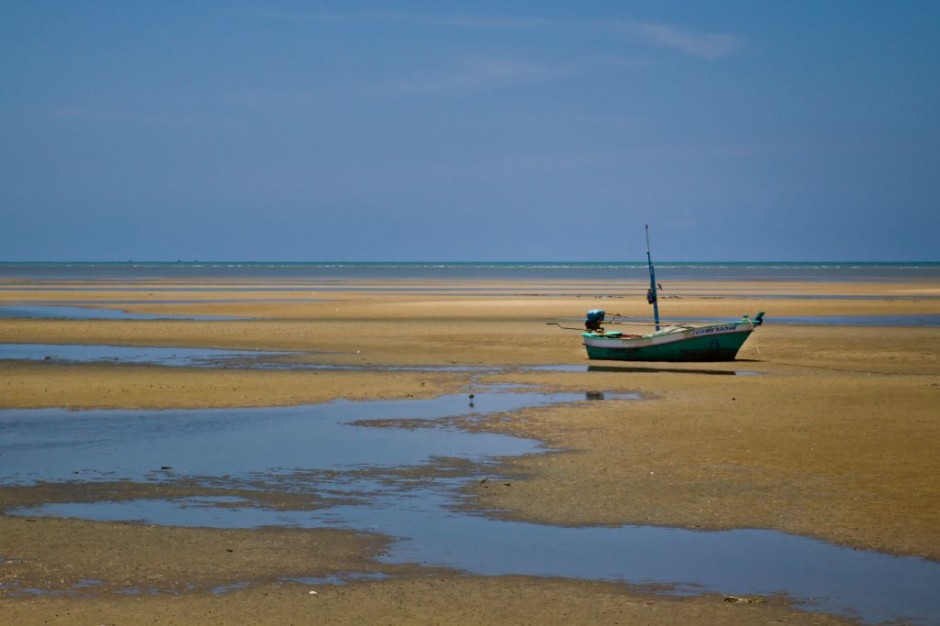 Stranded boat on a beach

The coast between Hua Hin and Chumphon has very shallow waters, making it difficult to swim without having to walk a few hundreds of meters before it gets deep enough. 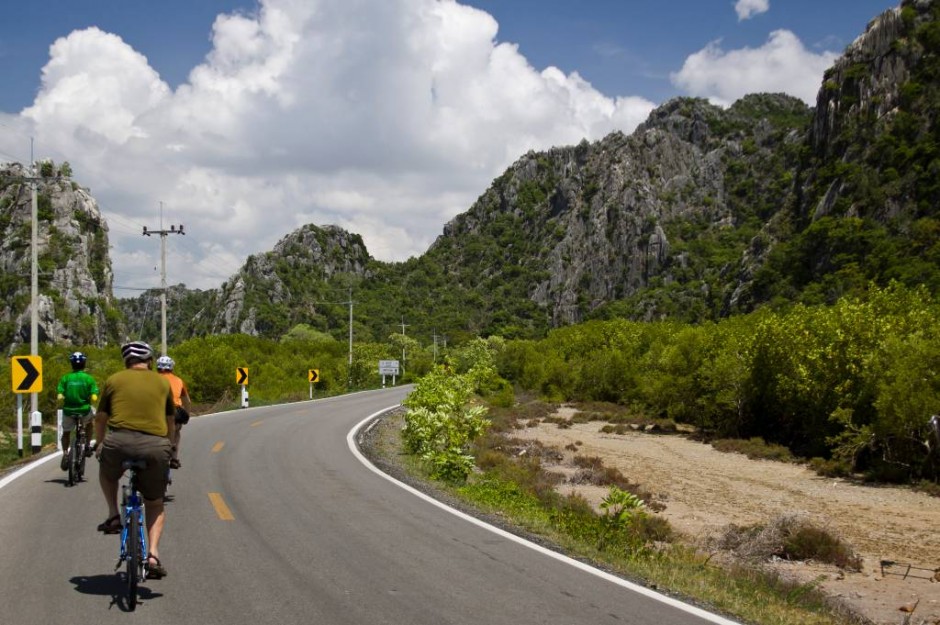 Biking through the limestone mountains of Sam Roy Yot National Park, where curious macaque monkeys hang out along the road. 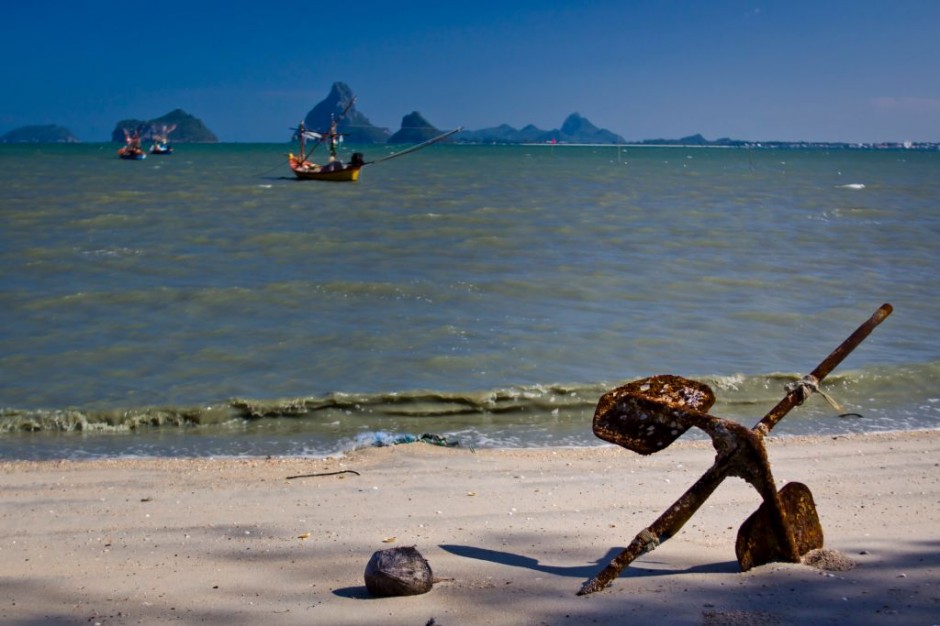 The Prachuap Khiri Khan bay, circled by a beautiful white beach with its fishing boats lazing under the sun. 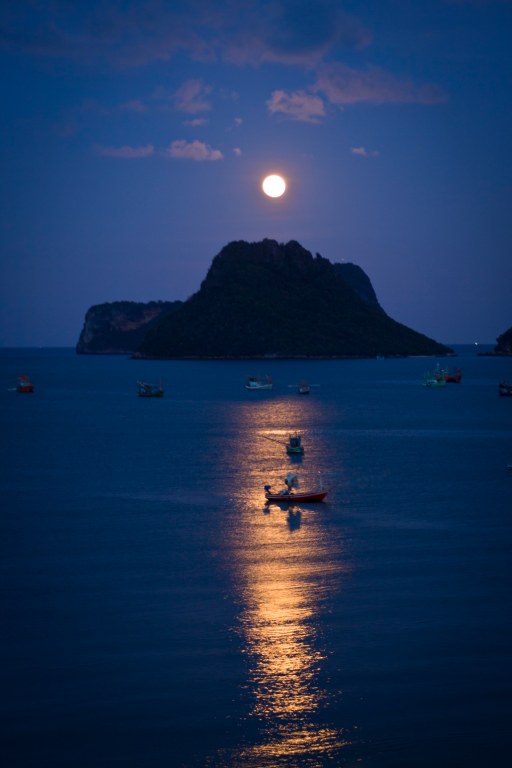 Moon over the islands

A full moon rising over the islands of Prachuap Khiri Khan bay while fishing boats get ready for the night shift. 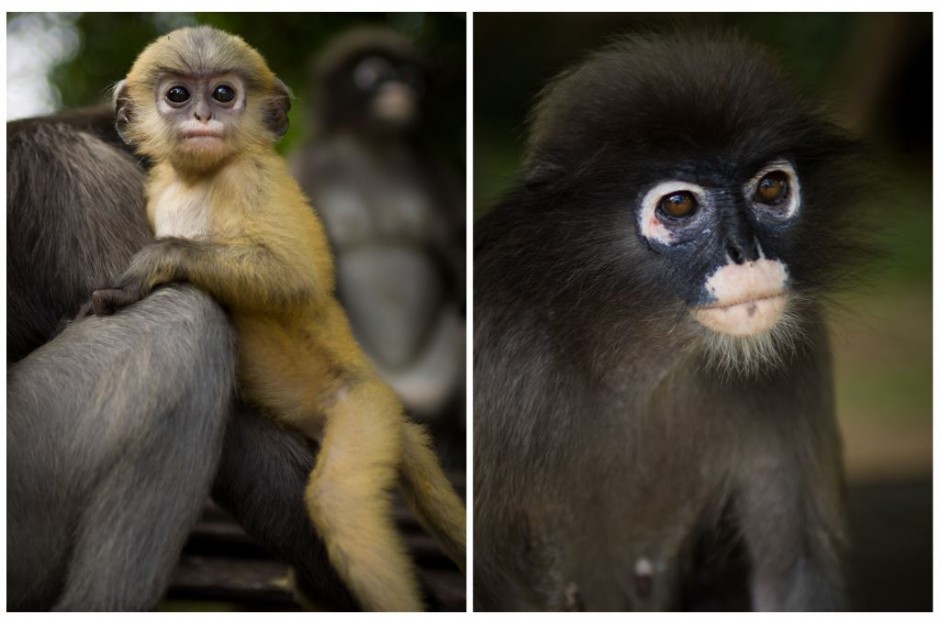 Near Ao Manao bay, under the protection of the Thai Royal Air Force, is a little hill home of Langur monkeys, some of the most gentle monkeys I have ever encountered. The babies have orange fur that turns brown when they become adults. 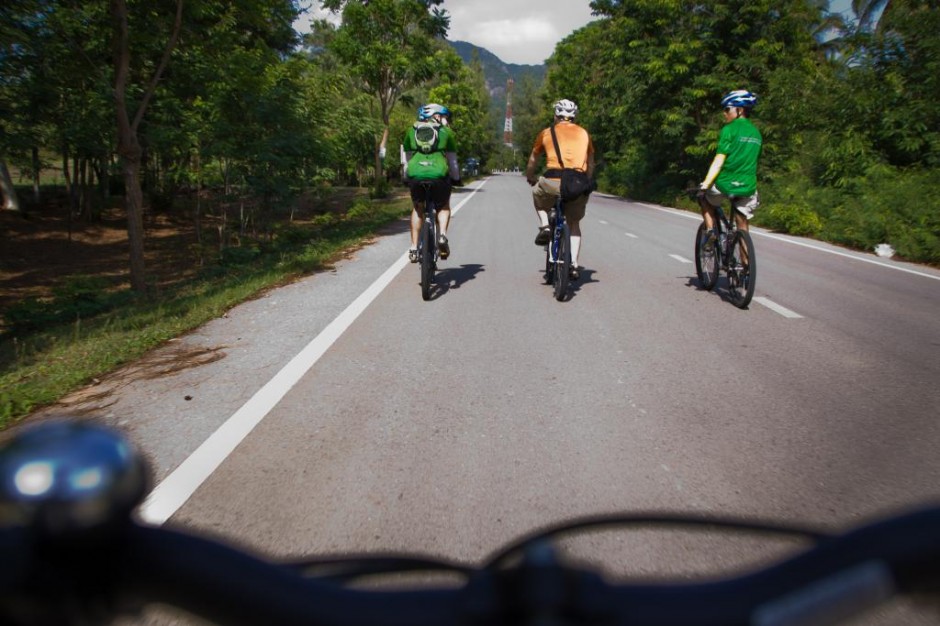 Riding along the coast

The guides from Beyond Boundaries Travel make it a really easy and enjoyable experience, providing tips and information as well as encouraging and supporting the slower riders. 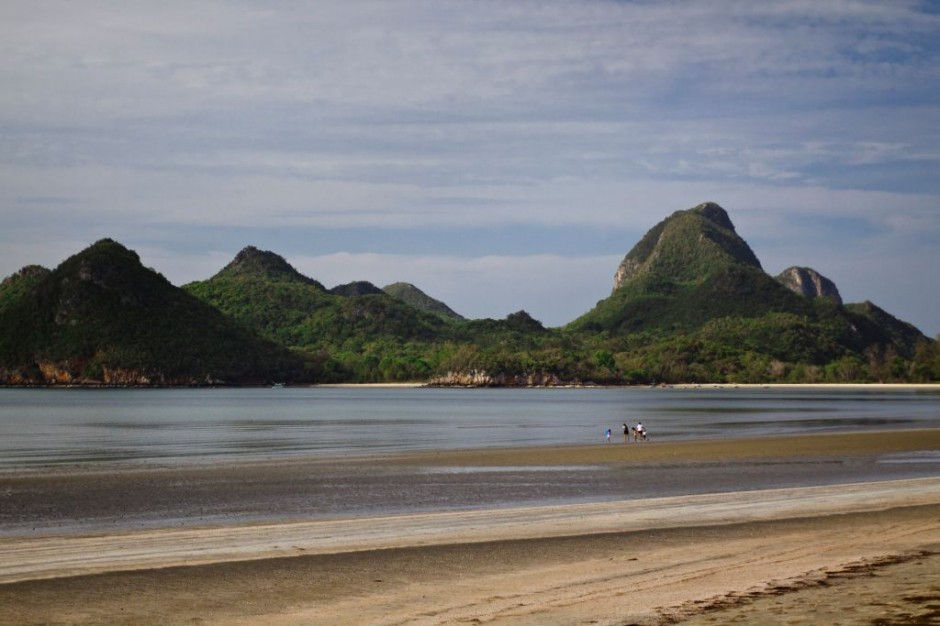 Ao Manao is a perfectly semicircular bay under the care of the Thai Royal Air Force. This bay was actually the point of invasion of the Japanese Army during the Second World War. 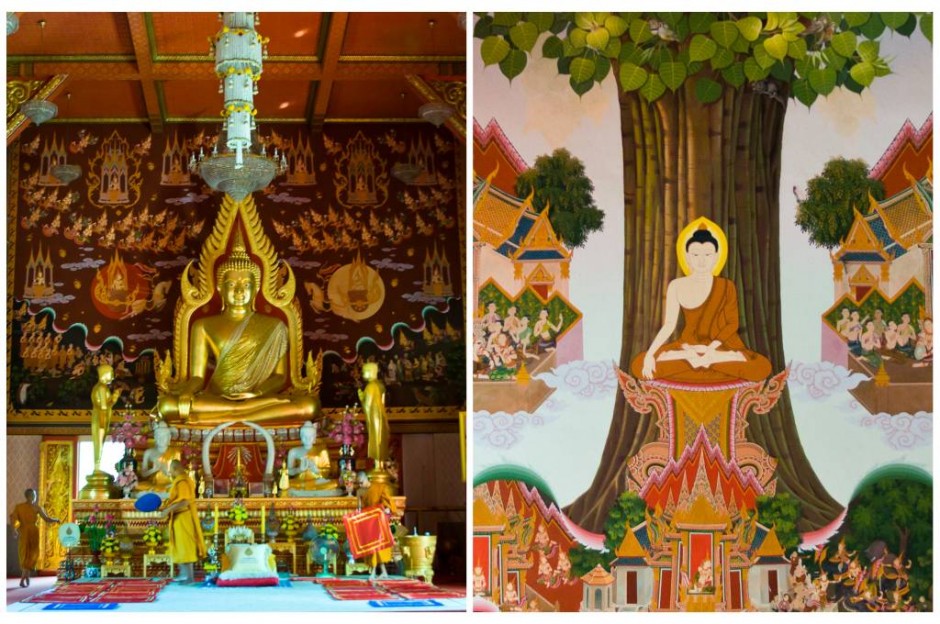 In a country where 94.6% of the population is Buddhist, temples are found everywhere, differing in style depending on the region. Each temple usually contains one or more golden Buddha statues and murals portraying his life covering the walls. 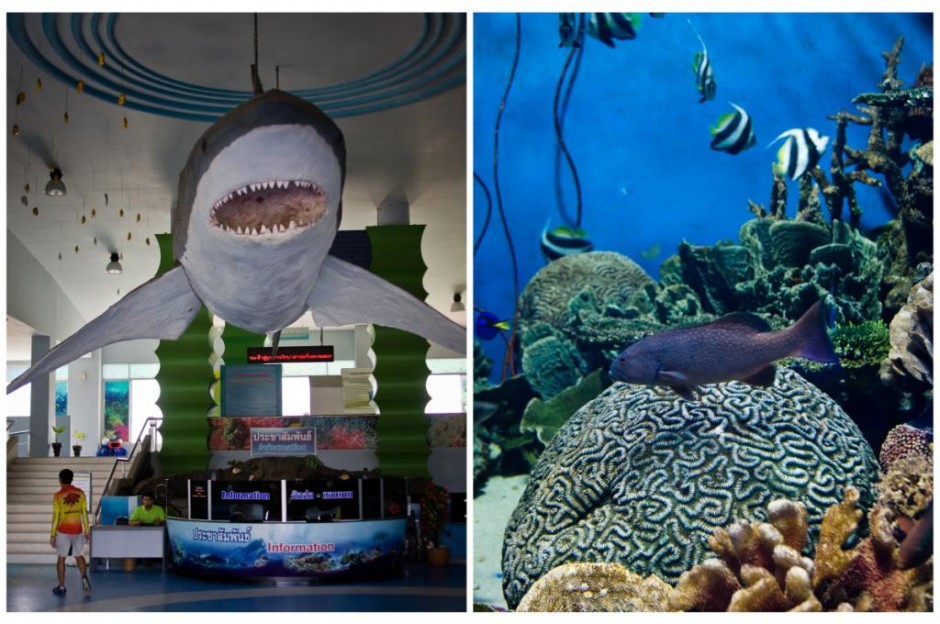 The Waghor aquarium along the way is a great place to discover the different underwater species inhabiting the coast and rivers of Thailand. 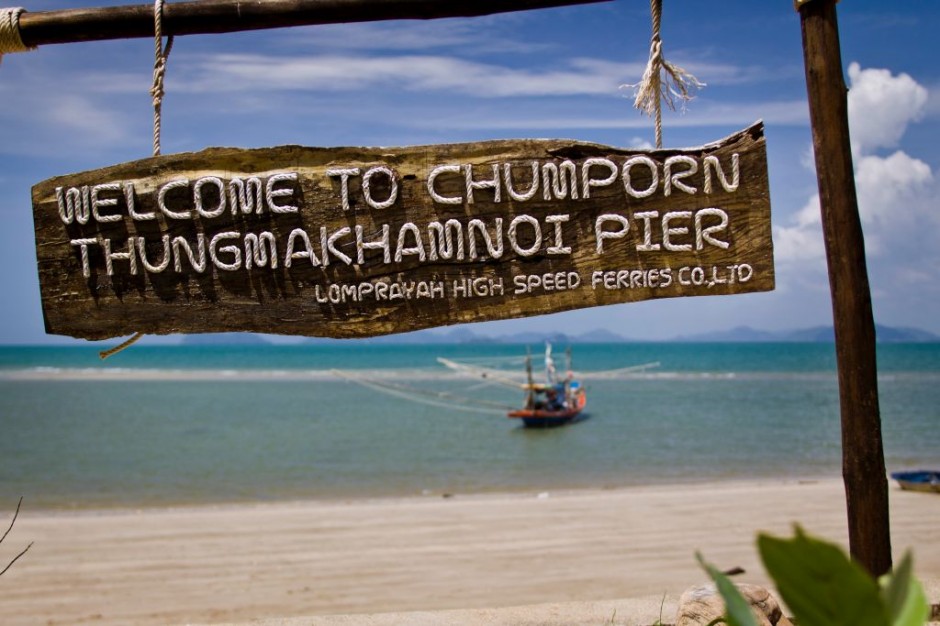 The last destination on the mainland during the bike tour. A high-speed catamaran takes us from here to Koh Samui. 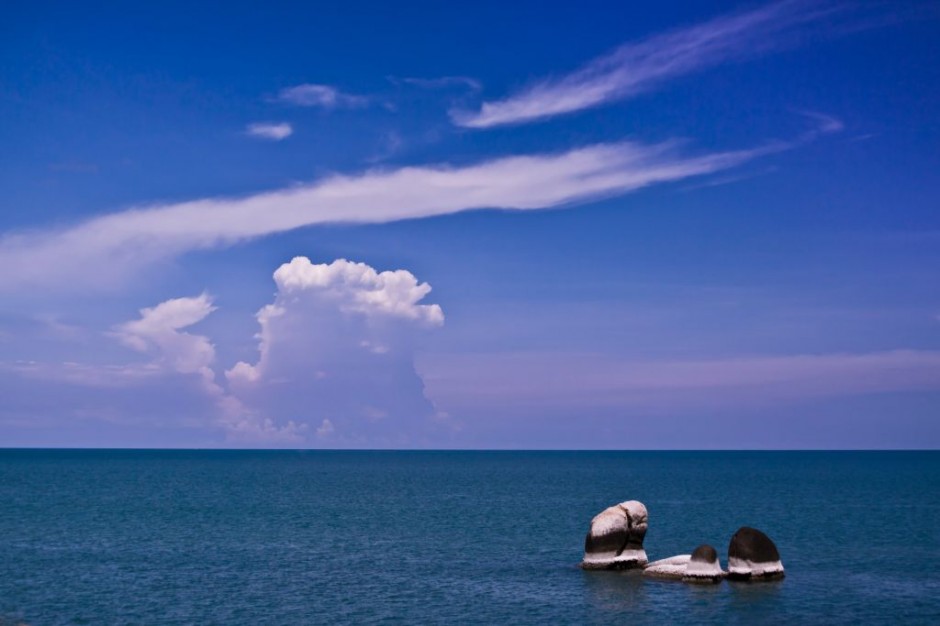 The final destination of the tour serves as a reward: a few days of relaxation and sunny beaches on the island of Koh Samui. 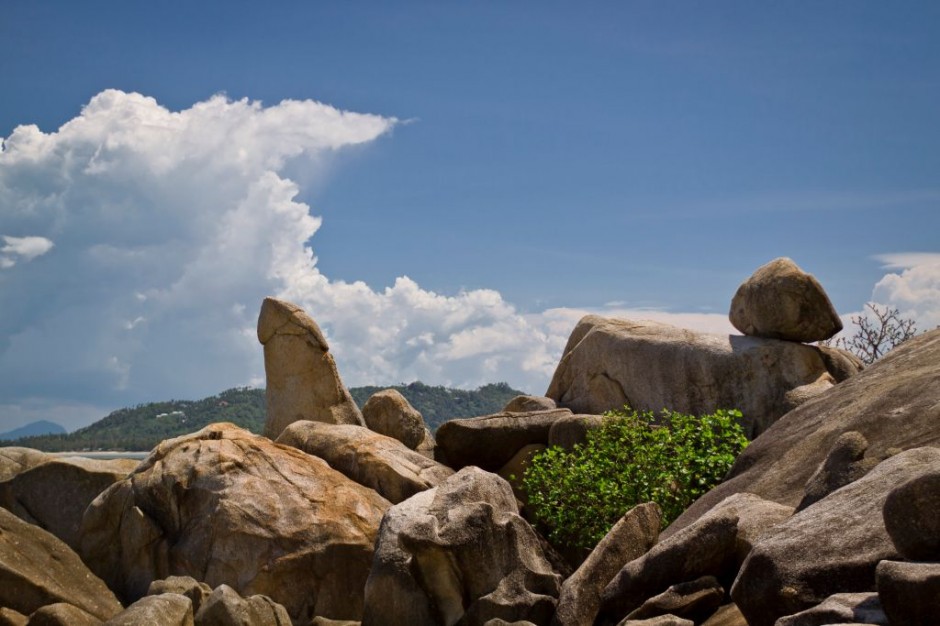 A popular spot in Koh Samui, the Hin Ta and Hin Yai (Grandfather and Grandmother) rocks attract many backpackers wanting to photograph the "Penis rock".

Tagged
Cycling Thailand
What did you think of this story?
Meh
Good
Awesome