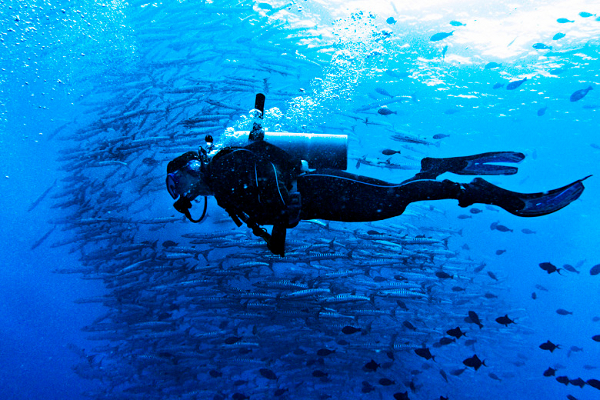 Divemaster Christina Koukkos shares her favorite spots to get wet in Malaysian Borneo, plus where to stay, what to eat, and how to get there.

How to get in

Area of interest: off the east coast of Borneo, in the Celebes Sea

Most divers fly in to Tawau, the closest airport (a 90-minute drive) to Semporna, a charm-free Malaysian town on Borneo proper. (Both AirAsia and Malaysian Airlines have cheap flights from Kuala Lumpur, Bangkok, and other regional hubs.)

Semporna dive shops and hotels offer discounted or free transfers from the airport if you’ve booked in advance. A less convenient option is to take a public bus into the town of Tawau (thereby going 20km in the wrong direction) and switch to another public minivan to Semporna — a trip that could take 4 hours or more.

Instead of this headache, if you haven’t booked in advance I advise charming a fellow traveler into splitting the cost of a taxi.

An alternate entry point is to fly to Kota Kinabalu, the capital of the Malaysian state of Sabah. This makes sense for travelers who first want to visit an orangutan sanctuary, take a river trip, climb Mount Kinabalu, or just see the rest of Malaysian Borneo before diving.

Where to kit up

1. Scuba Junkie – If you want to do a PADI course, choose Scuba Junkie, which has dive shops in both Semporna and Mabul. It’s an efficient, professionally run operation with a mix of Western and Malaysian staff.

The instructors are all incredibly knowledgeable, the classes are small, course prices rival what chumps pay at the diver-factories on Koh Tao (Thailand), and you actually learn how to dive.

If you’re just fun diving, the SJ divemasters are the best in the history of the world. Really.

Disclosure: I worked as a Scuba Junkie divemaster for 6 months. Yes, I’m slightly biased. But I wouldn’t have worked there if I didn’t believe in them.

Mabul is an island of the stereotypical palm-fringed, white-sanded variety that happens to be encircled by spectacular macro diving.

Mabul-based dive shops have booking offices in Semporna, most of which are situated along a strip near the Dragon Inn (see page 2). Also, as there are no independent restaurants or hotels on the island, divers on Mabul generally dive and stay with the same company. Accommodation includes all meals.

3. Scuba Junkie’s Mabul Beach Resort – If your budget isn’t hardcore backpacker, this is by far the best deal. The dive shop/resort is set on the cleanest stretch of beach on the island. The rooms, including the two 4-bed dorms, are simple and elegant, each with a private balcony. The food is delicious, the staff is friendly, and Matt the barman has a rotation of potent custom cocktails on the menu.

4. Big John’s – As you might expect, Big John’s is run by a large Malaysian man called John. It’s a small shop, so it feels you’re diving and staying with a local family. BJ’s offers backpacker accommodation, meals, and a cozy atmosphere. Members of the dive staff, mostly locals, all have eagle eyes. (Email: bigjohnlim@hotmail.com)

5. Borneo Divers – Another well-run, midrange option on Mabul. There’s a swimming pool for resort guests and a beach bar that sometimes rocks but is often dark and empty.

6. Sipadan.com – A relative newcomer that offers diving and budget accommodation. I’ve heard good things, though I never went diving with them. I can, however, testify to the fact that the staff is tons of fun at the bar.

7. Uncle Chang’s – I’ve heard a few stories from divers about unsafe diving practices and equipment issues with Uncle Chang’s. But if you haven’t reserved a Sipadan permit in advance, you’re most likely to have last-minute luck here.

Where to get wet

Some dive shops run trips from Semporna, others from Mabul. You can get to most dive sites from either location, though it’s a good idea to ask if you’ve got a special request.

A 25-minute speedboat ride from Mabul, Sipadan is a reef-ringed pinnacle situated on the edge of the continental shelf. The reef attracts colorful schools of fish, which in turn attract pelagics — sharks and such — that regularly stop by to feed or get cleaned.

Due to its distance from other islands and its status, since 2003, as a marine park, the reef has escaped the dynamite fishing that destroyed other underwater habitats in the area. It’s continually listed among the top 10 diving destinations in the world.

Sabah Parks, which administers the island, limits the daily number of visitors (mostly divers) to 120. It’s therefore vital that you book your Sipadan diving 2-6 months in advance.

1. Barracuda Point – My dive group and I descend into a teeming mass of surgeonfish. Following the wall, we slam into a 7-meter-wide school of bigeye trevally. I telepathically beg the trevallies to please move, the better to watch the grey reef sharks eyeing us as they glide by. Ten minutes into the dive, I stop counting green turtles, an endangered species, at 30.

Just before we take a right into the channel in the reef, we dip down to 25 meters to watch 2-meter grey reef sharks swarming in the ripping current. We ascend and hit the channel. On our right, five white-tip sharks lounge on the rubble bottom, where electric-blue cleaner wrasses pluck parasites from their bodies. To the left, a 1,000-strong funnel cloud of chevron barracuda engulfs another dive group.

We follow the channel to the end, where I glimpse an eagle ray whizzing past. As we ascend to do our safety stop, I get buzzed by a turtle heading to the surface for air. A marauding horde of bumphead parrotfish thunders along the top of the reef, gorging on coral.

All my divers are grinning behind their regulators. They’re all low on air. No one wants to leave. This is what Sipadan is all about.

2. South Point – I descend slowly, counting turtles. There’s usually a species convention at the top of the reef, on a rotating schedule. Some days it’s unicornfish. Some days it’s surgeonfish. Or bumpheads. Or snapper.

Keeping the wall on our left, I search the rock and coral for moray eels, nudibranches, and squat shrimp…but my customers only have eyes for the passing sharks. As the plateau starts to jut out from the reef, we leave the wall to hover over the white-tips at the cleaning station below, at 50 meters. If there’s a strong current, grey reefs hurry past.

We approach the corner of the reef, where the strong current could sweep us out into the blue. Instead, I cut across the channel to see yet more white-tips at yet another cleaning station. As the group takes pictures, I keep an eye out in the blue, hoping we’re lucky enough to spot a passing manta ray or hammerhead shark or (I’ve heard) even a thresher.

We ascend to do a safety stop over the coral garden that is the top of the reef. Baby white-tips snooze under table coral, while green turtles scratch themselves on top of it. A titan triggerfish, protecting its turf, tries to take a bite out of my fin. And face.

The guidebooks tout Sipadan. Fair enough. But Mabul and other area islands are among the best dive destinations in the world to see macrolife — marine species that are small, odd, incredibly cool, and often overlooked.

3. Awas – Awas the word means “danger” in Malaysian. Awas the dive site means “Holy shit is that a sea moth?” in divespeak.

This is a sand dive — no pretty coral here. But the sand, rubble, and sea grass make for a macro diver’s dream.

I’ve found flying gurnards and fingered dragonets flitting across the sand; a delicate ghostpipefish, doing its best impression of sea grass, floating wherever the current takes it; stone fish, normally masters of disguise, hoppity-hopping across the sand; blue-ringed octopus and flamboyant cuttlefish, flashing their colors to warn of their venomous stings; schools of pharaoh cuttlefish mating or laying eggs or fighting; a napoleon snake eel, its head stuck up from the sand like a desiccated tree stump; green turtles the size of spaceships flopped out in the middle of the sand.

And then there are the crustaceans: skeleton shrimp, anemone cleaner shrimp, porcelain crab, arrowhead crab, boxer crab…I could go on. But I won’t.

4. Artificial Reef – This enormous dive site is composed of dozens of artificial structures that have been sunk in the sand off the northeast corner of Mabul. There are a few small “wrecks,” but the most interesting marine life is attracted to the wooden boxes — some as big as a country chapel, some as small as a lobster trap.

It’s not uncommon to spot ten or more frogfish — relatively rare, deviously camouflaged, wonderfully awkward creatures. A swimming frogfish is like Fat Albert dancing ballet. Also, there’s a resident school of jacks (bigeye trevally) that’s bigger than the one at Sipadan. Plus leaf scorpionfish, nudibranchs, ornate ghostpipefish… Again, I could go on.

5. Eel Garden – A coral reef that slopes down to a sandy bottom at around 20 meters. When I was working, a pair of spotted eagle rays had taken up residence here. Such elegant creatures. But even if the rays are gone, there are always the eels: garden eels and ribbon eels and giant moray eels and white-mouthed morays and white-eyed morays and spot-faced morays.

This is also where a diver once found a frogfish the size of an infant’s pinky nail. You might not think that’s extremely cool, but I do.

There’s plenty more diving in the area, some of which can only be reached on day trips from Semporna.

6. Siamil – First Beach
Like the rest of the Scuba Junkie dive staff, I would beg and plead and finagle and whine at whoever was doing the schedule for a spot on the once-weekly boat to Siamil. The island is a one-hour speedboat ride from Mabul, so to dive here I had to wake up early and come back late. I didn’t care, because I wanted to dive First Beach as often as possible.

Like Awas in Mabul, First Beach is sand, sea grass, and rubble. But there’s even more rare and crazy shit here: sea moths, a different species of blue-ringed octopus, zebra crab, wonderpus (which I, alas, didn’t see), and tons more.

This diving’s not for everyone — you have to love tiny, weird, rare stuff — but if you’re into macro, this will be your favorite spot.

7. Kapalai – House Reef
Kapalai is not so much an island as a submerged sand bar with a resort built on top and ringed by a coral reef.

Like Artificial Reef at Mabul, House Reef Kapalai has a few “wrecks” and some sunken structures where you can find giant grouper and other sea creatures. But the most action is on the coral reef, where there’s tiny squat shrimp, giant moray eels, frogfish, octopus, leaf scorpionfish, and much more.

Next Page
Tagged
Diving Trip Planning
What did you think of this story?
Meh
Good
Awesome