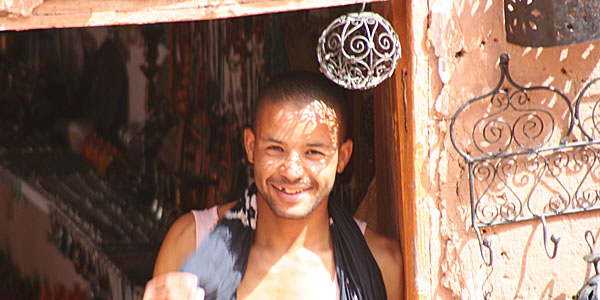 Photo above and feature photo: Gret@Lorenz

A country of four mountain ranges, two long coastlines, and desert, Morocco doesn’t need to try very hard to be diverse in its culinary arts, sacred spots, and romantic settings.

Rabat and Fez are the best places for serious culinary explorations. While Rabat is the most modern and comfortable Moroccan city, Fez is traditional and fascinating. Both offer perfect moods for culinary adventures and both have attracted some of the best chefs in the country.

Some might argue that Marrakech is also a great culinary destination — and I wouldn’t disagree — but what’s happening in Rabat and Fez goes beyond catering to tourists and is directed at locals as well.

Here are some unique Moroccan culinary experiences worth seeking out: 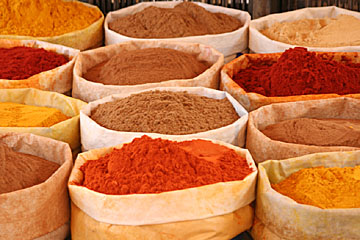 You can find these for sale along the road from Rabat to Meknes.

Artfully stacked on overturned buckets, they’re sold near oak trees growing in a special soil that stimulates the symbiotic relationship between the truffle and the oak roots.

A specialty of Morocco. It’s a toasty, nutty oil, traditionally derived from a complex process: the undigested pits of the Argan fruit, after being eaten by tree-climbing goats, are picked from the animals’ dung, then cleaned and toasted.

Next, the pits are ground or pressed and the oil is bottled for culinary uses or further processed for cosmetic creams and ointments.

But worry not, today the oil is produced in a more sanitary way. Its taste is a cross between peanut oil and freshly mashed green olives — an absolutely delicious way to dress a salad.

Taliouine — south of Marrakech — offers a unique twist to the more commonly available Spanish and Iranian saffrons. The saffron of Taliouine has its own flavor due to southern Morocco’s soil makeup.

The Meknes Valley yields the finest Moroccan wine, which has come a long way. While wine grapes have been grown here since Roman times, in the past twenty years the industry has begun to make certain vintages that wine lovers the world over would gladly add to their cellars. 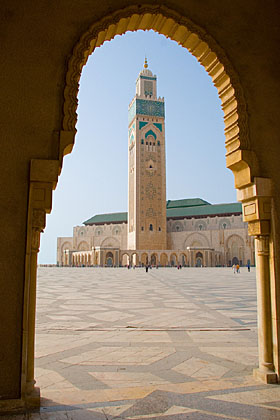 A particular favorite of mine is Château Roslane Premier Cru from A.O.C. Les Coteaux de l’Atlas.

Steamed and ladled cups of brothy escargot are a fun snack that you will most likely see on the street at night.

People gather around the snail seller’s cart and sip and nibble on these hot little striped-shell delicacies.

The biggest challenge to travel in Morocco is that non-Muslim visitors are not allowed into mosques and shrines, with the Hassan II mosque in Casablanca being the exception.

Yet, the natural beauty of Morocco more than makes up for this and possesses what my Moroccan friend Saadia would call “the Big Waloo” — the Big Nothing — as in total, pure divine presence.

From ocean vista to mountain pass to the Big Waloo of the rosy-orange desert dunes of the south, the natural world’s sacred is open to all. You can take your pick following your own preferences.

For ocean-lovers, explore the Atlantic coast from Asilah to Essaouira. 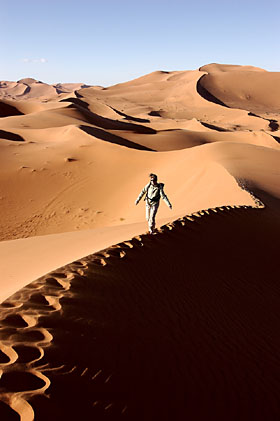 If you’re into mountains, anywhere in the interior — from north to south — gives way to great views whose only sign of human habitation comes from the shepherds and their brown-faced sheep, black goats, and sturdy donkeys.

Those who hear the desert’s call should head south to Merzouga and ride on a camel trek into the dunes.

For a rare chance at experiencing Moroccan sacred traditions as a local, come to Fez in June and July for The Fes Festival of World Sacred Music, when sacred spaces otherwise closed to visitors open their doors throughout the city.

Another similar music festival unfolds annually in Essaouira in June: The Gnaoua and World Music Festival.

Asilah and Essaouira command a romantic air, with their oceanside settings and well-established art scenes. These are also two cities with an open, international mood that makes them relaxing.

Asilah is smaller and a bit more intimate, while Essaouira has more expansive possibilities. Both have the dramatic backdrop of fortified old towns against the great watery blue of the Atlantic.

Rabat is Morocco’s most mellow and cosmopolitan city, one that invites visitor interaction with the locals. Numerous cafes offer comfortable places for men and women to enjoy a cup of tea or coffee. 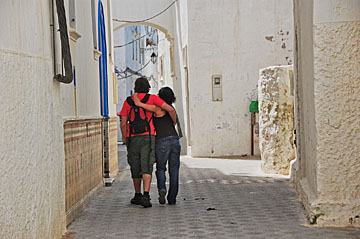 Seaside Rabat’s medieval neighborhood, the walled medina, is a welcoming place to walk, shop, and talk to artisans carving or painting wood or working silver and gold.

Finally, the Roman ruins of Volubilis, the Roman provincial capital of this part of Africa (and known in Arabic as Walili), is worth a mention.

Its romantic appeal lies in the beautiful Meknes Valley that surrounds it, and in the ancient stones and mosaics of the old city.

Other guides in the Eat, Pray, Love series can be found on Portugal and Spain.

Three more articles that will satiate your food, spirit, and love needs are The World’s Best Cities for Late Night Food, How to Respectfully Visit Holy Places Around the World, and The Romantic’s Cheap Guide to Southern France.

Tagged
Trip Planning Morocco
What did you think of this story?
Meh
Good
Awesome

11 side effects I had as a traveler in Morocco

Everyone thinks Morocco is dangerous for solo female travelers. Here’s why I can’t wait to go back there.

The profound beauty of a Muslim country

A video memoir of Morocco

This video will get you stoked to visit Morocco

How to explore Morocco’s mystical Atlas Mountains on foot