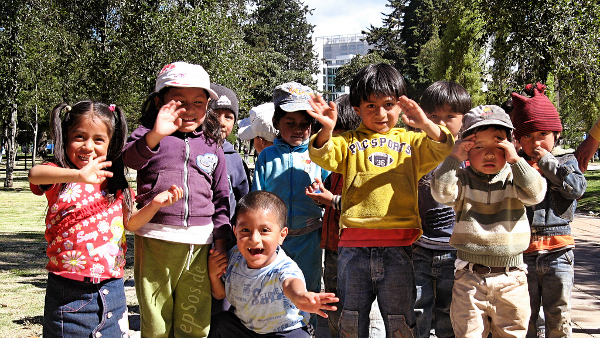 [Editor’s Note: This post was originally written as an assignment for the MatadorU Travel Writing Course.]

I SPENT THE SUMMER in Quito, Ecuador, doing research at a nonprofit law office.

Because the office building was located in the center of the tourist district, I frequented the internet cafes in the area and met several backpackers who seemed disappointed with Ecuador’s capital city. After a while, I noticed a pattern. There was one thing every dissatisfied traveler had in common: they didn’t escape Gringolandia.

La Mariscal, or “Gringolandia,” is nicknamed for the tourist hot spot that it is. Walking along the one-way streets in this Quito barrio, you’ll meet gringos galore, hear dozens of languages, pass hundreds of backpacker-friendly hostels, and run into a tourist travel agency on every corner. 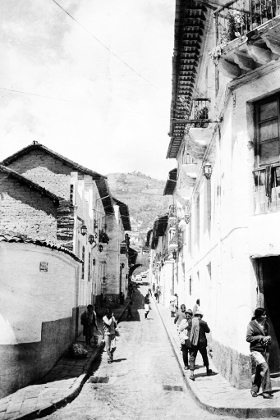 It’s not that Gringolandia isn’t fun — it is. Even locals go to La Mariscal for the karaoke bars, late-night cafes, and discotecas.

But it gets old after a few nights of nonstop party. To explore a different Quito, escape the gringo bubble and check out some of these places.

My guidebook is only a few years old, but it didn’t say anything about La Calle Ronda. It wasn’t until my despedida two months after I arrived in Quito that I finally got a chance to visit this busy pedestrian street in the historic center, or “Old Town.”

We roamed for a few hours, checking out the precolonial architecture and snacking on some Ecuadorian chocolate from one of the specialty shops. It’s admittedly a little touristy, but I couldn’t believe I lived in the city for two months without knowing about this place.

Tip: Since the public trolley lines are closed at night, ask a taxi driver to take you to La Ronda from La Mariscal for a few bucks. If possible, ask for his number, because taxis back into Gringolandia can be hard to find. Learn more at Quito’s official tourism site.

Get Carnivorous in La Floresta

One stormy night, an Ecuadorian friend from the office led me about fifteen minutes away from Gringolandia through the cobblestone streets and bumper-to-bumper traffic. 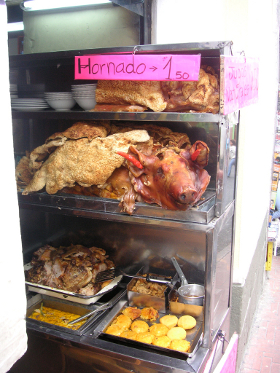 After dodging reckless taxis and hopping rain puddles, we arrived at the outdoor food market at Parque Genaro Larrea in the residential neighborhood of La Floresta. Steam and smoke formed a fog over hot grills as street vendors cooked a colorful array of meats I didn’t recognize.

The most popular options are tripa mishqui (pork intestines), guatita (cow belly stew), and morcilla (blood sausage, in this case served on a stick).

One of my fondest memories of Quito is huddling around the warm grills, munching on sweetmeats, and trying to guess what grilled organ we were eating at the moment. Unlike La Mariscal, you won’t find any burgers in La Floresta.

Tip: Parque Genaro Larrea is the official name of the market, but it’s more commonly known as the La Floresta redondel (traffic circle), located at the intersection of Madrid and Ladron de Guevera.

If you’re looking for souvenirs, stay away from the overpriced stores in Gringolandia and check out Parque El Ejido instead.

This public park is very well maintained, and there are over a thousand species of native flowers and plants on the grounds. On Saturday afternoons, local artists and craftsmen line its borders, selling everything from hand-carved wooden figurines to knockoff Guayasamín oil paintings. 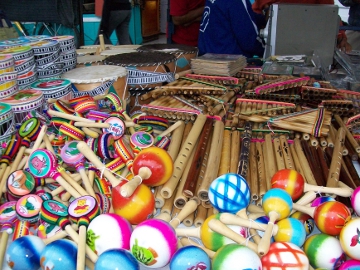 If you want to buy, most artists will unstaple the canvas and disassemble the frame so you can roll up the painting and store it safely in your luggage.

Inside the park, people sell fresh-squeezed coconut juice and families have picnics by the massive playground. There’s also a tented area where many indigenous artisans sell hand-knitted wool sweaters and silver jewelry.

Whatever you’re looking for, just remember the golden rule of shopping in Quito: haggle and pay half.

Tip: This giant park is located right along the main avenue 6 de Diciembre, just a short walk (or Ecovia trolley ride — the stop is Casa de la Cultura) from the center of La Mariscal.

Check out a Motorbike Adventure in Ecuador at MatadorTV, and meet our destination expert for the country.

Tagged
Culture Quito, Ecuador
What did you think of this story?
Meh
Good
Awesome

5 stunning Quito viewpoints not to be missed

This week is Semana Santa, one of the wold’s most vibrant religious festivals

11 places where you will feel absolutely dwarfed by nature

Dionisios: The only drag bar in Quito, Ecuador