I HAD TAKEN my gloves off for about 30 seconds to adjust my camera, when I realized that although the settings were changing, I couldn’t feel the finger that was changing them. It was damn cold, but what do you expect it to be like in the polar bear capital of the world?

For a brief few weeks every fall, Churchill, Manitoba becomes a bustling town full of eco-tourists who come to watch polar bears in their natural habitat. The bears descend on Churchill from surrounding areas as they wait for the Hudson Bay to freeze over. Once the waters have frozen, they walk out onto the ice and hunt seals for the next six months, but before that, they spend a few weeks lounging around and conserving their energy in anticipation of the ice’s arrival. 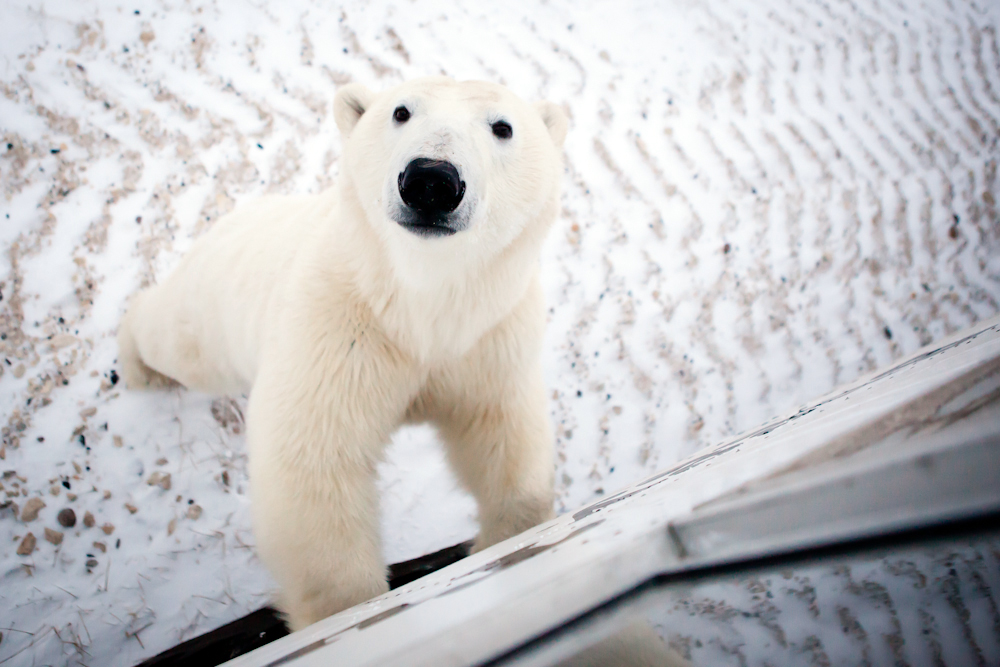 It was around 9am and the Tundra Buggy Lodge, our point of departure, was still visible through the right-hand side windows, a stone’s throw away. In the two hours since we left the lodge, we’d made it about 50 feet before we encountered our first polar bear. A small female walked curiously around our vehicle and repeatedly gave us “buggy love,” a phrase that describes when a bear stands up on its hind legs and pushes its paws up towards the windows to take a sniff and have a better look at what’s going on inside.

“Bears sparring, 3 o’clock!” shouted Hayley, our polar bear tour guide, after sighting another face-off taking place. I yanked my head back through the window and rushed to the opposite side of the tundra buggy, nearly tripping over my tripod in excitement and having my own face-off with the floor. I managed to make it to the window unscathed and peered out to watch two of the largest carnivorous mammals on land wrestle each other to the ground.

Two male bears had awoken from their slumber and were sparring — a playful act of wrestling, but one that prepares the bears for later battles that will establish mating rights. What looked like the most ferocious bite I’d ever seen was apparently only a “playful nip,” one I would not like to be on the receiving end of. The two continued to jab and pound on one another for an intense few minutes. Then, almost as soon as it started, it was over…the bears were exhausted. Overheated, they lay flat on the snow to cool their core temperatures.

For my entire time on the tundra, this view was the norm. Watching these immense creatures in their natural habitat is something you can’t quite believe you’re actually seeing. I constantly found myself saying, “This is like watching an IMAX movie,” except this wasn’t a movie, and it wasn’t a zoo. This was real life…this was the polar bears’ backyard.

Tagged
Travel Manitoba, Canada
What did you think of this story?
Meh
Good
Awesome
✖
travelstoke
Download the mobile app
stoked by