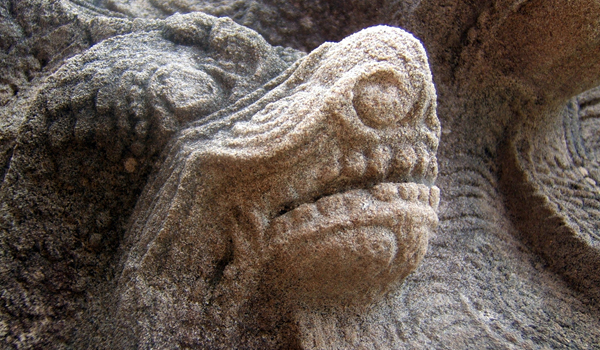 Photo by timparkinson
While Halloween is not widely celebrated in Thailand, Bangkok brims with otherworldly character.

From the subtle to the macabre (and the downright quirky), here are seven things to check out should you find yourself here on October 31, craving fright or fun.

Spirits are everywhere, and it is readily apparent that animist beliefs and superstitions color everyday life for Thais, a majority of whom are Buddhists.

Every home or building has a dollhouse-sized shrine on its premises, ranging in style from traditional Thai architecture and ornate kitsch to modern minimalism.

Regardless of form, the shrine serves as an altar for gifts to appease guardian spirits of the land. Aside from offerings of fruit and flowers, it is not uncommon to see figurines of people and animals, carbonated beverages, and model cars inside the shrine.

It’s widely known that accidents or bad luck afflict those who fail to acknowledge the rights of the supernatural beings who rightfully dwell on the grounds. 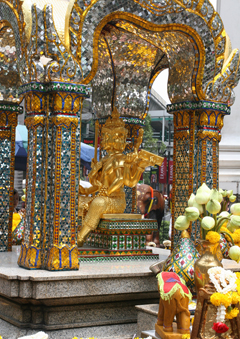 Hidden on the manicured grounds of the Nai Lert Park Hotel (BTS: Chidlom Station) is the shrine of Chao Mae Tubtim, a female fertility spirit.

Piled with hundreds of phallic offerings, from realistic wooden carvings to stone sculptures that stand ten feet tall, this unusual display may make you snicker or blush.

Women seeking to conceive leave offerings of jasmine garlands or lotus buds, and if their wish is granted, return to place yet another phallus in gratitude.

Sexual imagery is not uncommon in Thailand. These particular phalluses or lingams originate from the Hindu god Shiva, and are commonly associated with protection and good luck.

Lurid, gruesome, and horrible are words that best describe the exhibits at Siriraj Hospital’s Medical Museum.

A combination of six museums, including ones dedicated to anatomy and forensic science, the building houses organs with stab or bullet wounds, the intricate web of an extracted nervous system, and diseased body parts, including an elephantiasis-swollen testicle.

The Museum’s most sinister exhibit is the moldering corpse of Si-Oui, a notorious serial killer and cannibal from the 1950s. Hanging vertically in a glass case, his darkened, waxy, and naked body seems almost unreal.

Perhaps the most heart wrenching are the conjoined twins, stillborns, and infants with deformities. True to Thai spiritual beliefs, locals leave offerings of candies and tiny plastic toys for the babies.

To get here, take the Chao Phraya River Express Boat to Rot Fai (also called Bangkok Noi) Pier on the western side of the river. 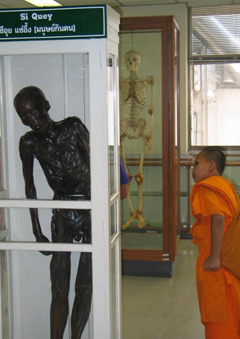 Sometimes lore becomes larger than life. In the case of Mae Nak, the fierce spirit of a devoted wife who died in childbirth gradually acquired the ability to reveal winning lottery numbers.

At Mahabut Temple (BTS: On Nut Station), devotees light candles, place garlands, and offer artifacts of daily life, including toys, diapers, and cosmetics, in front of a gold-encrusted statue of a mother holding a baby.

As they lie on the floor, Mae Nak eyes a flickering television, presumably watching her favorite program.

Nearby, others rub oil on the tree under which Mak Nak is buried, seeking winning numbers in the swirly patterns of the trunk. Not surprisingly, lottery ticket vendors and fortune tellers hover nearby.

Hell on earth, literally, is a 90-minute drive outside the city, towards the beach town of Bangsaen. In the gardens of Wang Saen Suk Monastery, garish sculptures of an emaciated male with a drooping tongue and a frightful female with a swollen belly and sagging breasts loom overhead, representing sinners.

Twenty or so life-sized figures join these unsavory characters. Each undergo some sort of punishment, including being sawn in half, smashed between giant clamps, and boiled in vats.

Make merit, in the form of a donation to the temple, for a better chance of avoiding such fates in the afterlife! 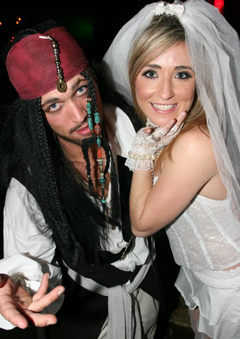 The Erawan Shrine (BTS : Chidlom), with its four-faced Brahman idol, is a long favorite of Thais and foreigners, especially those from East Asian nations. The shrine was built in 1956 as part of the adjacent Erawan Hotel to correct construction site mishaps.

Today, heady incense thickens the air as worshippers exchange marigold garlands and small wooden elephants for the granting of wishes.

In 2006, a mentally ill man smashed the hollow statue and sadly, enraged bystanders subsequently beat him to death.

Many took this as a bad omen. Government critics charged that the destruction was a plot by embattled Prime Minister Thaksin Shinawatra to maintain power through black magic.

Relating to spirits of another kind, Halloween has become another occasion for fun-loving Bangkokians to host boisterous celebrations.

Several Matador Community members recently got together for an evening out on the town in Chiang Mai – here’s Stu’s blog about the event, or Ross Borden’s post about the night the two Matador co-founders hit the town in Bangkok.

Matador members are making connections all around the world. Join the community today!

Tagged
Culture Trip Planning Thailand
What did you think of this story?
Meh
Good
Awesome