In September, 1768, Prithvi Narayan Shah, the king of Gorkha Kingdom in what is now central Nepal, was perched at the lip of the Kathmandu Valley, preparing himself for its imminent vanquishing. For weeks, the Shah and his 20,000 troops had been slowly choking off the city by blocking vital trading routes in the surrounding hills, and, hanging at the roadside, catching smugglers bringing in supplies. Finally, as many as 60,000 households in the valley below were on the brink of famine and would be unable to hold out much longer.

The Shah sent his troops to infiltrate the perimeter of Kathmandu, where, the story goes, women stood at their windows and tried to fend off the invaders by dumping water laced with chili powder on them. Men took to the streets to try their hand at direct combat. The efforts were in vain, and the king of Kathmandu was forced to flee the city. Not long after, the Shah also conquered the valley’s two other city-states, Lalitpur and Bhatkapur. It was 1769, and Kathmandu Valley was officially under Gorkhali rule.

As history usually smiles on the victors, today Prithvi Narayan Shah is one of the most celebrated figures in Nepali history. His successful campaigns in the valley and beyond unified rival kingdoms for the first time into a cohesive nation that would ultimately become Nepal. Up until the early 20th century, the country was known as Gorkha Rajya, or Gorkha Kingdom. What is today called the Nepali language was once Gorkhali.

These days, Prithvi Narayan Shah’s palace still stands in the town of Gorkha, 140 kilometers west of Kathmandu. The town was the kingdom’s capital until the Shah moved it to Kathmandu upon the city’s conquering. Curious to trace Nepal’s history back to its roots, my friend and I set out for Gorkha, a five-hour bus ride from the city.

Gorkha is a good escape from Nepal’s tourist trail, and is an easy side trip if you’re traveling to Pokhara. The town is approximately halfway between Kathmandu and Pokhara, 24 kilometers north of the Privthi Highway.

If you’re departing from Kathmandu, head to Kalanki in the southwest part of the city and find any bus or micro heading to Pokhara, or at least to Abu Khaireni. These buses leave frequently throughout the day, but get there early just in case. The journey takes about four hours and costs about NPR 200*. Get off at Abu Khaireni, which is where the road going to Gorkha breaks off from the main highway. From there, catch a bus heading up to Gorkha; the ride is about an hour and will cost around NPR 50.

It’s possible to book a seat on a direct bus leaving from the New Bus Park, but often just hopping on a bus in Kalanki gets you there just as quickly.

If you’re departing from Pokhara, find any bus leaving for Kathmandu and get off at Abu Khaireni, about a three-hour ride.

To return from Gorkha, go to the bus stand at the top of Gorkha Bazaar. There are three daily buses to Pokhara, and 10 to Kathmandu. 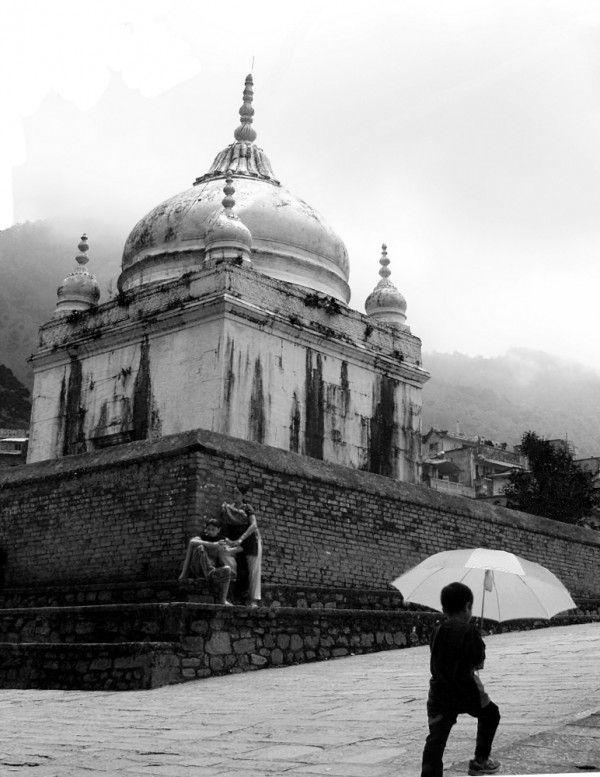 Our journey began as Kathmandu traffic gave way to green hills, and we passed villages with mud and thatched-roofed houses, their distinctive and warming smell — odors of livestock, smoke, and human sweat — pressing itself into the crevices of our vehicle.

Eventually we arrived in Gorkha Bazaar, a busy street jammed with shops selling electronics, jewelry, and clothes from China. “Is that the palace?” my friend asked, pointing up.

Yes, everyone in town confirmed, that’s the palace up there. 1,500 steps up.

Gurkha Inn is easily the best hotel in town. It’s just off the main road, and unlike the majority of accommodations has the advantage of facing out over the valley, so on clear days the place gets views of the surrounding hills. The hotel also has a garden and patio area.

Be careful, though — some rooms are dark and damp, so make sure to look at a few before you settle. Expect to pay NPR 1000 for a double room.

I liked the fact that the palace lorded over its kingdom in this way, seemingly powerful, remote, inaccessible, omniscient. It reminded me vaguely of Kafka’s castle, and felt appropriate as the home of the country’s conqueror. We peered up at it, small and insignificant. I wondered if the Shah ever got lonely up there.

The next day, we set out for the palace. We passed through the older part of the village, cobblestone streets and old shrines. “Which way to the palace?” we inquired as we came upon people. “That way, up,” was the inevitable response. It wasn’t long before we found the stairs that led to the palace.

Getting to Gorkha Durbar

On the right-hand side of the bus stand at the top of Gorkha Bazaar, there’s a cobblestone street slanting slightly uphill towards the Tourist Information Office. Take the street and follow it as it snakes right around the white Mahadev temple. You’ll end up at a square with the Gorkha Museum on one end and a trail map on the other.

The trail up to Gorkha Durbar is just a little farther down on the right-hand side from the map. Then begins a steep, hour-long ascent uphill. The walk up can be tiring, but there are plenty of small tea shops along the way if you need to stop and rest.

As we climbed, the sun pinned us vindictively under its thumb. It was also exceptionally humid, and as we got higher, I began to feel increasingly exhausted and dizzy. I assumed hallucinations had gotten the better of me when I began to see drops of blood splattered across the path. Then there was more blood, and people carrying large rice bags dripping with blood. We came upon a headless goat laid out beside the path; its owner was skinning the carcass. It seemed to be sacrificing day — not a good day for goats.

After about an hour of steep ascent, we reached the palace. 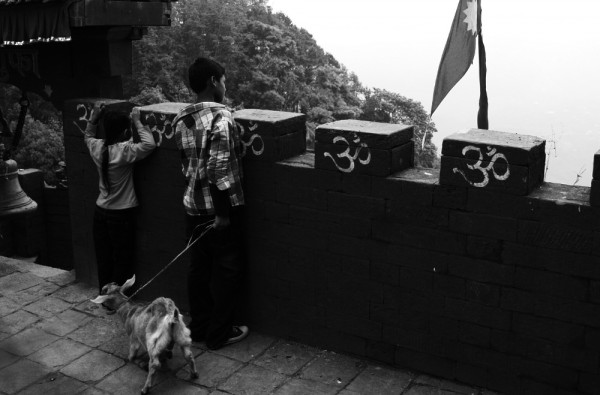 Goats were scattered across the palace’s premises. On the half-moon day of the lunar month, as well as other important dates, villagers bring their goats, chickens, and buffaloes for sacrifice to the goddess Kali, the destructive incarnation of Lord Shiva’s consort, Parvati. Inside the temple, I watched as a priest stood over a goat and swiftly beheaded it. His smoothness and speed was impressive.

While Gorkha Durbar is open all year round, the best time to go corresponds with Nepal’s trekking season, from October to May. Often, from June to September, the weather can be hot and humid, and the monsoon clouds obscure any view of the surrounding mountains. The winter months can also be chilly, although there is relatively uncommon.

The other main attraction for visitors in Gorkha is the palace museum, which holds artifacts and paintings from the days of Privthi Narayan Shah. After meandering around the ridge and exploring some old forts that are now occupied by the army, we made our way back down to the town, where the museum is located. When we tried to enter, a guard stopped us. “The museum is closed today, and tomorrow and the next day too,” he said unsympathetically.

We were leaving the next day for Kathmandu, so the museum would have to wait until next time. We left, walking down the cobblestone streets, and I looked back up in the direction of the palace, imagining Privthi Narayan Shah looking out over his kingdom many centuries ago. 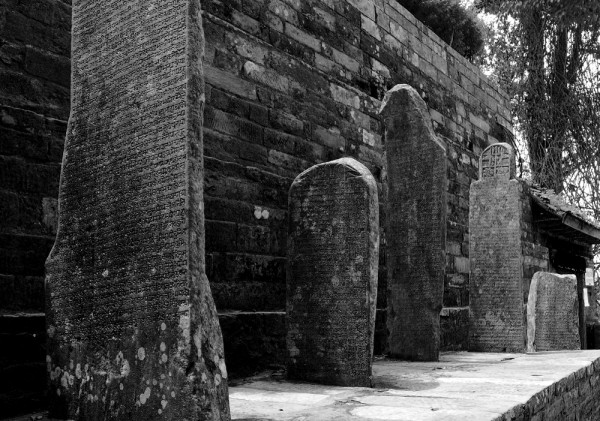 On the north side of the palace are stone edicts erected in honor of Privthi Narayan Shah.

What else to do in Gorkha

Gorkha Durbar is the town’s main attraction. However, there are other sites in the area worth exploring. Although it was closed when I passed through, the Gorkha Museum sounds cool. The building itself is beautiful, another Newari-style palace built in 1835. Inside, there are artifacts from the era of Privthi Narayan Shah — cannons, rifles, arrows, spears, even his throne.

On the top of the ridge to the northeast of Gorkha Durbar is Upallokot, an ancient fort. The trail leading to the fort winds through quiet forest, past modern army barracks. It’s a small and relatively unremarkable structure, but still an interesting piece of history.

Just above the bus stand in Gorkha Bazaar is Ratna Temple, the now unoccupied residence of Nepal’s last king. Around the area is also a variety of small temples.

Tagged
Budget Travel Insider Guides Nepal
What did you think of this story?
Meh
Good
Awesome