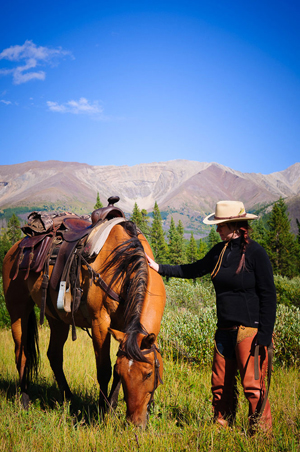 I DIDN’T TELL HER I was afraid of horses. I didn’t tell her I hadn’t ridden a horse since I was three, and I didn’t tell her that I’d been thrown from the saddle into an electric fence. When Kelly Laver, the Travel Alberta rep that organized my trip, suggested Holiday on Horseback’s “Paws in the Wilderness” experience, I simply agreed and headed to Banff.

I also failed to mention that I hate all aspects of cowboy culture: Country music and two-step can go to hell. The board-approved packing list called for Wrangler jeans and a cowboy hat. I took my Gore-Tex hiking pants and a baseball cap.

When I showed up at the stables, I’d never felt so far outside my comfort zone. Everybody else strode around confidently. They had their own saddlebags, and they latched them onto their horses before climbing into their saddles. When our guides, Mark and John, introduced me to my horse, KC, I didn’t even know how to mount him.

When I finally got on board, KC and I moved at two different rhythms, and the mixed melodies were painful. By the end of the day, my knees were sore, my butt hurt, and my lower back begged for a chiropractor. Thankfully, camp life wasn’t nearly as rustic as advertised. Hell, I’d call it five-star considering its remote location.

Sure, flush toilets and hot showers were absent, but in their place were tidy outhouses and outdoor washbasins. Whenever the dinner bell rang, we made for the cook tent, where we found hearty ranch-style meals of roasted ham, turkey, and beef, and breakfasts were flapjacks, eggs, bacon, and toast. The nights were cold — temperatures dropped below freezing — but it was easy to stay warm inside the canvas tents because each camp sold beer and whiskey for $3.50 per drink.

Our route followed the Cascade Valley, and we were on the trail of the Cascade wolf pack. Wildlife ecologist Melanie Percy developed the Paws in the Wilderness trip to coincide with the World Wolf Congress hosted at The Banff Centre in 2003. Now in its 10th year, the itinerary still focuses on educating guests about wolf biology, denning, and predator-prey relationships. Everyday, we rode through prime wilderness for 2-3 hours, stop for lunch, and continue for 3 more hours before arriving at the next campsite.

Melanie’s knowledge of wolf social dynamics made her the de facto alpha female in our group. She’d inhale deeply and let out three consecutive howls that made our neck hairs stand on end. “To track wolves, you need to cover a lot of territory. When we howl, we can confirm if they are close.”

So we howled. Melanie encouraged us to join in a louder group call, hoping to draw a response from any nearby wolves, but our baying sounded weak next to her clear voice. We had the wrong pitch and pace. Half the group flatly refused to participate, and I stopped howling before everyone else out of self-consciousness. We never heard a wolf call back.

Before sunrise on the third day, we stood on a ridgeline above Flint Park Campsite for another attempt. We each took three deep breaths and let out a booming group howl.

Instead of a response from wolves, we scared a grizzly bear and her cub into a breakneck run. Melanie pulled out her telemetry gear — a handheld antenna and radio receiver — and locked onto the bear’s signal. It was grizzly bear #131, who’d been tranquilized and collared in June, and her first-born cub. The gear confirmed grizzly bear #135 and her three yearlings were also between us and our campsite.

Although we were halfway through our 5-day horseback trip, this was our first wildlife sighting. Our entire group — 12 people, 13 horses, and an ornery mule named Ruth — made too much noise for chance encounters.

Instead of live sightings, we were treated to Melanie’s stories from summers spent tracking wolves in the Cascade and Bow Valleys. One male, named Ben, was so gentle he was often left to guard the pack’s new pups while the females went to hunt. Another, Raven, she claimed as her favorite. He was very bold and left the Bow Valley pack to try and supersede the alpha male in the Cascade pack in a fight that left him bloodied and defeated. Although he returned to the Bow Valley, it was a temporary stay. He eventually left the park and became top dog in a pack near Sundre, Alberta.

By the end of the trip, I’d learned plenty about being a cowboy, too. On the final day, KC and I moved in sync. My butt, knees, and back had adjusted and I rode in comfort. When we stopped for our last lunch, I slid off KC’s back and flipped the stirrups over my saddle, loosened his cinches, and clovehitched his reins to a highline. After I ate, I snuck him a leftover apple before retightening his saddle and swinging my leg over his back.

With a quick kick to his sides, we rode off towards the trailhead. 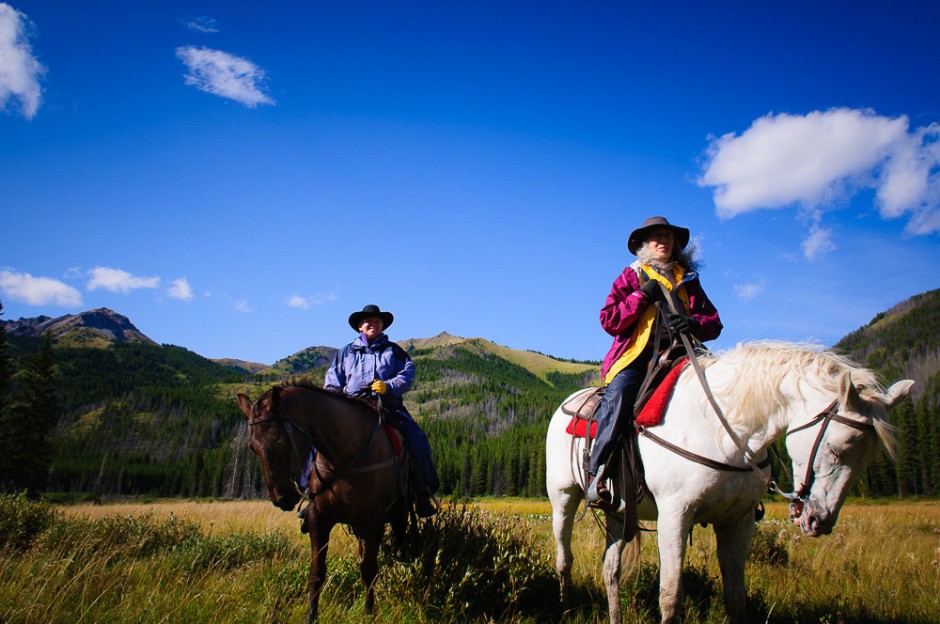 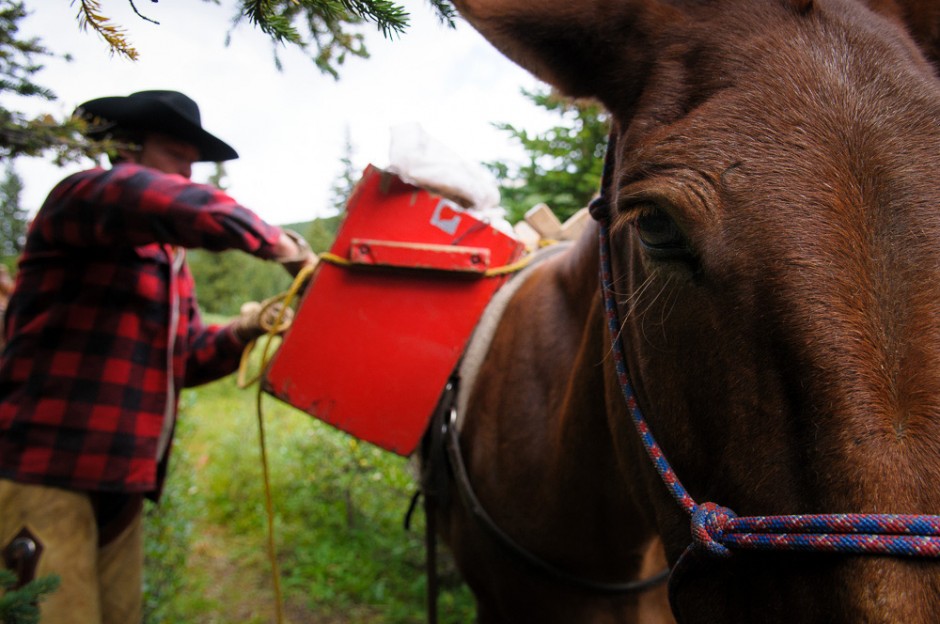 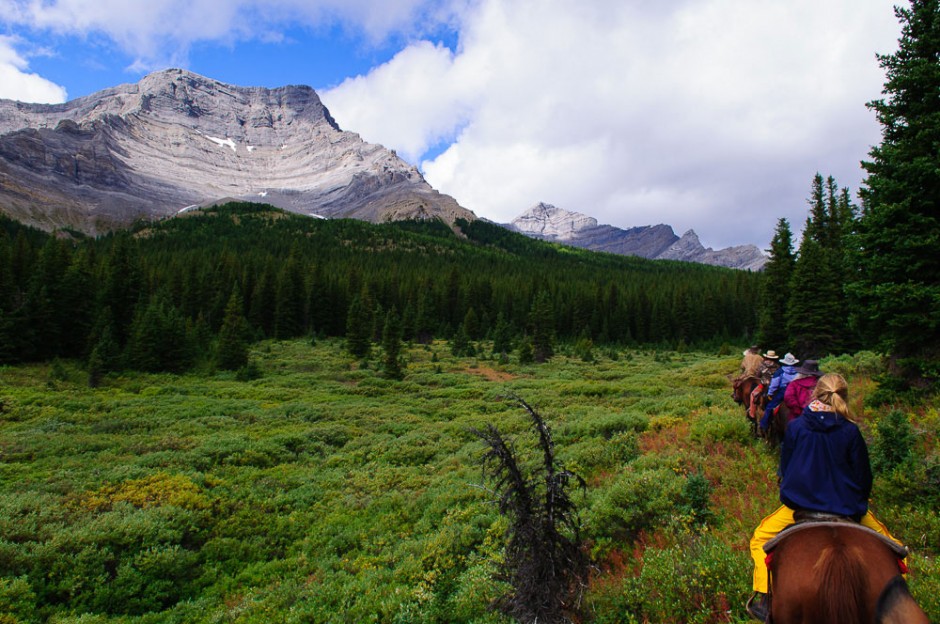 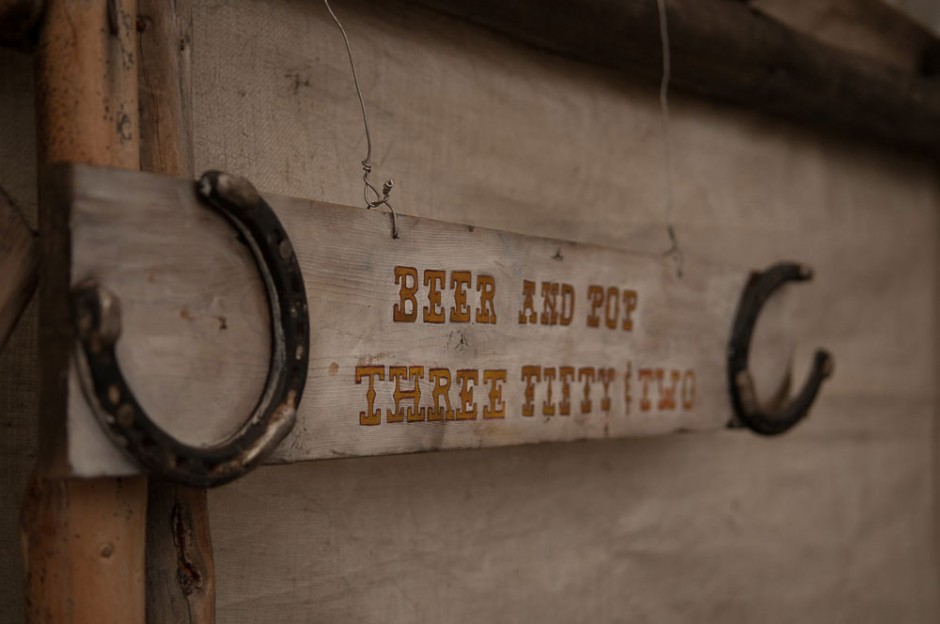 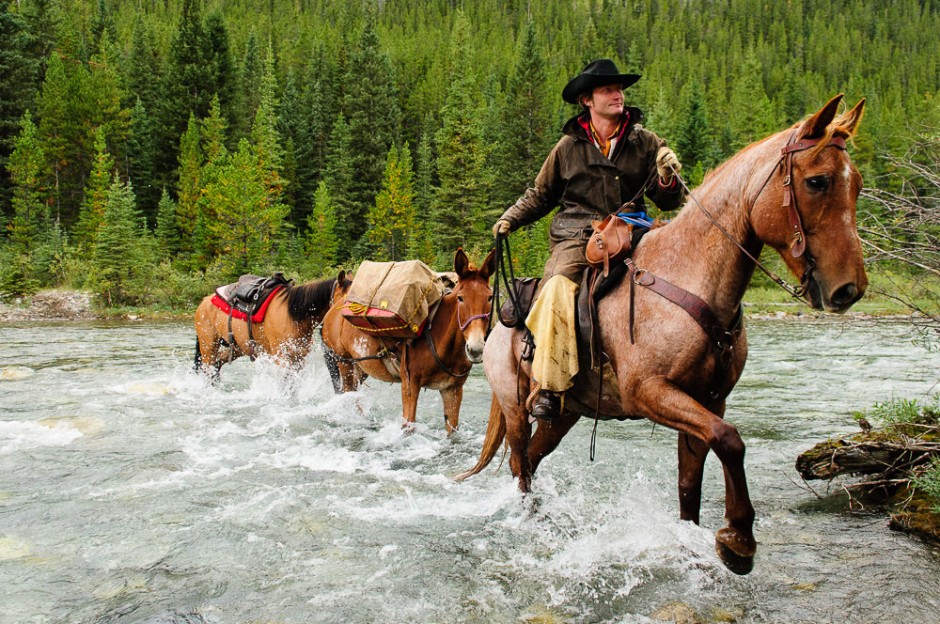 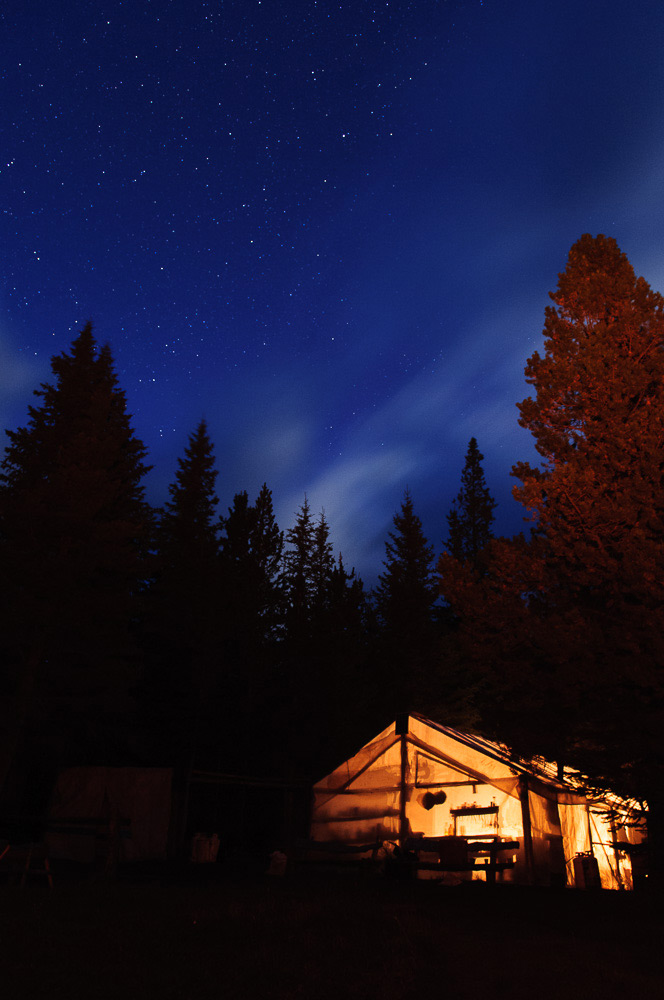 Tagged
Hiking National Parks Banff, Canada
What did you think of this story?
Meh
Good
Awesome
✖
travelstoke
Download the mobile app
stoked by