A LOT OF PEOPLE have heard about Pitcairn — very few have actually been there. The island, a craggy black rock in the middle of the South Pacific, is one of the most difficult places to visit on Earth. Halfway between Peru and New Zealand, it’s only accessible by boat. The closest airport is on Mangareva, in the Gambier Islands, 330 miles away.

If you’re lucky, the weekly flight scheduled to the Gambier Islands from Papetee, Tahiti is running…but it’s probably not. From Mangareva you can catch a multi-day ferry to Pitcairn…sometimes. It’s too far away for any land-based helicopters to reach and too rugged for any airplanes to land on. Hell, if there’s a swell running or rough weather, you can’t even get there by boat. You won’t be able to anchor or come ashore, as there are no good harbors or bays; jagged lava rock, reefs, and tall cliffs surround the entire island. 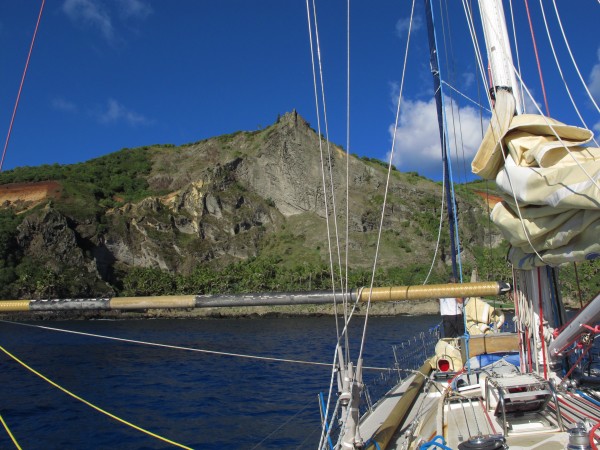 For the mutinous crew of the HMS Bounty in 1790, Pitcairn was perfect. Satisfied they had reached the middle of nowhere, they burnt Her Majesty’s ship in what passed for the only bay, and along with a handful of Tahitians who were onboard they set about the business of living on the island and hiding from Her Majesty’s wrath, while hoping, quite literally, to drop off the map. They would have gotten away with it too. Unfortunately, they couldn’t all get along — apparently the mutineers were a drunk and violent bunch — and within a few years all but two of the men were dead.

An uprising by the Tahitians, the Britons’ retaliation, murder, disease, and falling off a cliff while drunk were the main causes of death. The last two men standing found God, and the islanders lived peacefully off the map until Pitcairn was rediscovered 24 years later. By that time only one of the original mutineers was still alive and the island was promptly turned into a British territory, the only one in the South Pacific.

Chances are Pitcairn Island sounds vaguely familiar to you. A couple of books have been written and films made about Captain Bligh, Fletcher Christian, and the “Mutiny on the Bounty.” And in 2004, a child sex abuse scandal on some faraway island where descendents of 18th-century mutinous sailors lived was picked up and raptly covered by the world’s media, from the New York Times and NPR to the London Times and Sydney Herald. Six men were found guilty in 2005 after “one of the most bizarre criminal trials in British history,” and a jail was erected on Pitcairn where the convicted are currently serving their prison sentences. 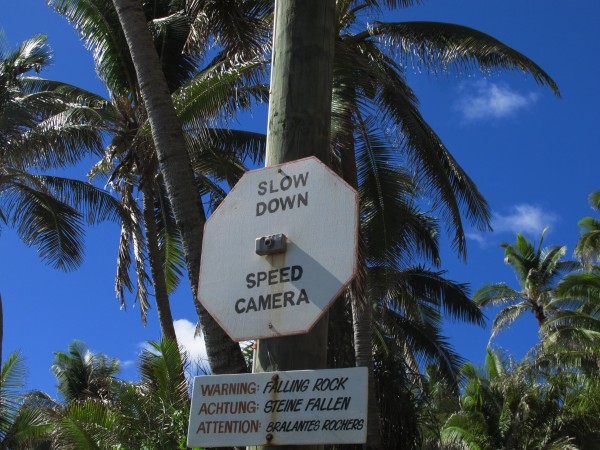 This nefarious background, along with Hollywood’s unrealistic rendering of events, is all I really knew about Pitcairn as the sailboat I was aboard approached it. A private sailboat is really the only “practical” way to get to Pitcairn, due to its location as a midway stopping point between Rapa Nui (Easter Island) and Tahiti. None of us had ever been there before, and I had no idea what to expect from an island that obviously understood how to keep its secrets. I also knew that I wanted to get off the boat, badly. After two weeks at sea, any land will do. I didn’t care whether or not it’s full of the lecherous descendents of marauding mutineers.

But you can certainly imagine the slight unease the rest of the crew and I felt as we dropped anchor and a large boat roared toward us full of islanders. The locals had seemed friendly enough during radio communications, and after a few crass jokes along the lines of “hide the women!” a flat-decked longboat with a monstrous 400-horsepower diesel engine pulled up alongside. Only one of them looked like a pirate, with a black skull-and-crossbones do-rag covering his long greasy hair, a couple of gold teeth, some missing teeth, a large belly, and tattered shin-length pants, wearing Crocs. His name was Pirate Paul and a few of the crew would end up drinking tequila out of a whale’s tooth with him. The other islanders ranged from plump pale British and skinny Kiwis to heavy-set Polynesian and most shades in between.

Man, were they happy to see us. Clamoring to shake our hands and give us hugs, welcoming us to their island, and slapping us on the back, they were all so friendly — often to the point of awkwardness. They spoke with a strange mix of British accents and old sailor slang. Wut-a-way meant “hello,” “how are you,” and “nice to meet you.” After wobbling ashore on our sea legs and filling out the ornate customs forms (I have to admit, a Pitcairn passport stamp is pretty cool), we walked up “the hill of great difficulty” and were escorted directly to the treasurer’s office where we paid the $100/person visa fee required to visit Pitcairn and the island’s 50-some inhabitants, 48 of which are direct descendents of the original crew.

There was a small museum, which cost five bucks to enter. There’s also a post office, and they even have their own stamps. I sent two letters and was assured they would reach the U.S. by August. It was April. One of the little boys hovering around our group challenged one of the crew’s pretty girls to an arm wrestling match. She won, but he became our buddy and de-facto tour guide. We were all given maps and then set loose. There are two cars and one town on the island; you can pretty much walk everywhere, although most locals prefer to ride their 4×4 ATVs. 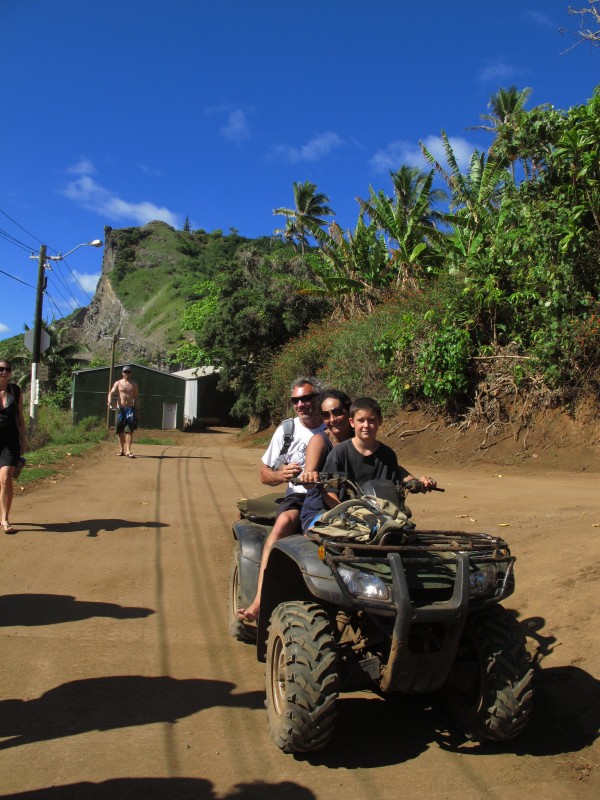 The preferred method of transportation among the island's citizens is the ATV.

It took about 30 minutes of exploring to realize that this island really is a pirate’s paradise. Single-track jungle trails lead to hidden caverns, large banyan trees are there for the climbing, and a steep hike up to Christian’s Cave offers a sweeping view of the cobalt blue Pacific. There’s an old Galapagos tortoise on the island as well named Mrs. T (originally it was Mr. T, but on closer inspection, the Mister was a Missus). She’s really old and nobody’s sure how long she’s been around or how she got there in the first place.

There are no real restaurants on the island, just private homes, and if they like you — and I think they like just about every visitor as long as they have money and promise to leave — they’ll invite you in and cook you a delicious lunch for the bargain price of 20 bucks. Believe me, after two weeks on a sailboat, that lunch, which includes a cold beer, fresh fruit, veggies, and meat, is the best 20 dollars I’ve ever spent. 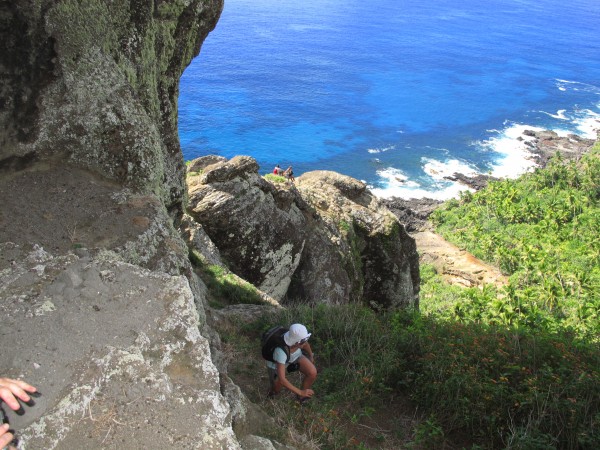 The steep rocky trails and hidden caves of Pitcairn.

We went snorkeling in Bounty Bay and touched the remains of that famous ship. We swam with a couple of sea turtles and a bunch of fish as we circled One Palm Island, thus named because of its solitary palm tree. Go figure. Some of the crew got drunk with Pirate Paul and his whale’s tooth and a few others walked to the end of every road on the island, which took a couple of hours, and others spent their entire time on land foraging for things like taro root and fresh bananas, knowing it was at least another 10 days’ sail to Tahiti. 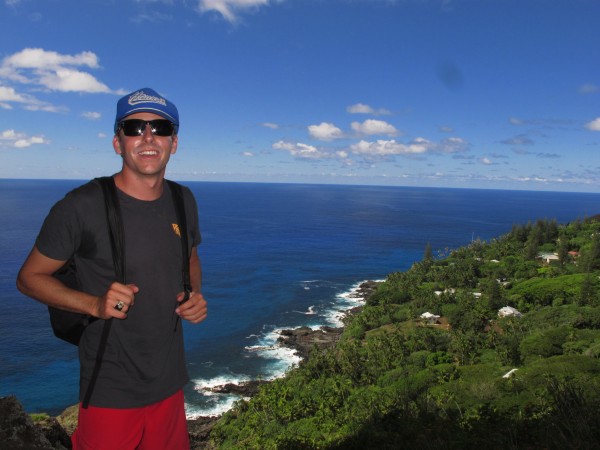 The author on top of Pitcairn with 10 more days at sea until landing in Tahiti.

At sunset on the second day, it was time to leave. Every single one of us had some funny story about an awkward encounter with a local, but they all wished us luck over the shortwave radio as they said goodbye to us and goodnight to each other. It turns out shortwave is the equivalent of the telephone on Pitcairn.

On the whole, the crew agreed that the Pitcairners were an incredibly friendly and hospitable bunch that had gotten somewhat of a bad wrap and were also a wee bit misunderstood…we also all agreed living there would get weird in a hurry.