THE WINTER IN Puerto Natales, Chile is long and unforgiving. I spent four months grateful for GoreTex and marking hours of darkness with a constant stream of caffeinated beverages.

Still, even in winter, it’s a mistake (one I saw most gringos making) to just pass through town, budgeting only a day or a few hours before bussing off to Torres del Paine.

If people do stay, it’s typically just to walk up the main roads a few times and around the Costanera. Maybe the tourbook-induced hysteria about walking into the wrong part of town in South America is in play, I’m not sure. Natales is safe enough that I once had an iPod I’d left on the bus returned to my doorstep by a stranger.

When you go, spend a few days, explore on foot, and get outside the paved roads of predictable, touristy downtown. This is Natales, al natalino.

Most of the fresh food in Puerto Natales comes from the once-weekly arrival of the Navimag ferry from Puerto Montt, and in the winter there can be blockages of the trucking routes supplying it, leading to a picked-clean produce section at Unimarc.

Luckily, due partially to park and Navimag traffic, the town has a fairly large selection of eateries for its size, and Natales has even been gaining something of a “foodie” reputation. El Living is Lonely Planet’s darling cafe, but it closes in late March. While it’s homey and comfortable (and has some of the only vegetarian food I managed to find in the whole of Chile), Patagonia Dulce down the street has El Living beat on delicious desserts and coffee drinks.

If you want more than sweets and tea sandwiches, there are plenty of places to grab a completo (Chilean style hotdog) or choripapas (french fries served with bits of sausage on top), but a step up without being overwhelmingly expensive is Mesita Grande, a traditional Italian-style pizza place complete with a brick oven, located on the Plaza de Armas.

Finally, wander away from downtown up Chorillos, the street that I lived on, and find the little French bakery at the top of the hill before the main Avenida. The croissants go fast, so get there early in the morning.

I was struck by the modernity of the Unimarc grocery store from the moment that I moved to Natales, and as the months dragged on I became more and more disenchanted with it. Sure, they have Nutella (for about $12 an ounce) but it feels like every grocery store I’ve ever been to, not one at the end of the world. 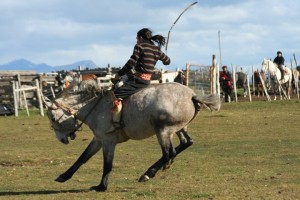 Horses have long been a part of Patagonian culture, and are a presence in Puerto Natales. The faja, or belt, is part of the traditional dress in the area.

If you want the a more localized Natales experience, shop at the fruterías (fruit stands) and Don Bosco, the supermarket with toilet paper stacked floor to ceiling on Baquedano. My host mom swears that their sliced meat is always fresher and cheaper than at Unimarc.

If you should find yourself in need of clothing, don’t go into the main outfitter stores, unless you feel the need to pay 3x what you should for that NorthFace jacket. Instead, buy from one of the many Ropa Americana stores (which is really just Chilean for second hand clothing). Worried about sizes? I’m six feet tall and female, and I had no problem.

A large part of the town’s industry comes from the sale of handicrafts, and there are plenty of these stores. I never bought anything from the stalls at the Etherh Aike Handicraft “Village” next to the high school, because their prices are often sky-high and their handmade crafts are often crocheted in acrylic yarn from China.

If you want a traditionally-made boina (the beret-like hat that gauchos wear in Patagonia), walk on the left side of Baquedano in the direction away from Unimarc. A woman sells them out of her living room, and normally has a selection hanging in the window on the left hand side of the street. She uses wool from sheep raised near Dorothea, the ridge running along the border with Argentina just outside town.

Maybe you want to celebrate surviving the 12-day circuit trek in Torres del Paine. Maybe you want to cut loose after three days spent in planes and busses to arrive. Partying in Natales is possible, but your choices are fairly limited due to the population. There are two (totally not worth it) discotheques, several bars that occasionally become dance halls after hours, and, of course, the cheapest option, the almacén (bottle shop) beer run.

I spent my time walking between Baguales microbrewery on the Plaza de Armas and El Ruperto on Manuel Bulnes, because these are the two best bars in town. The drinks are cheaper at Ruperto and the music is louder, but Baguales has excellent fries (megapapas, ‘nuff said), a no-smoking policy, and actual craft beer.

If you want to feel fancy in your new-to-you used clothes, head up to El Cormorant and sit in the panoramic bar with a Calafate Sour. If you’re lucky, you might be able to find a Groupon for a sushi happy hour there and stay within budget.

If you want a “true” experience of Patagonia at her most silent and empty, get outside the city of Puerto Natales by 45 minutes and stay in Hotel Rubens. Situated at a big bend in the road (yes, Route 9 is the only major road in the region), Hotel Rubens is the only landmark for miles between the small town of Villa Renovald and outskirts of Puerto Natales. It has simple rooms, some cabins, and a tiny cafe, but the real lure is the silence of the plains and the stars that come out in unbelievable numbers at night.

When booking your ticket with one of the bus companies (Bus Sur, Buses Pacheco, and Buses Fernandez serve this area), be sure to ask for a ticket to Hotel Rubens. It should cost slightly less than a ticket for the whole trip to Punta Arenas, and while they might look at you funny for a minute because this is a place unknown to many outsiders, they will indicate on your ticket “Seat XX gets off at Hotel Rubens,” allowing you to get off the bus at the right time.

Make sure you book a ticket for a bus to pick you up when your stay is over, as the buses are often full and you might have to stand in the rain for a long time if you try to flag one down without a reservation. (PS: Don’t try to google it. The maps are all inaccurate, even with GPS coordinates).

Tagged
Budget Travel Trip Planning
What did you think of this story?
Meh
Good
Awesome