My brother pausing for a breath while digging out a tent.

I’M NOT A SUPERSTITIOUS person, but something about the arctic makes me believe in magic.

It seems close to something that I can’t understand, the last stop before a bridge that I can’t see to a place I can’t go. Sacred in its power, the North is poetic and violent, humbling and invigorating and full of many other adjectives that can only be felt in order to understand. Perhaps it is in the magnetism of the place, a magnetic charge on which all direction is based.

The Far North is a land of mystery, of frozen oceans and the birthplace of the wind. No other direction can beguile you so easily with its immensity. For the North is not, nor has it ever been, ruled by mankind…and there is something enchanting about that. 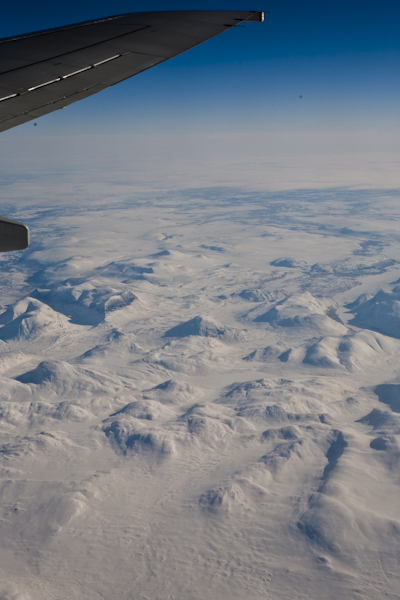 Looking out the window towards the North Pole as we began our descent into Longyearben, Svalbard. 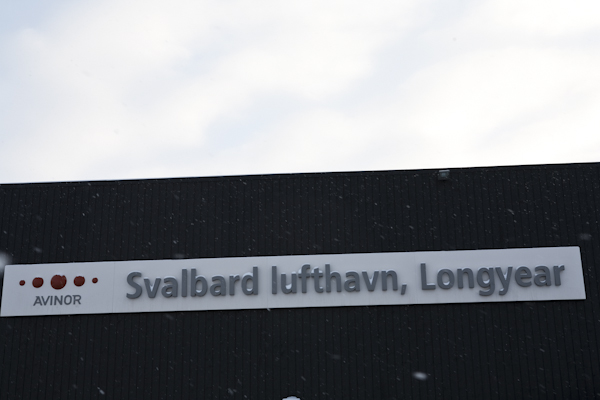 At 78.22 degrees north, Longyearben is the northernmost settlement in the world. Once a rough and tumble frontier town at the edge of the world, Longyearben is now a bustling hub of tourism with nice hotels and international restaurants... the town has become more comfortable but as we were to find out the ice is just as inhospitable as it always has been. 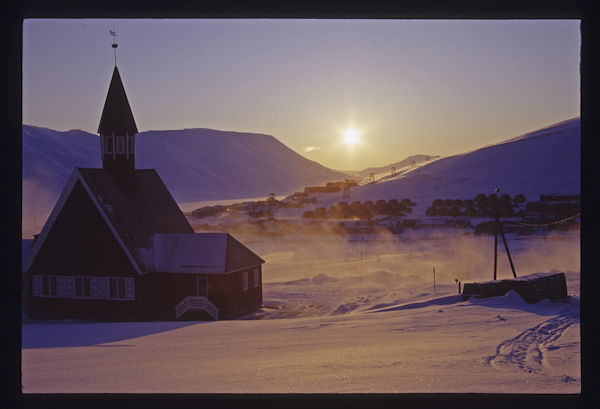 Our first morning in Longyearben the temperature was -45 centigrade... It is a cold that can not easily be described. Breathing air so cold sears the lungs and can cause frostbite to exposed skin in minutes. Ice crystals were just hanging in the air giving an even more ethereal look to the sunrise.

RV Family Adventure: How To Raise Your Kids on the Road 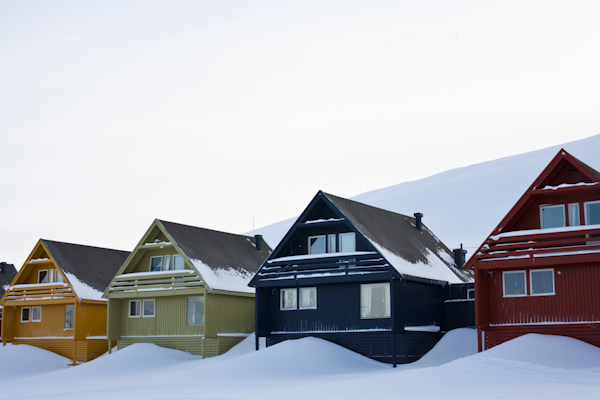 Color is inserted into a white world by the hardy residents of Longyearben. A tolerance towards the cold, easy smiles, and a reverence for the stark beauty they live within were common traits among Longyearben residents. 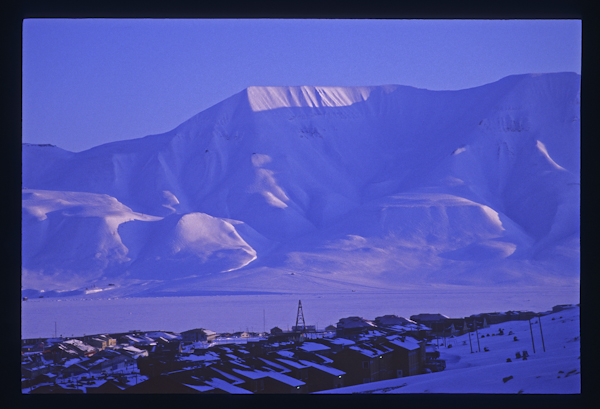 Dusk lasts for a long time in March this far north. Watching the sunset takes hours and the light show is spectacular. 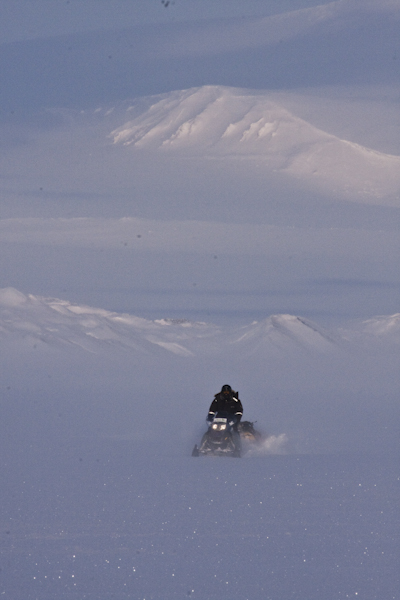 Leaving Longyearben behind on snowmobile, or a 'snow scooter' as the Norwegians call them, towing a sled of gear eight hours into a void of ice and snow, is a humbling experience and makes one feel very small. During the ride out to where our base camp was to be, nearly half of our crew suffered some degree of frostbite... my nose still has the scar. 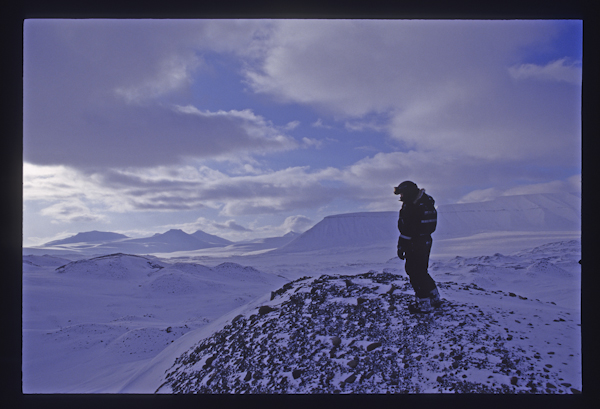 This is my brother staring out into the expanse of Arctic ice and sky... probably wondering what the hell we had gotten ourselves into.

RV Family Adventure: How To Raise Your Kids on the Road

Your Family Can Get Paid $1,500 Just To Sleep in a Tent in Your Favorite Campground 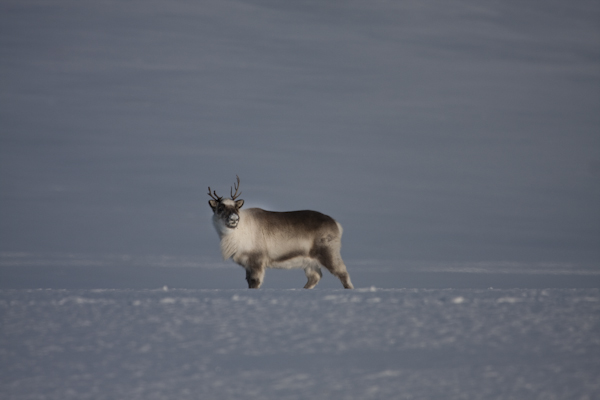 A young reindeer forages for moss and basks in the newly returned Arctic sun. The flora and fauna that thrive in such harsh conditions are incredible. 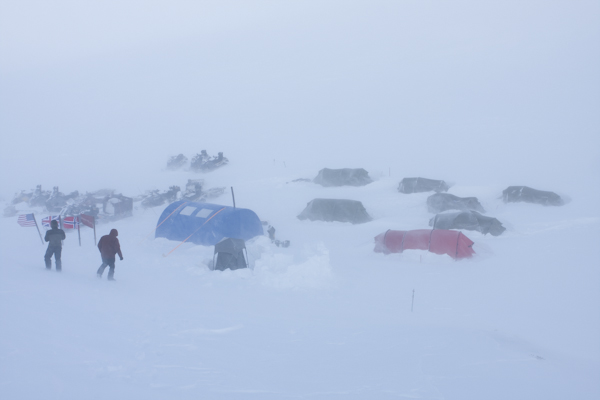 Our team managed to get base camp set up just as the sun set and the wind began to blow... this is the first morning of what would turn out to be a savage display of the power of Arctic storms. 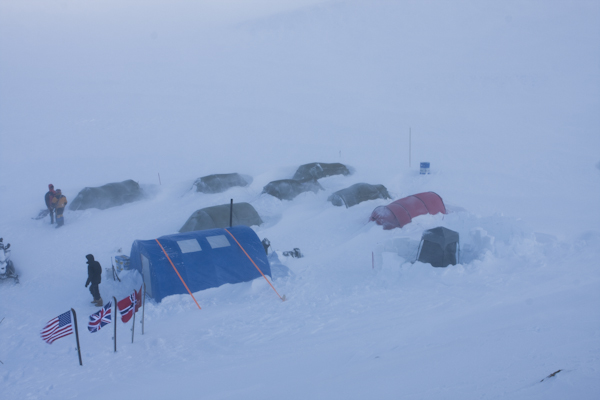 The wind howled at a consistent 50-60 mph for days on end. You can see the tents are beginning to get buried and we were constantly working to keep them dug out. The wind was shaking the tents so violently that sleeping required a precise mixture of the Norwegian brandy known as Aquavit and NyQuil... 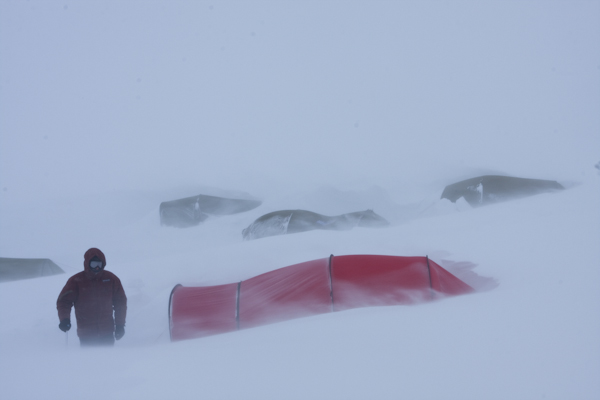 My brother pausing for a breath while digging out a tent. You can see several in the background that are nearly buried. A few hours after this shot was taken we were awoken out of our Aquavit/NyQuil haze to lots of yelling in Norwegian as two of the tents had collapsed under the weight of the drifting snow...

Your Family Can Get Paid $1,500 Just To Sleep in a Tent in Your Favorite Campground

The US Ranks Second in the World for Skinny Dipping 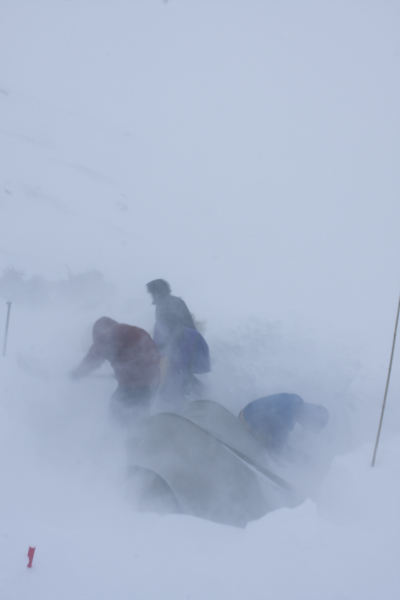 After locating the collapsed tents we went to work digging them out... This is Kitt, Tash and Mats at around 5 AM fighting the wind and snow in a losing battle. We ended up having to abandon digging during the storm and eventually found them under 3 feet of wind drifts when the storm finally cleared. 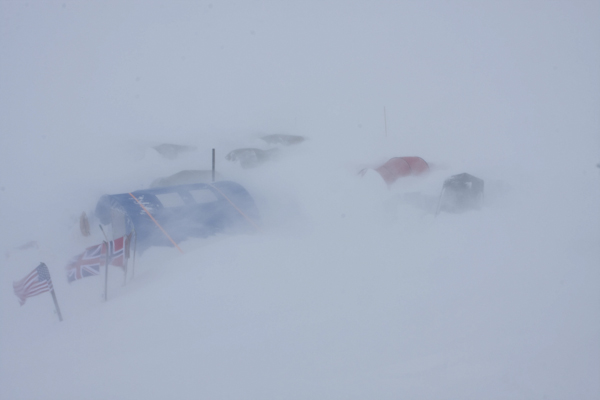 During the fourth night of the storm our group of 12 lost two tents under the snow. The unlucky occupants were forced to dig themselves out and seek shelter in the cook tent. This was shot in the morning just as we were about to begin probing for the tents as they were still full of supplies. 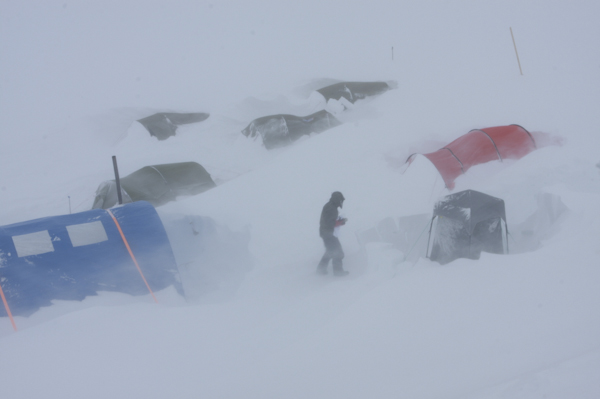 This is Kitt headed from the cook tent to the outhouse during the storm... Shitting in these conditions was a constant topic of discussion among the crew and all agreed that it was one of the most extreme things any of us had ever done. 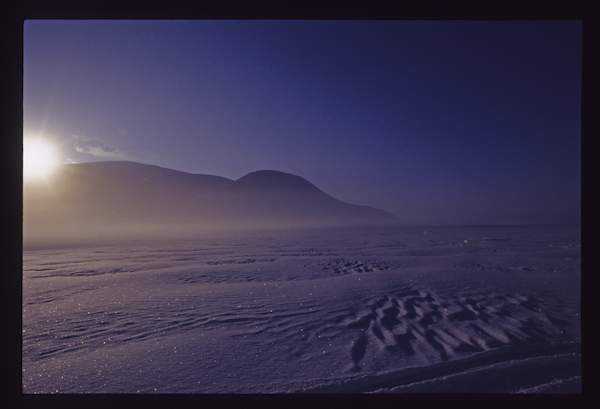 After 5 days of being battered by the elements we awoke to clear skies and a stunning landscape of snow and ice... you wouldn't know it but 12 'snow scooters' are buried under 3-5 feet of snow right here. We had to use avalanche probes to find them and it took us a full day to dig them out and get them running again. 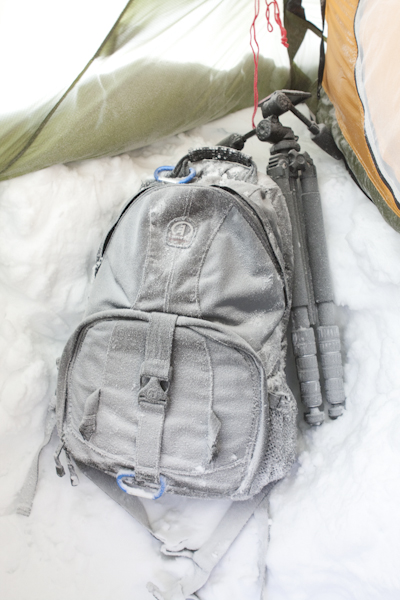 My camera bag couldn't be brought into the tent because of how quickly condensation could form and freeze on the lenses. This is what my bag looked like on the first clear morning... now if I could only get these zippers open. 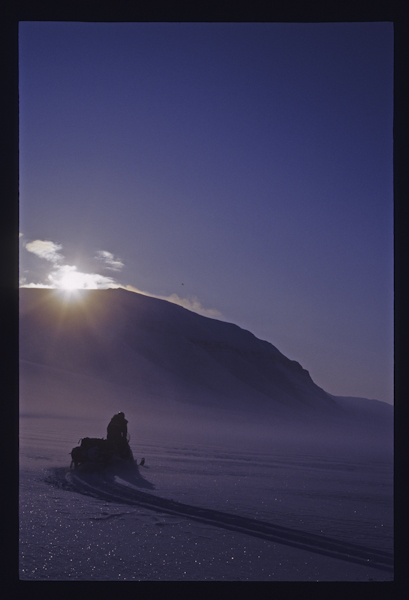 After 5 days cooped up in tents and another full day digging out we finally got to head out onto the ice in search of the polar bears we had come here to find... 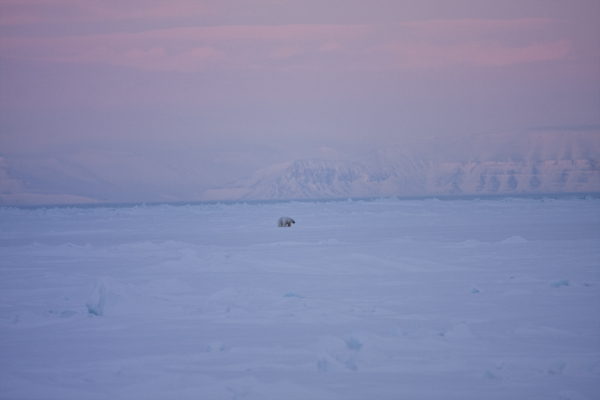 A large male polar bear stalks the ice at sunset in Svalbard. Unfortunately, we saw him about an hour after sunset and as there are strict rules in Svalbard about not approaching a bear... They are the only animal known to actively hunt humans and law requires a member of the party to carry a gun at all times when outside the town of Longyearben. We never got very close (this is shot with a 600 lens) so the pictures I was sent to get never happened. 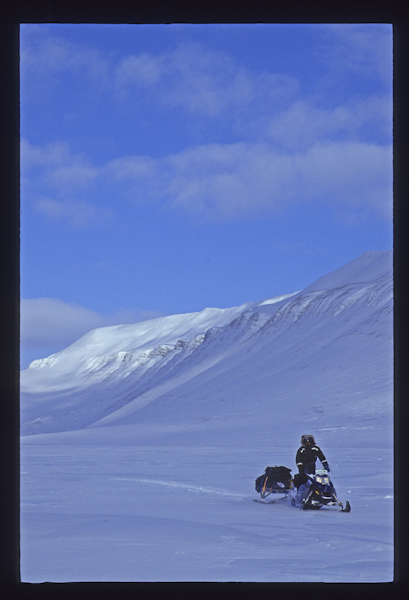 We were running short on supplies and got a forecast that was far from favorable so the team made the call to use this clear day to get out. Not the most successful trip... some might call it a skunking, but I certainly won't ever forget it. 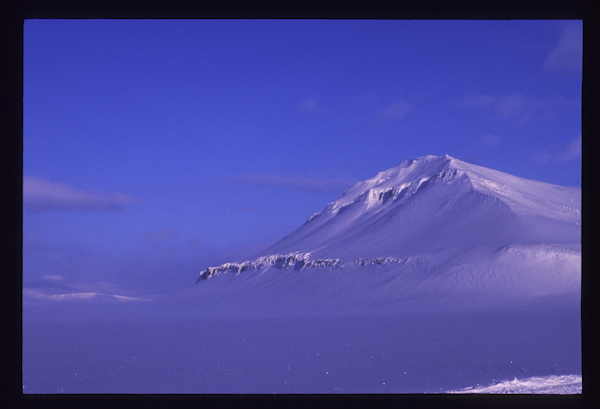 Kitt writes that the Arctic makes him believe in magic... I probably would have to agree with him 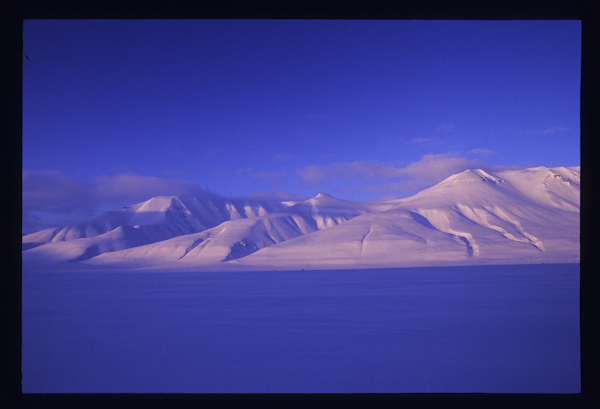 Arctic light has a weight and feel all its own.

Tagged
Camping
What did you think of this story?
Meh
Good
Awesome
News

Skiing the Northernmost Mountains in the World: Svalbard, Norway

The US Ranks Second in the World for Skinny Dipping

Everything You Need To Stay Warm and Cozy for Fall Camping

Solo RV Travel: Everything You Need To Know

This Small, Retro-Looking Car Is a Modern Hotel Room on Wheels