THE FIRST TIME I went to Iguazú Falls I was in love.

I had just fallen for a boy named Ed who promised me he would show me the world. In the end he did just that, but the trip to Iguazú was our first together. This is probably why I tell everyone who asks me about Argentina to visit Iguazú and the red province of Misiones.

There’s something ancient and magical about this corner of northern Argentina, tucked between Paraguay and Brazil.

The indigenous Guaraní people who populated these lands in pre-Columbian times left their spirit behind in the crimson earth, steaming jungles and raging river waters.

It was here that Ed and I discovered a part of Argentina we had never experienced before, even though both of us are native Argentines. Our trip to Misiones opened our hearts – and sent us tumbling into each other’s arms.

A Legend Of Young Lovers

Old Guaraní legends tell of the monstrous serpent who lived in the Iguazú River. Every year Guaraní tribesmen would sacrifice a young virgin and throw her into the furious waters for the serpent.

Guaraní tribes from far and wide were invited to attend the ceremony, but one year, a young chieftain by the name of Tarobá laid eyes upon the beautiful virgin, Naipí, who had been chosen for the sacrificial rite.

Taroba fell in love with Naipi on the spot and tried to convince the council of elders to free her from her doom. Defeated, he decided to capture his love and escape with her by moonlight in a canoe.

Tragically, the serpent saw the lovers escape and became enraged, lashing her tail with such force that the river split apart, the earth broke open and the mighty Iguazú Falls were formed.

Wanting to remain together forever, Taropá’s spirit was transformed into the trees that guard the falls, while Naipí’s long hair became the water that eternally cascades down.

The nearby town of Puerto Iguazú offers a good variety of accommodation for every type of budget. Backpackers and young travelers will find Los Helechos hostel a fitting retreat with air conditioned rooms among bird-filled gardens and a small but convenient swimming pool.

Iguazú Falls is spectacular. Go. You will be blown away. 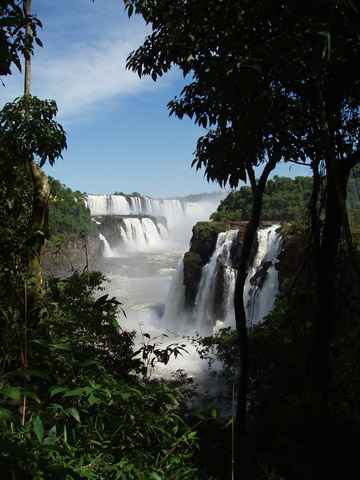 But remember – Iguazu isn’t the only attraction in Misiones. To truly open your heart to the ancient magic of the red province, you need to get off the tourist trail. Here are some insider tips to hush-hush destinations:

Jesuit missionaries arrived in South America in the 17th century during the Spanish colonization to convert the Guarani to Christianity.

The missions they built here were not meant to enslave the indigenous natives, but to protect the land and its people from slave-hunters working for more mercenary European colonists.

As one ventures near, the exquisite marriage of European religious architecture and Guarani artistry is clear, with indigenous carvings of river-snakes intertwined with elegant classical ornamentation.

San Ignacio is protected by UNESCO, but there are other Jesuit reductions nearby that are kept by local organizations, such as Santa Ana and Nuestra Señora de Loreto.

Both of these ancient ruins are half-eaten by the jungle: roots and canopies invade the old stone walls in a silent struggle to reclaim the land. 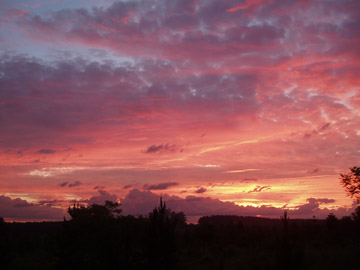 Santa Ana has been left as found without the preservation works that were undertaken at San Ignacio. Here, the vestiges of the once busy missions are scattered around the dense jungle floor, where vines and thick branches garland down from stately trees.

Nuestra Señora de Loreto, only about 30 minutes away from Santa Ana, is guarded by an army of quiet lizards who bask in the sun on the ancient mission walls.

There is also a carved pillar here that has been all but eaten up by the bark of a tree. Each year the tree engulfs the pillar a little more, but prying the thick roots away would mean destroying the 400 year old pillar, so the rock and tree remain locked together in a slow embrace.

Misiones is all about nature, and there’s no better way to appreciate it than by camping. There are many excellent camping grounds , but the Paraje Tres de Mayo in the district of Garuhapé is the best.

The nearby Indian Cave, which looks out to a natural swimming hole fed by cool waterfalls, is rumored to have been the home to groups of hunters and gatherers who left behind remains of their primitive tools made of shells and bone.

Hikes above and around the cave take you deep within the damp undergrowth where hordes of butterflies rest in red-water puddles.

The water is red because the soil in Misiones has staggering levels of iron, making the earth come alive in shades of flaming terra cotta. The red rapids of the mighty Misiones rivers churn and curl with the richness of minerals.

For Ed and I, the trip to Misiones was about connecting with the raw force of nature, with the people who gave life to this part of Argentina, and most of all, with each other.

For a moment we put our European roots aside, and remembered the original inhabitants of our country. The native red soil of Misiones stuck to our shoes and jeans and hearts.

Matador members who loved their trip to Iguazu Falls include Morris Abroad, an expert on Buenos Aires, and Helena de Natalio, who creates clothing and accessories in Buenos Aires and travels regularly between BA and San Francisco.

Tagged
Parks + Wilderness Romance Trip Planning
What did you think of this story?
Meh
Good
Awesome

This Valentine’s Day, stay in Juliet’s house in Verona, Italy

10 icebreaker questions that can lead to deeper travel relationships