Portland is a captivating city, with all the scenes that make a place stand out as a must-see destination – unique art, sustainable and historic architecture, original food and restaurants, tasty craft beer, and quirk – lots of it.

So while it’s tempting to spend your entire PNW trip downtown, you’d be remiss if you didn’t make a quick trip to one of the nearby Portland waterfalls. One of the city’s best features is its proximity to some of the most stunning displays of natural beauty in America – like the Columbia River Gorge, which is home to the highest concentration of waterfalls in the country. But there are great falls just across the border in Washington, too.

You could easily spend a week exploring what’s known as the “Waterfall Corridor,” but if you’re limited on time and can only see the top-shelf collection, here are the best waterfalls near Portland to visit within about 30 minutes of downtown (pending traffic, of course). 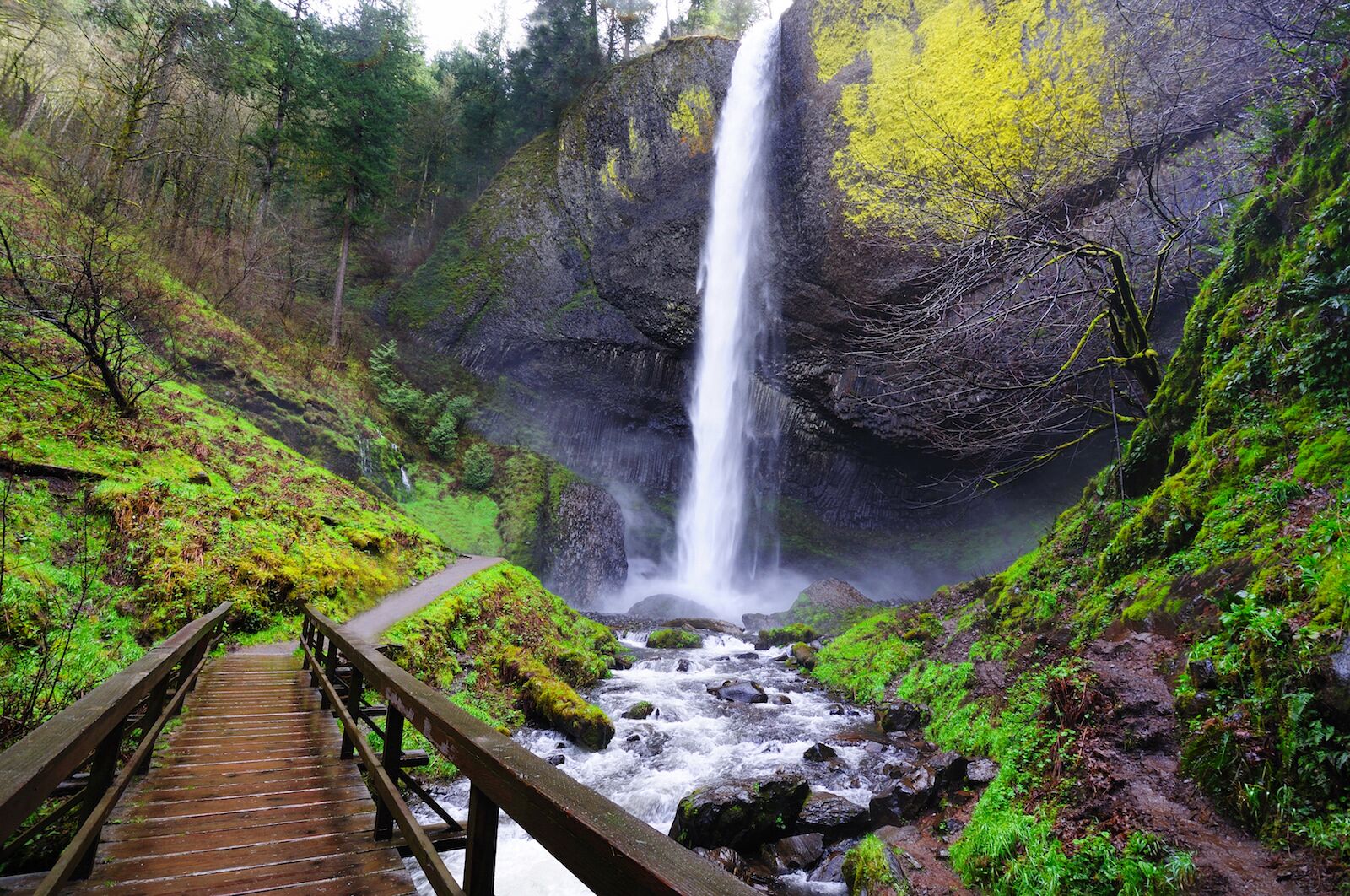 Latourell Falls is within Guy W. Talbot State Park, off Exit 28 on the Columbia River Gorge Highway. It’s an easy one-mile round trip walk to the Lower Falls and historic 1914 Latourell Creek Bridge at the base of the falls. From there, you can look up at the dramatic 224-foot, single-plunge waterfall that drops straight down from a massive basalt rock blanketed by thick yellow lichen.

If you’re game, you can take a moderate two-mile roundtrip hike to Upper Latourell Falls. And if you have time beyond that, add in a visit to Shepperd’s Dell Falls. It’s about a mile down the road and has just a short stroll to reach the viewpoint. It’s a two-tiered waterfall that tumbles a combined 92 feet over steep cliffs into Young’s Creek on its way to the Columbia River. 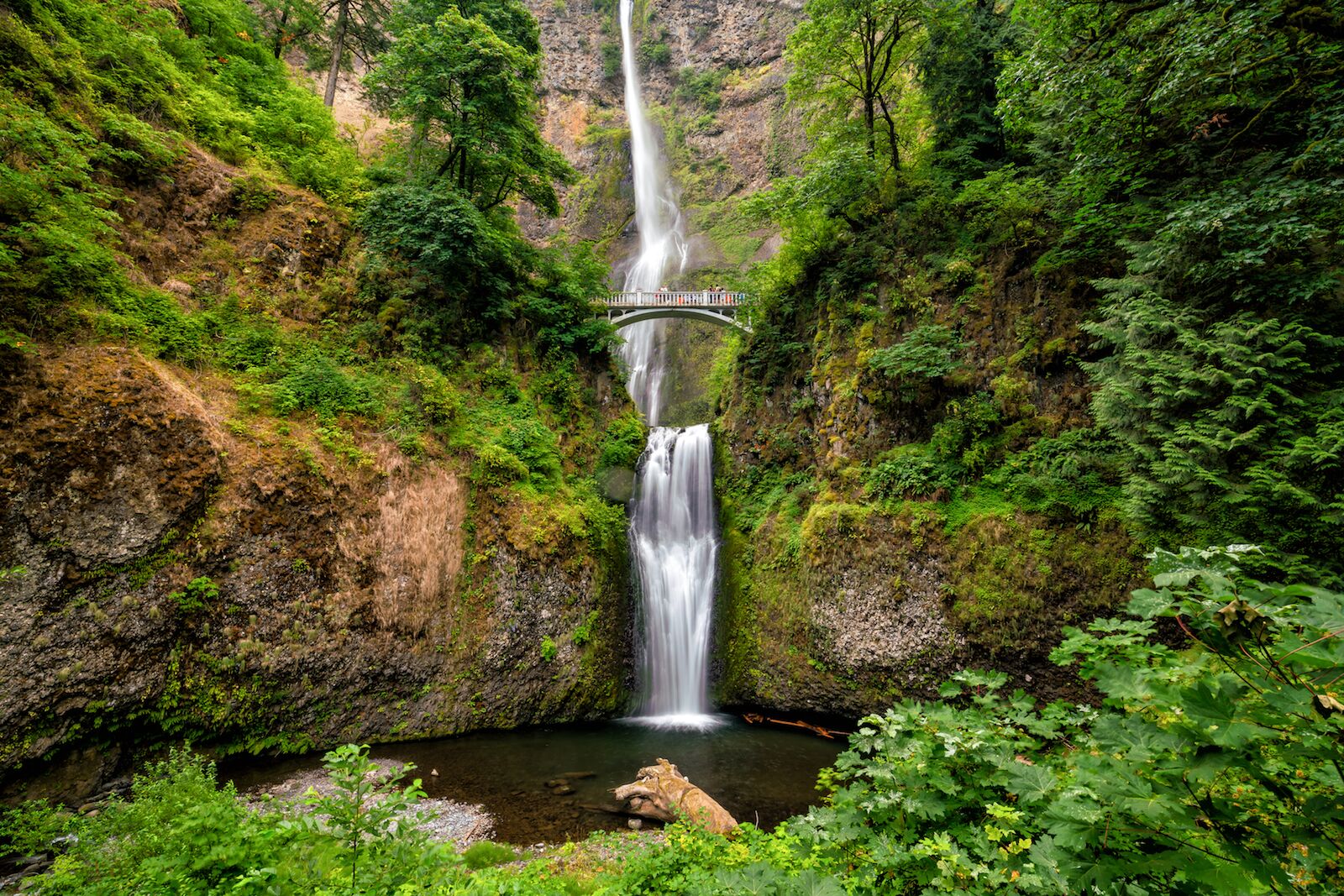 The most famous waterfall near Portland is Multnomah Falls on the Historic Columbia River Gorge Highway. It’s the tall, iconic waterfall behind the Creek Bridge; you’ve probably seen it on a screensaver or default desktop background.

With a drop of 620 feet, it’s Oregon’s tallest waterfall and is visited by more than two million people yearly. It’s become so popular that timed use permits are required between late May and early September. Fortunately, the entry fee is only $2 per adult for a one-hour time slot, and you can buy the permits on Recreation.gov, usually for the same day, or one day in advance at the longest.

From the viewpoint, travelers intent on seeing the best Portland waterfalls on foot can take the Wahkeena Falls Loop trail. It’s a moderately challenging, five-mile loop past six waterfalls, including Fairy Falls – a particularly enchanting 20-foot waterfall fanning out over several rocky clusters. Fairy Falls is worth a visit even if you skip the others entirely. 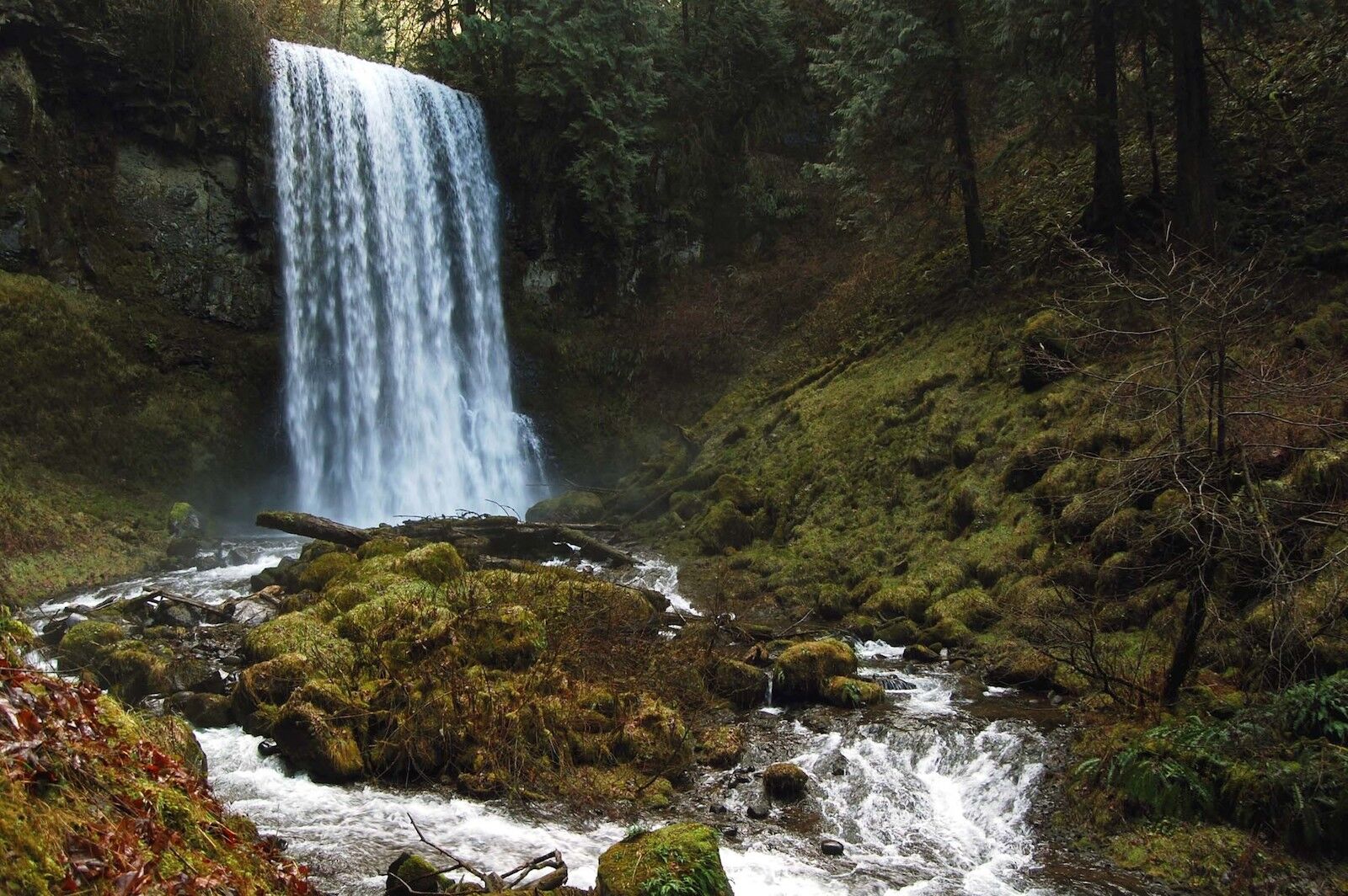 This two-tiered stunner is 120 feet tall and just a 15-minute walk from the Bridal Veil Falls parking lot, offering remarkable views of the Columbia River along the way. Though not the most original name, considering there are also waterfalls in Alaska, California, Colorado, New York, South Dakota, and Utah with the same moniker, it’s nonetheless spectacular and deserving of its local celebrity status among Portland waterfalls.

You’ll hear it before you reach the viewpoint, from where you’ll have views of a roaring double fall pouring over moss and ferns. Indeed, it does look like a bride’s wedding veil. For a thoughtful touch for friends back home, buy some postcards at the gift shop and mail them from the impossibly quaint Bridal Veil post office down the street from the parking lot. 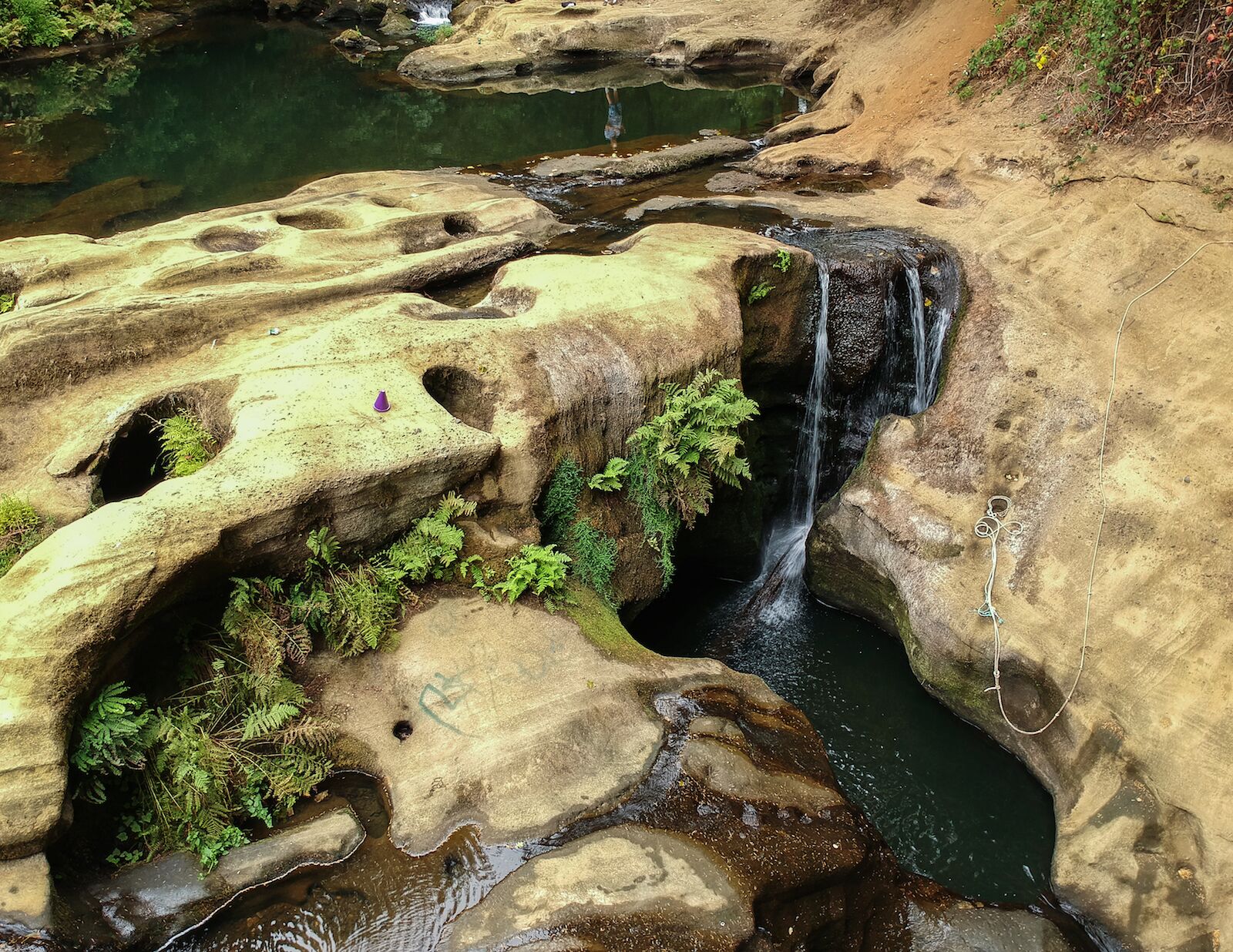 If you’d prefer to avoid dealing with reservations and crowds around the Columbia River Gorge area, head instead just across the Washington State border to Lacamas Regional Park, less than half an hour northeast of Portland. The park’s multiple falls aren’t as large as those farther east, but they’re beautiful, easy to access, and some of the best waterfalls near Portland to see while trail running or mountain biking (both of which are allowed in the park).

If you take the park’s Woodburn Falls and Round Lake via Lake to Lake Trail, you’ll pass two waterfalls over the course of about three miles: Woodburn Falls and Pothole Falls. The latter is a popular place to cool off mid-hike if you visit in the peak of summer. The trail can sometimes get muddy and slippery, so wear shoes with good grip and use your hands and feet if you decide to scramble up any rockfalls or steeper traverses. 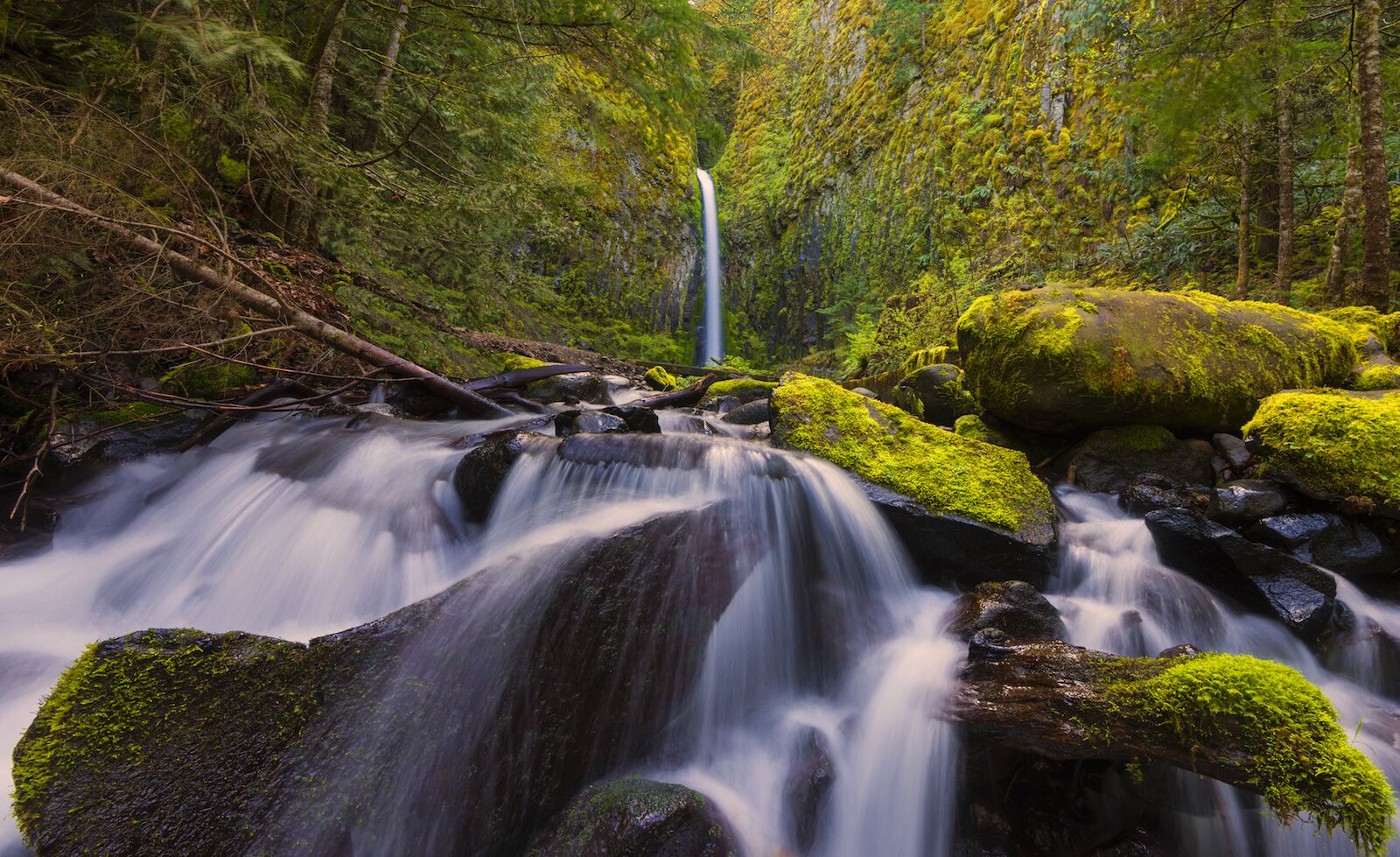 Surrounded by an arena of moss-covered basalt rock colonnades, Dry Creek Falls descends 74 feet into a rocky apron of boulders. Accessed via the Bridge of the Gods Trailhead or the Pacific Crest Trail Cascade Locks Trailhead, it takes most people about two hours to hike the easy 4.4-mile, out-and-back trail (which also offers a chance to hike along the world-famous Pacific Crest Trail).

This area was heavily damaged by the Eagle Creek Fire in 2017 and was finally reopened in July 2020, so you’ll notice blackened tree trunks and other devastation from the burn. There’s also an old water diversion structure from the 1930s at the base, which used to provide water for the nearby town of Cascade Locks. 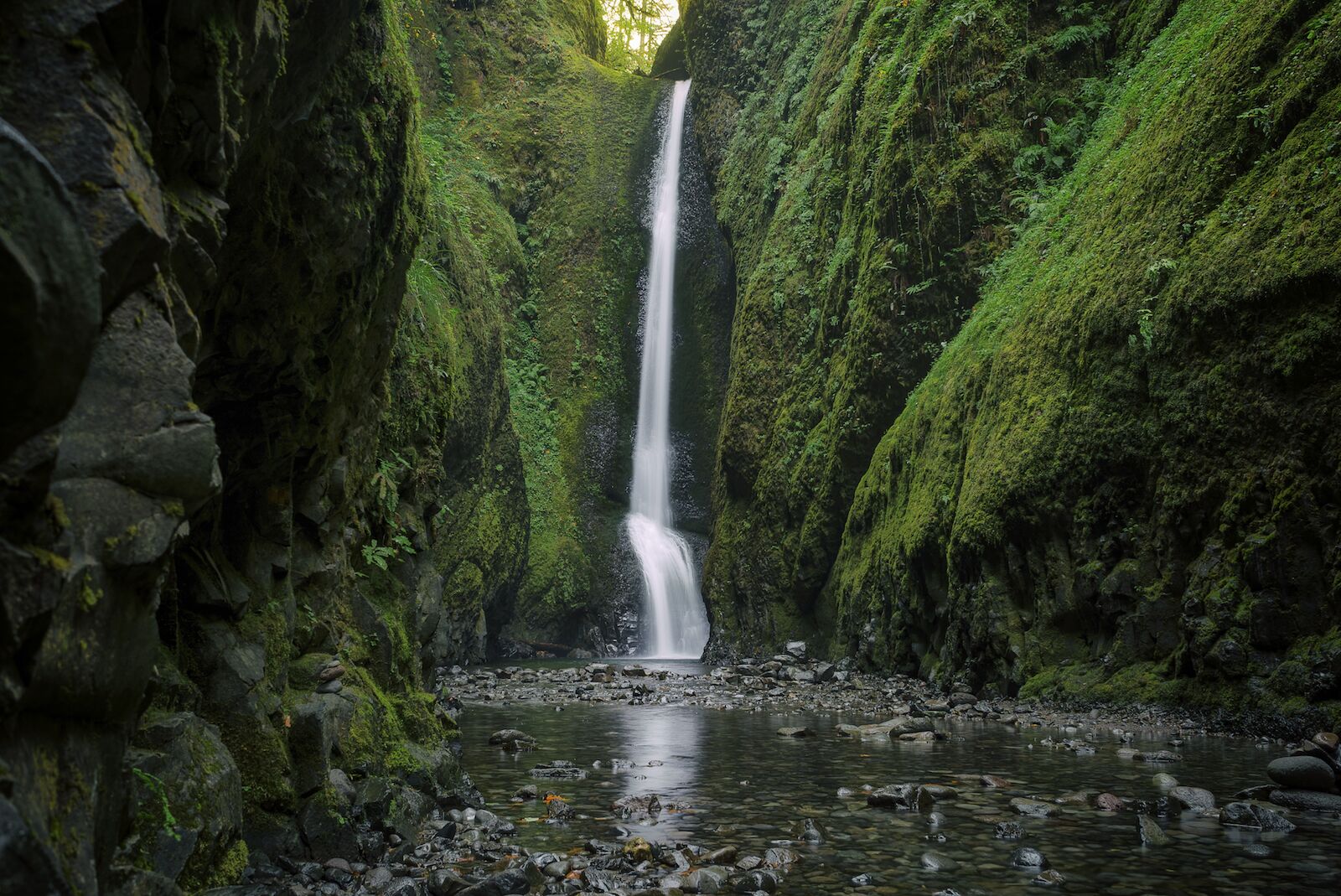 There are three waterfalls in the Oneonta circuit: Upper, Middle, and Lower Oneonta Falls. There are a few choose-your-own-adventure options to see all three of the Oneonta Falls and trail offshoots to connect the loop to Triple Falls and Horsetail Falls. Triple Falls is one of the most photogenic waterfalls near Portland thanks to its three distinct channels, or fingers, which drop more than 60 feet down sheer walls into Oneonta Creek.

Many visitors tackle the steep ascent to Triple Falls early in the hike before descending to the Horsetail Falls junction to see Middle and Lower Oneonta Falls in a lush gorge near the mouth of Oneonta Creek. From there, hikers can either return to the Oneonta Trailhead or continue on the path behind Ponytail Falls, an 88-foot-tall fall flowing from a rocky outcrop.

The trail ends at Horsetail Falls and has unobstructed views of the 176-foot-tall falls flowing into an emerald plunge pool. The trails are moderately challenging and can get slippery, so shoes with good traction are key. Note that parts of Oneonta Gorge are still closed from a devastating 2017 fire, but you can use this site to check the status of everything in the area. 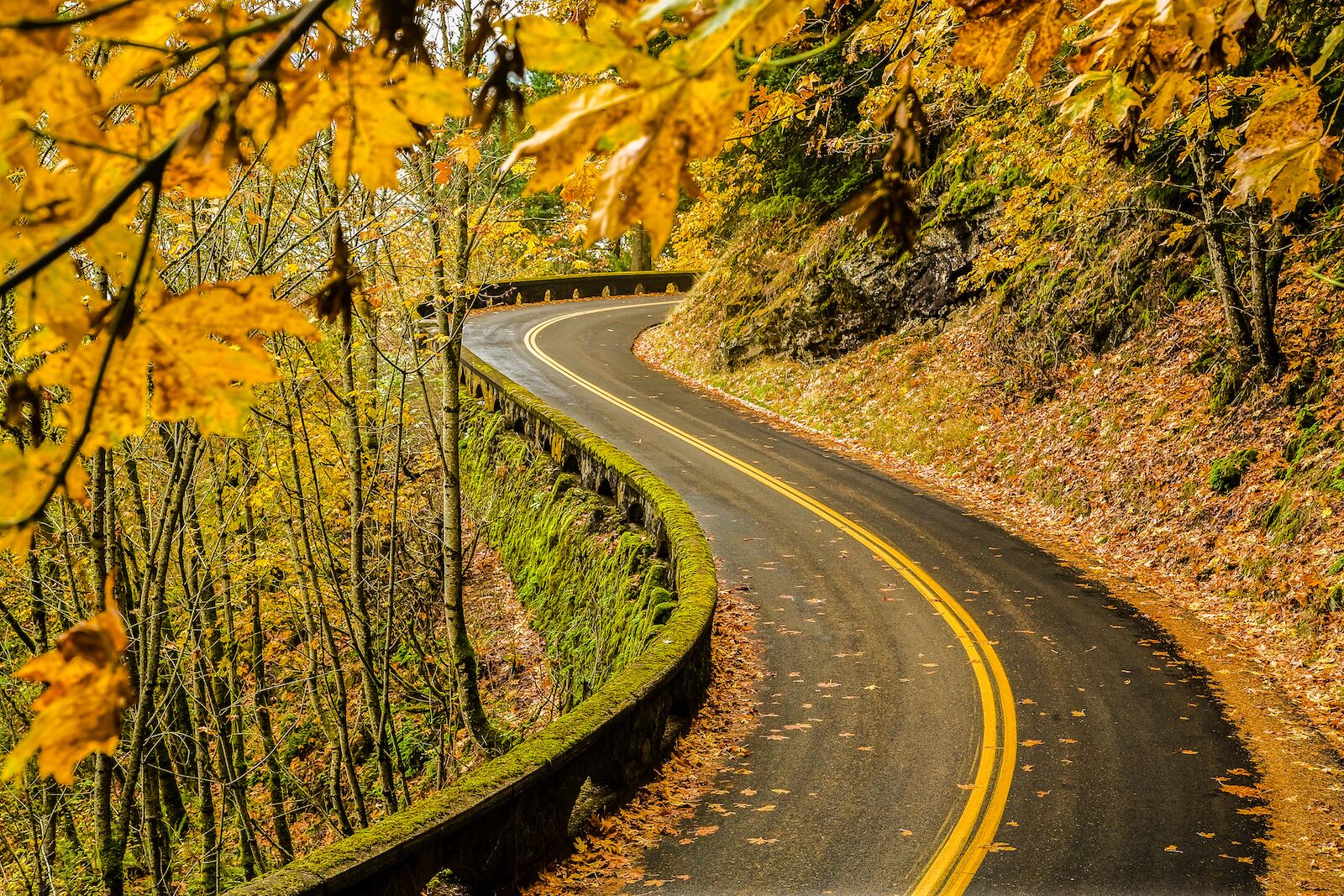 If you don’t have a car or don’t want to drive to see the best Portland waterfalls, book a spot on the hop-on, hop-off Sasquatch Shuttle for $15 or Waterfall Trolley for $21; the latter includes a reservation for Multnomah Falls.

Another great way to see these falls is to book an e-bike tour to five, seven, or nine waterfalls, depending on which tour you choose and how long you want to spend on a bike. 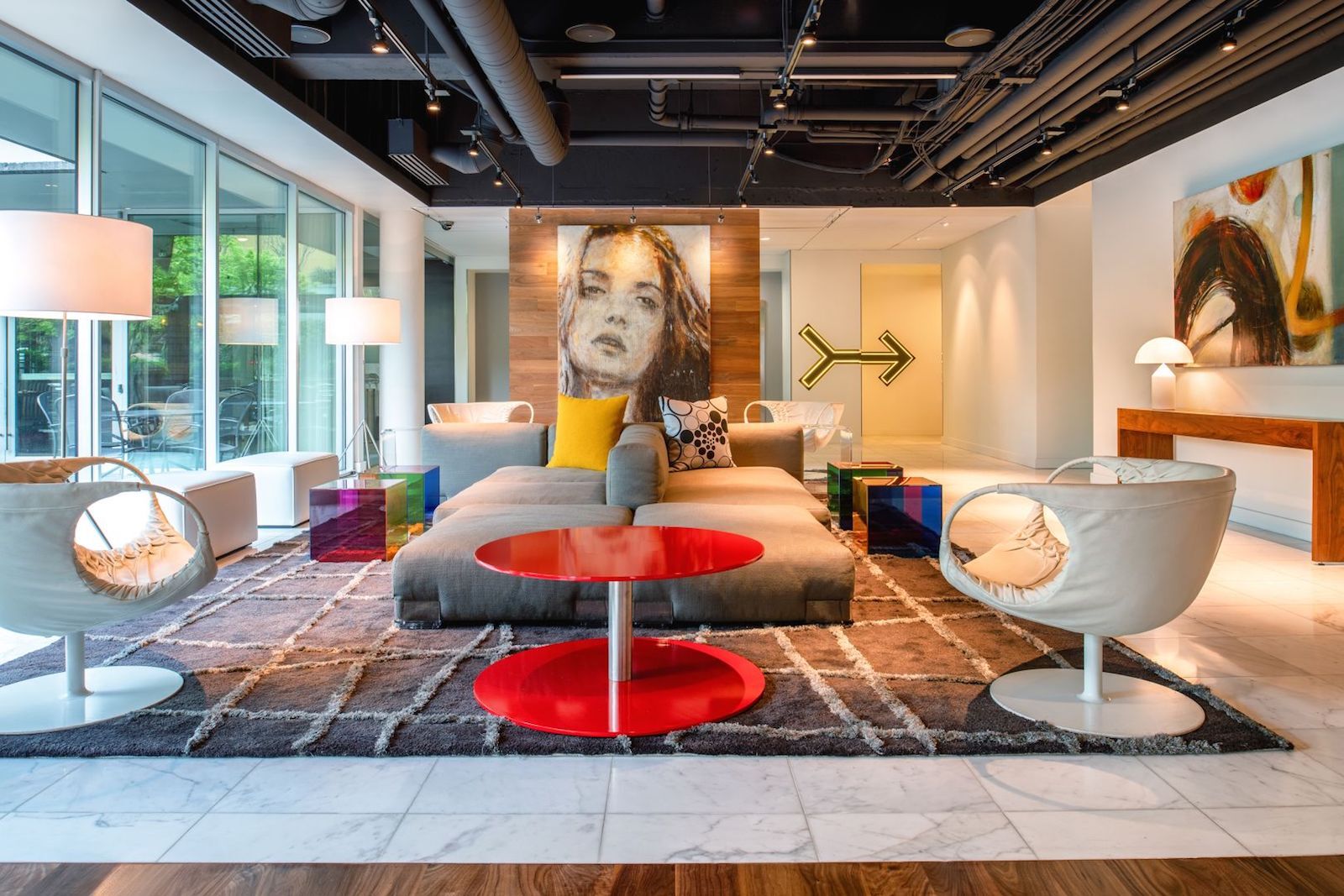 Hotel Zags is a newly redesigned, chicly decorated hotel in downtown Portland. In addition to modern rooms, it has unique amenities like a game room and a gear shed with GoPro cameras, backpacks, bikes, and skateboards available for guest use.

For something closer to the falls but still within a quick drive of the city, consider one of the basic and reliable hotels in Troutland, considered an east suburb of Portland. The Best Western Plus Cascade Inn & Suites, Holiday Inn Express Portland East, and Hampton Inn Portland East are all easy places to spend the night if you’re keen on spending your budget on exploring Portland’s food and drink scene instead.

Budget Travel8 Ways To Keep Your Costs Down on a Trip To Portland
Tagged
Hiking Outdoor Portland, OR, United States
What did you think of this story?
Meh
Good
Awesome