I’m Louis, A.K.A. Explorason. I have been to 64 countries so far, and I want to go to many more. We started planning our trip when I was five, we left when I was seven and now I’m ten.

This is why we decided to travel. My Mum was trying to pay the bills, so she was working all day, and right up until midnight. She would put me to bed and go back to her home office. In the morning, she would take me to childcare and they would feed me breakfast. It was horrible. I was so lonely at home at night, even though I had heaps of toys. My Mum never had much time to spend with me because she was working, even when she was at home. One night I asked her to help me build a train track and she explained she had to work so we could afford to pay our bills and our house. I told her “I don’t want a house or another toy. I want my Mum”.

That night we talked and made a decision to travel and change our lives. 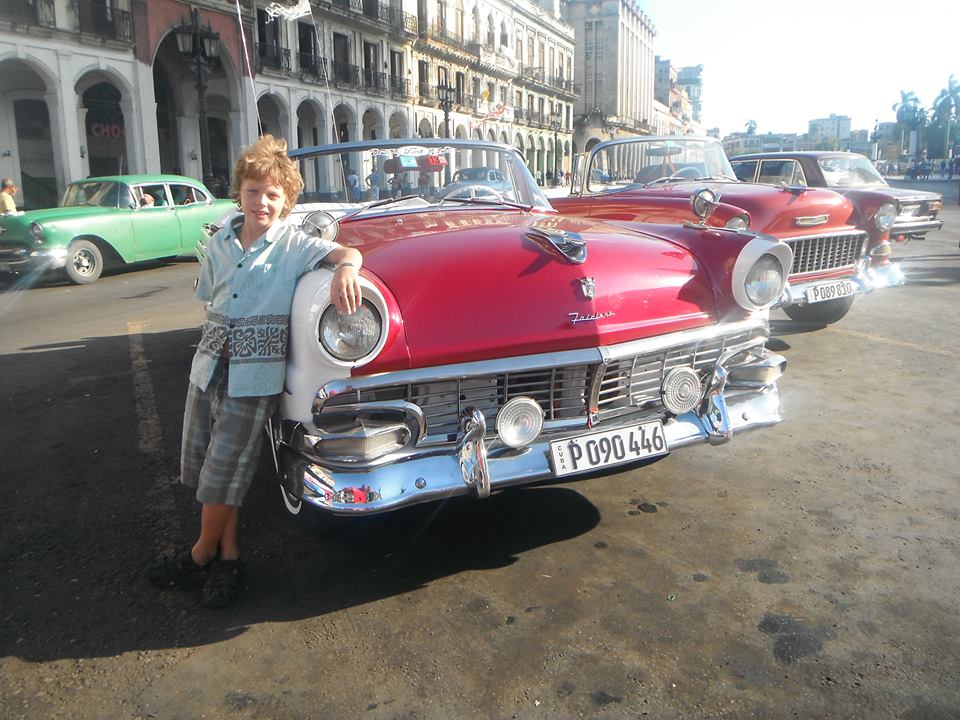 So we made a lot of lists and every day we both had to do something on the list towards achieving our goal. At first, it was our big secret. I helped do jobs around the house, and Mum fixed the house up to sell. We sold loads of stuff we didn’t need, and I packed away my toys – which was when I had a great idea! I wanted to give my toys to poor kids that we would meet on our travels.

Before we left Australia we cut out different places from magazines and newspapers that we wanted to see in the world. Mum and I picked different places of course, but my main one was the Eiffel Tower – I remember that, and we did make it there!

The first country we visited was Fiji. I went to the local school there for a little bit, and I learned to fish and snorkel. I made friends with the local kids, and we were able to give out the toys to poor people in the villages who had hardly anything – not even electricity. We like to help people when we travel, it’s important to care about others. 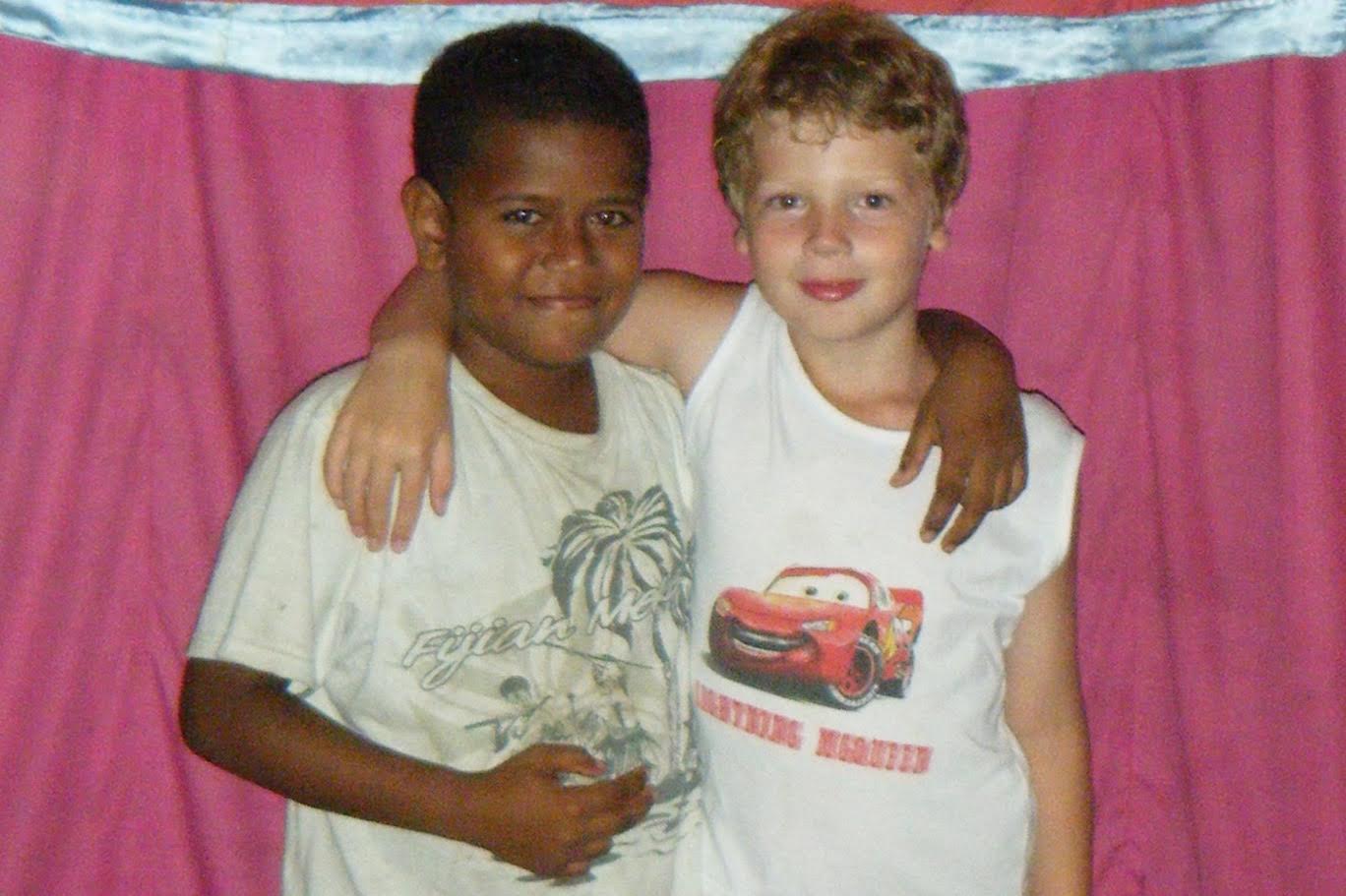 We’ve stayed in some really cool places – a hotel made of ice, castles, a palace, a Bedouin tent, a luxury safari tent, a treehouse overlooking a volcano, a grass hut, and many more.

Lots of people ask how I get educated, and the answer is: the world is my classroom. What I mean is I learn lots of stuff from locals and tours. Often the locals teach me things. Mum gives them a few dollars and that helps them a lot if there is no work. Sometimes they take me out in a wooden canoe and teach me marine biology; other times we go to a mangrove or a forest, or we use local guides who teach me about the history of places. A few times I’ve been to local schools as well, and I make a lot of new friends. We laugh a lot, and I enjoy how much they accept me, and how there is no bullying or swearing. So they teach me in a way as well. I learn about their food and culture. I visit their homes. 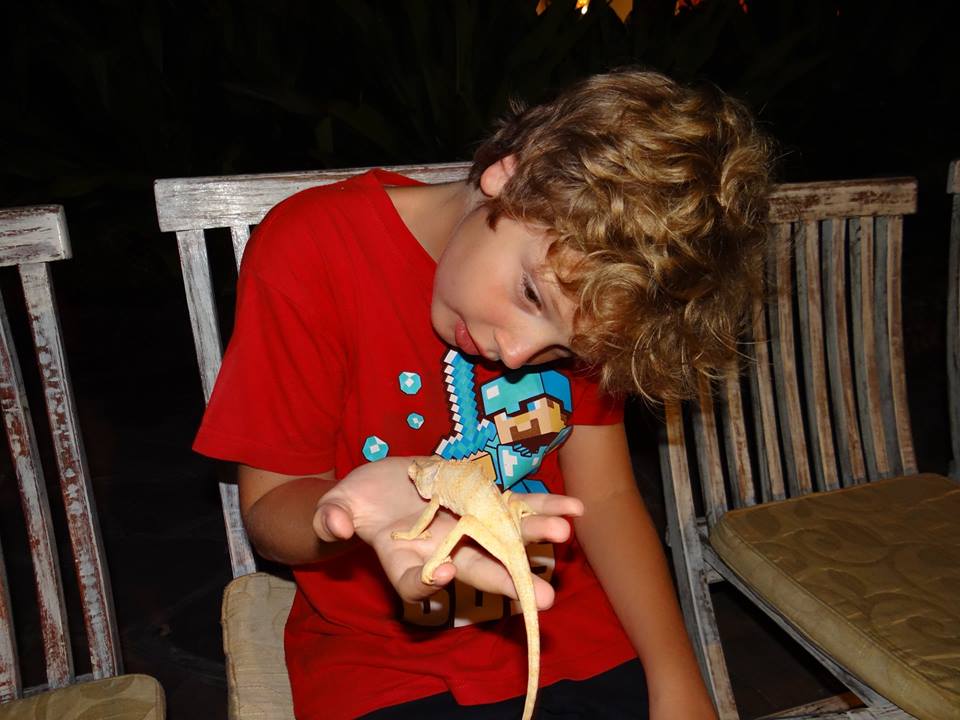 When we stop and housesit for a few weeks, I have books that I enjoy. I love to read, and my exercise books have activities for me to do. I like to complete a whole subject book at a time, and sometimes I do chapter after chapter. They don’t do that in schools. Sometimes normal books get boring and I don’t like that. I’d rather be out exploring, and learning that way.

Mum likes what she calls ‘the road less travelled’, so I also get to see and experience how other people really live, and I learn loads about how much things cost in other countries. I see very rich people and very poor people. I make friends with kids where we can’t even speak the same language, but we can laugh and have fun. For example, I’ve even been educated in Egypt by a wise guide about ISIS, and I don’t judge people because of their religion, race or upbringing. 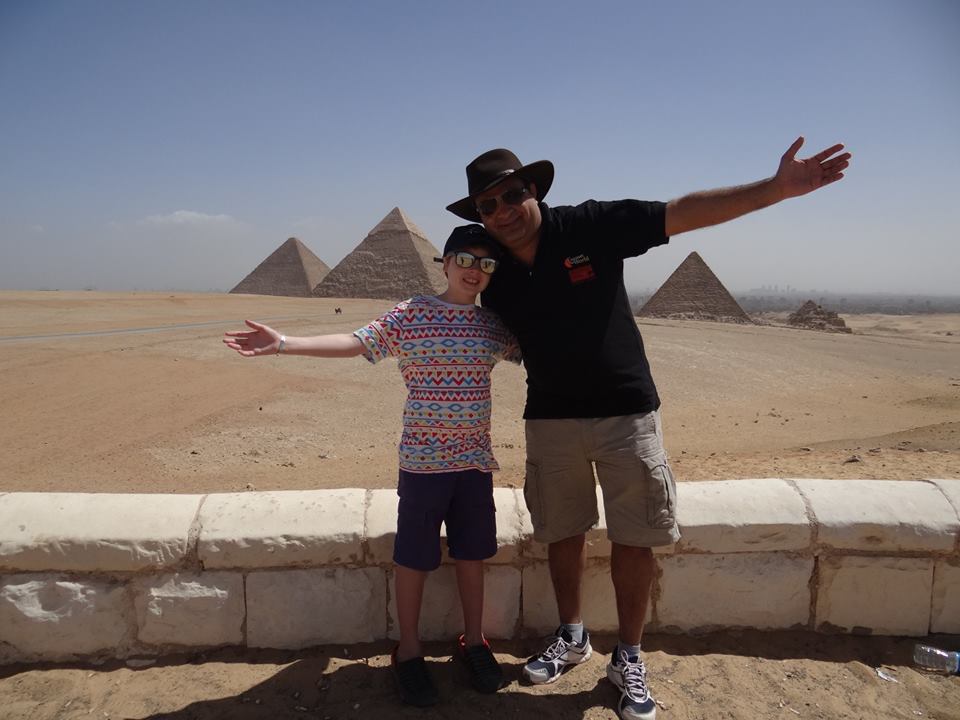 Explorason with an Egyptian guide. ©Copyright – Exploramum and Explorason

Sometimes travel is tough. You still have to do stuff you don’t want to do. When places are poor and dirty, it is harder. Sometimes people think a life of travel is 24/7 incredible, but it’s not all a bed of roses, especially as I love using the Internet, and trust me, there are some places where you can’t even get Internet – like Cuba, or remote Uganda. But often in some of these places I look at the kids, and they don’t even get water unless they carry it from the well. They don’t have a bed or shoes, and they don’t even have electricity. They have almost nothing, so I stop and remember to be thankful.

I have been to some outstanding places, like the Amazon jungle in Ecuador, where I swam with pink dolphins and fished for piranha. I’ve also ridden a camel through two deserts in Morocco, and one was a terrible sandstorm. Then there were the Egyptian Pyramids of Giza. We actually went inside one the pyramids and we were all alone. I have learnt a lot of things on our journey that not even a quarter of my school friends would know. I have done some crazy things, like toasting marshmallows on the steaming hot rocks of a volcano in Guatemala. I’ve been parasailing behind a jet boat in the ocean and riding a jet ski through sea caves in Langkawi.

I like travelling because now I get to spend time with my Mum. It is fun and I’ve seen and experienced things I could never have imagined.

At the end of the day, I am just an average kid. I just don’t have an average life.

Tagged
Family Travel Narrative Insider Guides
What did you think of this story?
Meh
Good
Awesome