In early September, I had the chance to hook up with northern Nicaragua ecotourism company Green Pathways to explore remote destinations in the northern section of Central America’s biggest country.

Many people come to this part of the country for surfing, but I quickly found out how many other adventures are possible in the area. Despite being the second-poorest country in the Americas, Nicaragua is touted as one of the safest, and I felt welcomed by everyone I met. 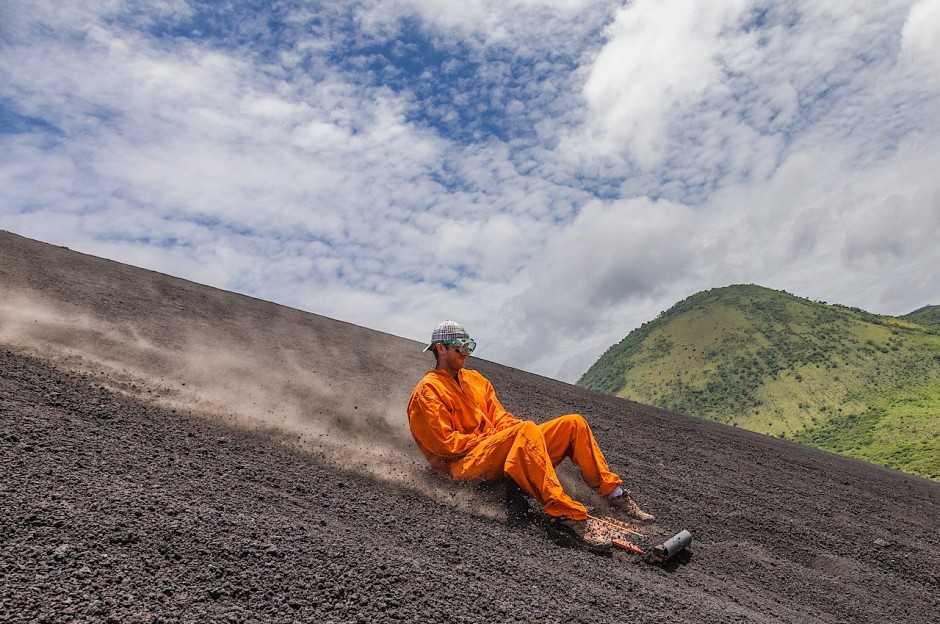 Be prepared for the ride of your life down Cerro Negro.

Volcano boarding is probably the newest extreme sport in the Americas, with people flocking from around the world to climb the 721-meter summit of Cerro Negro to ride a custom-made volcano board down. 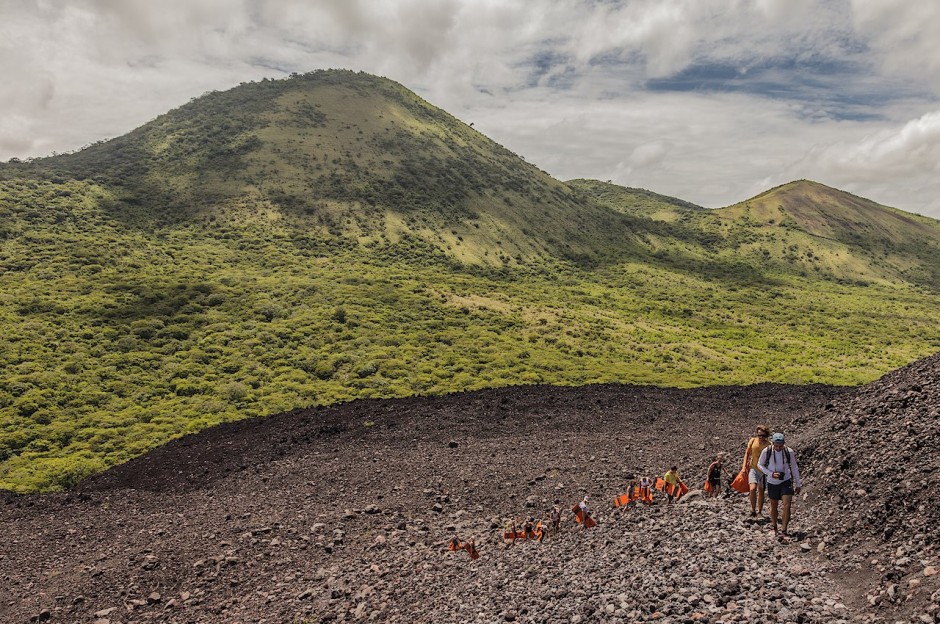 Volcano boarding starts with a scenic hike up Cerro Negro.

Besides surfing, volcano boarding is the most popular activity in northern Nicaragua. Hopefully you travel to this part of the country for remote and undiscovered adventures, but volcano boarding is well worth a morning. It takes about 45 minutes to walk up and enjoy the views from Cerro Negro and that makes the adrenaline-filled ride down even more worth it. 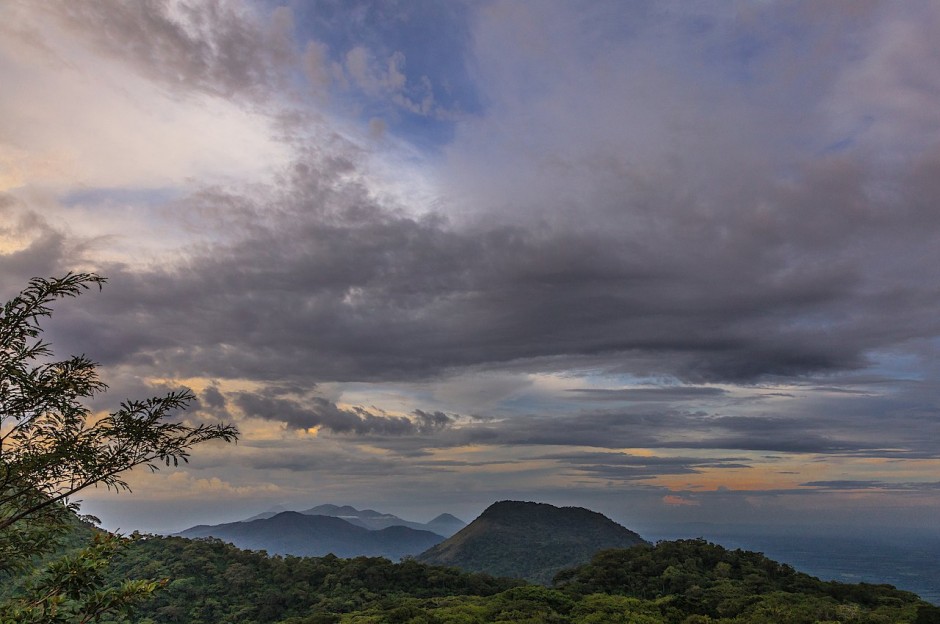 Volcanoes dominate the skyline in Nicaragua.

With 19 active volcanoes and the largest body of fresh water in Central America it is easy to see why Nicaragua is called the land of lakes and volcanoes. This volcano chain makes up part of the ring of fire that stretches in a semicircle from New Zealand to Japan and Alaska and down the Pacific coast to the southern tip of Chile. 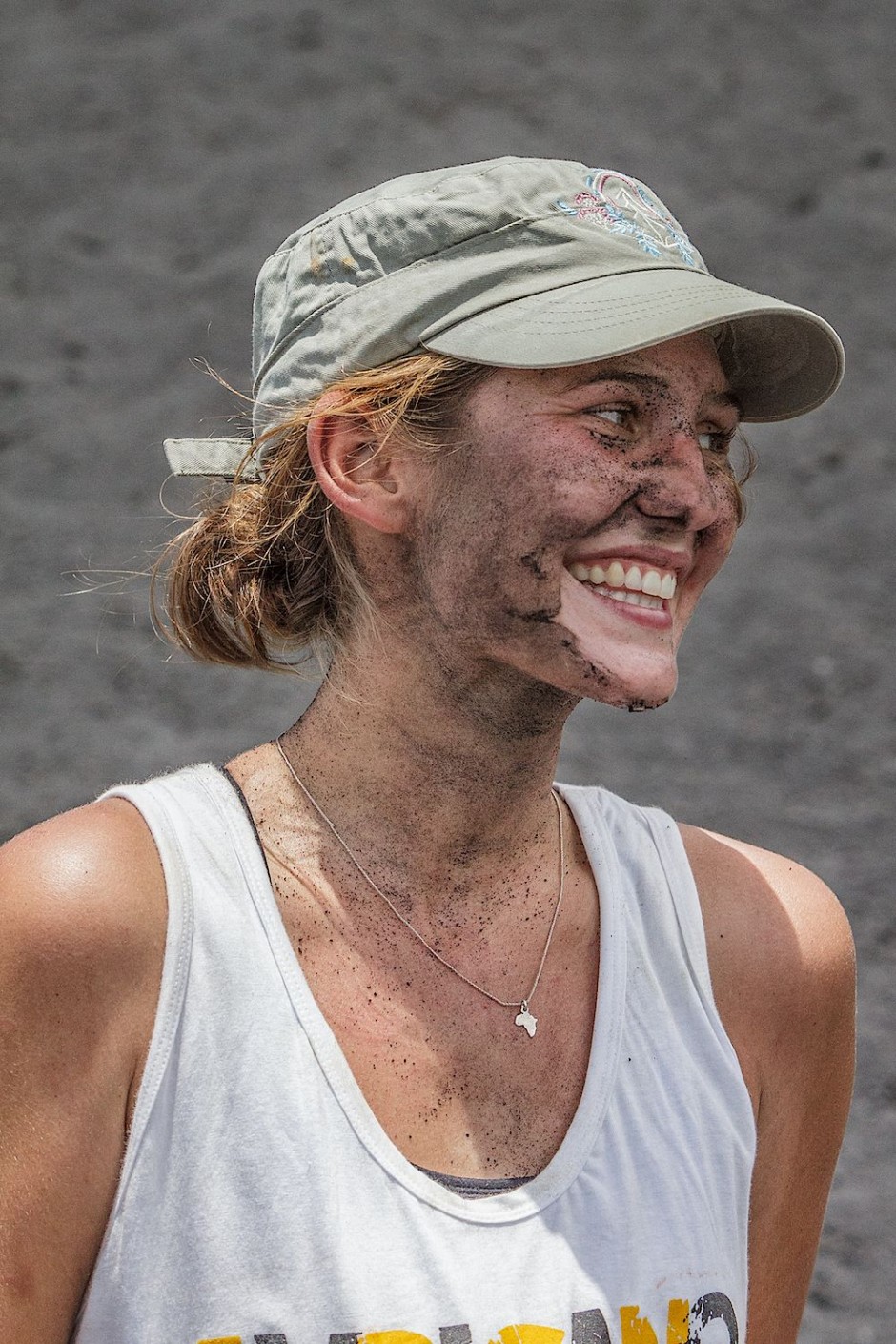 The shower afterward is also quite rewarding.

We were given large orange, inmate-like suits and a pair of goggles to protect us from the fine volcanic dust that makes up the cinder cone volcano, but we all came out of it covered with a healthy coating of black dirt. It was worn like a washable battle scar to prove that you’ve accomplished what CNN has ranked as the number two adventure on any thrill seeker’s bucket list. It does take several showers to get it out of your hair. 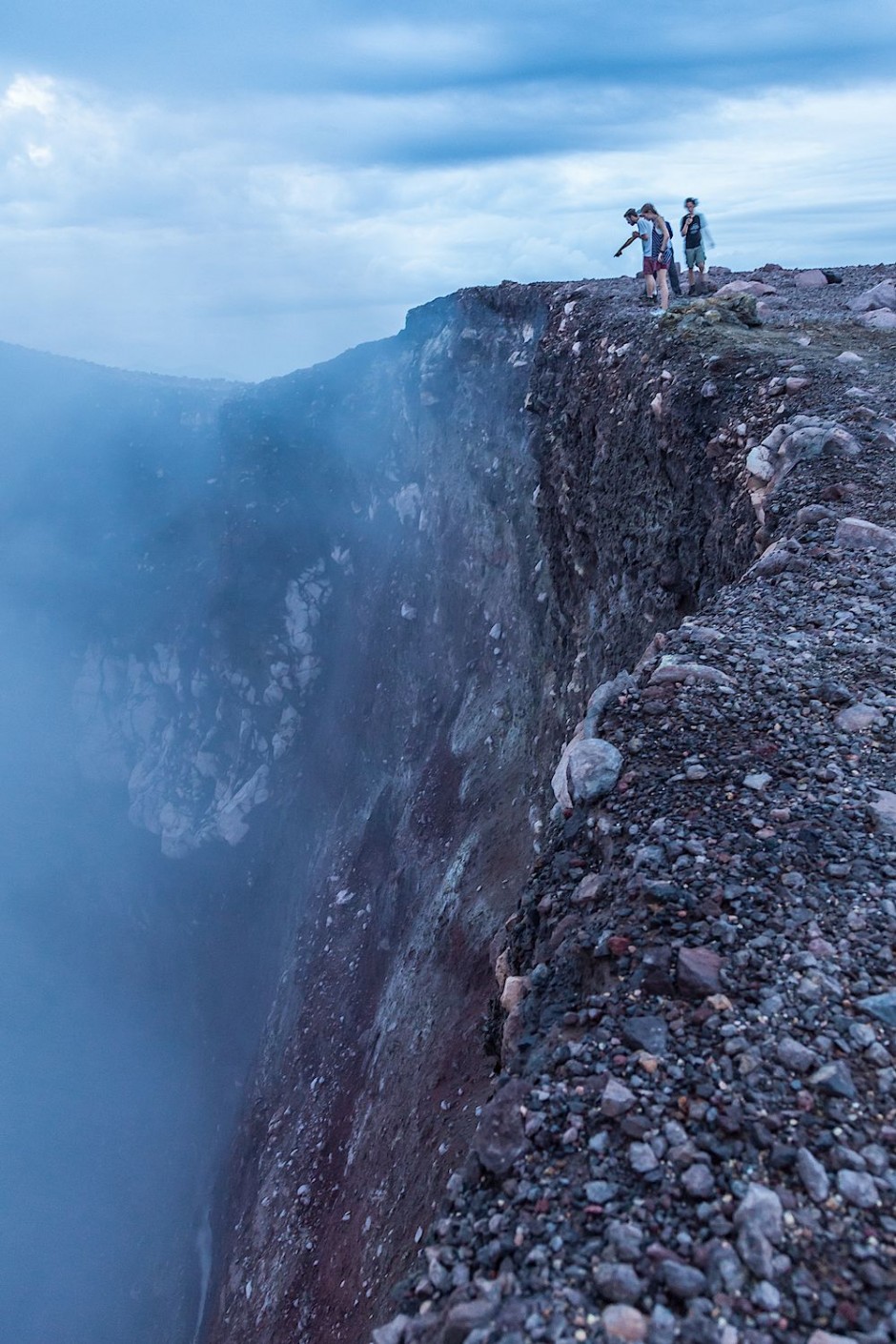 You can see glowing lava inside the Telica volcano.

Telica is one of the more active volcanoes in Nicaragua. It is also one of the easier ones to access for lava viewing. After a short hike through the forest and across one of Telica’s extinct craters, which is now a lake and meadow, we climbed to the rim of the volcano in anticipation of seeing the glowing lava below. 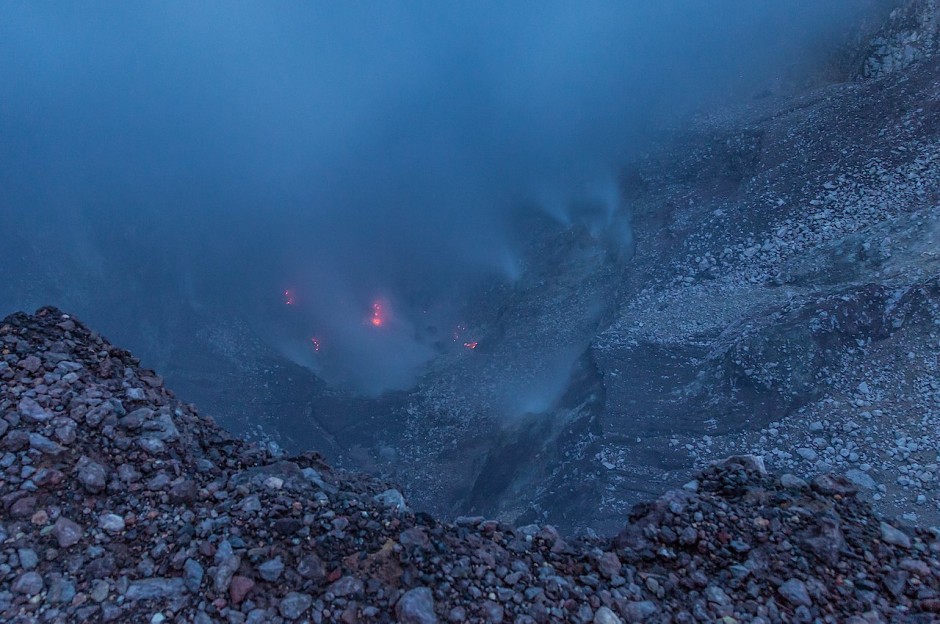 As the gases clear and the evening light darkens, lava comes into view.

The visible lava inside the crater is always changing, so on this trip we had to wait for the volcanic gases to thin enough to get views of the lava a few hundred meters below. With the heat and constant hissing and popping sounds it felt as if we were standing on a living creature, essentially we were—a reminder that the earth is living. 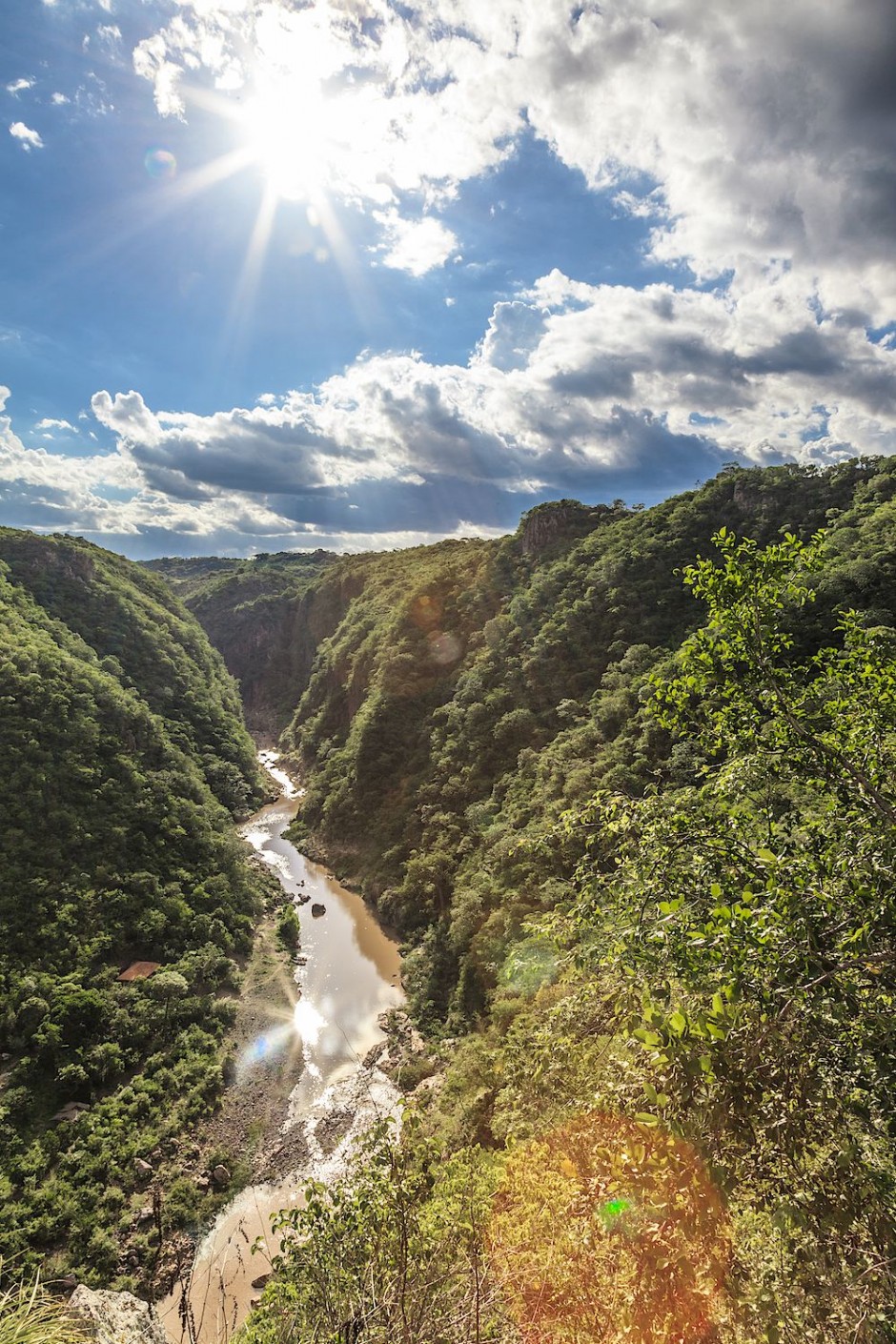 Somoto Canyon cuts through the drier landscape on the northern border of Nicaragua.

Somoto Canyon, close to the border with Honduras, wasn’t “discovered” (by non-locals) until 2003 when two Czech geologists came to study the unique rock formations in the canyon. They told the local Nicaraguans that this amazing canyon is something that people would want to travel to and swim and hike through. Today most of the visitors come from within Nicaragua. 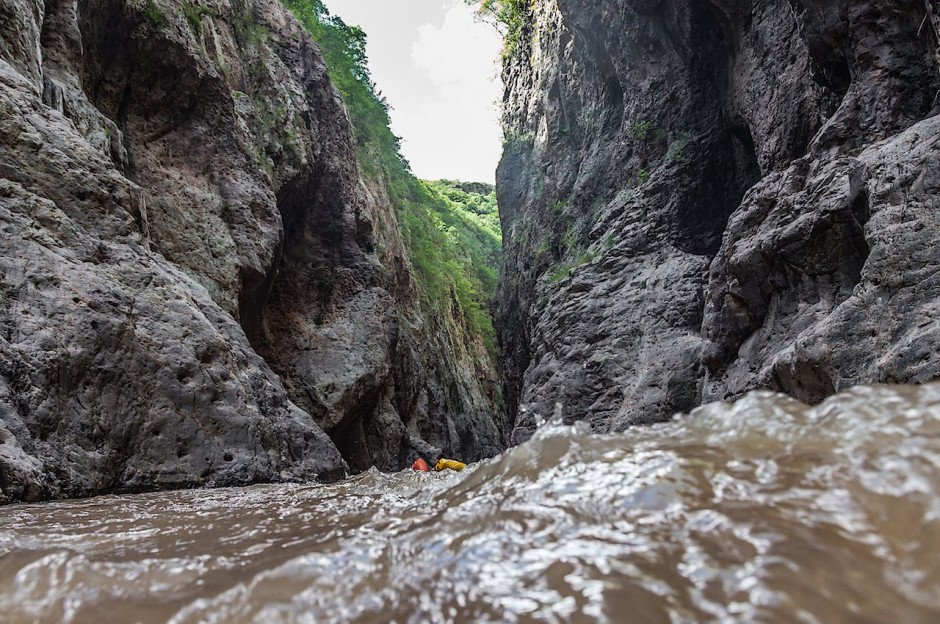 Floating through Somoto Canyon is a refreshing break from the heat of Nicaragua.

More than a decade later tourism is still in its infancy so you will probably be the only traveler in the canyon, which allows for a peaceful adventure. With a lifejacket and dry bag in hand you’ll hike through the drier parts of the canyon and float down the Rio Coco—the longest in Central America—with 200+ meter walls rising above you. 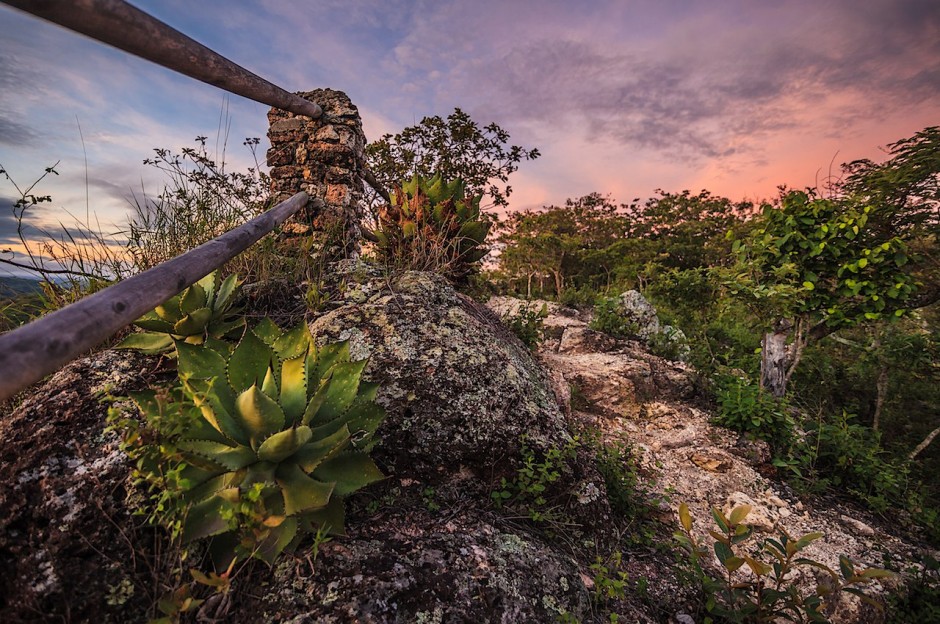 Agave grow on the rim of Somoto Canyon.

My local guide, Osman, spent the first 20 years of his life living in the canyon and swam and fished in it on a daily basis. This is how he knows were all the underwater rocks are so he’ll tell you exactly when you need to lie flat as you float through a shallow rapid to avoid a rocky collision. He began giving tours on a “pay what you want” basis and after a pair of tourists gave him a tomato and a banana in return for an all-day tour he decided he needed to get serious about his guiding business and is now a certified guide. 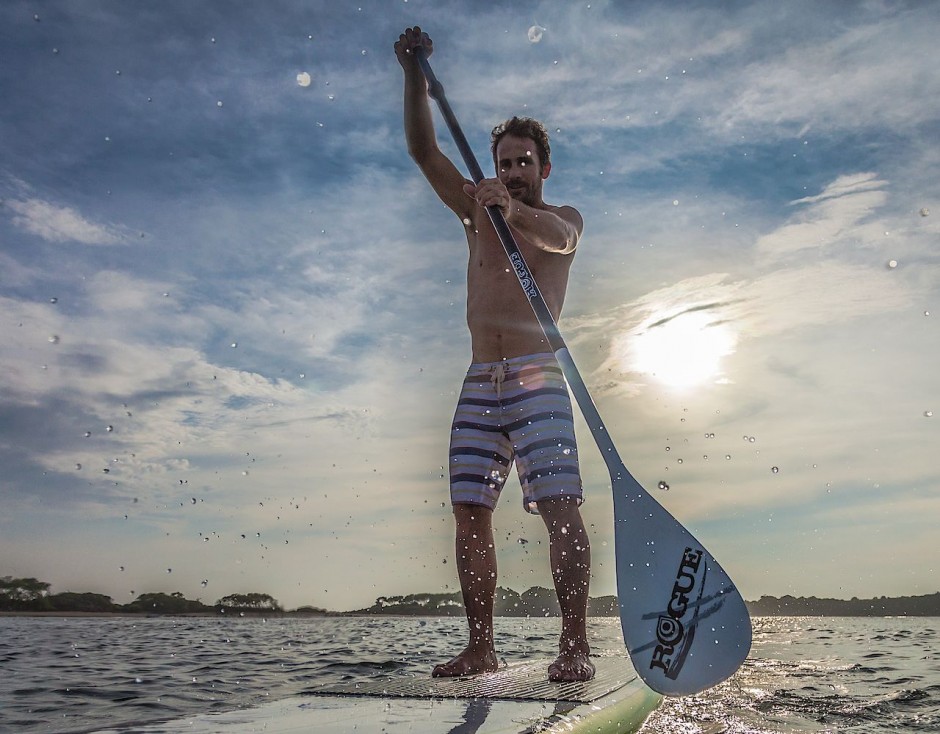 Many people come to northern Nicaragua for the great surf, but the water-based activities are endless along the Pacific coast. Stand up paddle boarding has become popular around the world, but only recently arrived in Nicaragua. With warm water, beautiful coastline, and water conditions that vary from totally flat to world-class surf breaks, this is a great place for your first paddle-boarding experience or to test your expert skills.

While surfing is very condition-dependent—paddle boarding can be done in any type of water so the possibility of exploring new waters increases. We left the port of Corinto and headed out a sandy beach on the small island of Castañones for lunch and more paddle boarding in the calm water of the bay. Just next door is the island of Cardon where the famous poet Rubén Darío spent some of his life. 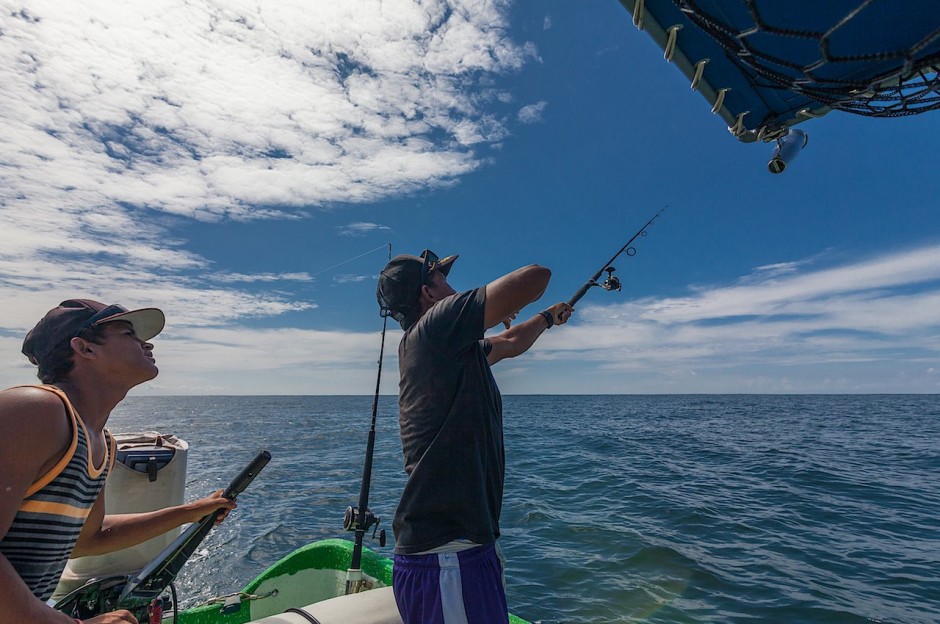 You can go on a fishing tour out of Aserradores...

Many of the local people in Aserradores fish for a living in their small boats and sell the fish to local markets and restaurants late in the morning. If you look on a map you might be hard pressed to find the community of Aserradores, but that makes it worth the visit. Fishing just off the coast provides opportunity to catch mackerel, snook, and roosterfish. Jack fish and mahi mahi are found further out into the ocean. 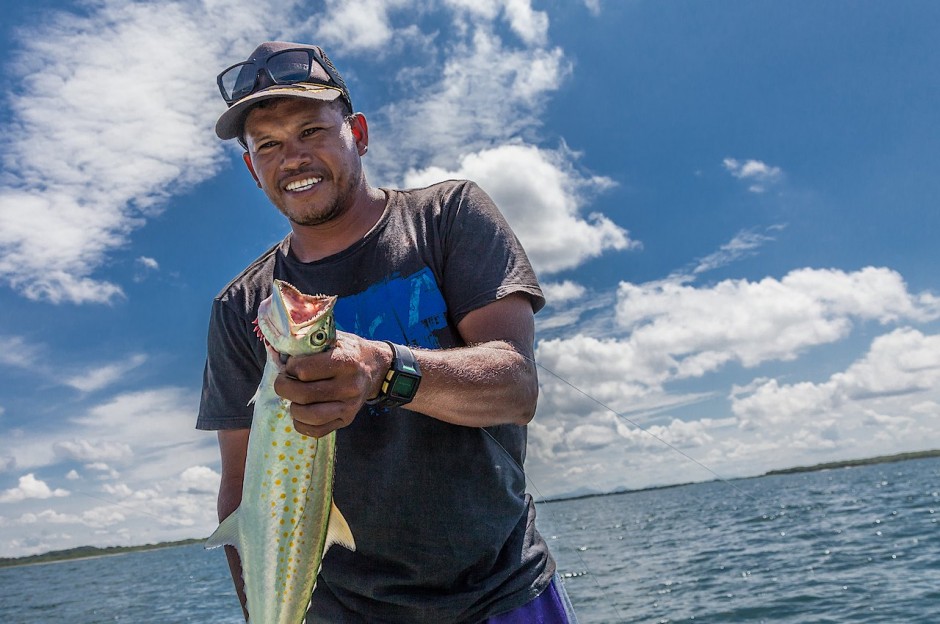 ...and eat fresh mackerel for lunch.

After a slow morning on the water Noel, the boat captain, suddenly perked up and started reeling in one of the rods that had a lure in the water. I hadn’t noticed the subtle movement of the fishing rod. He reeled in a small mackerel—a beautiful fish. And two hours later the fish was sitting next to rice, beans, and fried plantains on our plates. It might have been the best fish I’ve ever eaten. 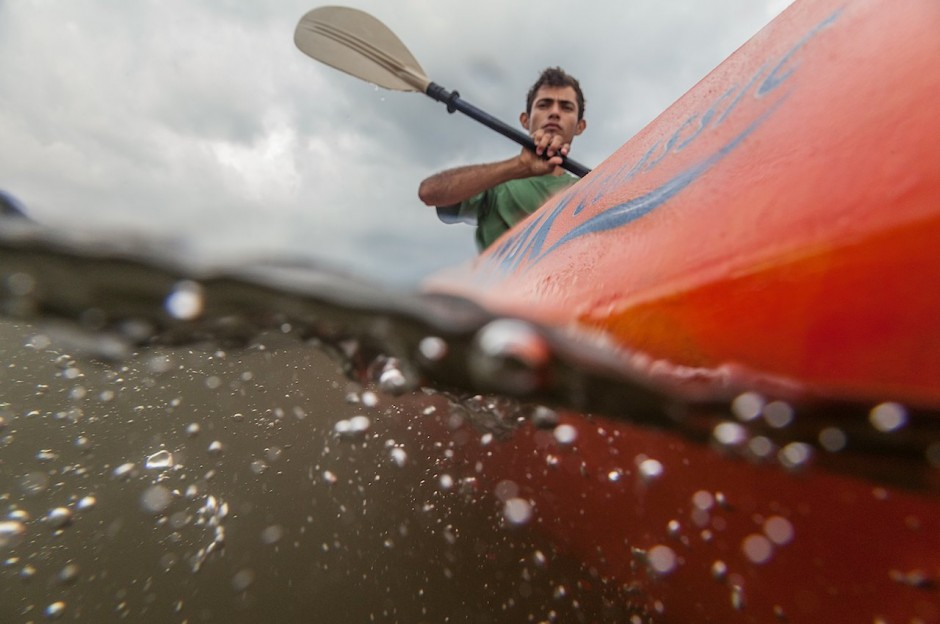 There's also good kayaking near the village of Aserradores.

Kayaking is another one of the newer sports to Nicaragua. There are a few areas along the coast to paddle through the calm waters of the mangrove forests that are inhabited by a variety of birds, fish, and colorful crabs that hide along tree branches. 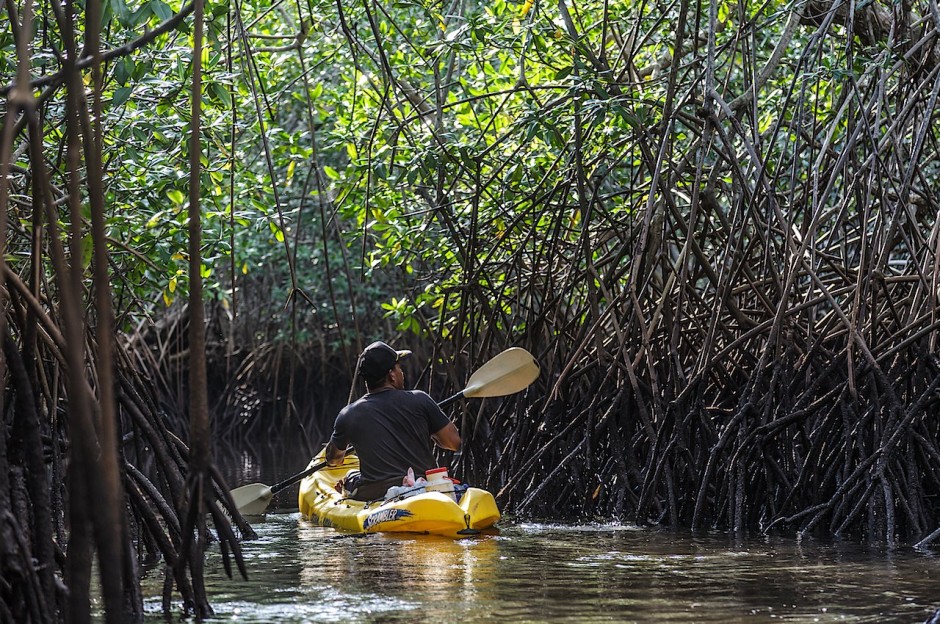 New tunnels open up in the mangrove forest as the tide recedes.

While paddling into the protected estuaries, we encountered two types of mangrove trees—red and black. The red mangroves sprout new trees from a pea pod that has tiny roots and leaves barely poking out. These pods will float for days to months at a time before finally taking root in the mud to create a new tree. And the black mangrove that sprouts by spreading it’s root system and sprouting up from the ground. Both trees have a few yellow leaves, which are sacrificed by the tree to release the excess salt absorbed by the ocean water in which they live. 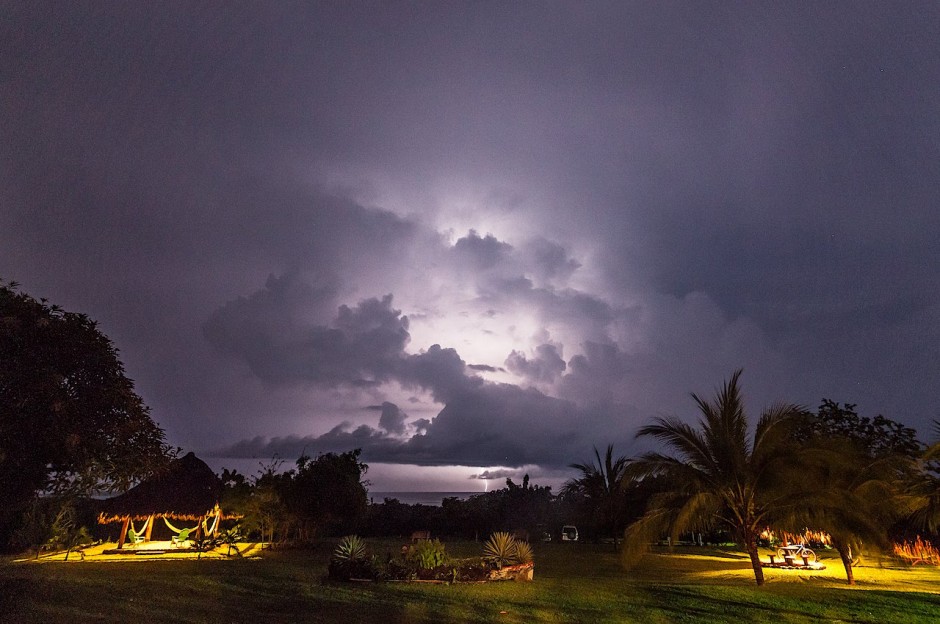 Although September is still in the middle of the wet season, it rained mostly at night, leaving the days beautiful and warm. Each evening clouds would roll in and every few seconds lightning lit up the clouds in a display that rivaled any fireworks show on earth. These storms are themselves a scenic destination in Nicaragua.