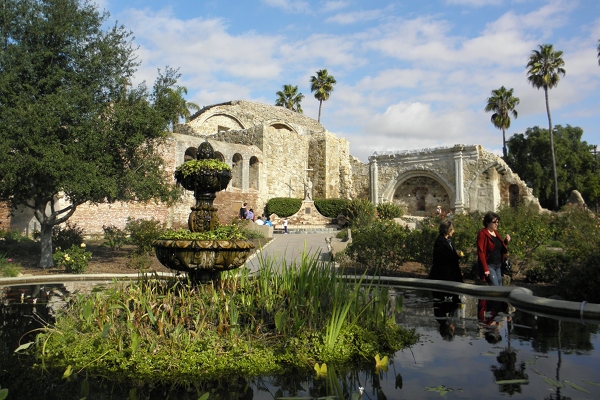 The grounds at San Juan Capistrano / All photos: Author

Matador Nights editor Kristin Conard gets a tour of the OC.

I had never before been west of Las Vegas, and here I was in Anaheim in Orange County, California, for a job interview. I knew the Pacific Ocean was next door and that Anaheim had Disneyland, but the rest of my knowledge of the area came from The OC and Real Housewives.

I didn’t get the job, but thanks to a press trip I was able to arrange, I did discover there’s more to Orange County than I’d realized.

Disclosure: The Anaheim/Orange County Visitor & Convention Bureau organized and sponsored all my activities and hotels, except for the whale watching.

Water sports
All of the coastal towns in Orange County have local options for learning to paddleboard, surf, or sea kayak. If you don’t need lessons, there are plenty of spots to rent equipment.

Hockey
It can be hard to get away from Disney in Anaheim – the local hockey team, now the Anaheim Ducks, started out as the Mighty Ducks – founded by the Walt Disney Company and named for the 1992 film. The team won the Stanley Cup in 2007. Watch games at the Honda Center.

I hadn’t been to a hockey game since elementary school, and the one thing I remembered was there were a lot of fights. I’d figured it was because hockey players just liked fighting. Nope. They can actually help shift momentum. And they get the crowd going.

If you can’t make a game, watch practices for free at the Anaheim ICE. They’re held from September to April, one to three times a week. Call 714-535-RINK for specific dates and times.

Whale watching
I couldn’t fly five hours to California and not go whale watching. I signed up last minute for a tour with Davey’s Locker in Newport Beach. The boat is double-deck; I spent my time up top, which made it easier to see off all sides. 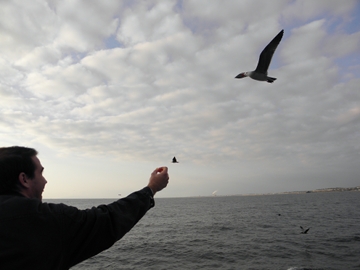 Feeding the seagulls between whale sightings

We followed a gray whale for a while — he (or she) was in California for the annual Alaska-Mexico migration — then spent the rest of the 2.5-hour trip looking for dolphins. Davey’s isn’t the only gig in town; there are several tour operators in and around Orange County.

Dress in layers as it’s colder out on the water. And don’t obsess over getting the perfect whale shot — the motion of the boat, combined with the other people around you all fighting for the same angle, makes for dozens of blurry photos of ocean where a whale was (speaking from experience here). I found it more relaxing once I put my camera down and just enjoyed looking for the puff of steam from the whale spout.

Whale watching runs through late-March/early-April off the southern California coast. 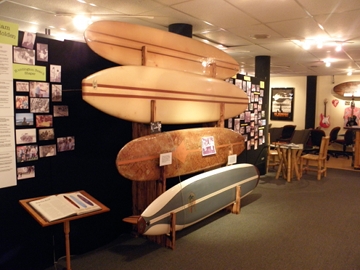 The museum opened in its current location in June 1990. The exhibits start with honoring Duke Kahanamoku, the Hawaiian who brought surfing to the American mainland. Then they focus on the evolution of the board, surf and music, and surf and movies.

The camera used by Bruce Brown to film The Endless Summer is on display.

The museum is small, but famous locals like Bud Llamas are known to hang out there.

Anaheim Muzeo
Muzeo gets its name from the word for “museum” in Esperanto. Split between two buildings in downtown Anaheim, it opened in 2007.

The main building houses rotating exhibits. I saw a display on Russian icons, and upcoming shows in 2011 feature two of my favorite things: gold and chocolate, decadence and deliciousness.

Mission San Juan Capistrano
The only mission in Orange County was built by the Spanish in the late-1700s/early-1800s. Back then, there was a mission along this stretch of coast every 22 miles — one day’s ride on horseback. 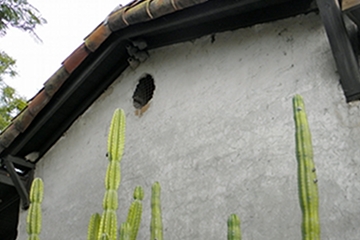 A remaining swallows nest at the Mission.

The grounds have orange trees, a large fountain, and a barracks, and the exhibits show the mission’s connection to local history. Mission San Juan Capistrano is a registered Historic Landmark and a National Historical Treasure. There are daily guided tours, or an audio tour that’s free with the cost of entry.

The mission has a party on March 19, the day that the cliff swallows come back from Argentina each year. More swallows used to nest here, but during a period of restoration work when scaffolding covered the stone church, many of them found other spots. Yet there are still a few nests on the grounds, and each year the bells of the mission are rung to celebrate the birds’ return.

First Thursday’s Art Walk
I happened upon John Eagle, artist, gallery owner, and one of the founders of the Laguna Beach Art Walk, as he was painting on the beach. Outside of New York City, Laguna Beach is home to more artists than any other place in the country. He explained the appeal of the place with a gesture: “the light.”

John explains more about the Art Walk, a free event with food, drinks, and music on the first Thursday of every month, where you can meet artists and see works in progress: 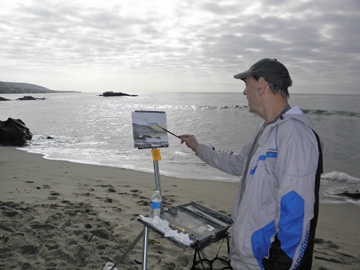 John Eagle painting on the beach

The idea for a monthly art walk came from an artist who had a gallery in north Laguna. His suggestion was to do it on a weeknight, rather than weekend, because parking would be much better at that time.

There were initially only five galleries on “Gallery Row” on Coast Highway participating in the art walk night.

Now the art walk has become a major social event for Orange County, with several thousand visitors attending every month. It became a monthly art party that people brought their friends and relatives to enjoy. There are now approximately 50 fine-art galleries participating every month in Laguna, and the concept has spread to other cities in the country.

The Laguna Beach Art Walk is in its 13th year, and Huntington Beach and Santa Ana also have art walks. Anaheim is in the process of starting one.

Installations and temporary exhibits vary and are spread over two floors and a handful of rooms. 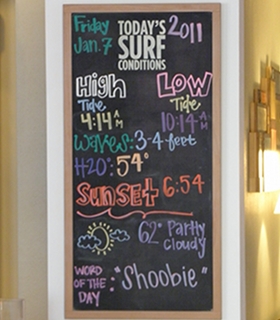 Local surf conditions are posted on the chalkboard next to the check-in desk and action sports photographer Aaron Chang currently has a gallery of surf photos in the lobby. Surf lockers can be arranged, and there are a few boards available for use through the hotel.

As a writer, I was absurdly pleased by the large desks in each room; I hate the tiny little round tables in most hotels.

Hotel Ménage, Anaheim
The streets around Disneyland seem filled with places to stay. Many focus on theme kitsch, at least on the outside: Alpine Inn and Candy Cane Inn, for instance. Or they’re chains.

Something different was Hotel Ménage, a boutique hotel right outside the walls of Disneyland. Which means you can see the weekend fireworks shows from the pool.

There are themed suites (the Asian suite where I stayed was bigger than my studio apartment, and who wouldn’t need two flat-screen TVs in a room?) that seem ideal for a romantic stay in Anaheim, along with traditional rooms, and the hotel has a restaurant where nothing on the menu is over $10. Also, there’s a bar pool-side. 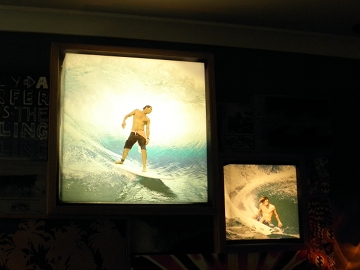 Some sexy surfers to watch over me as I sleep

The red-tiled roof hotel has a series of “Surf Suites” that were decorated by designers from companies like Billabong, Ripcurl, and Quiksilver. Each is different.

I stayed in the Billabong Men’s Suite, with walls decorated with a light-up painted surfboard and a mixed media piece featuring surfers.

The beach is just a few minutes’ walk, and the hotel can hook up chair, towel, and beach umbrella. The rooftop bar has views of the beach and the high-priced homes of the Laguna Beach hills.

Huntington Beach is famous for surf, and records have been set there: Californian Beats World Record for Longest Surf Session.

Orange County is also home to one of the Best Nude Beaches in the World.

Tagged
Lux Travel Insider Guides
What did you think of this story?
Meh
Good
Awesome