THIS PAST SUMMER, my husband Jorge and I undertook an epic Western road trip. We went to the Badlands and Yellowstone, both of which were phenomenal and delivered on the Western promise of sublime wilderness, but it was Glacier that captured us.

We spent two full weeks of our month on the road in its campgrounds, on its trails, in perpetual fear of its grizzlies. By 2020, park brochures warned us, all of the park’s glaciers will have melted. We felt we’d gotten there in the nick of time, although the pleasure of having seen these landscapes before they’re destroyed is a vain one indeed. We were reminded in Glacier’s mountains of how small and fleeting we are, and also how terribly significant. 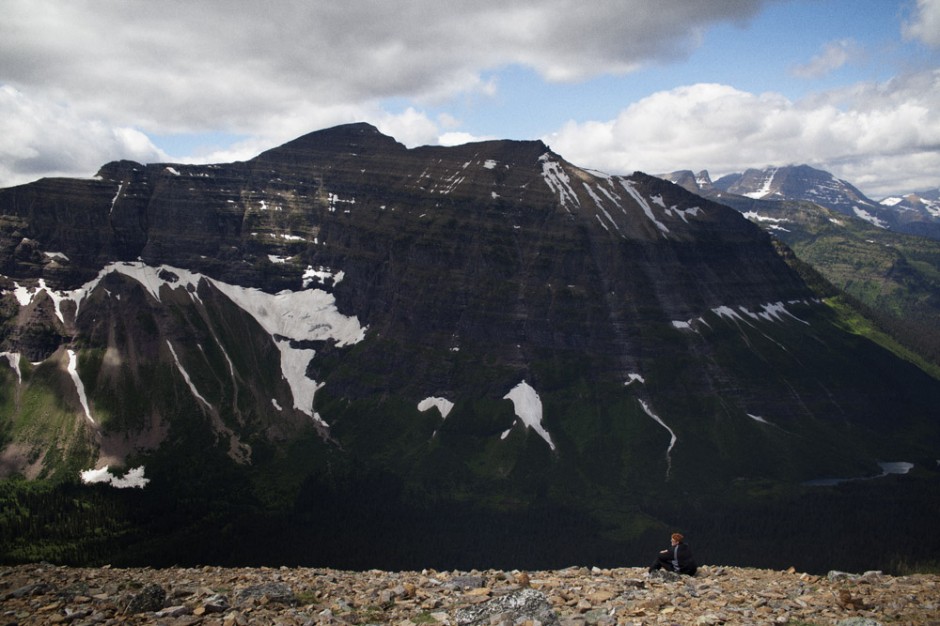 The eerie serenity of this photo belies the 80 mph winds atop Dawson Pass, which whipped our shouted words back down over the Two Medicine Range and almost forced us to turn back. I had to crawl part of the way over the pass so as not to be picked up by a gust and carried away into the huckleberries. Still, the terrifying wind made the experience of coming over the lip of Dawson Pass that much more awesome; suddenly, we went from blind switchbacks to supreme alpine panorama. This was the first pass of several on the 17-mile Dawson-Pitamakan Loop, which starts and ends at the Two Medicine Campground. 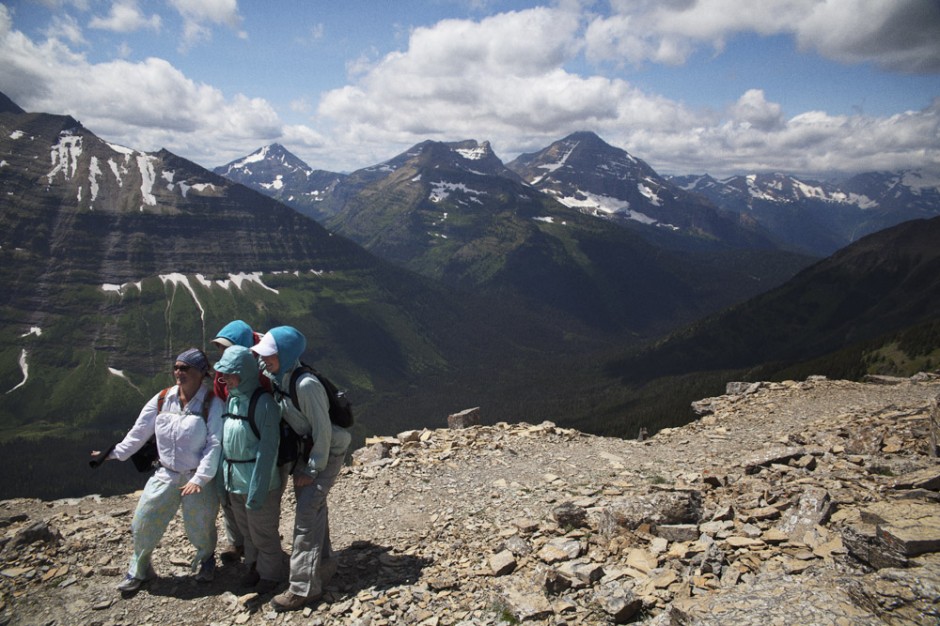 We met Chris, the woman in white, the day before on a hike to Cobalt Lake. She's from Whitefish, which is now #2 (behind Missoula) on our list of US places to live. We'd hiked down from the lake, chatting, and then said goodbye and figured that was that. Then there she was, around the bend 8,000 feet up, out for a leisurely 17-miler. She was guiding friends from New Hampshire, and they braced themselves against the blasts to get their shots of the sublime West. 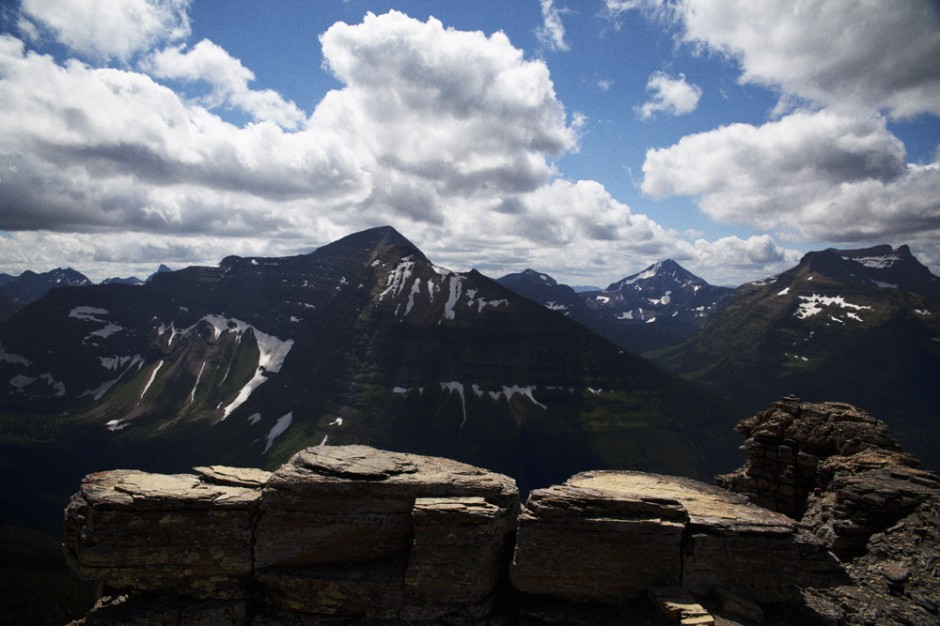 Pitamakan Pass, the last stop before a 9-mile descent past Old Man Lake and out Pitamakan Valley to Two Medicine. 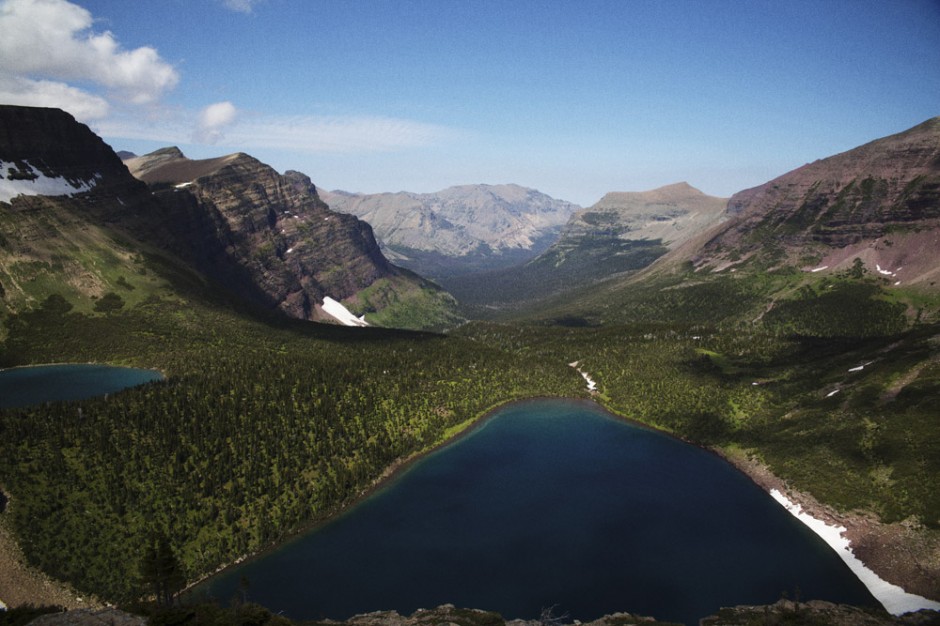 En route down to the Pitamakan Valley. The wind created phenomenal time-lapse quality skies. Clouds stormed over the lakes and valleys, dying the water emerald and purple and cobalt. I love that sense in the mountains that I've become vulnerable and insignificant (unless I get too vulnerable, which is terrifying), and the skies that day were Montana classics: huge, changing, and epic. 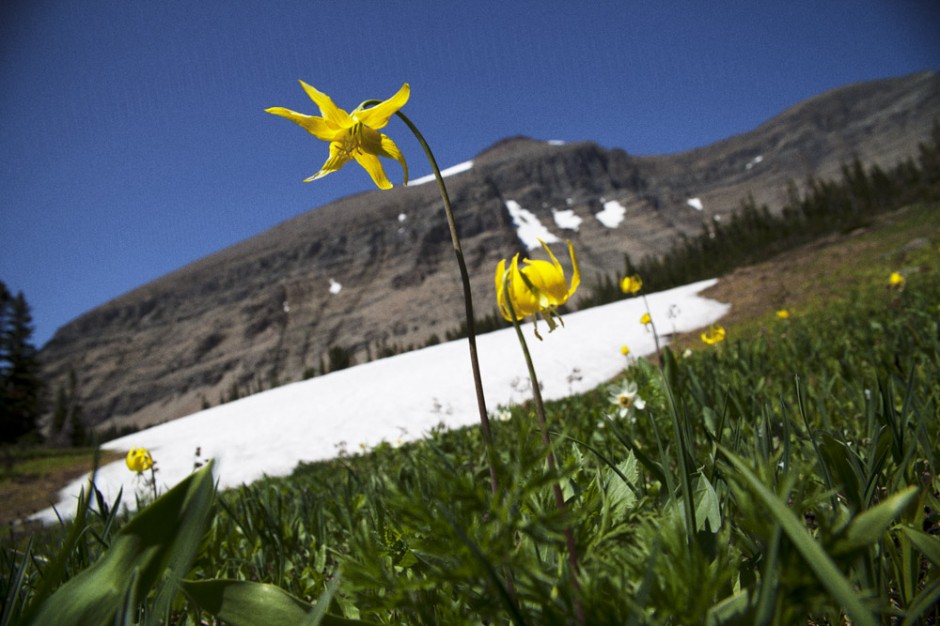 The lilies are stunning, but for us they were a mixed blessing. Grizzlies love to dig up the roots, so whenever we saw them we whooped it up like pendejos, as Jorge would say, making noise to let whatever bear might be gorging on lily bulbs know we were coming round the bend. At the end of this 10-miler, we saw our first grizzly. It was terrifying. We were maybe 200 meters from the trailhead, talking, and there he was. He looked at us; we backed up. We did not run. Once we got around a bend we whooped, hoping to scare him off, but he didn't budge. There was a family behind us without bear spray, so we waited for them and then passed the grizzly together, me in front and Jorge in back. It watched us the whole time, but did nothing. I remember only the feeling of the bear's eyes, and then the father in the family shouting, "The road, the road!" when it finally came into sight. Tremendous relief. 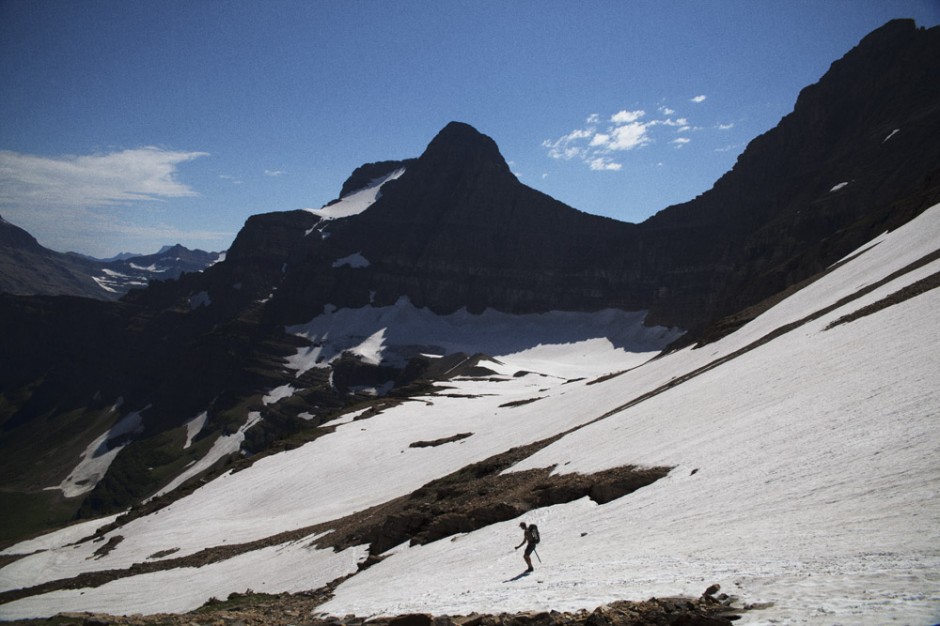 Descending the Sunrift Gorge Trail, which had only recently opened because of dangerous snow and ice conditions. We weren't brave enough to risk gliding down these huge drifts; earlier in the season a ranger slipped on one, fell several hundred feet, and was seriously injured, so we were cautious. The sound here of roaring glacial runoff was dense and incredible. 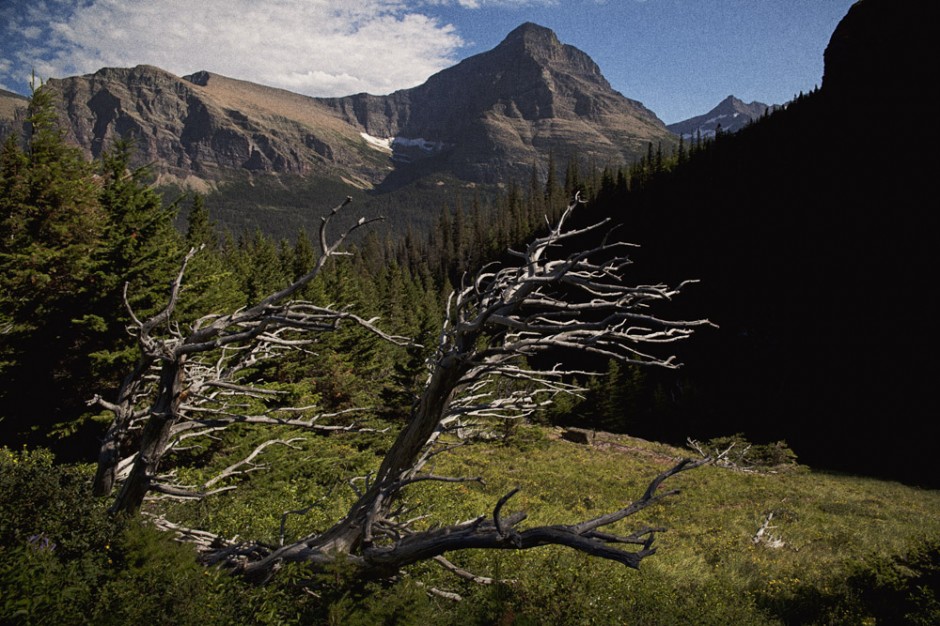 The winds in Glacier can be insane, and these bald leaning trees are a constant. The badass female ranger we met called them "Zen Trees;" they were particularly stunning on the Scenic Point Trail at Two Medicine. 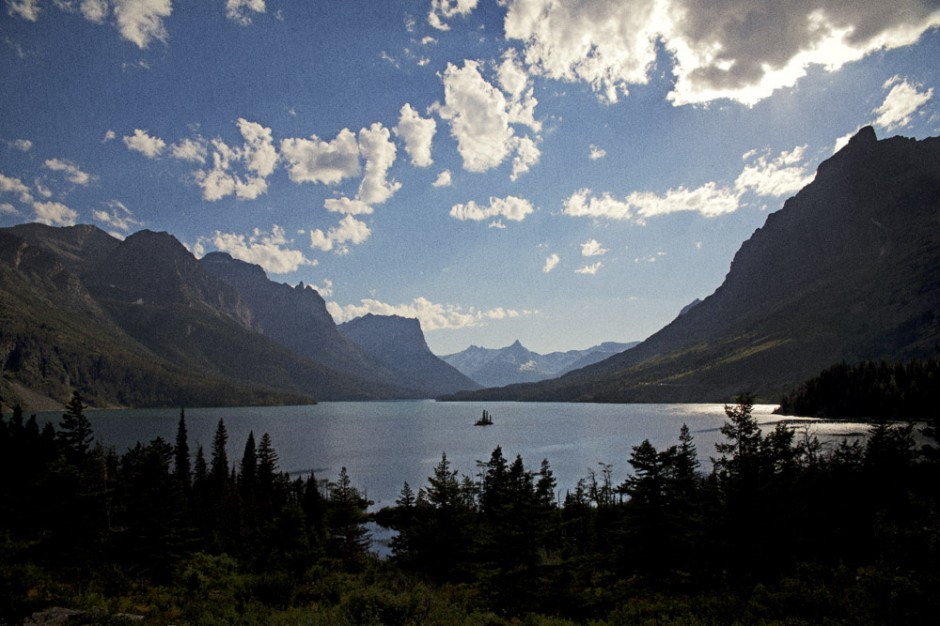 Moose Island, a stop on the Going to the Sun Road. It took awhile to get this shot because the red Glacier shuttles are always disgorging a hodgepodge of sandaled European and American tourists. There was one American guy wearing a sweatshirt that featured a Golden Retriever riding in a convertible with the caption "America: Land of Freedom," which for me would've been great enough, but even better was that he'd paired that sweatshirt with a ball cap that read: "Pacifico: La Cerveza de Mexico." Oh, America. Sometimes in the national parks the human sideshow distracts from the wilderness. 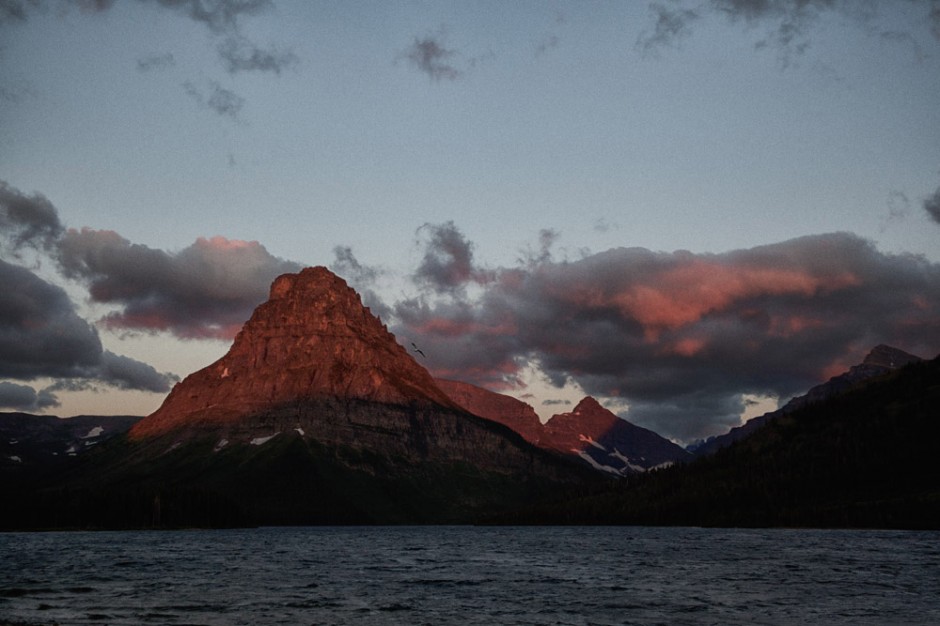 Sunrise at Two Medicine, just before we embarked on an epic quest for a campsite at Many Glacier, which often fills up by 8am. We left at 5:30 to score a site. 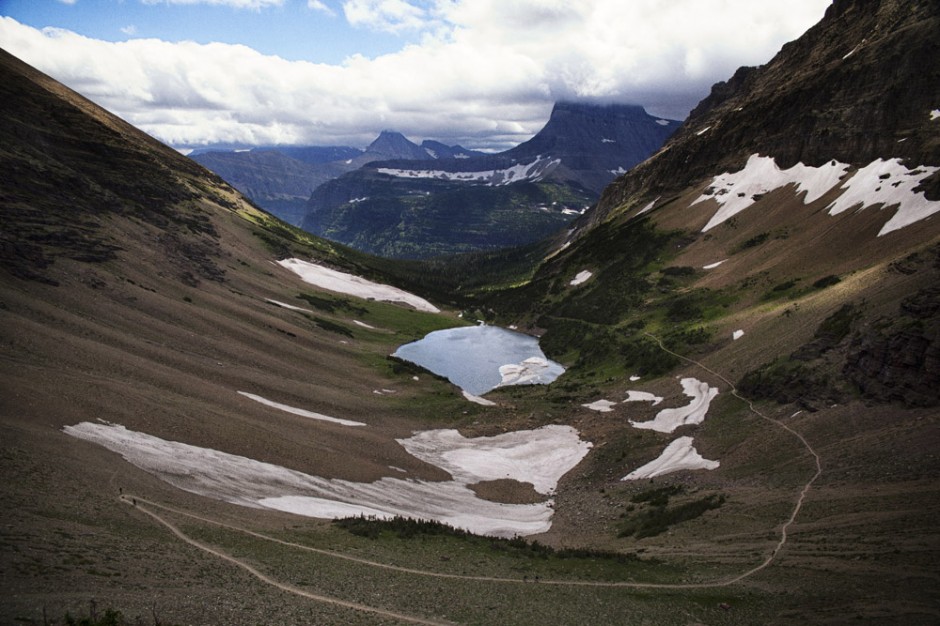 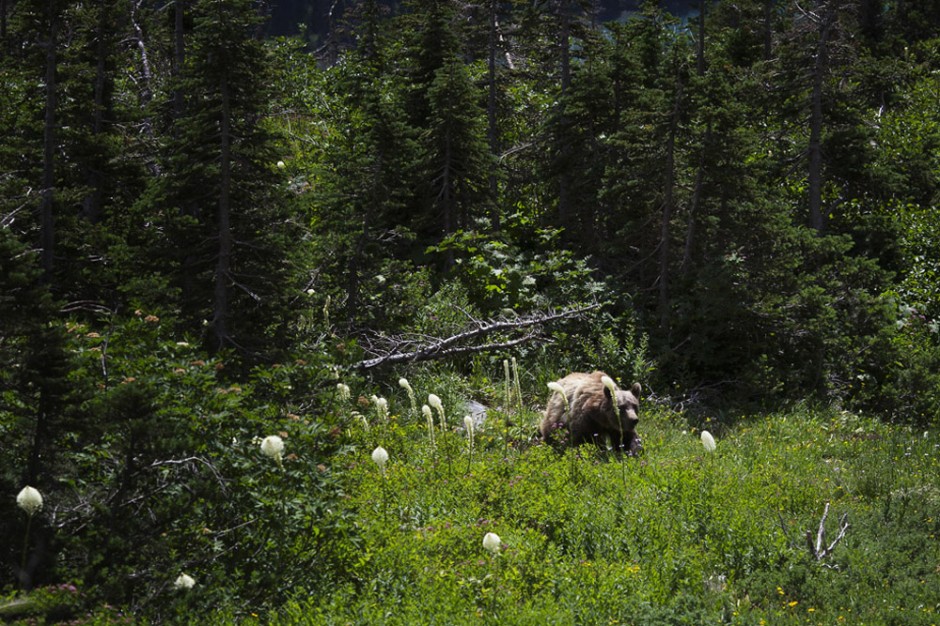 Grizzly sighting on the Grinnell Glacier Trail. This was just before I hissed through my teeth at Jorge, "Do you want to be one of those dumbasses whose camera shows the grizzly approaching just before he gets eaten?" We turned back at my insistence. I was shocked by how many people treat bears so casually; one woman ran right in front of this bear to catch up with her husband. It's incredible more people aren't taken down. 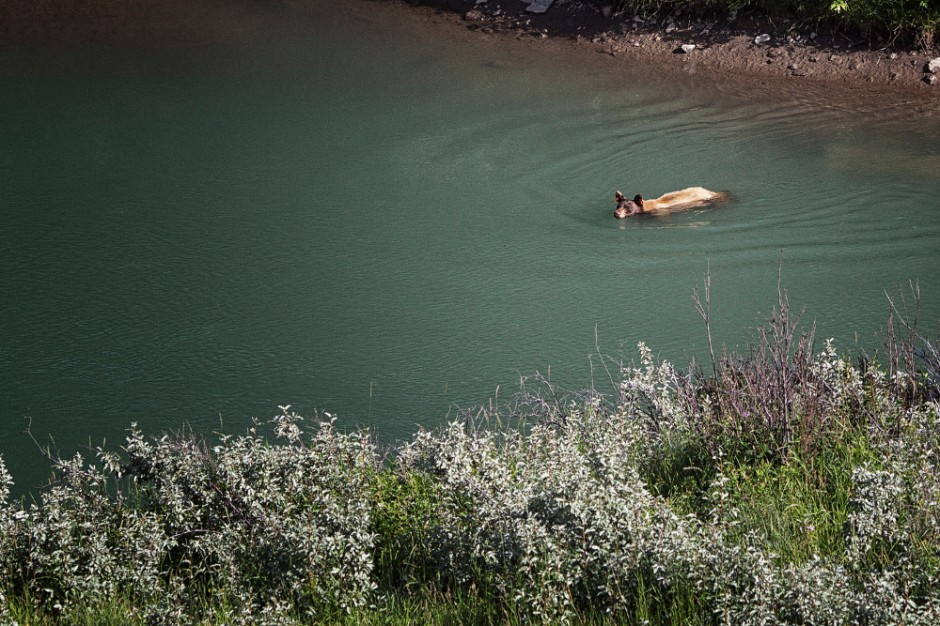 Grizzly Sighting #4, at the Sherburne Dam just outside the Many Glacier Campground. Jorge said as we were driving from Yellowstone to Glacier, "You know, I just have a feeling we're going to have luck with wildlife." Well, luck is a very relative term. But I suppose if you define it in terms of dramatic sightings, yep, we lucked out. 4 grizzlies, mountain goats, moose, marmots, ptarmigans, and bighorn sheep. There was an entire press corps of photographers with pornographic telephotos watching this guy. 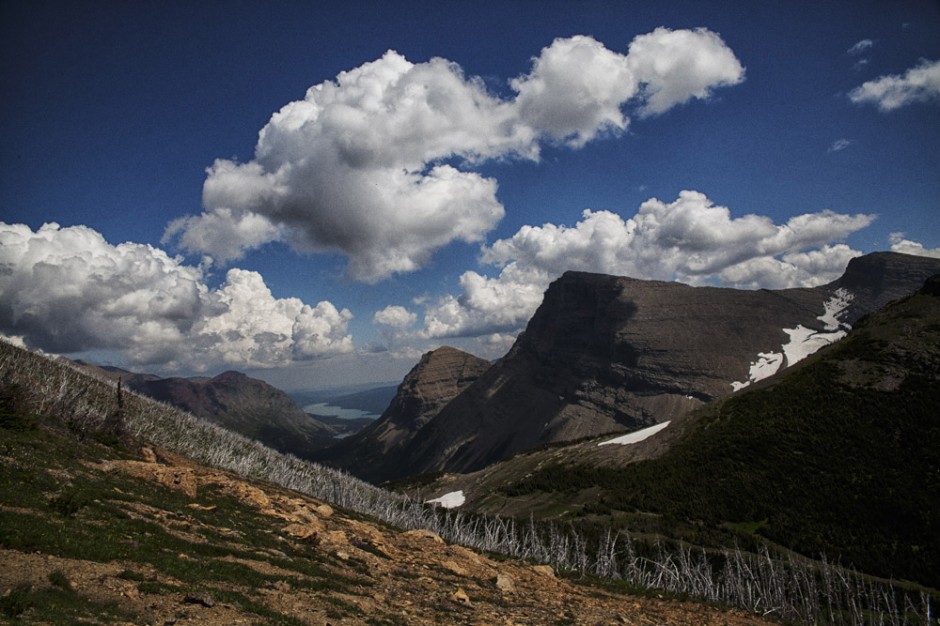 The descent from the fire lookout tower above Swiftcurrent Pass, where we met Bud, a fire lookout who lived all spring and summer at Glacier and hopped over to Thailand in the fall and winter. Bud had worked his whole life on the railroads, then retired and adopted a monastic life getting to know all the surrounding peaks, scanning for flame, and befriending a marmot family. "Watch out," he said. "Gus will take off with your stick. A Chinese guy turned around for a second the other day and it was half chewed off." 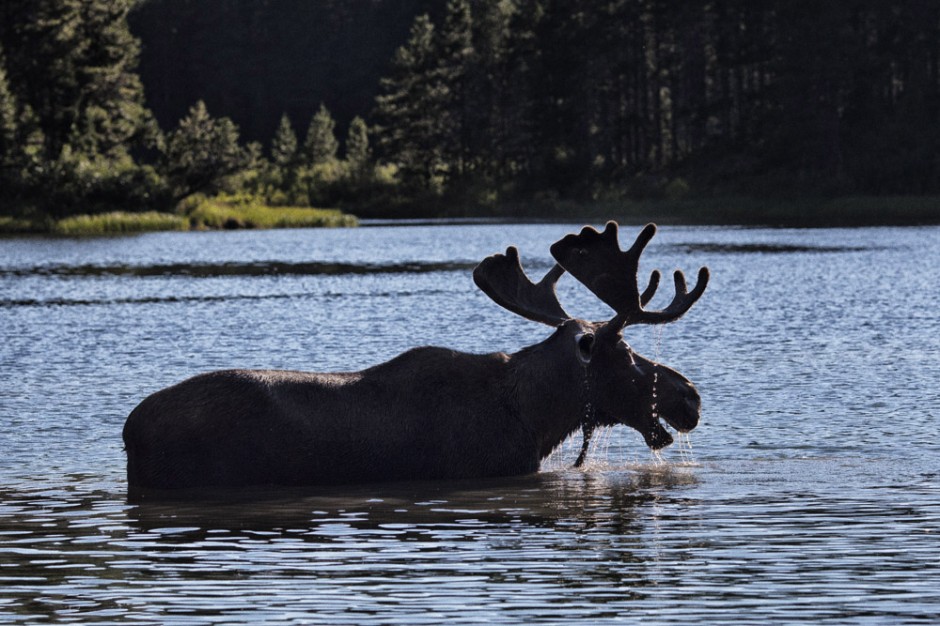 .7 miles beyond Many Glacier Campground. We'd been drinking Moose Drool every night before we saw this, and Jorge thought the name was just a cute little conceit. Turns out, nope, moose go rooting around for weeds that sprout in the lakes in summer. They dunk, chew, and drool. It's mesmerizing. 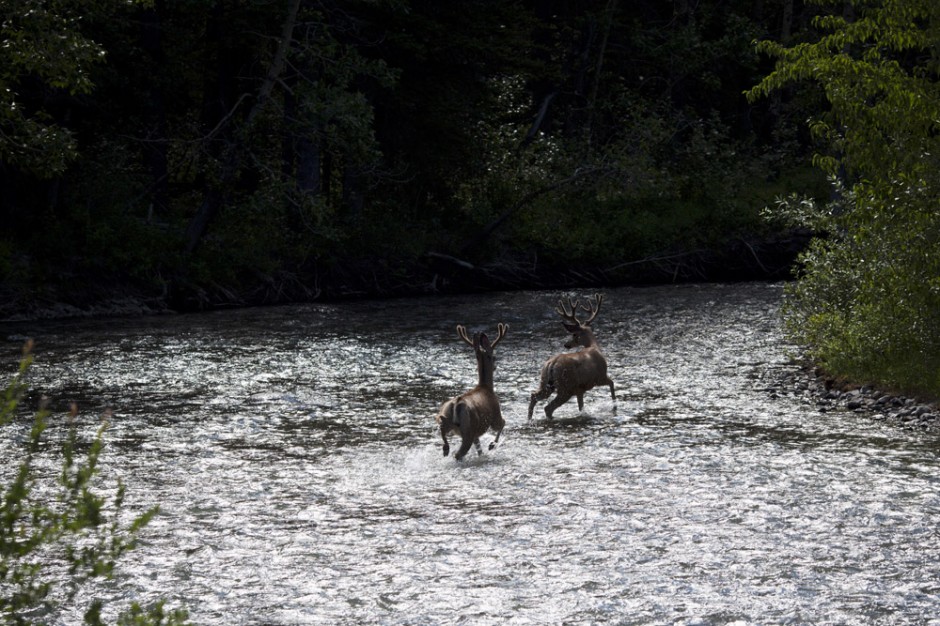 Mule deer fleeing through one of Montana's many pellucid rivers, just outside the Many Glacier Campground, where it is worthwhile to drive slow and not be singing along at the top of one's lungs to Lila Downs -- there's almost always something grazing or running or meandering in the streams or meadows. 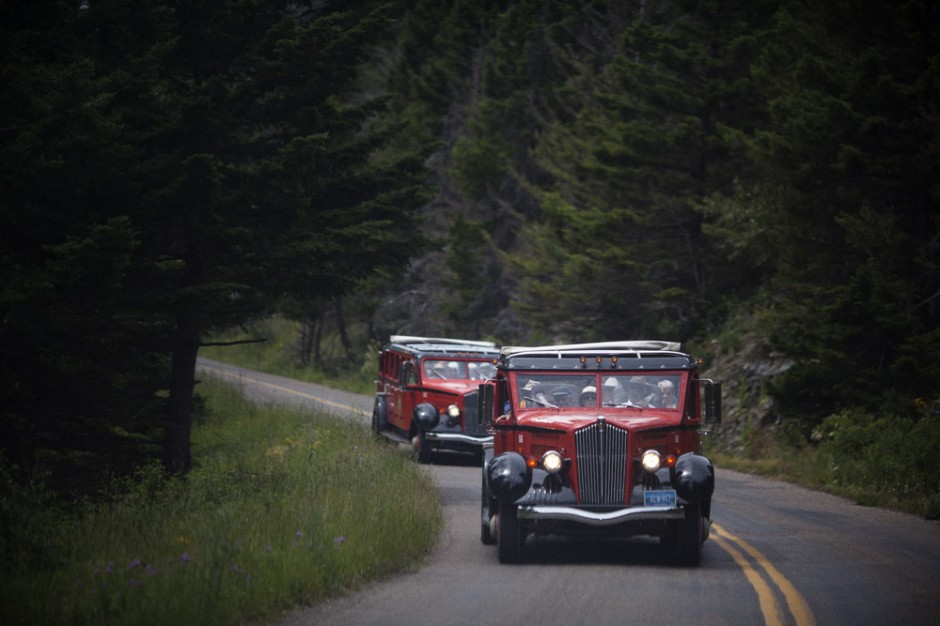 The Glacier shuttle coming round the bend. A ubiquitous site around the park, and an endearing one even when it means your photo just got invaded by 30 chatty tourists in vests and unfortunate sock-sandal combos. 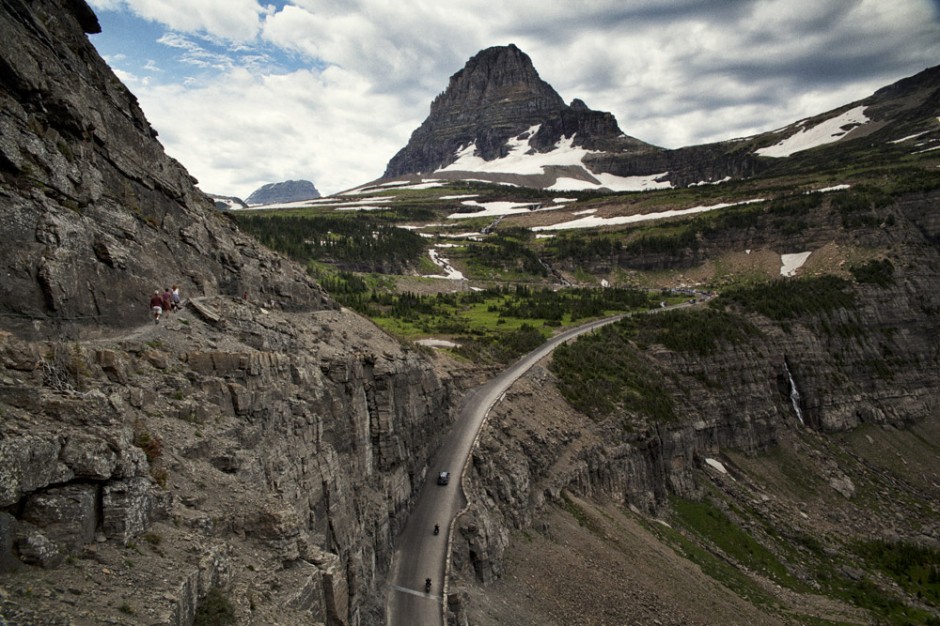 Going to the Sun Road

The Going to the Sun Road rising to Logan Pass. While we were at Glacier a mudslide closed off a section of the road. We were extremely lucky -- we were driving through a sudden, blinding rainstorm and decided to pull over because the conditions were so intense. When the rain calmed somewhat we started up again, and a car coming the other way slowed. The driver rolled down her window and told us that several cars had been hit by a mudslide and that we shouldn't go any further. Turns out no one was injured, but the road remained closed for the next several days and the damage was visible long afterwards. It is tempting to see this as yet another consequence of the melting glaciers and extreme weather from record high temperatures. 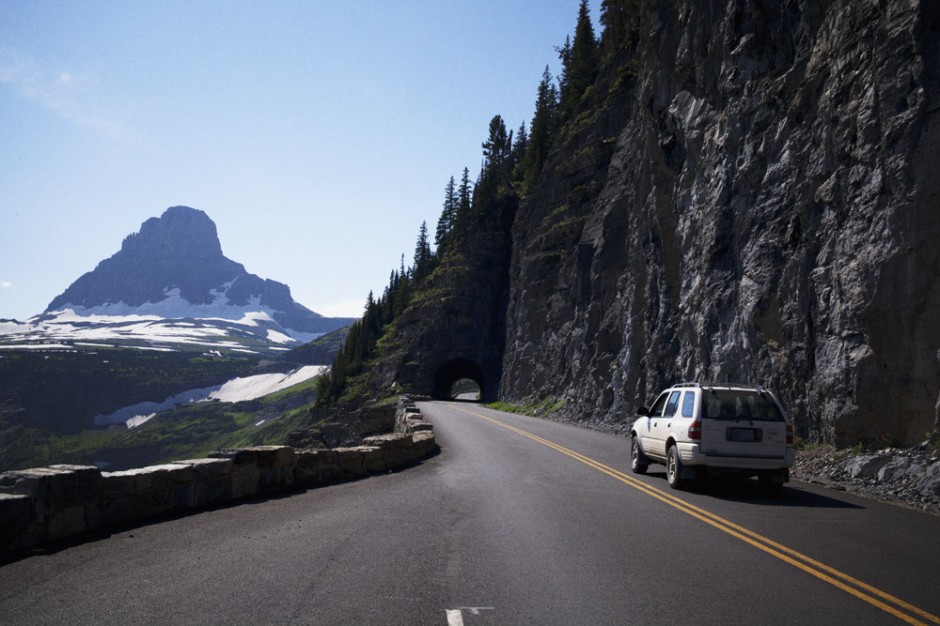 Driving the Going to the Sun Road, which winds past weeping walls of summer waterfalls, through tunnels, under glaciers, and beside spectacular glacial lakes.