LAST MONTH, I spent a weekend hiking in what locals call Parque de Mil Lagos, or “Park of a Thousand Lakes,” because though Cajas National Park actually harbors around 270 glacial-melt lakes and ponds, when you’re hiking in this backcountry their count seems infinite. The vast wilderness of El Cajas encompasses a unique mix of biodiversity — from high-alpine páramo to cloud forest and humid wetland — which is one of the reasons UNESCO has designated it a Natural Heritage Site candidate.

Both the Inca Trail and the Continental Divide cut through Cajas. The name of the park comes either from the Kichwa word cassa, meaning “gateway to the snowy mountains,” or simply caxa: “cold.” The Spanish word cajas translates to “boxes,” which probably refers to the compartmentalized bodies of water sprinkled over the land like shards of glass reflecting the sky, and which flow to both the Pacific Ocean and Amazon River. 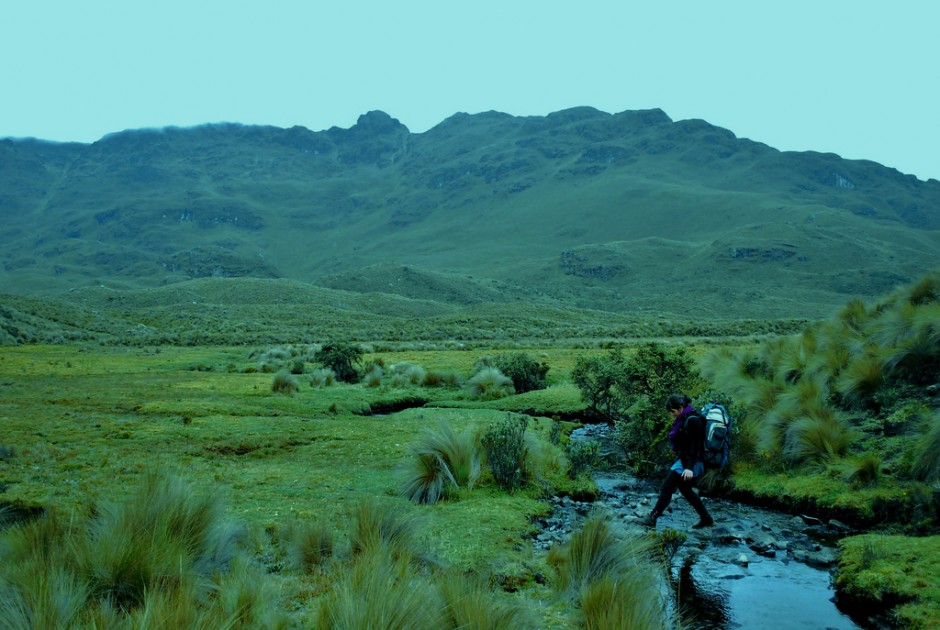 I met Rocio at a bar in my barrio of Guapulo, Quito. A 27-year-old Chilean with adult braces and a tendency to overuse the colloquial term bakano (meaning "awesome"), she came to Ecuador to visit her best friend who'd left Santiago for Quito two years prior and never returned. The country's capital is high in the Andes, and at nightfall clouds drain into the valleys like milk pouring into a cup. We struck up a conversation on the terrace while observing this phenomenon when a full, yellow moon rose up out of the fog, the lights of my colonial town twinkling below. She pointed to it like the Buddha and said "bakano," the first of many. I invited her on my trip to Cajas, about 30 minutes from Ecuador's third-largest city, Cuenca, and 9 hours from Quito. We left together three days later. 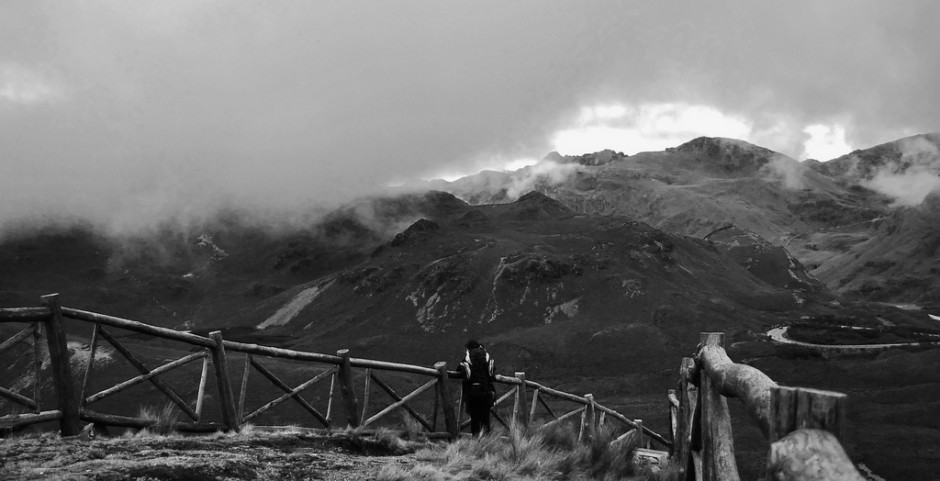 The bus dropped us on a highway of clouds. The east-west road you can see cutting through Cajas in a serpentine course at the right of this photo is, oddly, the best place in the park to view llamas, as we sighted more in that half-hour bus ride than in our entire weekend in the backcountry. After some searching, we found the trailhead we were looking for, with no visible trail to justify it. Instead, a blue sign (the color of our chosen route) was stuck in an overgrown field in the shape of an arrow pointing vaguely over a cliff. A steep staircase climbed up a hill close by, so we went for that instead. Thirty minutes later, at the top and out of breath, we read a sign that said No Salida. No Exit. 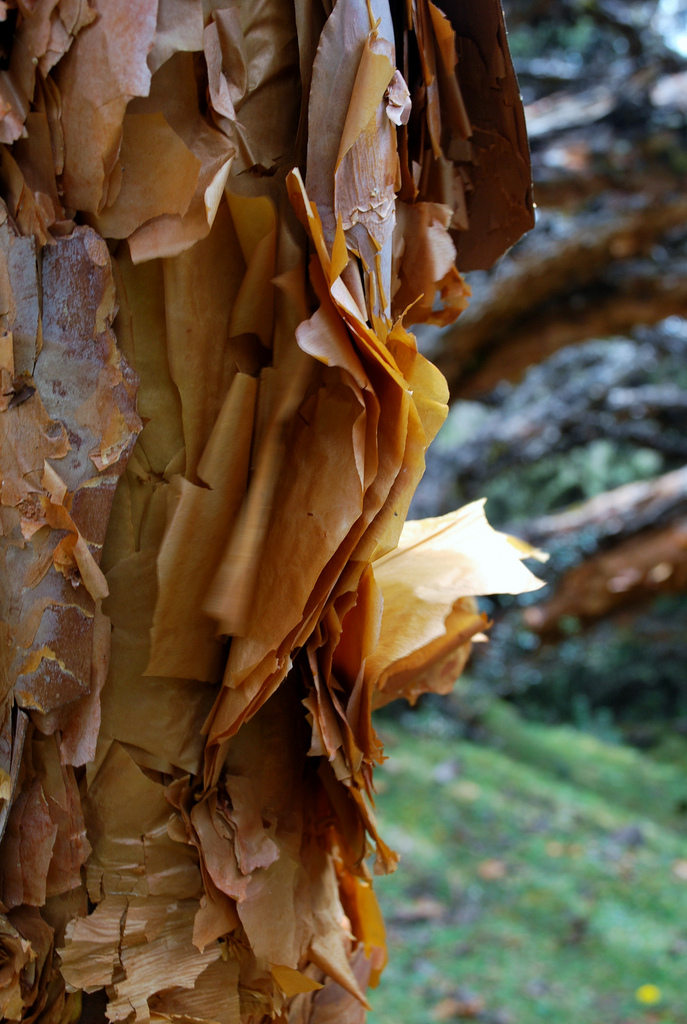 Three hours later we wandered into the polylepis, or "paper-tree," forest. The polylepis are a group dwarf species endemic to the Andes and make up the highest-growing woodlands in the world. Its name stems from the Greek poly, meaning "many," and lepis, meaning "layers," which accurately describes the countless pages of papery bark that easily peel away from the trees and protect them from the elements. Touching this unusual specimen is like leafing through old, old books, and creeping through the quiet mystery of its forests is like being in Fern Gully, with odd mushrooms growing in the lush marsh below. 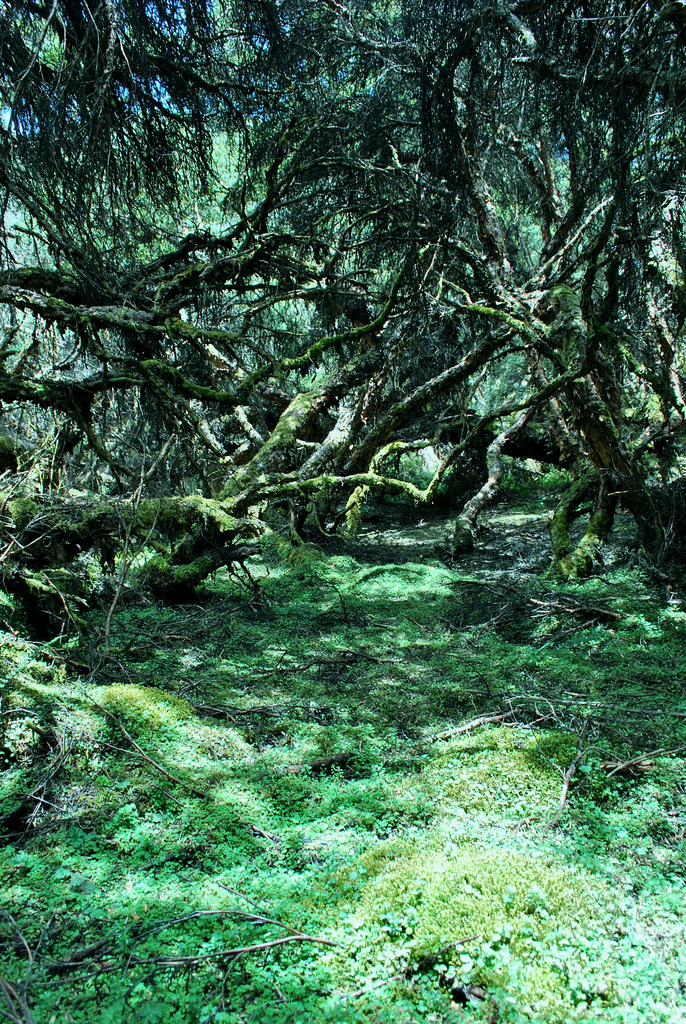 Badasses of the badlands

The polylepis symbolize survival, as they grow through some of the harshest conditions on the planet. Their story of endurance is told through the twisted, gnarled knots of trunks that make up the forest, lending it a fairy tale feeling, and the greenness of it all is overwhelming. I have no intention of obscuring my nerdy excitement over these forests: They are the badasses of the badlands. 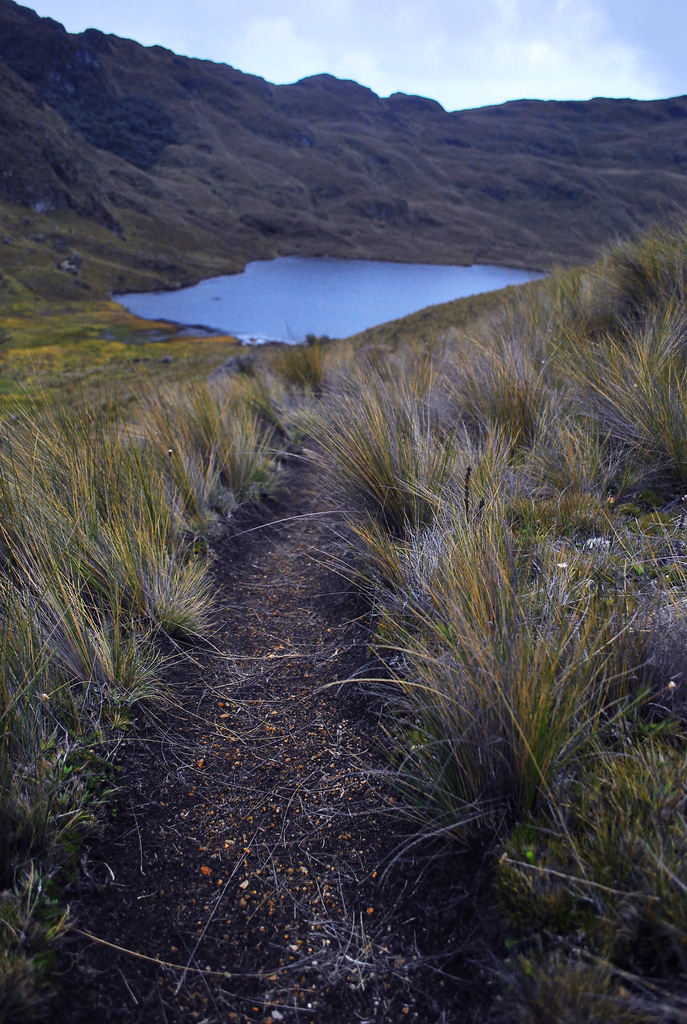 Cajas is easy to get lost in, and we did many times. The routes are barely marked, the sameness of the landscape is disorienting, and low-hanging clouds drain into the park in the afternoon, sealing the deal. 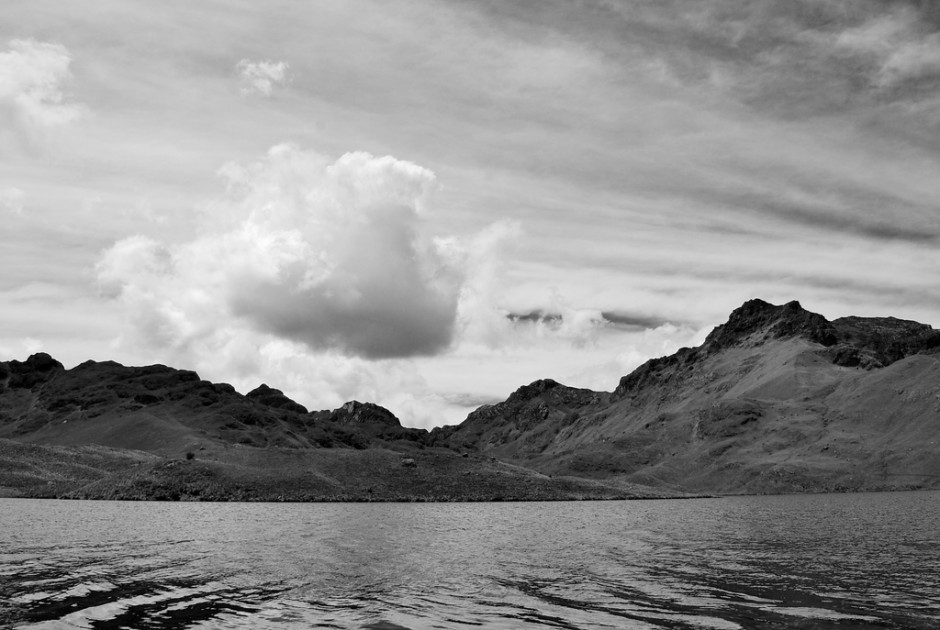 Extending over 78 hectares, Laguna Luspa is the largest lake in the park. Some of the lakes here are 16,000 years old, dating from their glacial origin. We woke with the sun on our second day and hiked to its side. This is a more intimidating view of Luspa. 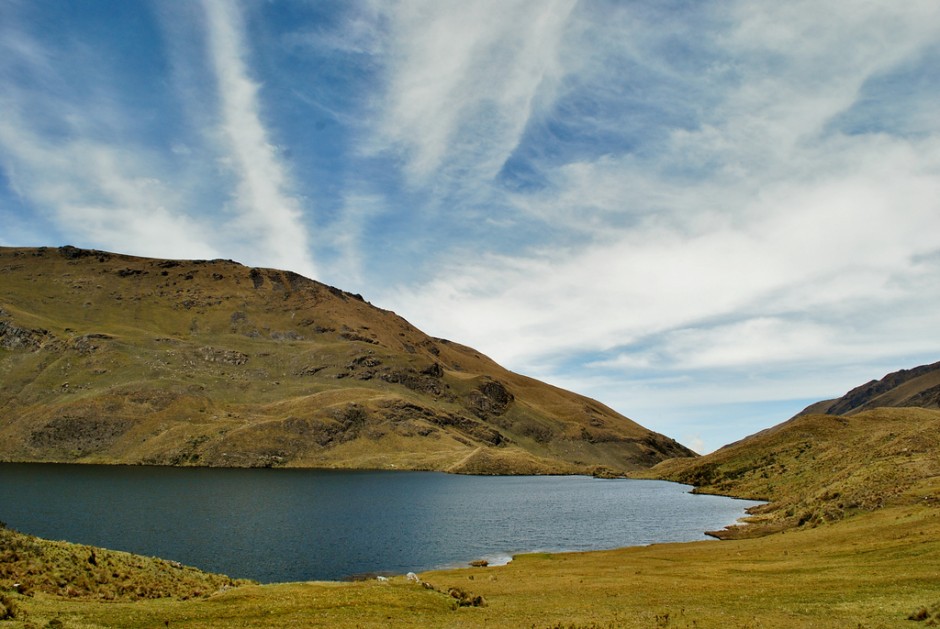 We watched clouds shoot across the sky in this trippy paper-fan design. Lying on a dry patch of grass by the lake, I noticed small dots of gold by my right ear, which Rocio quickly 'identified' as hongos magicos: magic mushrooms. We then realized we were sitting in an expansive field of them. 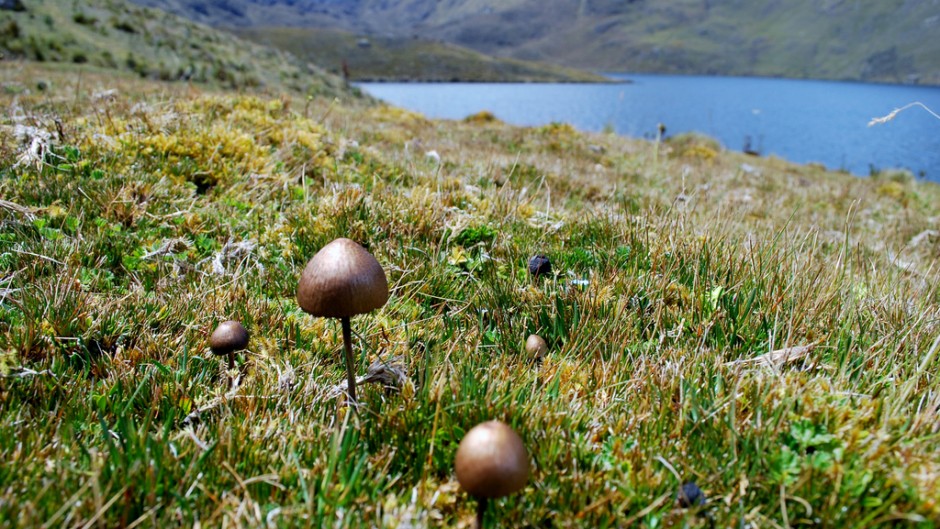 But Rocio was wrong, and we’re lucky we didn’t die of some fungal disease. 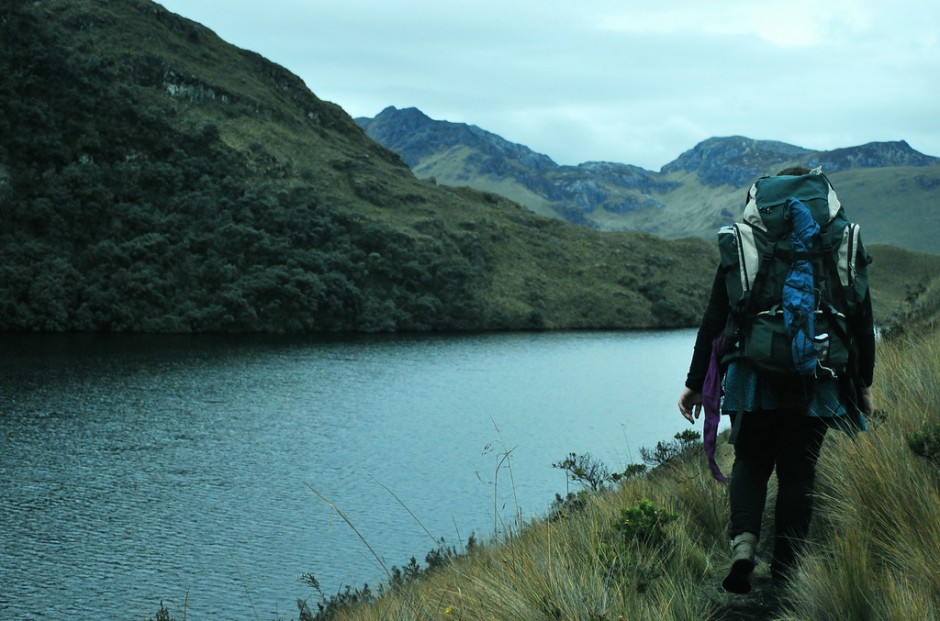 As its name would suggest, we followed Laguna Larga, or Long Lake, for a long time. The site is popular with locals for its trout and salmon, and we greeted some fishermen further along. 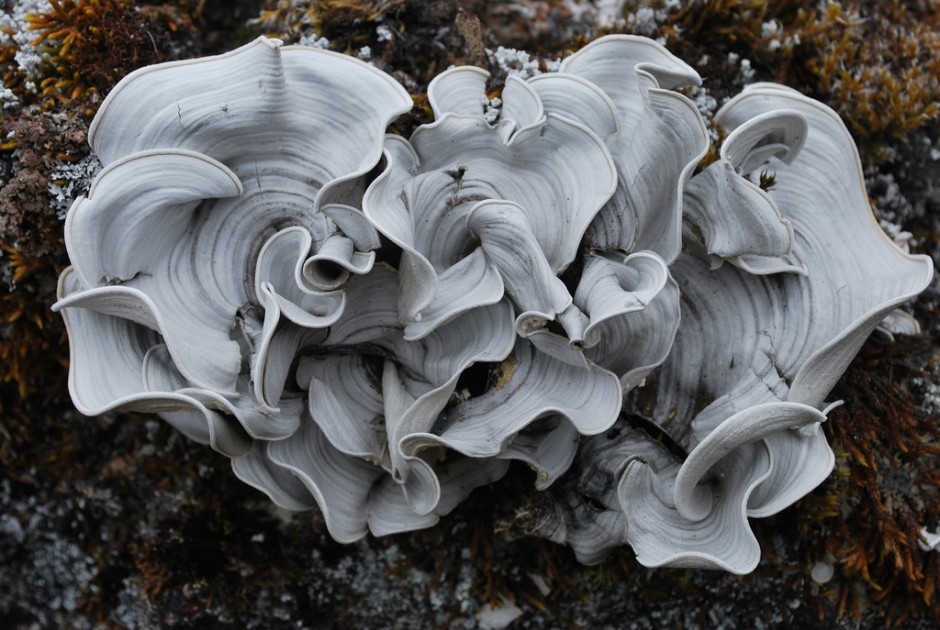 After the last Ice Age, the land in Cajas National Park came to be completely layered with volcanic ash, which could have arrived from any of the multitude of volcanoes populating the Ecuadorian Andes. All the strange plants that grow in the park originate from the ash, like this funky mushroom. The highlands of Cajas are basically overgrown tundra. 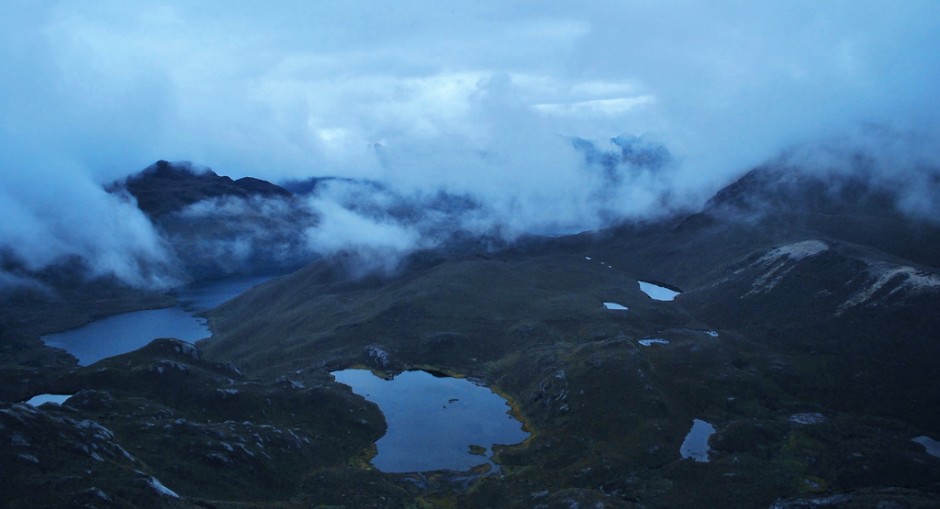 After getting lost for the umpteenth time, I was pretty well adapted to the quirks of the park. We were prepared for the conditions, had enough food, and I’d studied the map religiously for weeks ahead. But Rocio responded with the opposite sentiment and yelled out every few minutes "Donde estamos?" Where are we? "I don’t know," I’d answer each time, followed by, "but it’s okay!" At the summit of a particularly tall hill, the clouds parted and I was awarded this view. It was better than OK. 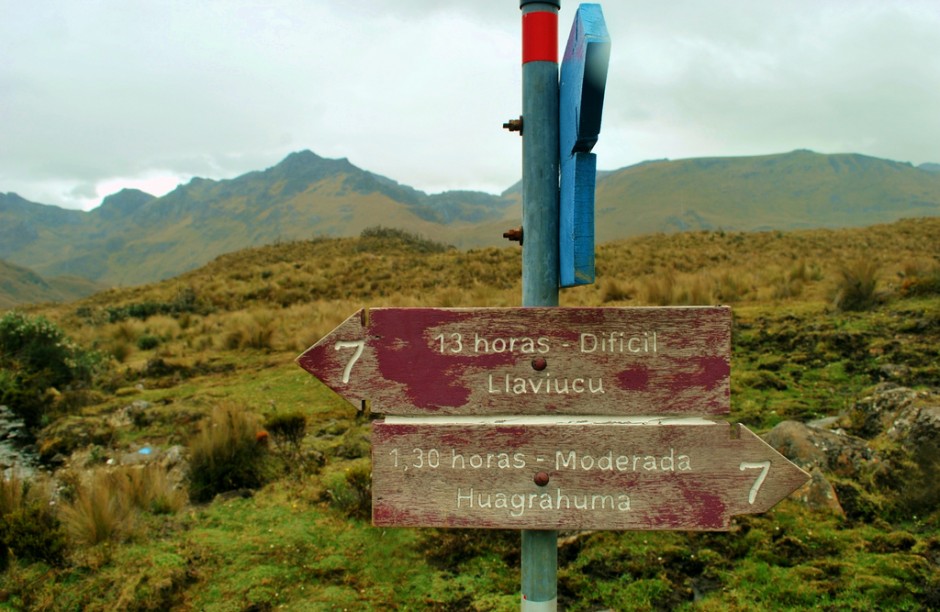 To walk the red route to Llaviucu (a lake and park entrance sharing the same name) is to walk in the footsteps of the Incas. The trail was probably extended northward from Peru into this region by the tenth Incan emperor Tupac Inca Yupanqui when he finally defeated the indigenous Cañari and conquered southern Ecuador. The nearby city of Cuenca was to be his second Cuzco, but all that was left after the Spanish conquest came a generation later were ruins. 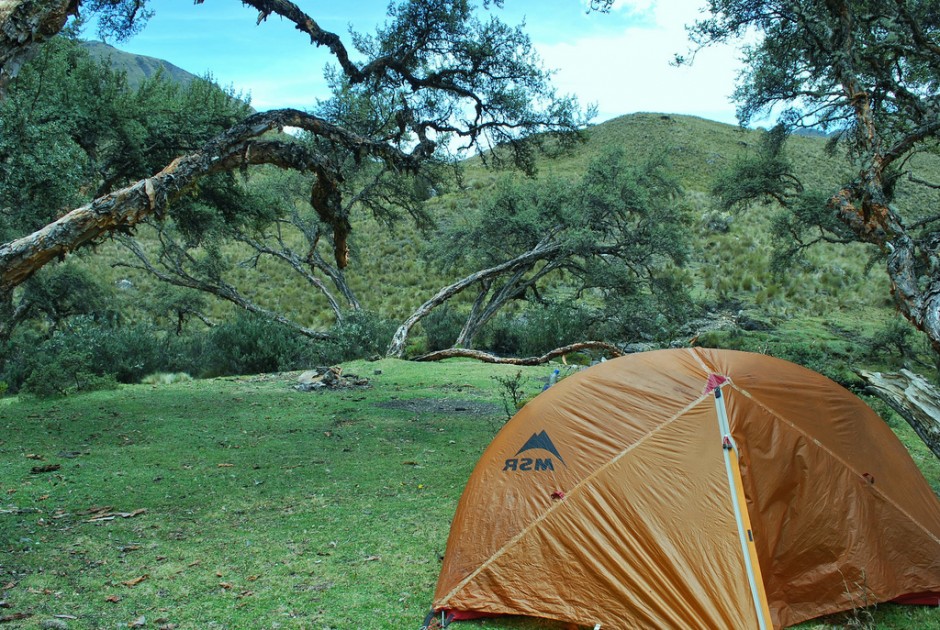 We camped in the polylepis, and what was magical in the daylight became spooky at nightfall. The cloud cover rendered stars invisible, so the darkness was a profound one. In the middle of the night, I was awoken by a hole of light directing into my tent. The clouds had parted and a crescent moon shone, casting twisted shadows onto the tent. 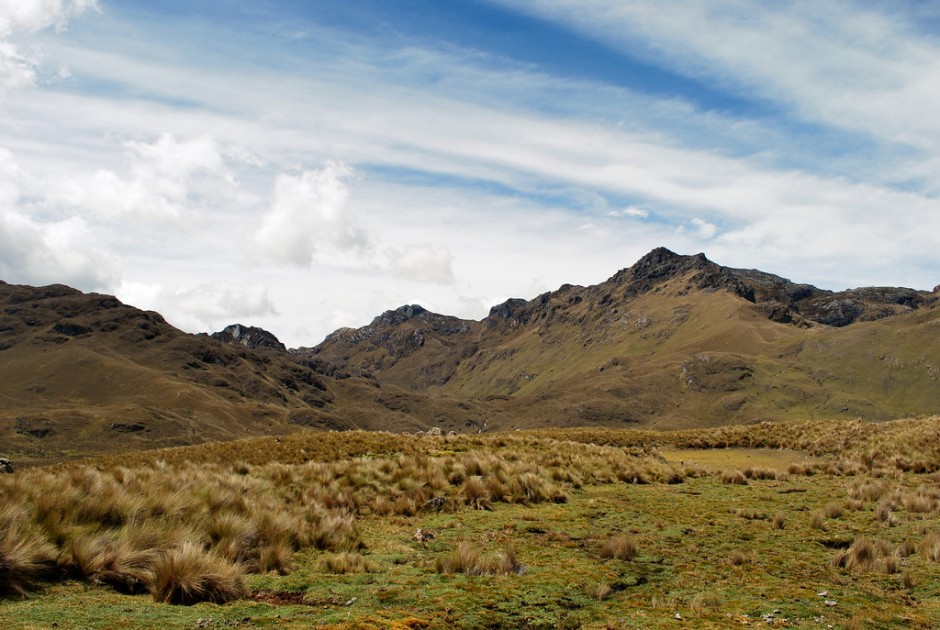 The wind brushes the grassland, making the scene appear painted. This apparent meadow is indicative of the marshy páramo, one of the strangest terrains I’ve walked on. Its surface was spongy, giving my calves quite a workout and causing my ankles to ache for days. For a moment I felt like I was walking on clouds, until my foot would sink into the doughy earth. Páramo literally translates to "wilderness" or "badlands," and figuratively means "solitary area." 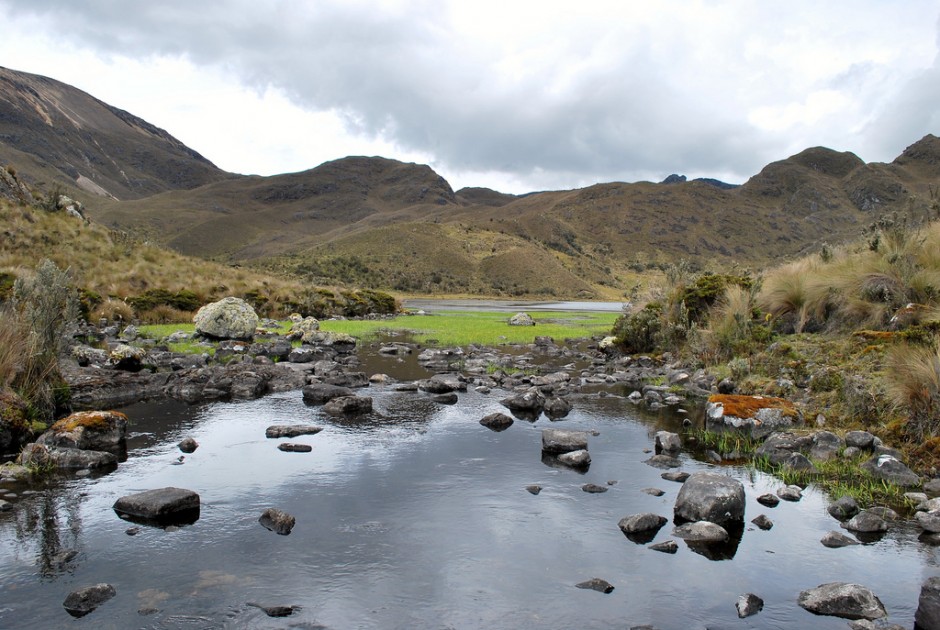 If you’re ever crossing a wide, freezing creek on wobbly stones with a heavy backpack on, you should definitely stop to take a picture. The photo almost looks better vertical, further highlighting its mirror effects. 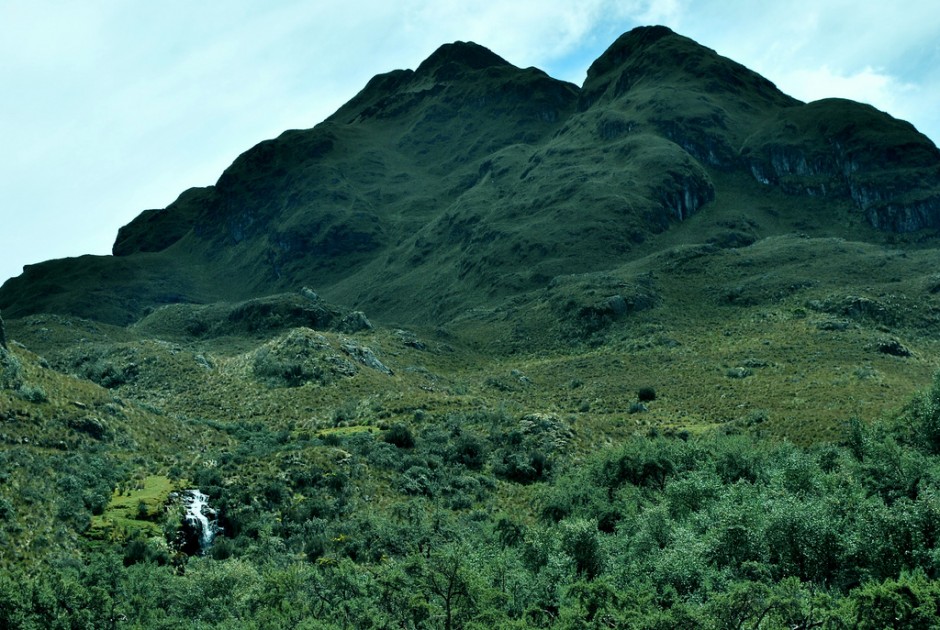 The mountains in Cajas appear velvety green in texture when you’re not too close or too far from them, reminiscent of the long skirts worn by indigenous women in the Ecuadorian sierras. Here they act as a backdrop to the polylepis forest and a waterfall beside it; the trees like to grow alongside creeks and falls.

We’re lucky to feel so small sometimes. After taking this picture, I approached Rocio, who nodded toward the lake and uttered, “Bakano, no?” 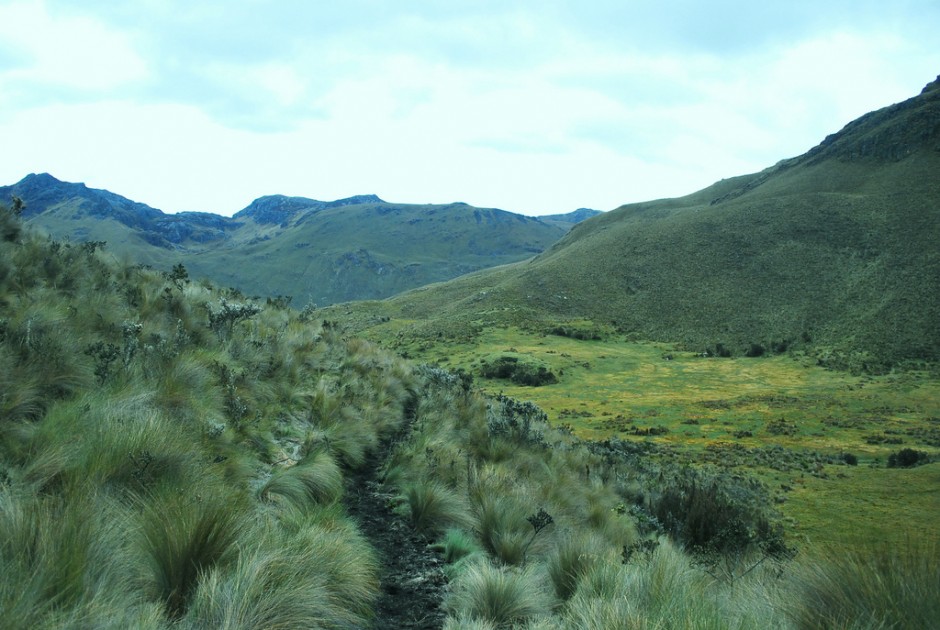 It was difficult to differentiate the llama paths from our elusive track. The hills were striped with these parallel lines that often disappeared into nothing, only to reappear later, sometimes within minutes -- other times, hours. Then we’d sight a rock with a patch of blue paint marked upon it, and knew that we were on the right path. My lack of concern over the situation unnerved my companion, and her celebratory reaction to every single sighting of the rocks made me giggle. 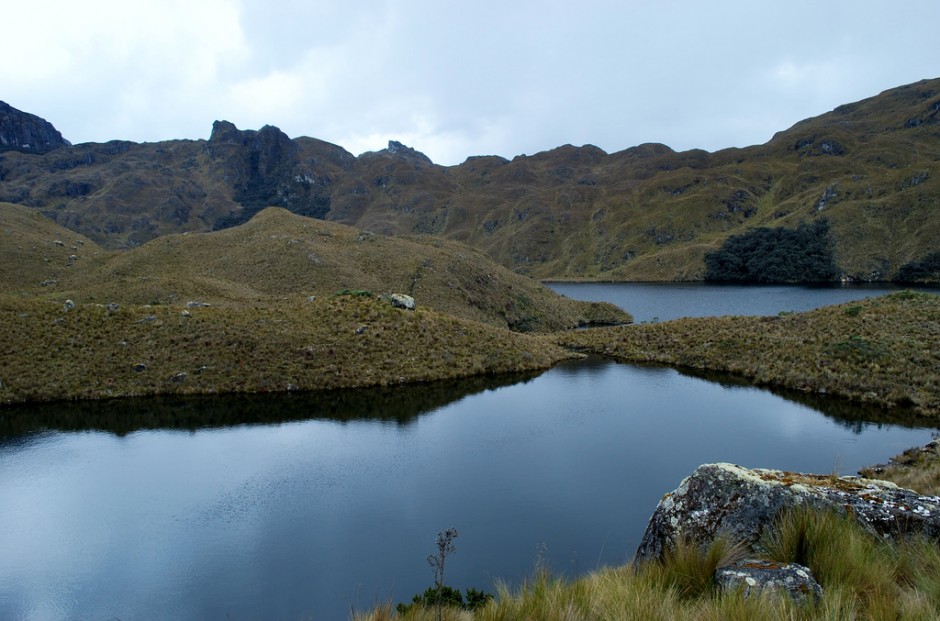 The lagos and lagunas in Cajas have a metallic sheen to them, but a closer look reveals a soft tickle of wind on the water causing little waves to float on its surface. The recurring blue and green notes of the landscape create a harmony embodied in this photo. 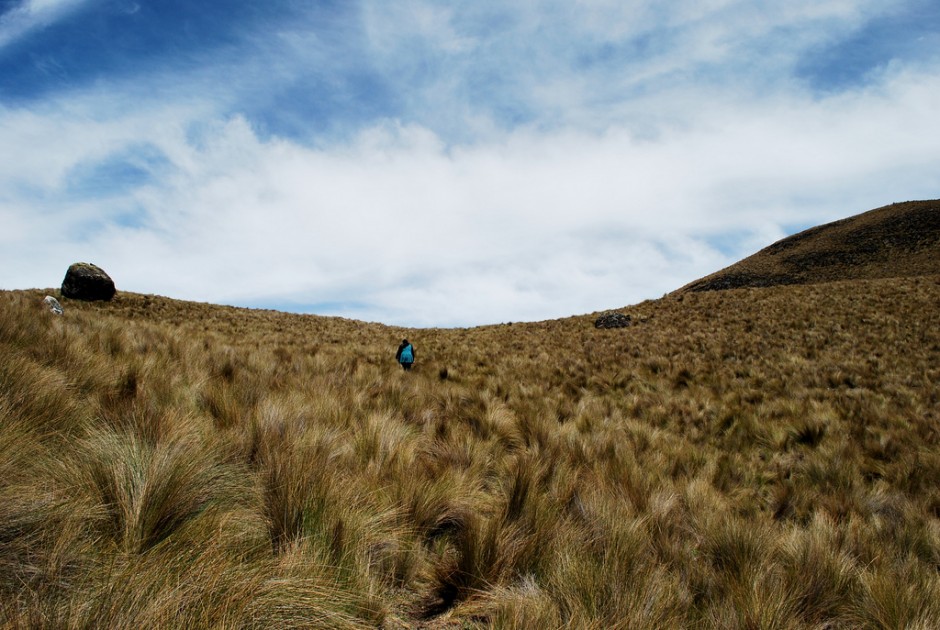 Beneath the dry strands of grass lives an ecosystem rich in organic material with the ability to retain water. It seems Cajas is an example of extremes, as the intense solar radiation in the area is of great value for plant, animal, and human life. We didn’t know this at the time, and often took our breaks lying on the grass, fully exposed. Walking away, an odd sensation would linger in my skin that I can only describe as ‘cooking.’ I would run my fingers through the soft strawgrass that dominates the region, sometimes pulling on its threads to help me up a steep climb, or just for fun. Its feel reminded me of a horse’s mane, and we became insignificant in its midst. My longing for this experience is what brought me to Cajas, a particular beauty that it offered in abundance.

Tagged
Hiking National Parks Ecuador
What did you think of this story?
Meh
Good
Awesome