View all travel news
Top Destinations
Top CitiesView All Destinations
Trending Regions
Trending Cities
Load More
AfrikaBurn is a Burning Man regional event held each year on a private farm adjacent to the Tankwa Karoo National Park in South Africa. The festival has grown from a thousand in 2007 to the five thousand who came in 2012.

AS WITH BURNING MAN – which takes place annually in the playa of Black Rock Desert of Nevada – AfrikaBurn takes place in a remote region, with access only by a 250km dirt road.

It also follows the precepts set forth at the original Burning Man, including a Leave No Trace camping philosophy, community effort organized by camps, and radical self-expression.

With wine in one hand, camera in the other, Tom Holder documented the following. 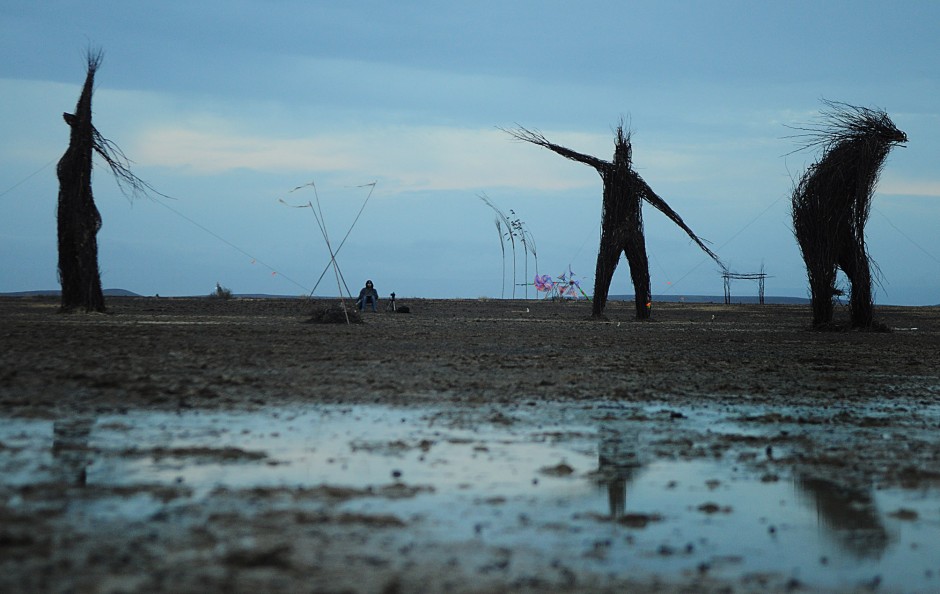 Burning Men in the Morning

Early morning, about 6 am or maybe earlier. The desert was filled with photographers capturing the morning night, some still reeling from the night before. The man sitting in the middle was doing time lapse photography and was on about 2000 frames when I chatted to him. 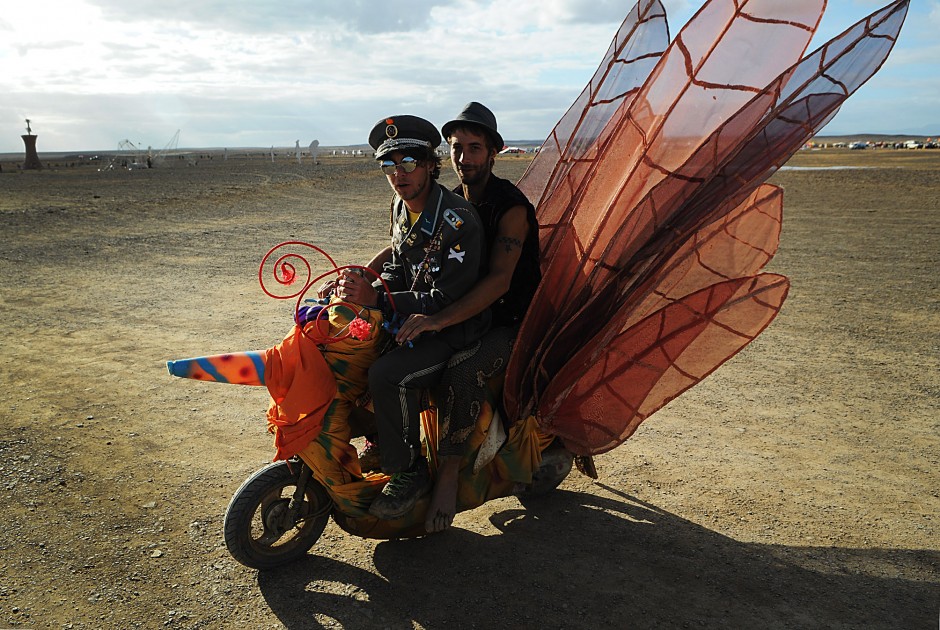 There are plenty of weird and wonderful machines called mutant vehicles. 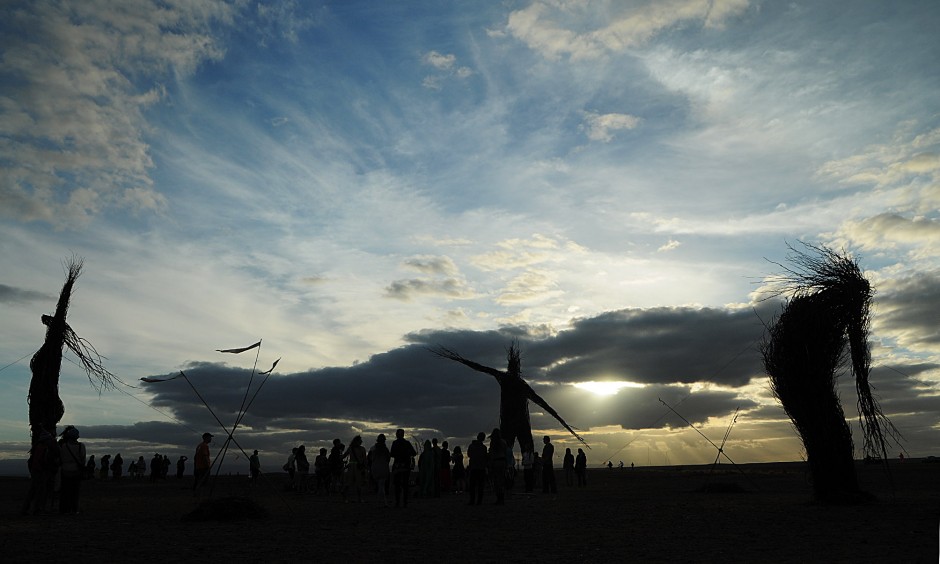 People would walk around looking at statues. On this occassion, there seemed to be some kind of pagan-style wedding. The couple had a priest of sorts, and there seemed to be a procedure of communicating with nature through patterns of stones and candles. The couple wore dressed in robes, naturally coloured, and flowers in their hair. I decided not to impose on their wedding day, but took this picture of the people and sculptures simultaneously silhouetted, and only realised the wedding was on was I came closer. 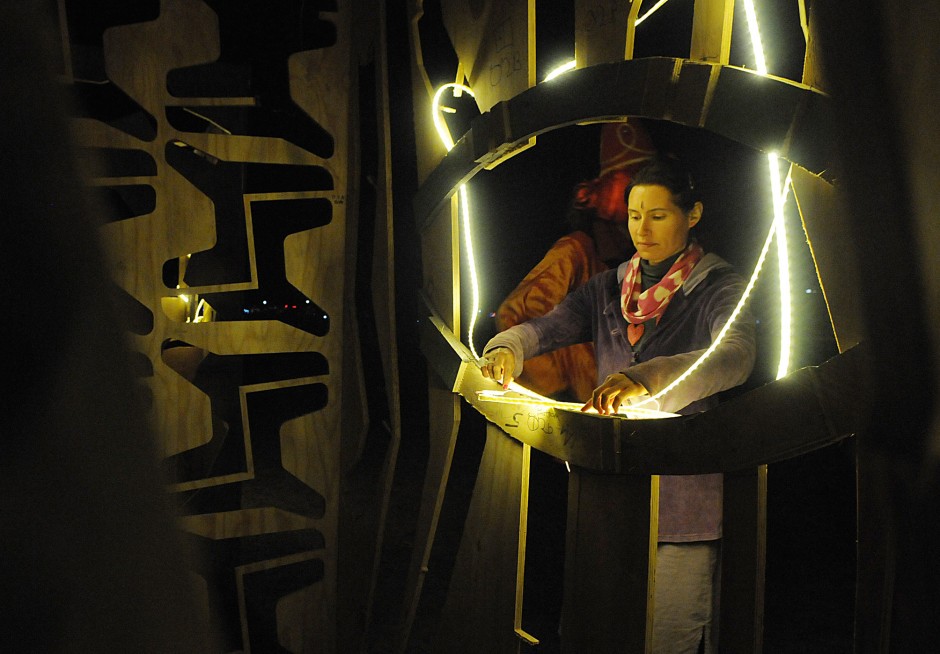 This lady was placing string-lights, powered by a generator, on the statue that was four letters: MOOP, which stands for 'Matter Out Of Place' and is one of the integral concepts of "leave no trace". There cannot be any Moop, which is anything that does not belong, and must be properly removed or stored, taken back to where it came from by those who brough it there, reenforcing the RESPECT - RETHINK - REDUCE - REUSE - RECYCLE - RESTORE concepts. This was interested as this sculpture is exactly that, matter out of place. 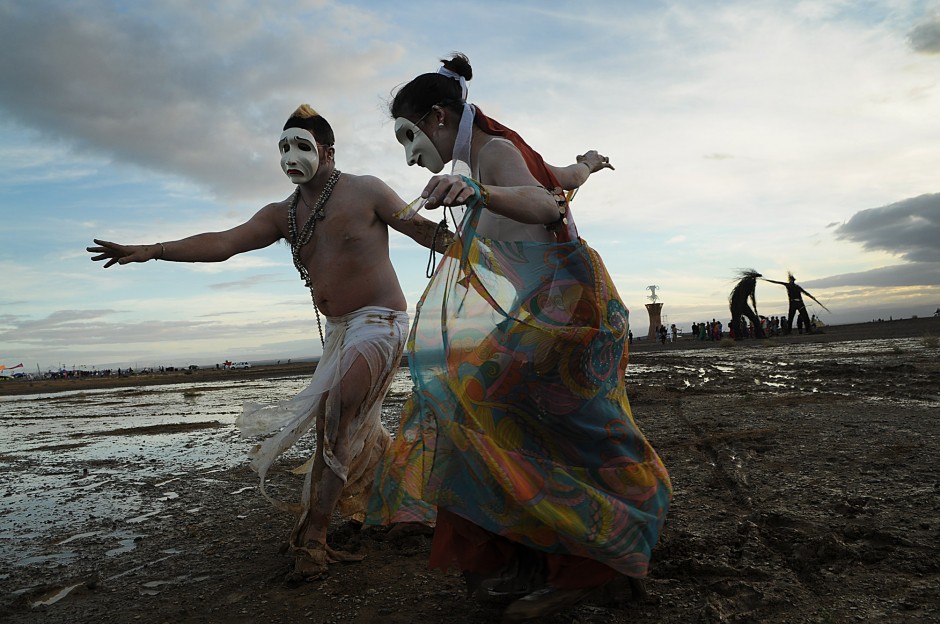 Giving or gifting is a central concept in Tankwa Town. One way of doing this is to perform, sculpt or literally gift objects or artworks. This pair of performance artists were dancing in the mud for a few minutes. They seemed to be acting out a story, perhaps of two lovers, as they intertwined with each other, often looking at the crowd as if seeking reassurance that they were right in their action. Their dance continued for a few minutes until they scampered off to the next stage, another patch of mud or open ground. They seemed to choose areas that had few people, acting out their story for no-one, yet still making sure that once people came and watched them, that they were part of the performance. 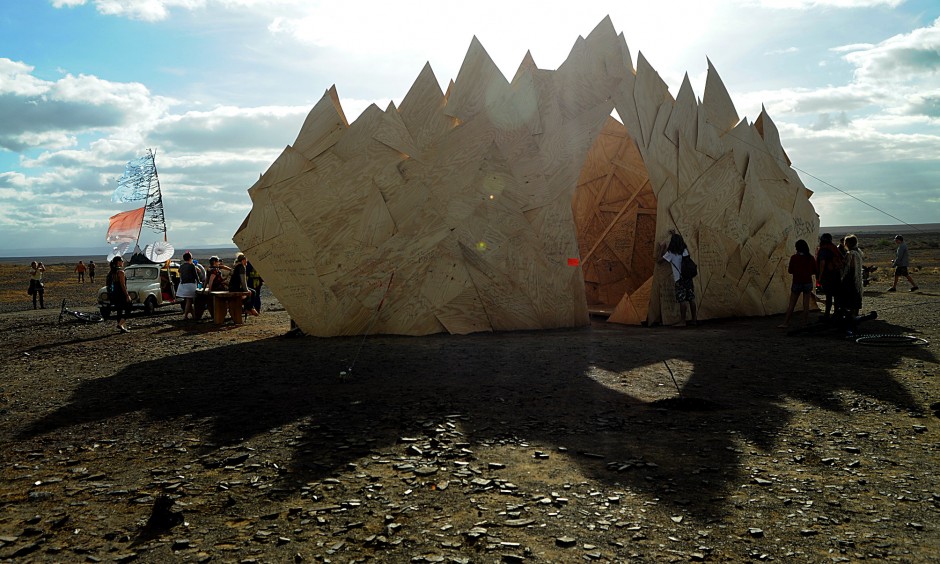 This is a sculpture made up of planks of wood, nailed together in somewhat of a hedgehog shape. It was later burnt, something that I missed. But on the inside, were inscriptions by its visitors, messages, personal and to the public. The messages were burnt, disappearing into the ether, along with the sculpture, satisfying the "we were here and we said this" expression side but the "leave no trace" side as well. 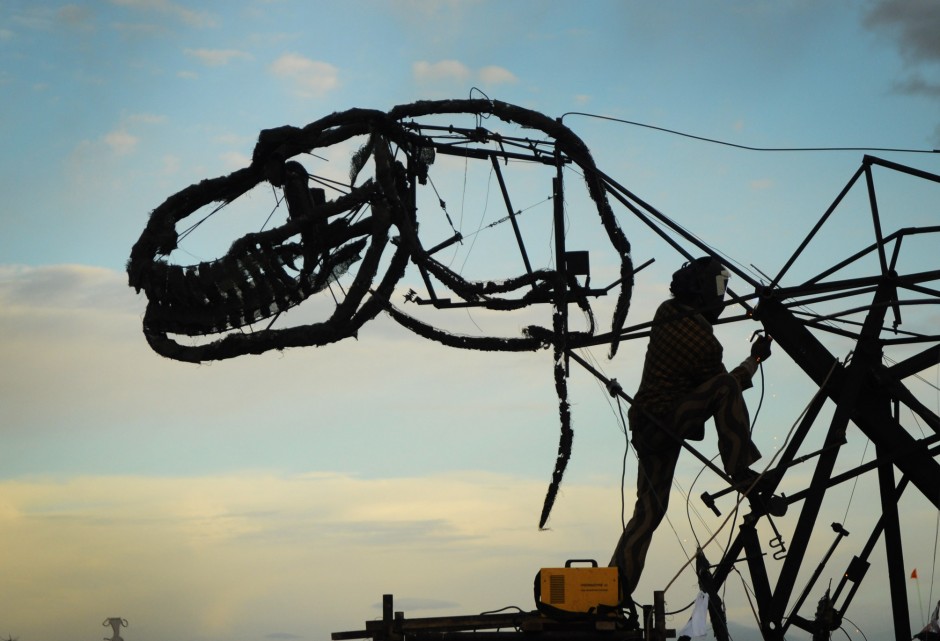 A mechanical Tyrannosaurus. The body is filled with pyrotechnics, and when set alight, burns with a dark night backdrop, a fiery glowing. Wet weather had forced the sculptors to re-do a lot, and the sculpture was only ready to perform on the last day. 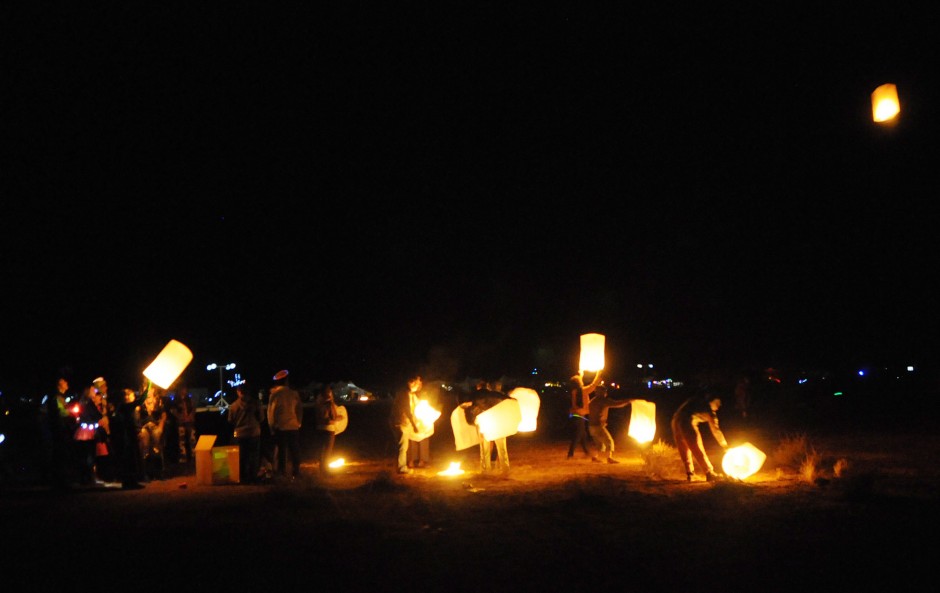 Bio-degradable and fun. These guys set these into the air for ages. I think they take quite a long time to take off, but once they do, the float for ages. 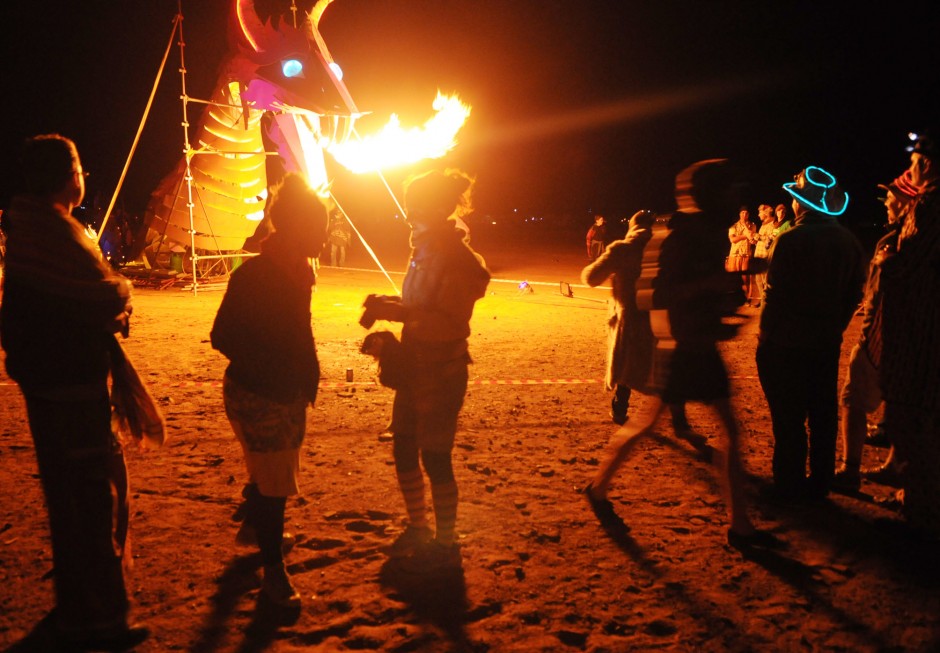 The dragon had a remote trigger that the artist carried around, and once pressed, the dragon spewed fire. Sometimes he would let people marvel for ages and then suddenly ignite the dragon, sending shadows everywhere. The pink skin and the blue eyes constantly on until in the morning, the thing looked quite dull in the daytime by comparison. 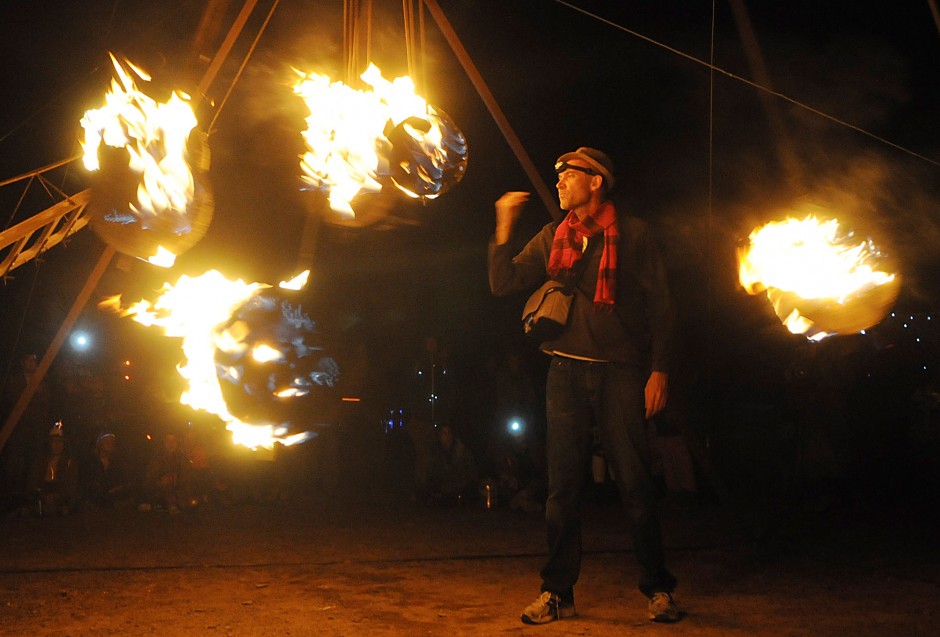 Naturally, with the name, a lot of things are burnt at AfrikaBurn including many of the sculptures. This man set the many discs of his on fire, suspended from a central rail, and pushed them so that they swung back and forth. 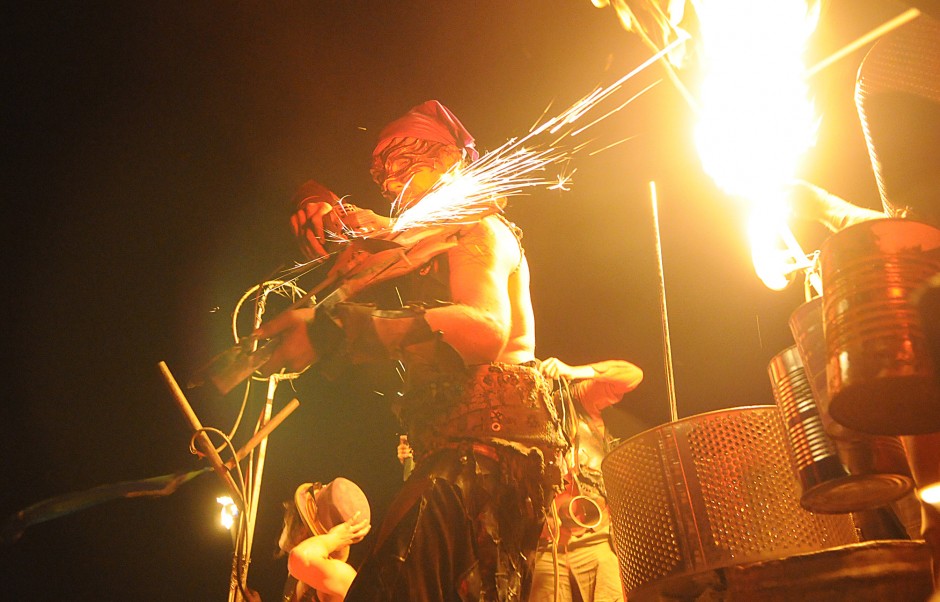 A man plays on a metal violin with an angle grinder to some music. There was a whole band of people igniting things, beating things, and sawing things, on the back of a truck, driving around, with the music, sparks flying and people running after it.